The dimensions were quirky enough as it was at Ebbets Field.

The former home of the Brooklyn Robins and Dodgers was aligned with the home run fence 382.83 feet to left, 466 feet to center and 296 feet to right field. A true-pull hitter from the right side of the plate would need to muscle up to clear the Ebbets Field wall on a fly. That is, of course, unless a hitter got a friendly bounce.

On Sept. 12, 1930, the unconventionally shaped ballpark that was home to World Series and pennant races played host to a different kind of historical moment.

With two on in the fourth inning, Robins catcher Al López – who was inducted into the National Baseball Hall of Fame as a manager in 1977 – roped the pitch of Cincinnati Reds pitcher Ray Kolp deep into the Ebbets Field alley. The ball hit the outfield grass and climbed over the left field wall. But instead of being awarded two bases, López’s modern day “book-rule double” was correctly called a home run. 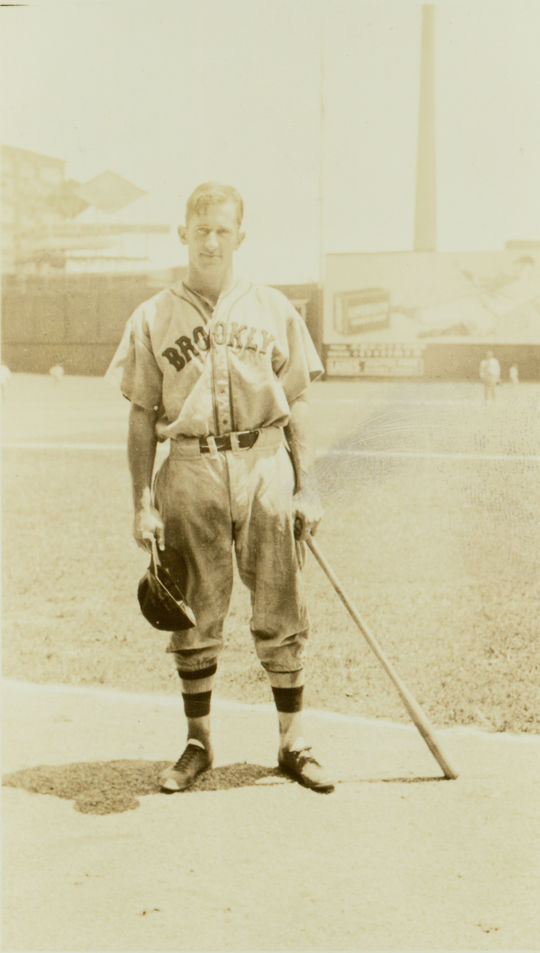 Al López began his professional baseball career with the Brooklyn Robins in 1928 at the age of 20. (National Baseball Hall of Fame and Museum)

López’s “bounce” home run was the last one ever recorded in Major League Baseball after the rule was changed in the National League following the 1930 season. The American League had already adopted the book-rule double prior to the 1929 campaign.

All home runs now had to clear the outfield wall on a fly. The ground-rule double, as it came to be known, would be called on hits like López’s where a ball bounces in fair territory and into the stands. Just like hitters, baserunners would automatically be awarded two bases on a ground-rule double.

Ironically enough, there has been some debate about the play’s terminology. While some unconditionally accepted the term, some announcers came up with what they believe is a more appropriate way to phrase the sequence.

The term “ground rule” is supposed to be associated with each individual ballpark, meaning different rules apply in different ballparks. The ground-rule double, however, is a league-wide rule that is enforced at every ballpark. Announcers have used the terms “bounce doubles,” “rulebook doubles” and “automatic doubles” to describe the play. Al López played for Brooklyn for seven seasons of his 19-year playing career. (National Baseball Hall of Fame and Museum) The Brooklyn Robins, and the Brooklyn Dodgers, played in Ebbets Field until 1958, when the franchise moved to Los Angeles. (National Baseball Hall of Fame and Museum)

One month after retiring, future Hall of Fame manager Al Lopez became the manager of the White Sox.