On Wednesday, August 16th at 1pm, the Hall of Fame will welcome author Ron Kaplan as he talks about his new book, Hank Greenberg in 1938: Hatred and Home Runs in the Shadow of War.

From his first day in the big leagues, Hank Greenberg dealt with persecution for being Jewish. The Hall of Famer always did his best to shut out the bigotry, but in 1938, that would prove more difficult then he could have imagined.

Author Ron Kaplan examines Greenberg’s 1938 season in incredible detail. While Greenberg was battling at the plate, the Jewish people overseas were dealing with a humanitarian crisis. Adolf Hitler had taken direct control of the country’s military in February of 1938 and then began a methodic takeover of all neighboring countries, spreading Nazism and the Holocaust.

Hank Greenberg in 1938 chronicles the events of 1938, both on the diamond and in the streets of Europe. As Greenberg took aim at Babe Ruth’s home run record, Hitler’s “Final Solution” was beginning to take shape. Jews across the United States, worried about the issues overseas, looked to Greenberg as a symbol of hope. Though normally hesitant to speak about the anti-Semitism he dealt with, Greenberg knew that he was batting for so many of his own people, particularly those living with life and death on the European continent. 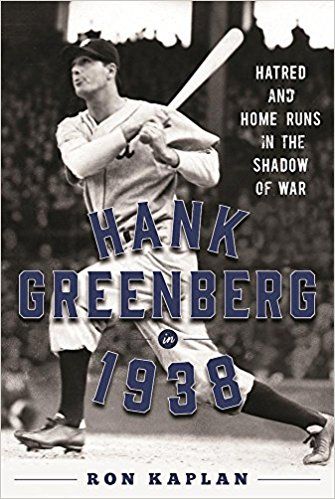 Hank Greenberg in 1938: Hatred and Home Runs in the Shadow of War by Ron Kaplan