As Major League Baseball celebrates the centennial of the founding of the Negro National League, C.C. Sabathia pays tribute to Negro Leagues baseball.

CC Sabathia stood on the shoulders of legends en route to 251 big league victories. A six-time All-Star and the 2007 American League Cy Young Award winner, Sabathia pitched for the Indians, Brewers and Yankees over a 19-year big league career that saw him post a record of 251-161 and 3,093 strikeouts before retiring following the 2019 season.

Sabathia will discuss how he became a fan of the Negro Leagues, his thoughts on the legendary Satchel Paige, and the reasons why it’s important for children and families to learn about the legacy of Negro Leagues baseball.

This program can be viewed on the Museum’s Facebook Page 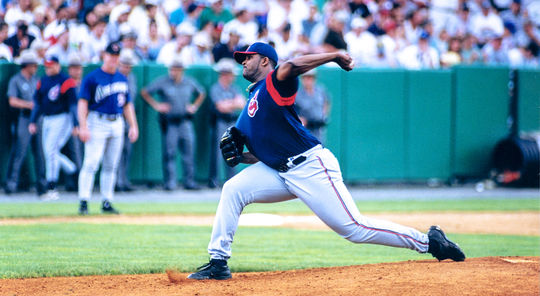 CC Sabathia delivers a pitch for the Indians during the Hall of Fame Game on July 24, 2000, against the Arizona Diamondbacks at Cooperstown's Doubleday Field. (Milo Stewart Jr./National Baseball Hall of Fame and Museum)