Skip to main content
IMPORTANT INFORMATION FOR YOUR VISIT

On Wednesday, July 4th at 1pm, the Hall of Fame will welcome author David Rapp to talk about his new book, Tinker to Evers to Chance: The Chicago Cubs and the Dawn of America.

Author David Rapp explores the careers of Hall of Famers Joe Tinker, Johnny Evers, and Frank Chance, who came together in rough-and-tumble early 20th century Chicago and formed the defensive core of the most formidable team in big league baseball. Led by the three infielders, the Chicago Cubs won four National League pennants and two World Series championships from 1906 to 1910. At the same time, baseball was transforming from small-time diversion into a nationwide sensation. Tinker to Evers to Chance examines this pivotal moment in American history, when baseball became the game we know today. 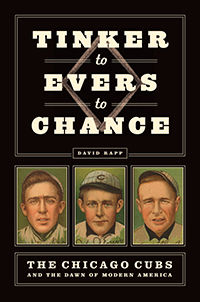 Tinker to Evers to Chance: The Chicago Cubs and the Dawn of America by David Rapp