Skip to main content
IMPORTANT INFORMATION FOR YOUR VISIT

On Wednesday, July 11th at 1pm, the Hall of Fame will welcome author Curt Smith to talk about his new book, the Presidents and the Pastime.

The latest from award-winning author Curt Smith chronicles the historical relationship between the most American of sports and the United States presidency. Drawing on Smith’s extensive background as a former White House presidential speechwriter, the book charts how baseball cemented its reputation as America’s pastime in the 19th century, when presidents Lincoln and Johnson played town ball and gave employees time off to watch.

Smith tracks every U.S. president from Theodore Roosevelt to Donald Trump. He tells of Wilson being buoyed by baseball after suffering disability, a heroic Franklin Delano Roosevelt saving baseball during World War II, Carter being taught the game by his mother Lillian, and Reagan broadcasting baseball on radio through the means of “re-creation.” 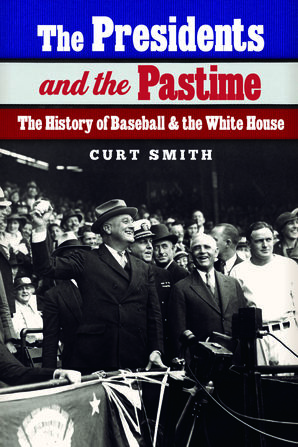 The Presidents and the Pastime by Curt Smith