Doubleday Field is renowned the world over, a recognizable name to baseball fans despite the fact that it’s nestled in the center of a village of only 2,000 inhabitants. But in Cooperstown it has remained, on what was once a cow pasture owned by Elihu Phinney, hallowed ground for more than eight decades.

To tell the story of Doubleday Field, one has to start with the Mills Commission, which was appointed in 1905 to determine the origin of baseball. Though the committee considered much evidence, the testimony of Abner Graves in support of Abner Doubleday figured prominently. Both Graves and Doubleday had attended school together in Cooperstown. In letters to the committee, Graves claimed to have been present when Doubleday made changes to a local version of "town ball."

The committee's final report, on Dec. 30, 1907, stated, in part, that "the first scheme for playing baseball, according to the best evidence obtainable to date, was devised by Abner Doubleday at Cooperstown, N.Y. in 1839." 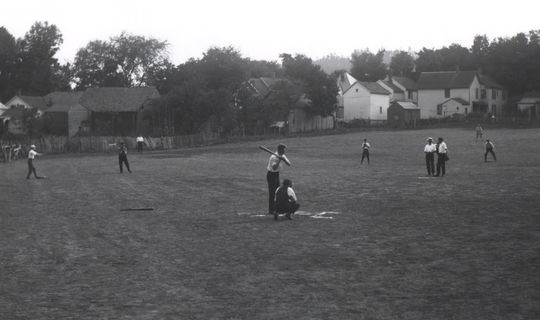 The citizens of Cooperstown appreciated the acclaim Doubleday had brought to their small village, but did not find a suitable way to acknowledge it for many years. When National League President John Tener came to Cooperstown in 1916, he visited the Phinney lot, a plot of ground once believed to have been used by Doubleday and other Cooperstown schoolboys to play the first game of baseball in 1839, and suggested that the cow pasture be turned into a memorial to Doubleday.

After the land in which the lone baseball field in Cooperstown stood was purchased in 1917 to build a hospital, Cooperstown residents began to think of the Phinney lot as a suitable replacement. On June 2, 1919, the Cooperstown Chamber of Commerce’s Playground Committee secured a lease from Alexander Phinney, the current owner of the lot, for the use of the grounds for two years with the option to buy it for the sum of $5,000. 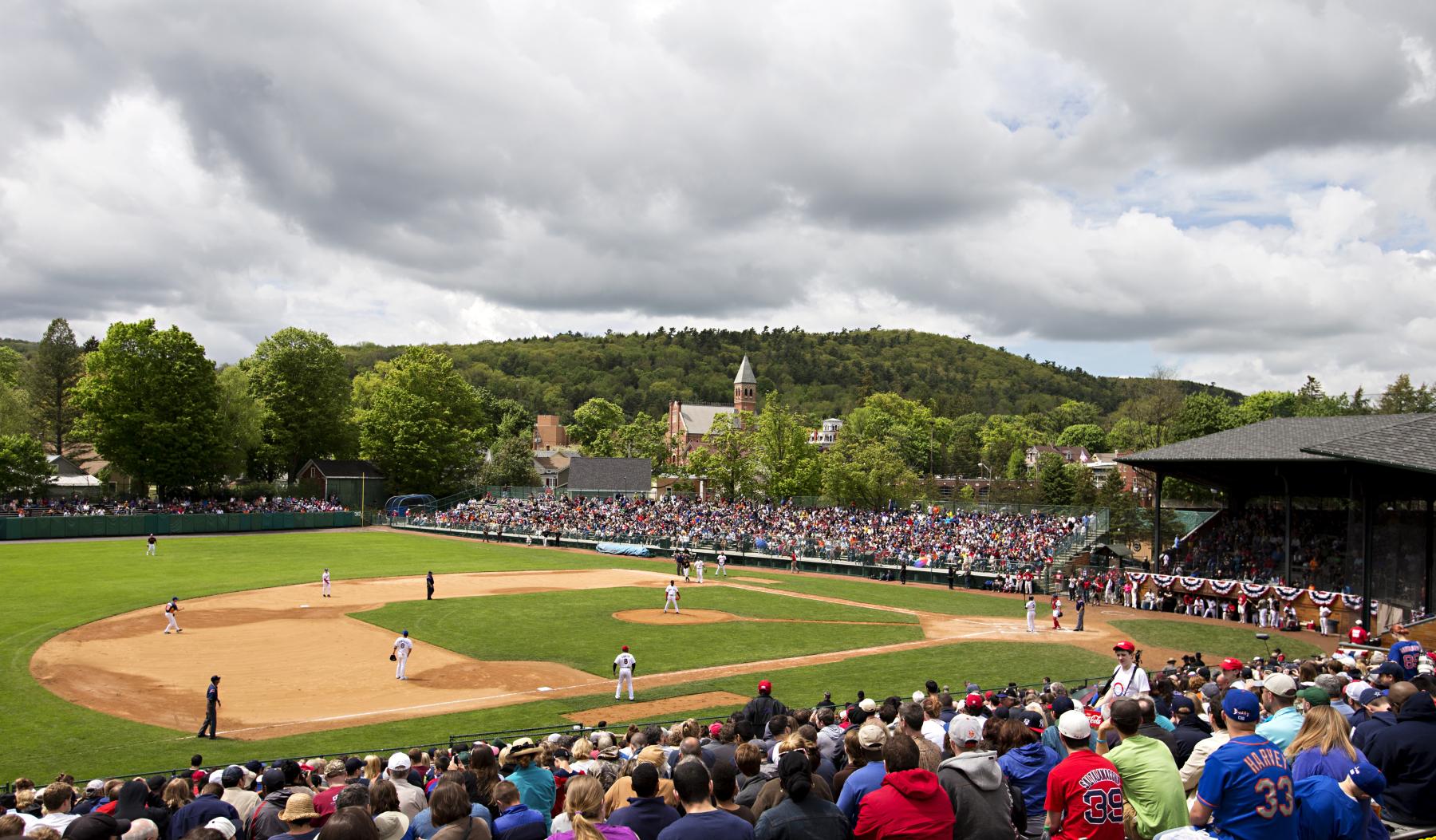 “The Playgrounds Committee of the Cooperstown Chamber of Commerce on Monday signed a lease for two years of the Phinney lot in this village for use as a baseball and playgrounds and thus the original baseball diamond of America will soon respond with the crack of the bat and ball,” the Cooperstown newspaper, The Freeman’s Journal, reported on June 4, 1919. “An appeal for volunteer labor will be made and the diamond placed in condition at once for games this summer.”

Soon the local citizens were leveling the field, with dirt and ashes used as filler on the swampy portions. On Sept. 6, 1920, Doubleday Field officially opened. The first game was between Milford and Cooperstown, and John Heydler, president of the National League, was present and umpired the first inning.

A vote in 1920 to buy the lot was turned down by the Cooperstown taxpayers, 204 to 151. With the lease set to expire, a fundraising effort to raise the $5,000 necessary to acquire the lot was led by Dr. Ernest L. Pitcher, a local dentist, and helped considerably by Dr. Harry L. Cruttenden, George H. Carley, Monroe F. Auger and Loren J. Gross.

The fundraising group was not only soliciting contributions, large and small, amongst its local denizens, but was reaching out to a wider audience. Even New York State Governor Alfred E. Smith was not immune.

In a letter dated Aug. 12, 1920, Governor Smith’s office replied, “The Governor has established a rule to decline all contributions because he does not possess sufficient funds to make these donations. In view of the fact that you ask only a dollar however, we will be very glad to send it, if you will agree not to use the Governor’s name; in other words if you want the dollar we will send it but because of the rule adopted we would not want you to advertise the contribution.”

The committee members signed a note for a $1,800 loan from the First National Bank to finance trips to New York to obtain national support for the project. This strategy seemed to work, as the Doubleday Field cause soon appeared in a number of national publications.

“For in striving to preserve Doubleday Field, Cooperstown is striving to preserve a memorial to baseball in which every lover of that game should feel a genuine interest. If Cooperstown, alone and unaided, can raise $3,000, does it not seem reasonable to suppose that all the rest of the great baseball community, the thousands – yes, millions of fans, who have derived wholesome pleasure from the pioneer efforts of Abner Doubleday, should step into the breach and assume responsibility for the needful balance of but $2,000?” it said in Baseball Magazine at the time.

The committee’s combined efforts raised $3,772, and in 1923, at a special election, the Cooperstown taxpayers authorized the purchase of the field by the village and appropriated the necessary funds. Title to Doubleday Field was officially transferred to the Village of Cooperstown by a Supreme Court order dated Sept. 29, 1923.

Spalding’s Official Baseball Guide editorialized in favor of the purchase: “From a sentimental standpoint, we hope that Cooperstown purchases the field if it is the will of the city to do so. If the town folks are without funds and do not feel that they can immediately afford to make a purchase, we hope that some way will be devised whereby the field can be secured and turned over to the city or to a memorial committee, or association, for permanent reservation.”

Even the Sporting News, the self-proclaimed “Base Ball Paper of the World,” editorially advocated on Nov. 29, 1923, that “it is a cause that will interest all lovers of baseball, and if every male citizen in the United States pays one-eighth of one percent of the debt he owes to Abner Doubleday the committee will be able to pave the outfield with blocks of 24-karat gold.”
A wooden grandstand was added in the spring of 1924, and taxpayers appropriated funds to enlarge the plot in March of 1926. In June of 1927 additional property was purchased for an entrance to the field.

In a letter dated October 13, 1926, Heydler writes, “I only hope that the people of Cooperstown will be able to hold on to this historic property. It may be years from now that professional baseball will honor itself by doing something to perpetuate this Doubleday Field, but I have faith that eventually something will be done. This, of course, is a personal expression and not official.”

Beginning in 1933, Doubleday activity was again seeing changes, as not only were additional parcels of land purchased to expand left field, which was short of regulation size, but under a Works Progress Administration (WPA) program the entire field was graded, a new diamond was constructed, the area was fenced in and the entrance was landscaped. On Aug. 3, 1934, Lt. Gov. M. William Bray of New York formally reopened the field. 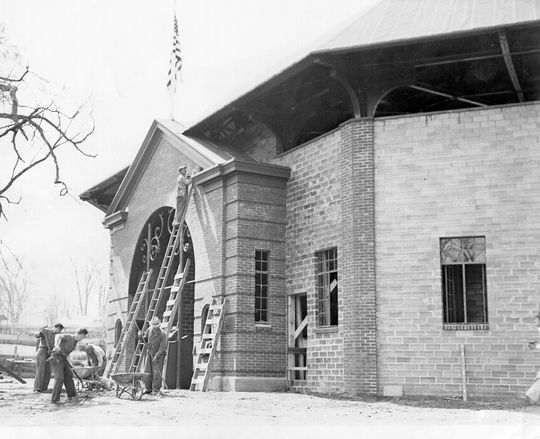 From 1938-39, a new grandstand and set of bleachers was built using funds from the Works Progress Administration to expand the seating capacity at Doubleday Field. The new ballpark was dedicated on May 6, 1939, just in time for Cooperstown’s baseball centennial celebration that summer (National Baseball Hall of Fame Library)

“Doubleday Field was reopened today as one of the finest playing grounds in Eastern New York. Neglected for several years past because of lack of maintenance funds, the field has been remodeled as a work relief project at an expenditure of $10,000,” the Associated Press reported on Aug. 5, 1934.

Cooperstown would be the setting for a summer-long series of events in 1939 in celebration of the centennial of the birth of baseball in the village a hundred years before, which would also include the official dedication of the National Baseball Hall of Fame and Museum. In preparation for the numerous events it would be hosting, Doubleday Field, thanks to another WPA program, underwent a facelift beginning in 1938, which included building a steel and concrete grandstand, installing new wooden bleachers, seeding the field, laying a drainage system, setting out a new board fence for the outfield and constructing stone masonry for the rest of the facility. This work would give the field a seating capacity of nearly 10,000.

Amazingly, the work on Doubleday Field was completed on the morning of May 6, 1939, the opening day of the Cooperstown Baseball Centennial. The first contest, which featured two upstate New York high schools, was only the first of more than a dozen the field hosted that summer. Most notable among these was an All-Star game on June 12, after the first Hall of Fame induction ceremony, that featured ballplayers from every big league team. 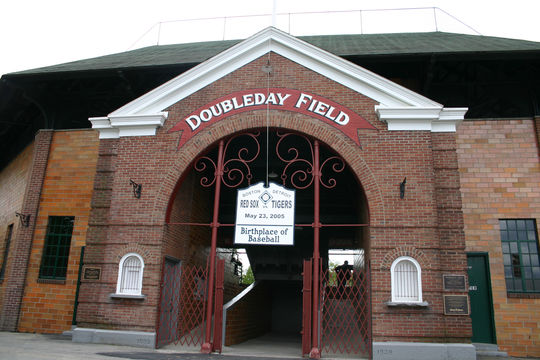 Cooperstown’s Doubleday Field hosted two MLB teams for an exhibition known as the Hall of Fame Game each year from 1940-2008. The event was replaced by the Hall of Fame Classic in 2009 (Milo Stewart, Jr. / National Baseball Hall of Fame)

The 1939 All-Star game proved such a success that it prompted discussions of future tilts that would bring crowds back to Cooperstown for subsequent summers. Starting in 1940, the hugely popular Hall of Fame Game, an in-season exhibition between two major league teams, would become an annual event that would see such stars as Ted Williams, Mickey Mantle and Hank Aaron homer in the hitter-friendly confines (dimensions – 296 feet to left field, 336 feet to left center, 390 feet to center field, 350 feet to right center, 312 feet right field). 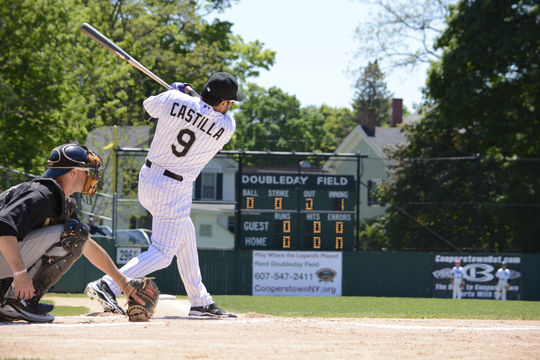 Former Colorado Rockies third baseman Vinny Castilla launches a home run toward the Doubleday Field scoreboard during the Home Run Derby as part of the 2015 Hall of Fame Classic on May 23, 2015 in Cooperstown, NY (Milo Stewart, Jr. / National Baseball Hall of Fame)

“My congratulations upon the progress that has been made in liquidating the debt incurred by your village in the construction of Doubleday Field. For a village of 3,000 people, that is an accomplishment,” Landis wrote. “Baseball understands that through the Shrine Games (i.e. Hall of Fame games) played by Major League teams a material contribution has been made toward clearing that debt. It, therefore, will be very agreeable to the Major Leagues if the entire proceeds of the 1942 game are turned over to the village toward completion of the payment of the Doubleday Field debt.”

While Doubleday Field was playing host to mostly area youth, things changed in 1942, when World War II forced a minor league team, the Quebec Athletics of the Canadian-American League, to use it for spring training. Over the years the park has been the site of football games, concerts and community events.

In 1959, the first base section of the stands was donated by Thomas Yawkey, owner of the Boston Red Sox at the time. Doubleday Field has seen other changes, including new sections having replaced the old uncovered stands, where only the grandstand remains from when the refurbished park opened in 1939. 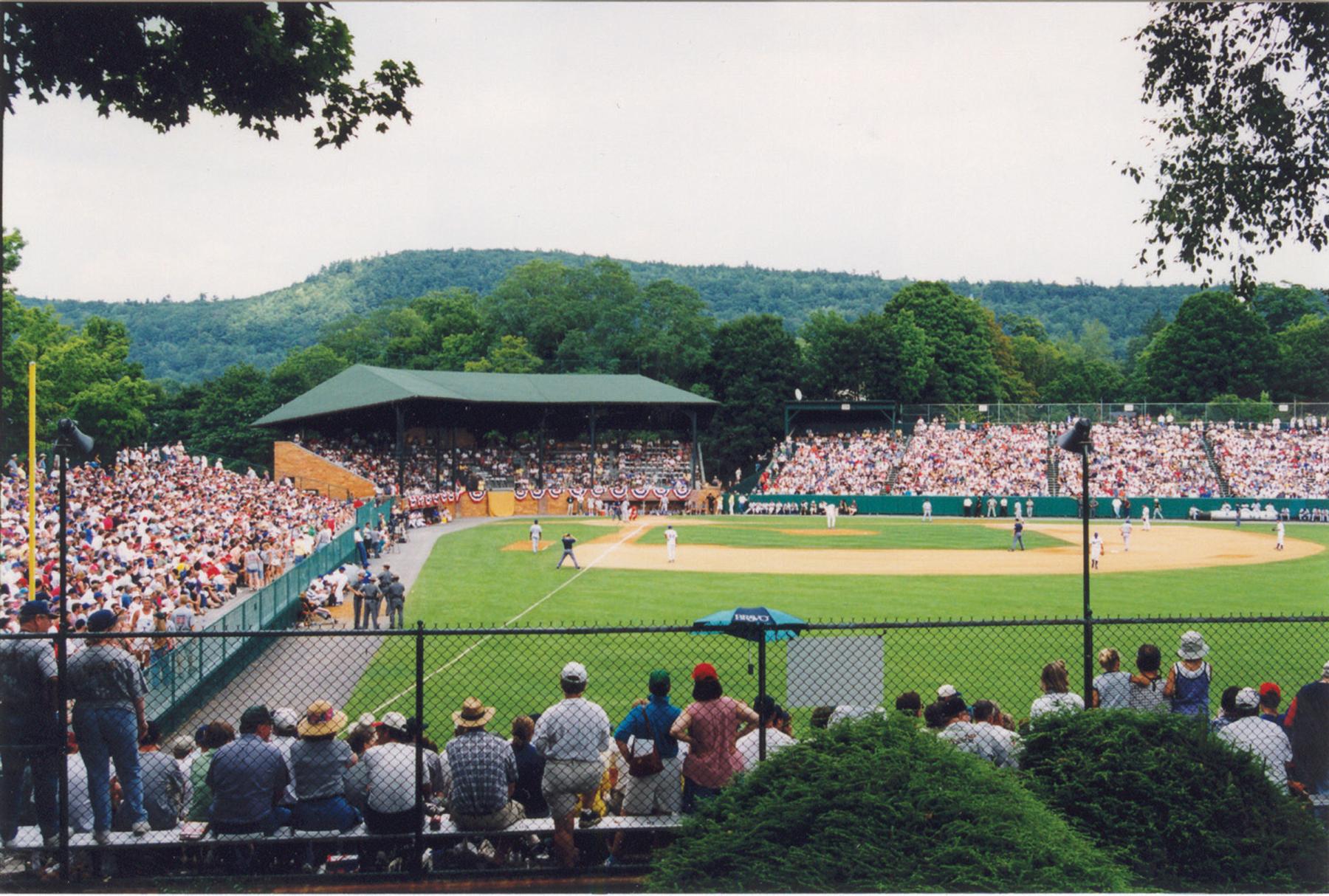 Each year, thousands of baseball fans fill the stands at Cooperstown’s Doubleday Field to watch their favorite past and present major league players participate in an exhibition game. Doubleday hosted the Hall of Fame Game from 1939-2008, followed by the Hall of Fame Classic from 2009-present (Milo Stewart, Jr. / National Baseball Hall of Fame)

Today, the fabled 9,791-seat ball field, situated between Susquehanna, Pioneer, Elm and Main streets, surrounded in its idyllic setting with quaint houses and majestic trees, is not only a destination for baseball fans, but baseball teams from around the country.

Owned and operated by the village of Cooperstown, Doubleday Field will play host to more than 350 baseball games this year, ranging from youth baseball to high school and collegiate tournaments to senior leagues.

Bill Francis is a Library Associate at the National Baseball Hall of Fame and Museum.