Mark Littell has enjoyed much success in life as a ballplayer, pitching coach and author, but may be most remembered as an opposing pitcher that delivered a pitch that will forever live in Yankees lore.

Littell, who had a nine-year big league career spent mainly as a reliever split between the Royals (1973, 1975-77) and the Cardinals (1978-82), was in Cooperstown as part of the National Baseball Hall of Fame and Museum’s Author Series in the Bullpen Theater on the afternoon of July 25.

Speaking in front of a rapt audience, Littell, sporting a World Series ring from his time with the 1982 Cardinals, told descriptive and funny stories from his book “On the Eighth Day, God Made Baseball”, published in 2016.

“People had said to me you need to write a book. So I sat down one cold winter and started writing. The book is written in my tone of voice,” said the 65-year-old Littell, who grew up on a cotton and soybean farm in southeast Missouri and was nicknamed “Country” throughout his playing days. “The book starts at age six. There’s a lot of funny stories. And unfortunately, the book is all true stories.

“The reaction to the book has been really good. People can’t believe I wrote it. What I hope readers come away with is there’s a humorous side to what we do on the field, in the dugout and in the clubhouse.”

Littell, a hard-throwing righty, saved at least 10 games every season from 1976 to ’79, ending his career with a total of 56. After elbow injuries ended his playing career at the age of 29, he went on to a long career as a minor league pitching coach. But his claim to fame is the result of a dramatic hit he gave up. 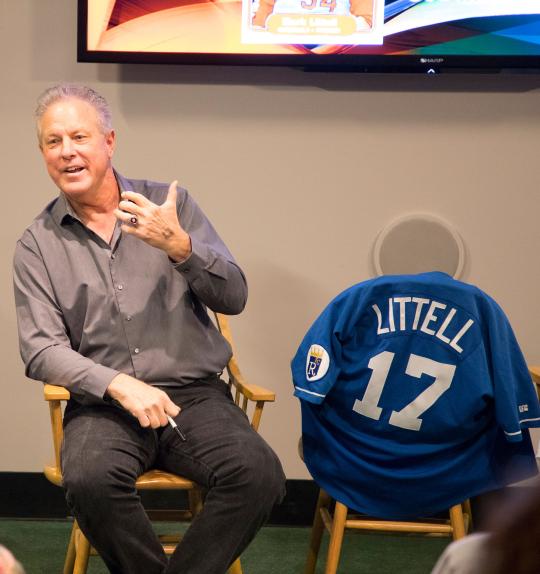 Mark Littell pitched nine seasons in the big leagues, and won a World Series with the Cardinals in 1982. (Milo Stewart Jr./National Baseball Hall of Fame and Museum) 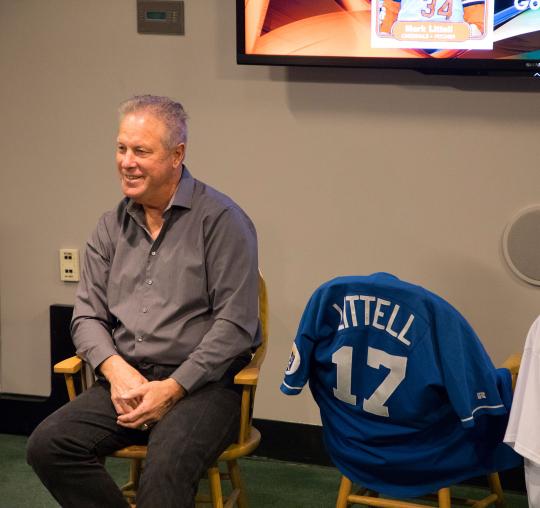 Mark Littell has enjoyed success as a pitcher, pitching coach and author throughout his career. (Milo Stewart Jr./National Baseball Hall of Fame and Museum)

Facing the Yankees’ Chris Chambliss in the fifth and deciding game of the 1976 American League Championship Series, Littell served up a first-pitch, bottom of the ninth inning walkoff homer to the lefty-swinging slugger. With the 7-6 win, the Yankees would be appearing their first World Series in a dozen years.

“I was only asked about it three times today,” Littell joked when asked again about the famed homer he gave up. “It was cold that night in Yankee Stadium. In the ninth inning I was warming up and threw four or five pitches. I turned around and my outfielders have their numbers to me and they’re backed away from the wall because there’s all kinds of stuff being thrown down on them. It was pretty nasty.

“So I stopped and crossed my arms. I motioned catcher Buck Martinez out and asked him, ‘Do you think we should get out of here?’ About a minute and a half later I throw a few more warmups. Actually, the pitch he hit was a ball if you look at it. But it went out by a few feet over a leaping attempt by right fielder Hal McRae. There’s really no excuses. Afterwards, my team was trying to make me feel good. I had a really good year. But I had only given up one home run the whole year, so the last thing on my mind was me giving up a home run in that situation.”

The game was delayed at the start of the bottom of the ninth while the ground crew cleaned up debris thrown onto the field. And after Chambliss’ homer, fans stormed the field as he attempted to round the bases.

“It was amazing because I turned around and watched the home run. Then I saw the fans coming on the field,” Littell remembered. “I was just stepping onto the grass from the mound and there were people already up on the mound. But nobody touched me.

“I went to the dugout and somebody took me by the arm to the clubhouse. I went directly back to the shower in my uniform, turned the shower on, and put my head under it. I walked right to the shower – I didn’t want to be around anybody. Players like Amos Otis and Dave Nelson, pitching coach Galen Cisco and manager Whitey Herzog tried to help me through hit. That’s probably the worst feeling you’ll ever have. They were probably concerned whether this 23-year-old kid would be able to recover.”

Littell did recover and was able to play with future Hall of Famers such as George Brett, Lou Brock, Bruce Sutter and Ozzie Smith, as well as under manager Whitey Herzog in both St. Louis and Kansas City. 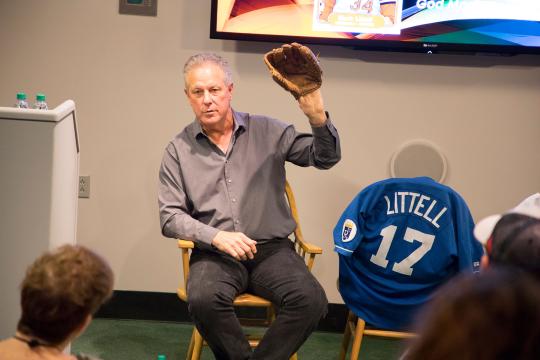 Mark Littell wrote the book "On the Eighth Day, God Made Baseball", which was published in 2016. (Milo Stewart Jr./National Baseball Hall of Fame and Museum)

“Whitey was ingenious the way he managed,” Littell said. “He was usually two or three or four innings ahead of the opposing manager. I very much enjoyed playing for him. He was my favorite manager. He would only talk to the players a few times a season, but when he did you listened with wide open ears.”

Asked to summarize his own playing career, Littell called it “wonderful.”

“You can’t replace the camaraderie on the field, in the clubhouse, on the bench, on the bus, on the plane, and off the field. And I think that’s what everybody else might say, too. It’s the biggest party you’ll ever see,” he said. “There’s one thing in baseball: if you’re not humble you will be humbled. That’s a very important fact. So try not to be too high or too low, but stay in the middle. Or at least try to.”