He joined baseball’s greatest team in 2002, and ever since Ozzie Smith has brought his electric smile and infectious enthusiasm to Hall of Fame Weekend.

And along the way, Ozzie and his Hall of Fame friends have provided unceasing support for the Museum’s Education Program through PLAY Ball.

Smith, the Education Ambassador for the National Baseball Hall of Fame and Museum, hosts PLAY Ball annually on the Friday of Hall of Fame Weekend. Over the years, The Wizard has brought dozens of his fellow Hall of Famers to the event, providing participants with an unforgettable morning filled with on-field moments and stories with Hall of Famers.

PLAY Ball is a Museum fundraiser that supports the Hall of Fame’s educational mission and the Ozzie Smith Diversity Scholarships for the Museum’s Frank and Peggy Steele Internship Program for Youth Leadership Development. Since 2002, the program has raised more than $200,000 for the Museum’s initiatives. 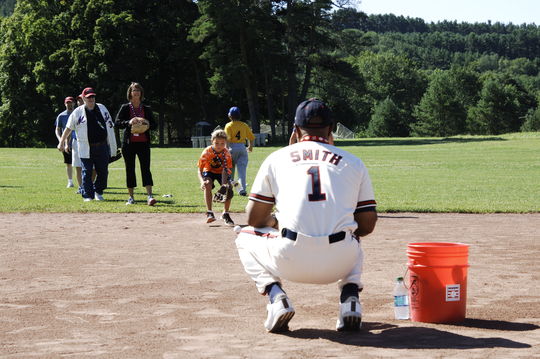 Participants in PLAY Ball each receive on-field round-robin interaction with the Hall of Famers along with special mementos to commemorate their experience.

The event will begin with an exclusive morning reception in the Hall of Fame Plaque Gallery with Ozzie and his Hall of Fame friends. Following photos, stories and interaction with their Hall of Fame guides, PLAY Ball participants will hit the field at a Cooperstown-area diamond, where they will receive two hours of instruction along with non-stop interaction from some of the greatest players the game has known.

Reservations are required for PLAY Ball. Event pricing is $750 for participants in the Museum’s Membership Program, $1,000 for non-Members.