In the 1942 film The Pride of the Yankees, actress Teresa Wright, portraying Eleanor Gehrig, is depicted meticulously pasting articles and photos of her husband, Hall of Famer Lou Gehrig, in a large prop scrapbook.

One does not realize exactly how meticulous the real Eleanor was until viewing the actual scrapbooks, located in the archives of the A. Bartlett Giamatti Research Center at the National Baseball Hall and Fame and Museum.

In her memoir, My Luke and I, Eleanor recalled, “They are so huge that I have to open them on the floor to get a good look. Mrs. Gehrig [Lou Gehrig’s mother] used to stuff Lou’s early newspaper clippings into a drawer, and it took me almost a year to straighten them out.” 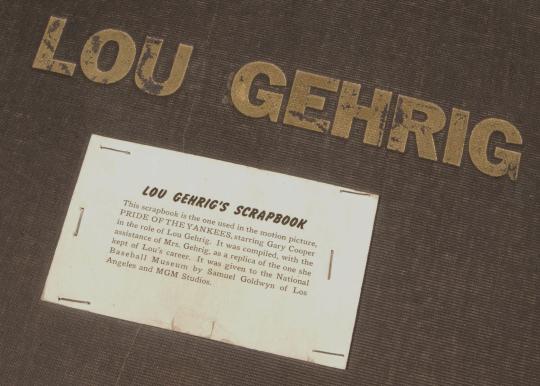 "[. . . the scrapbooks] helped in the successful production of the picture.”

Indeed, the four large scrapbooks are 18 inches wide by 24 inches long and contain over 900 newspaper and magazine articles, in addition to numerous personal photographs, letters, and telegrams. They cover every aspect of Gehrig’s career, from his exploits as a high school athlete through the production of The Pride of the Yankees, one year after his passing in 1941.

Scholars Susan Tucker, Katherine Ott, and Patricia Buckler described scrapbooks as “a material manifestation of memory – the memory of the compiler and the memory of the cultural moment in which they were made.” What makes scrapbooks unique are that they are “created and kept in private, for a limited few to see…[they] represent a mass-cultural form, but individually each is unique, authentic, and not easily reproducible.” And when a private scrapbook chronicles the life of one of the greatest players in major league history, its availability to the general public is certainly noteworthy. 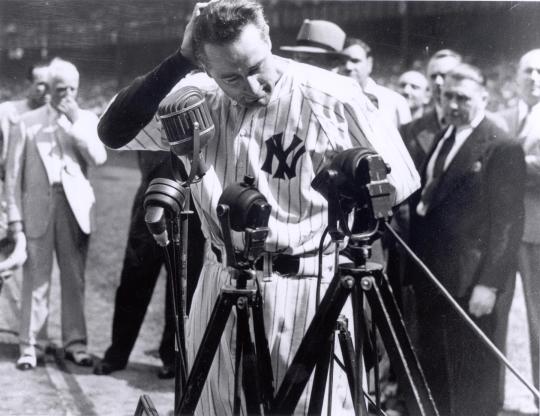 The scrapbooks serve as an apt reminder of not only his remarkable career, but also of his wife’s painstaking effort to create a memento of their public life together.

An article from 1937 portrays the couple viewing one of the scrapbooks, and explained, “Winter time is play time for Gehrig, but also time to clean up those odd jobs that accumulate through the year. One is bringing the Gehrig scrap book [sic] up-to-date. Charming Mrs. Gehrig has gathered plenty of materials about her famous spouse and this is the time of the year when the paste pot and the shears are brought out and Lou’s historic American League baseball exploits are presented for the future.”

That the artifact evolved from a private souvenir to – in essence – a eulogy in scrapbook form, adds to the poignant tale of Lou and Eleanor Gehrig.

Soon after Gehrig’s death, the scrapbooks were sent to Los Angeles to assist in the preparation of the script for The Pride of the Yankees. In a letter dated June 9, 1942, Christy Walsh, Gehrig’s agent, wrote to Eleanor, “The scrap books [sic] also appear to be in good order, allowing for certain unavoidable wear and tear due to the fact that the books were frequently used for reference by [story writer] Paul Gallico and other Studio departments.” He also noted that the scrapbooks “helped in the successful production of the picture.” 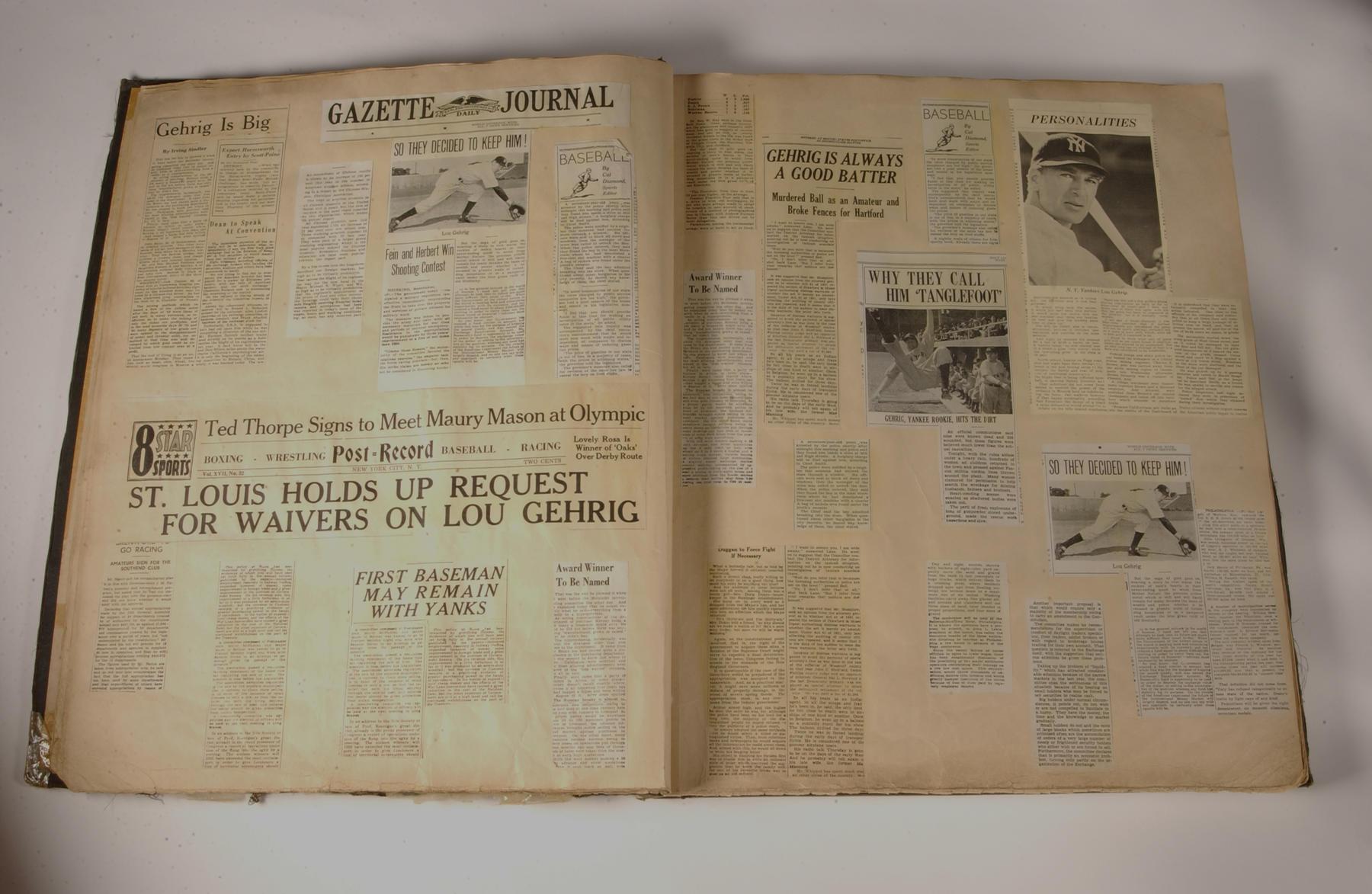 Fourteen years later, on Nov. 7, 1956, the scrapbooks were accepted by the Hall of Fame as a donation from Eleanor, along with numerous other items, including the last glove worn by Gehrig as a player, his last road uniform, and his right baseball shoe. Sid C. Keener, then the Director of the Hall of Fame, wrote Eleanor on Nov. 30, 1956, “Your gracious donation of Lou’s mementos is deeply appreciated by the National Baseball Hall of Fame and Museum, Inc. A special display of some of the memorable relics will be arranged shortly, on a tentative basis, because it is our desire to exhibit as many of the souvenirs as possible later on.”

After several decades of use, it had become apparent the deteriorating condition of the scrapbooks warranted further attention. In the fall of 2005, the two scrapbooks were sent to the Northeast Document Conservation Center in Andover, Mass., and separated into four large “books,” and a smaller volume comprised of 13 loose pages. Among the notes from the preservationists were descriptions such as, “The full cloth binding had no spine,” the “support leaves were dirty, discolored, and acidic,” and the “photographs were cockled and beginning to detach from the leaves.” In order to remedy some of the problems, the tears “were mended where necessary with Japanese kozo paper and wheat starch paste,” and the “support pages and scraps were dry cleaned where necessary.” The volumes were also microfilmed and each page was sealed with a plastic laminate, ensuring their preservation for viewing by future generations.

The articles in the scrapbooks reflect the changing media perception of Gehrig, from a great baseball player, to a great man, role model, and eventually husband, who faced death with dignity and courage. The articles also reflect the nature of the relationship between Gehrig and the New York City journalists who covered him. There was a closeness and mutual respect rarely seen in sports journalism. There were occasional criticisms, especially during salary negotiations with Yankee ownership and when the effects of his illness resulted in poor performance during the 1939 spring training. But overall, the articles demonstrate that Gehrig was one of the most beloved and admired athletes of the era. As one columnist wrote, “…his character and courage in the face of adversity earn him a place in the affections of the public.”

In an age when memories are increasingly stored in digital form, it is at times moving to examine such a personal artifact created of paper and paste. And because of the fame and historical significance of both the creator and subject, there is something in the scrapbooks for various audiences: 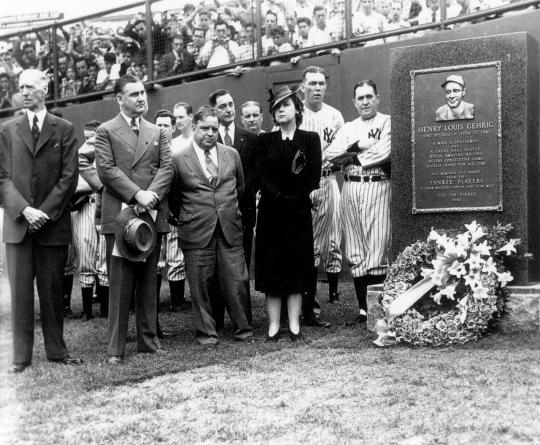 July 6, 1941, unveiling the Lou Gehrig monument at Yankee Stadium in New York. The scheduled date to honor the Iron Horse was July 4, 1941, but the game against the Senators was rained out. The Yankees played the Athletics on the 5th, but the unveiling of the monument was held on July 6th. 460.75_Gehrig_NBL (National Baseball Hall of Fame Library)

• For fans of Lou Gehrig, even avid ones, there are numerous unique tidbits contained in the articles. For example, in a New York Daily News article dated May 3, 1939, columnist Jimmy Powers wrote, “…Lou is only 35. He is rich. He is blessed with a beautiful wife. His reflexes have slowed a trifle. He cannot get the jump on ground balls. And his eyes don’t focus curves or fast ones as well as they used to. But otherwise he is all right. As the fortunes of men go, Lou is one of the luckiest men in the world.” The last line echoed the exact sentiment of Gehrig’s farewell speech, given two months later.

• For those wishing to further explore the nature of the relationship between Lou and Eleanor, the selection and placement of the articles and photos reflect their lives as seen through Eleanor’s eyes.

• The last article on the last page of the scrapbooks is a short clipping from the New York Times dated April 22, 1943, which reported, “The scrapbook of the great Yankee first baseman, used in preparing the film ‘The Pride of the Yankees’ has been presented to the museum by [film producer] Samuel Goldwyn. It is a duplicate of that which Mrs. Gehrig kept during the career of her famous husband.”