What was to be the final Hall of Fame Game – scheduled for June 16, 2008 – was canceled due to inclement weather when a thunderstorm rolled through Doubleday Field just prior to first pitch.

The San Diego Padres and Chicago Cubs were set to play before the weather deteriorated.

A total of 61 Hall of Fame Games were played, with the first game coming in 1940 between the Red Sox and Cubs. Originally a contest between an American League team and a National League team that was played on the day of the annual Hall of Fame Induction Ceremony, several changes were instituted over the years. Starting in 1986, the traditional interleague match-up was amended to allow teams from the same leagues to meet.

Then in 2003, the game was moved away from Hall of Fame Weekend to help alleviate scheduling issues.

The 1989 game between the Red Sox and the Reds was canceled when the Reds team plane had mechanical problems and was unable to fly. Instead, the Red Sox played an intersquad game at Doubleday Field.

In games between American League and National League teams, the AL won the series 27-22 with five ties.

The White Sox made the most appearances in Hall of Fame Games that were played, appearing nine times. 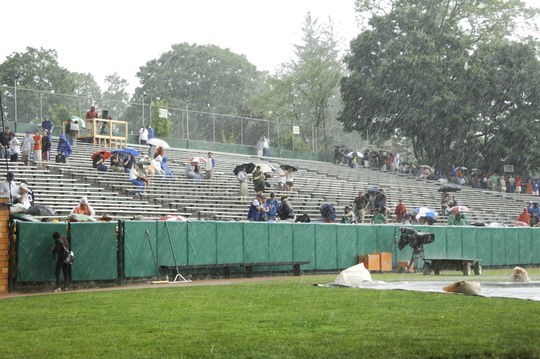 Rain pours down on fans sitting in the bleachers of Doubleday Field at the final Hall of Fame Game on June 16, 2008. (Milo Stewart Jr./National Baseball Hall of Fame and Museum) 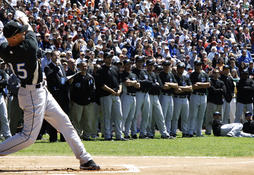 The Orioles defeated the Blue Jays in what turned out to be the final Hall of Fame Game ever played.