A Field of Dreams in the Arizona Desert

The Gila River Indian Community of Arizona has a land area of 583.749 square miles. Sandwiched between the San Tan Mountains to its North and the Sierra Estrella Mountains to its West, the community’s arid land goes on as far as the eye can see, marked by sagebrush, cactus and greasewood. Today, it has a population just above 11,000 people.

But in 1942, Gila River quickly became home to Arizona’s third largest city – and one of its most important ballparks. And a piece of that history is now preserved at the Hall of Fame.

On Feb. 19, 1942, President Franklin D. Roosevelt issued Executive Order 9066, thereby forcing thousands of Japanese-Americans to sell their belongings and move into one of 10 relocation centers across the country. Although about 70 percent of those interned were American citizens, xenophobic sentiment was rising in the United States after the Japanese attack on Pearl Harbor, and drastic measures were taken.

Surrounded by barbed wire, a watchtower and barracks, life at Gila River Internment Camp was far from comfortable. Internees complained that there was nothing to do all day, and they often grew exhausted from living in the stifling heat of the desert. But while some saw Gila River as a barren wasteland, Kenichi Zenimura saw a field of dreams.

Zenimura, who was born in Hiroshima in 1900, spent the majority of his childhood in Hawaii. At the age of 20, he moved to Fresno, Calif., where he made it his mission to foster the Japanese-American baseball scene there. Zenimura joined the Fresno Athletic Club, and as player/captain he organized games between his team and Negro Leagues clubs, Pacific Coast Leagues clubs, California Winter League clubs and even an exhibition match against Lou Gehrig and Babe Ruth during their 1927 barnstorming tour.

But despite his success as a proponent of the game, it was in Fresno that Kenichi Zenimura learned a vital lesson – one he would carry with him to Gila River. 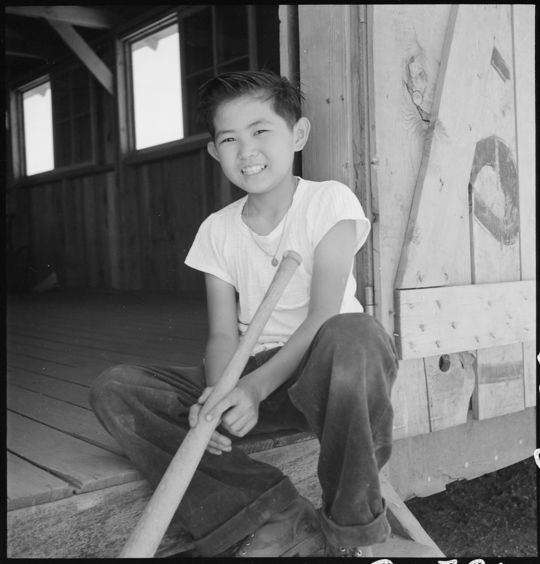 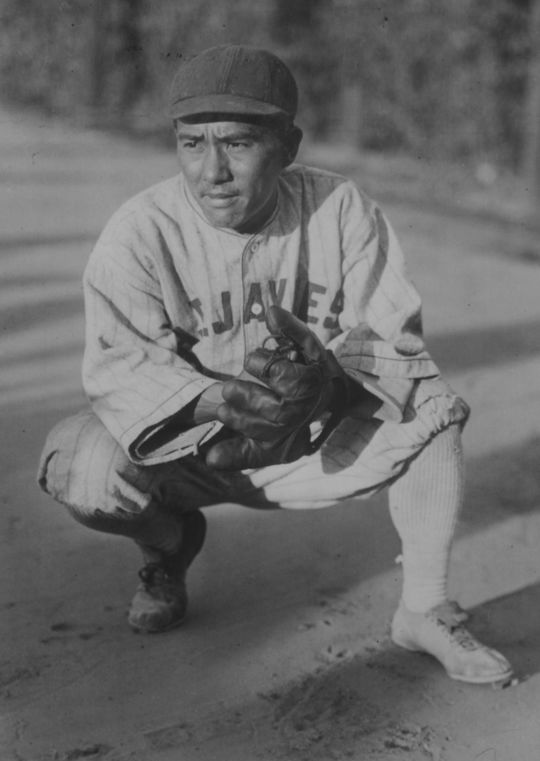 Kenichi Zenimura, pictured above, constructed three ballparks during his lifetime: the Fresno Japanese Ballpark in 1925, the Fresno Assembly Center in 1942, and Zenimura Field in Arizona in 1943. (Bill Staples Jr. / Nisei Baseball Research Project)

“Some time ago, back in a California town called Livingston, there appeared huge signs of billboard proportion: “No Japs Wanted,” he wrote in the Gila News Courier, the camp’s newspaper. “It was quite some time ago. At any rate, someone, somehow, arranged a game between the Fresno Japanese Baseball Club and a team owned by the big shot of that town called Livingston. The Japanese nine put together enough guts and made the trip – trying especially hard to play clean ball. Soon there were return games and soon enough – sure enough – the signs disappeared. MORAL: The sentiment around Phoenix never was too good for us; it’s worth trying here.”

Personally witnessing baseball’s ability to bridge cultural barriers, it should come as no surprise that two weeks after Zenimura showed up at Gila River in 1942, he began constructing a baseball field. 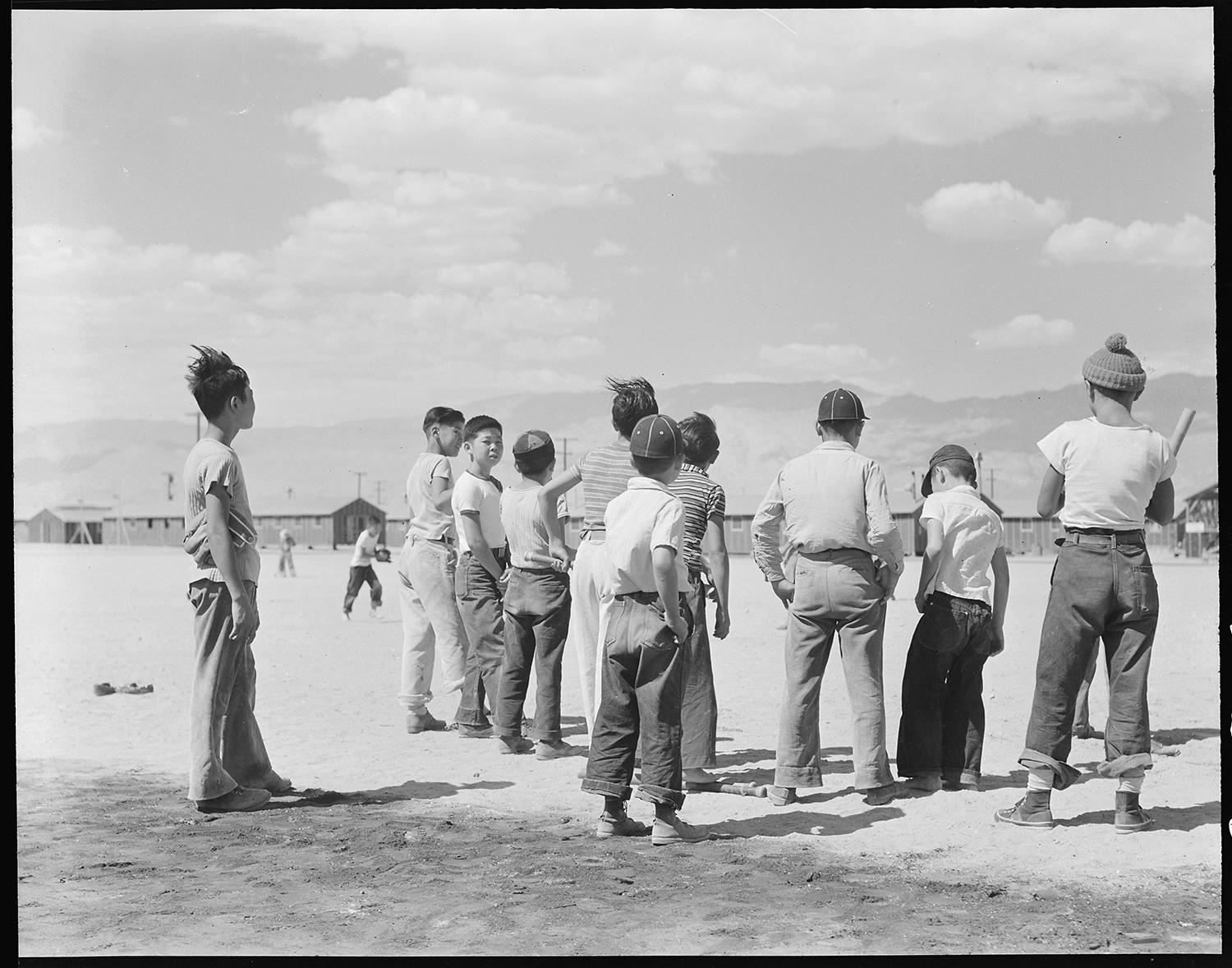 There were baseball fields at all 10 of the relocation centers during World War II, including Manzanar, pictured above. (Dorothea Lange / Courtesy of the National Archives and Records Administration)

“Guys from the other blocks asked, ‘What are you doing’?” said Howard Zenimura, son of Kenichi, in an interview with Sports Illustrated. “Pretty soon all these people were coming with shovels, helping to clear the area. We piled up the brush and burned it, and my dad somehow got a bulldozer to level the ground. Then we flooded it to pack the ground down.”

With only two suitcases to their name, the Zenimuras had to be resourceful – and clandestine – as this project had not yet been approved by camp officials. But Kenichi knew that his field would not only improve camp sentiment, but also help improve relations between the internees and the outside world. It wasn’t just for recreation; this field was a necessity.

“Using picks and shovels, the workers created two dugouts,” Howard said to Sports Illustrated. “They framed these with wood “borrowed” from a lumberyard during night time forays. They also used the stolen wood to construct a small grandstand, which even had a reserved-seat section.”

When camp officials began constructing a barbed wire fence around Gila River, Zenimura took poles from the construction site to use for support beams. The base lines were made of flour, while bags of rice marked the bases. A tin coffee cup stood outside of the park to raise funds for better equipment. Uniforms were made of mattress fabric. The outfield was made of castor plants – which soon grew to be seven feet tall – and stretched from foul pole to foul pole. Balls hit over them were home runs, and through them were doubles. The pitching rubber and home plate were made of wood. 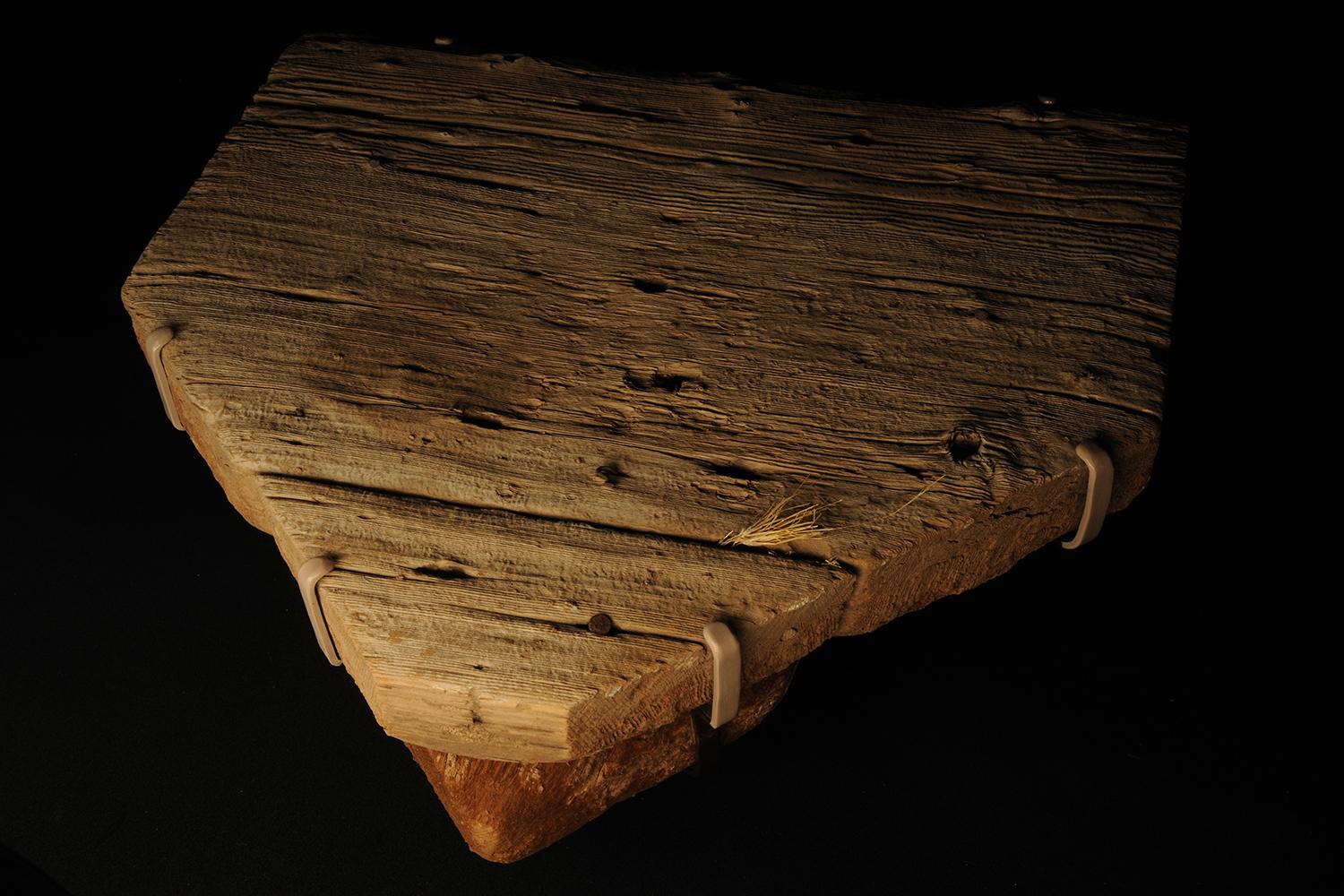 Zenimura quickly raised enough money to order better equipment from a sporting goods store in Fresno. The Gila River residents even grew Bermuda grass in the outfield, creating a diversion ditch so water would flow from a canal on the other side of camp. By March 7, 1943, with thousands of residents in attendance, Zenimura Field saw its first game – an 8-0 one-hit shutout by Block 28 (Zenimura’s club) against a local team from Guadalupe. Camp Director Leroy Bennett threw out the first pitch.

“The teenagers and the adults would gather every night to watch the games,” said actor Pat Morita to Sports Illustrated. “I had never seen a live baseball game before so this was my introduction to baseball—sitting and cheering with a couple of thousands rabid fans.”

Zenimura had organized a 32-team league, broken down into three divisions, sorted by experience level. Among the area teams who also played there were the Phoenix Colored Nine, the Phoenix Thunderbirds and the three-time high school state champion Tucson Badgers. When the Badgers came to visit Zenimura Field, they had a record of 52-0. When they left, that record was 52-1. 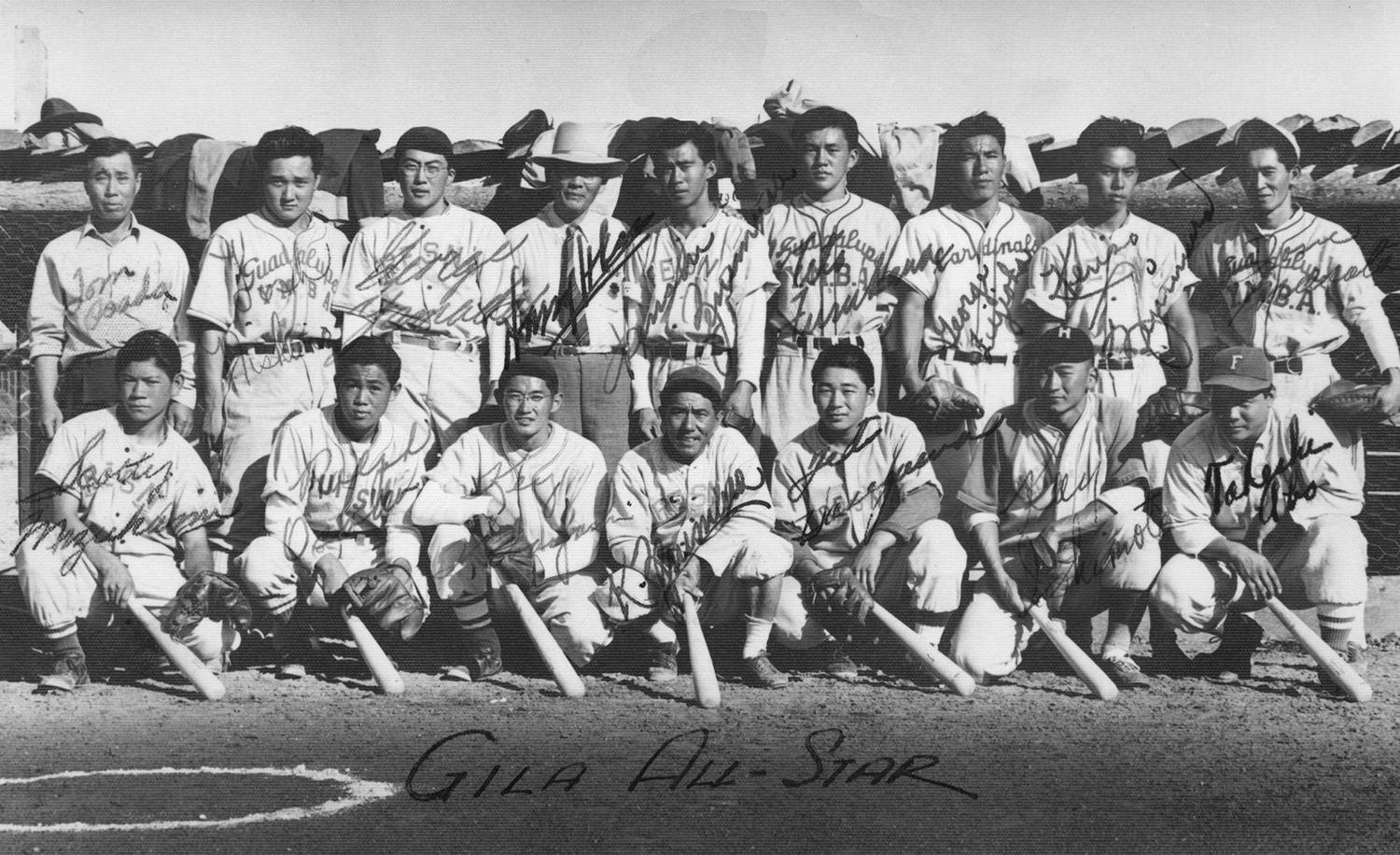 “In the back of our mind we wanted to make up for Pearl Harbor,” said Bernie Weinstein, a player on the Tucson Badgers, during a 2006 reunion of the two teams, arranged by the Nisei Baseball Research Project. “I saw the fence and said ‘God, this is like a prison.’ It was a game that most of us will never forget. I realized that these people were Americans, just like myself. The more I thought about it, the more I thought, what a big mistake we made by putting these people in this relocation camp.”

After the game, the two teams ate watermelon and had a small picnic. Gila River’s Butte High Eagles even showed the Badgers how to sumo-wrestle.

“The two coaches, Kenichi Zenimura and Hank Slagle, were men ahead of their time,” said Bill Staples Jr., author of Kenichi Zenimura: Japanese American Baseball Pioneer. “They were trying to teach their ballplayers the concept of shared humanity. [Zenimura] also made sure that regardless of the outcome of the game, the visiting team would always get the 60 percent of the gate receipts. This is wartime and these guys are making good money to play ball.”

Sadly, after the camp was closed in 1945, the field fell into disarray, and now serves as an olive orchard. 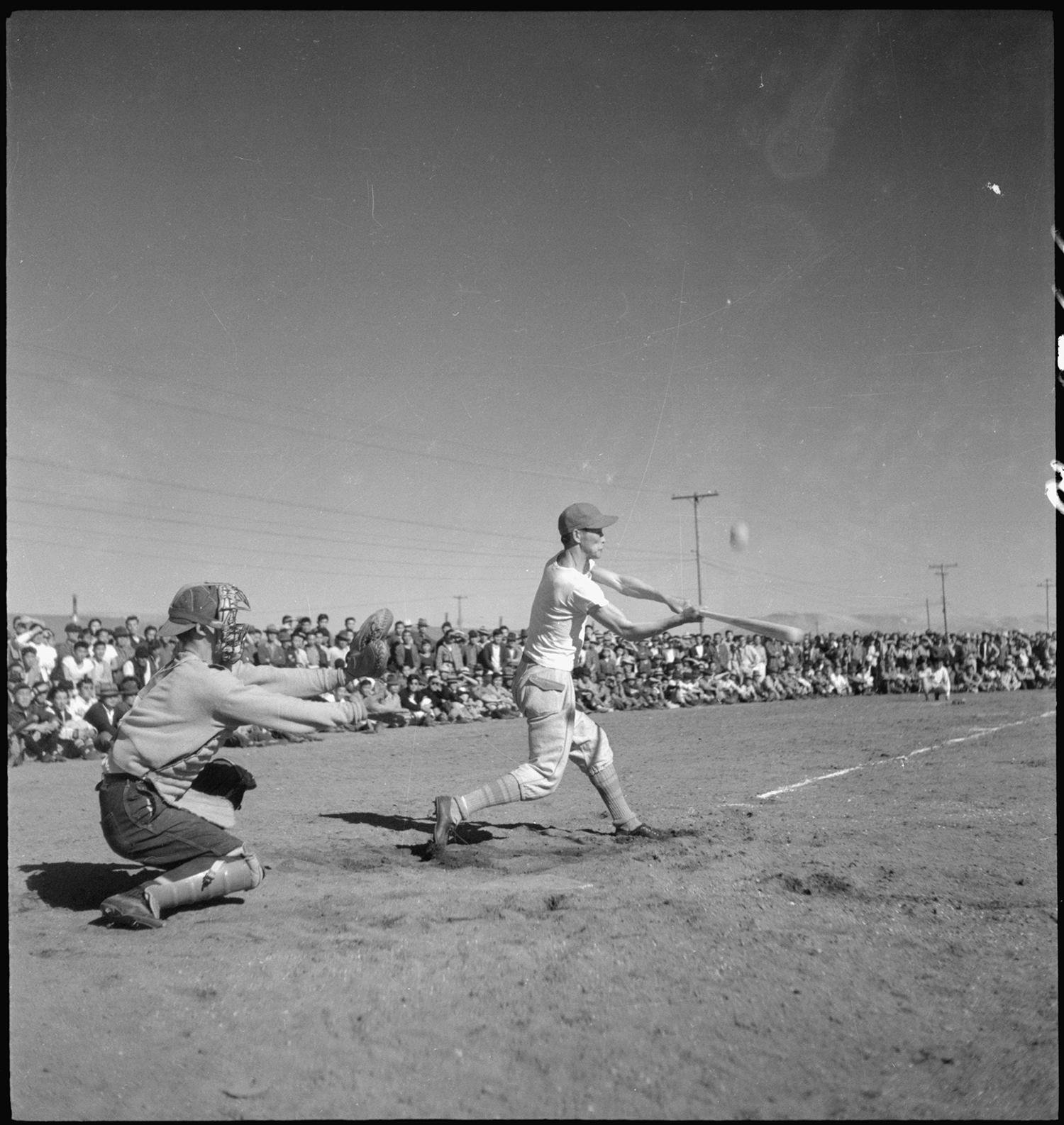 17,000 residents of the Tule Lake Relocation Center watch a baseball game in 1944. (Courtesy of the National Archives and Records Administration)

“After the camp closed down, nobody really appreciated the history of the story, as much as we do in the 1990s, when interest started to return,” said Staples Jr. in an interview with the Hall of Fame. “It’s really just a matter of progress. It’s the same reason that Ebbets Field was torn down. Back then it was just a piece of land that was more valuable for growing olives. It’s a farming community.”

But one important relic from the diamond lives on today: Zenimura Field’s first wooden home plate. Now on exhibit at the Hall of Fame in the timeline exhibit, it serves as an important symbol of hope for people of all nationalities.

“This wooden home plate was much more than a corner of a dusty baseball diamond, or the shape that helped define a batter’s strike zone,” says Hall of Fame senior curator Tom Shieber. “It was (and is) a vibrant symbol of hope for those who were denied their freedom, and an expression of what it meant to be an American for those who were stripped of their civil rights. It is an important artifact in the history of our country, not just the history of our National Pastime.”

As Hall of Fame visitors learn about the home plate, with all of its rusty nails and splintered pieces of wood, so too will they understand the legacy of Kenichi Zenimura, the man who created a fountain of hope in the deserts of Arizona. 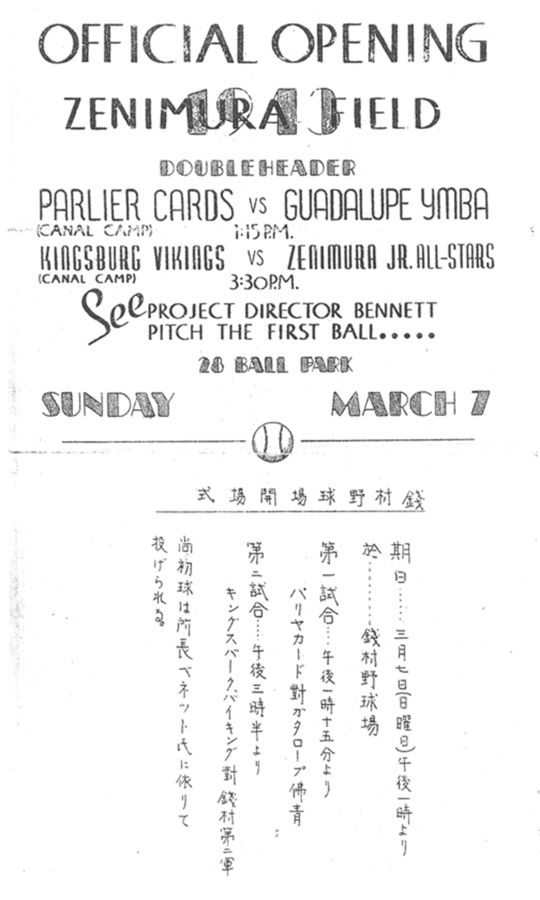 A poster advertising the home opener at Zenimura Field, on March 7, 1943. Zenimura created this poster by hand, in both English and Japanese. (Bill Staples Jr. / Nisei Baseball Research Project) 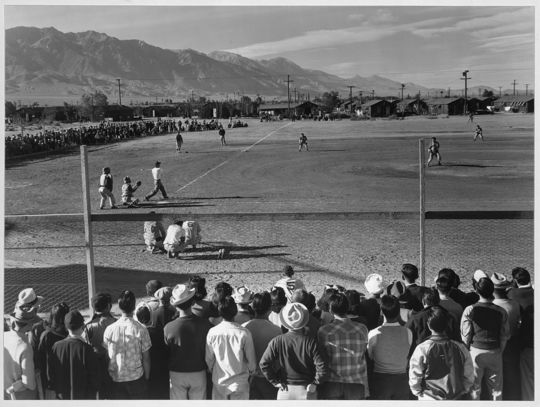 Internees pack the stands to watch a baseball game at the Manzanar Relocation Center in California. (Ansel Adams / Courtesy of the Library of Congress)