Hank Aaron’s career path took him from the segregated South to baseball hero to American icon.

In between, Aaron’s consistency on and off the field won millions of admirers – and shaped his destiny.

Aaron, 86, died Friday, Jan. 22. One of a group of baseball players whose fame transcended the sports arena, Aaron was thrust into the national spotlight in 1973 when he neared the finish of a successful assault on one of sport’s most cherished records: Babe Ruth’s 714 career home runs. 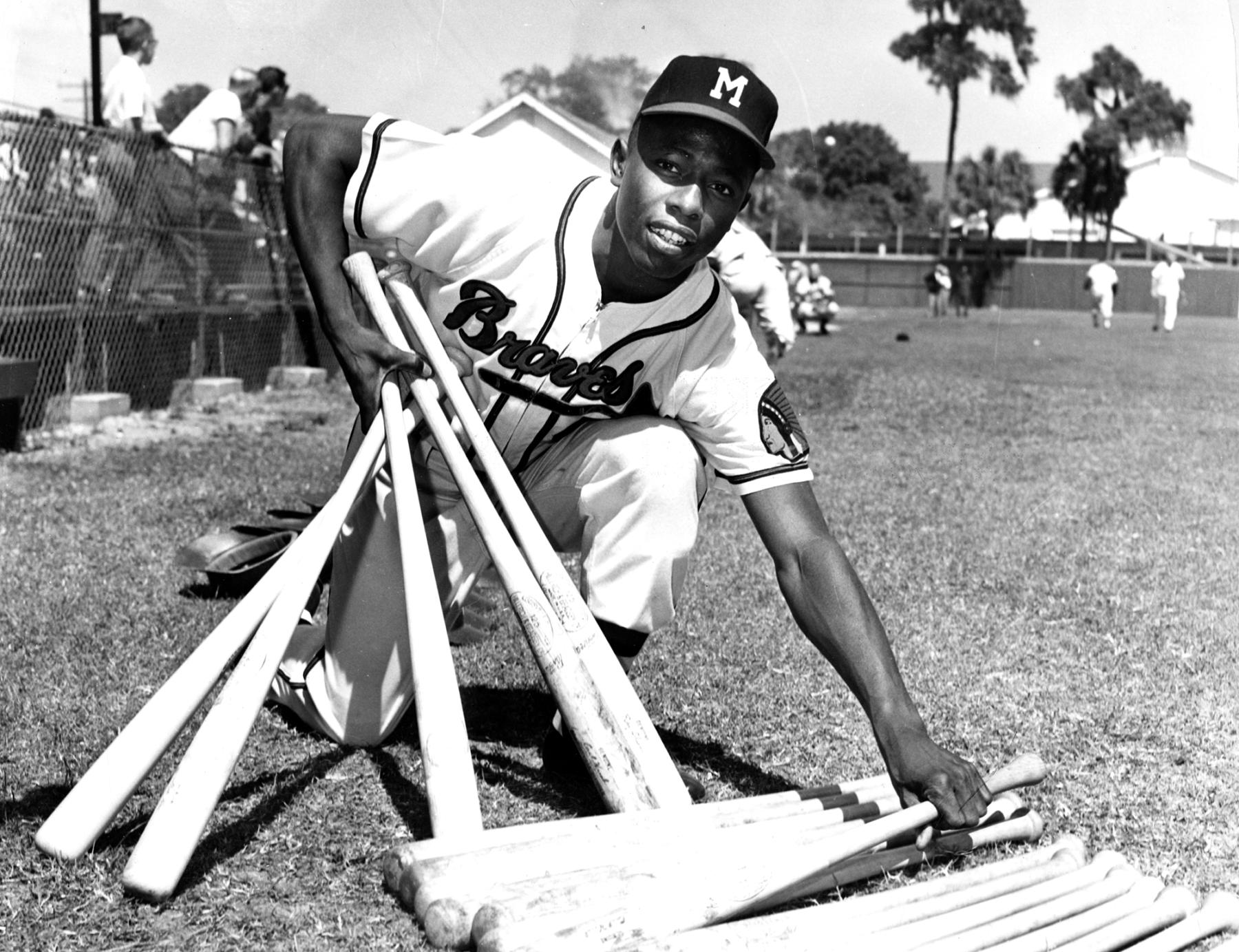 If all of Hank Aaron's 755 home runs were subtracted from his career hit total, he would still have more than 3,000 base hits. (National Baseball Hall of Fame and Museum)

“Hank Aaron’s incredible talent on the baseball field was only matched by his dignity and character, which shone brightly, not only here in Cooperstown, but with every step he took. His courage while pursuing the game’s all-time home run record served as an example for millions of people inside and outside of the sports world, who were also aspiring to achieve their greatest dreams. His generosity of spirit and legendary accomplishments will live in Cooperstown forever. On behalf of the Board of Directors and the entire staff of the Hall of Fame, we send our deepest sympathies to his wife, Billye, and his entire family.”

Born Feb 5, 1934, in Mobile, Ala., Henry Louis Aaron worked on cotton farms in his youth to help support his family. He joined the Negro League’s Mobile Black Bears as a junior in high school, then signed with another Negro League team – the Indianapolis Clowns – in 1951. The following year, Aaron signed with the National League’s Boston Braves.

He played in the minor leagues in Eau Claire, Wis., and Jacksonville, Fla., the next two seasons before winning a spot with Milwaukee – where the big league Braves had moved after the 1952 season – in 1954.

Aaron hit .280 with 13 homers and 69 RBI that season before missing the final month with a broken ankle. Over the next 14 seasons, Aaron played in fewer than 150 games just once – with seven of those seasons coming during 154-game campaigns in the National League.

Aaron’s stellar all-around play quickly made him a hero in Milwaukee, where the Braves were assembling a championship-caliber team. In 1956, Aaron won the first of two NL batting titles with a .328 average. The following year, Aaron was named the league’s Most Valuable Player after hitting .322 while leading the NL in runs (118), home runs (44) and RBI (132). The Braves won their first pennant in Milwaukee that year, and in the World Series Aaron hit .393 with three homers and seven RBI to lead the Braves to a seven-game victory over the Yankees. 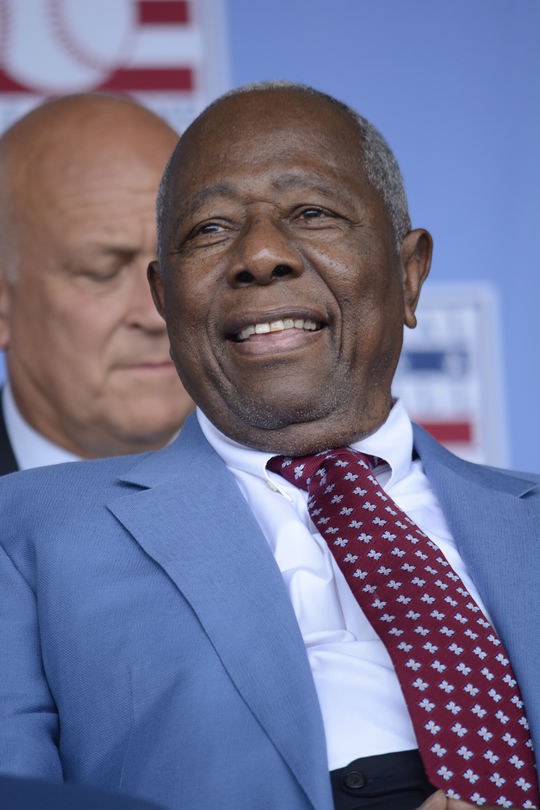 Hank Aaron was a revered presence at Hall of Fame Weekend in Cooperstown, receiving standing ovations from both the fans and fellow Hall of Famers. (Milo Stewart Jr./National Baseball Hall of Fame and Museum)

Aaron and the Braves won the NL pennant again in 1958 – this time losing to the Yankees in the World Series despite Aaron’s .333 average. He won his first of three career Gold Glove Awards that year for his play in the outfield, and followed up in 1959 with another batting title with a .355 average.

“More than anyone else,” said Hall of Fame manager Walter Alston, “(Hank Aaron) made me wish I wasn't a manager.”

From 1957-67, Aaron averaged 37 home runs a year despite never hitting more than 45 in one season. He scored at least 102 runs in every season and averaged 115 RBI per year in one of the most consistent stretches by a power hitter in big league history. 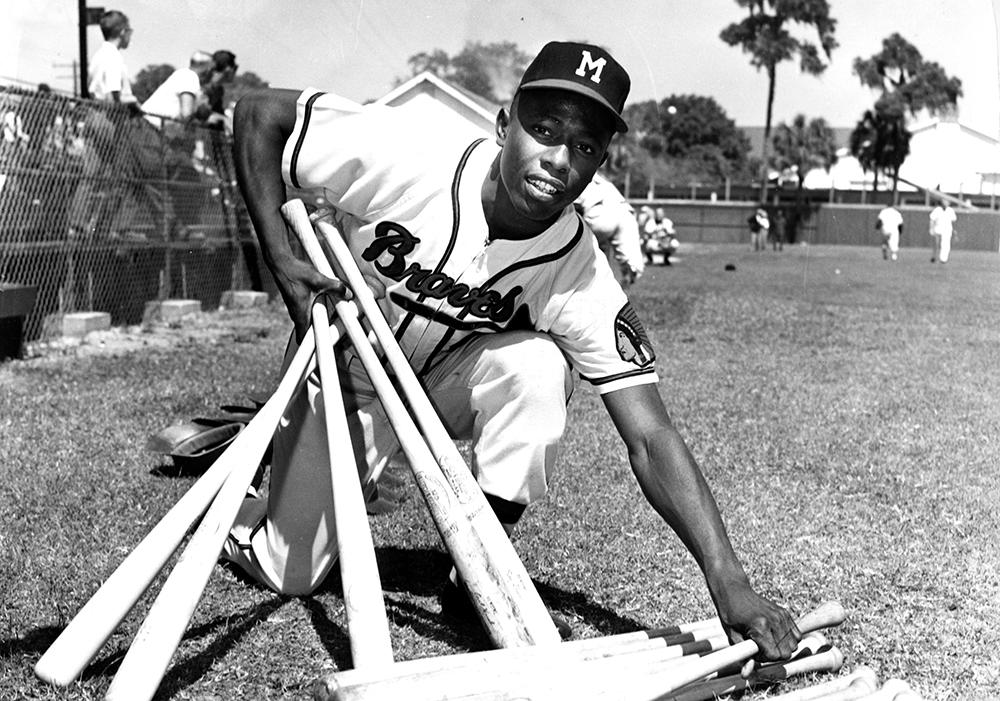 Though he was a perennial All-Star – playing in the Mid-Summer Classic every year from 1955-75 – Aaron at times slid under the national radar thanks to his modest demeanor and his Midwest workplace. But as the 1960s closed, Aaron’s career home run total stood at 554 – giving him a legitimate shot at a run at Ruth’s record.

On April 8, 1974, Aaron pulled an Al Downing pitch over the left-field wall at Atlanta-Fulton County Stadium, and the record was his.

Aaron finished the 1974 season with 20 home runs, then was traded back to Milwaukee to spend his final two seasons with the Brewers. 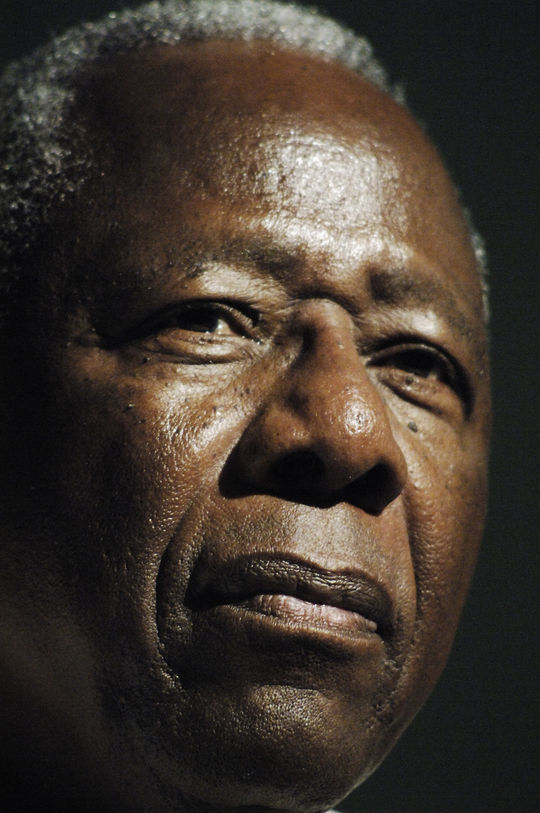 His remarkable consistency left him in the top five of nearly every important offensive category at the time of his retirement. He was elected to the Hall of Fame in 1982 in his first year eligible and later pledged all of his baseball treasures to the Hall of Fame.

“As far as I'm concerned,” said Hall of Famer Mickey Mantle, “(Hank) Aaron is the best ballplayer of my era.”