Who can forget a year in which Luke Skywalker and his lightsaber began his battles with Darth Vader, and Reggie Jackson and his bat triumphed over the Dodgers’ pitching staff? Baseball, Star Wars, and American culture have been intertwined almost from the moment the original film was released on May 25, 1977. The major league schedule was under way when the blockbuster film opened, a season destined to see two of the game’s biggest empires, the Yankees and Dodgers, square off in an epic World Series contest. On both the silver screen and the big league field, from a galaxy far, far, away to Yankee Stadium in The Bronx, what could make for better theater?

Nearly 40 years after Episode IV: A New Hope opened in theaters, one of the nation's most successful film franchises maintains a "Force"-ful link with the National Pastime in American popular culture. 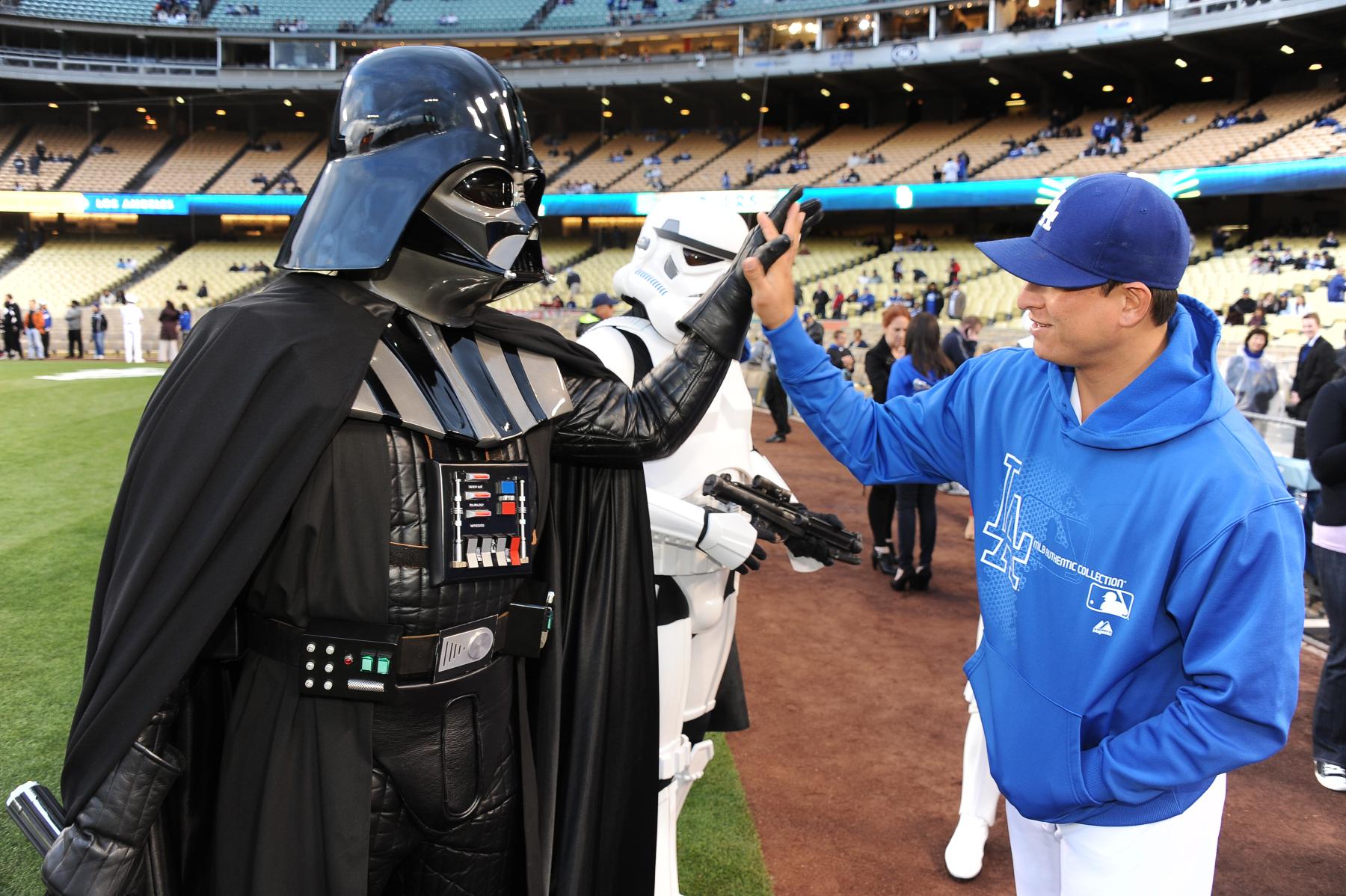 Javy Guerra of the Los Angeles Dodgers high-fives Darth Vader, a Star Wars character at the ballpark for a promotional event, during a game against the San Diego Padres Friday, September 13, 2012 at Dodger Stadium in Los Angeles,California. (Jon SooHoo / Los Angeles Dodgers)

Star Wars-related terms quickly worked their way into the American idiom in 1977, and it did not take long for the baseball media to join the parade. By June, Star Wars phrases were making their way into the sports reports, and the headline writers were taking full advantage of this cultural phenomenon before postseason play began.

Baseball fandom was already in place, but since 1977 the Star Wars series has created its own legion of followers. Several generations of baseball fans and science fiction buffs have grown to enjoy the celebration of both passions at the ballpark. Multiple major league and minor league teams have sponsored Star Wars Days, often held on May the 4th (be with you). These dates include fan favorite giveaways such as bobbleheads and Death Star baseballs. These have become popular memorabilia items, with several examples making their way into the Baseball Hall of Fame artifact collection.

Away from the ballpark, baseball and Star Wars have mixed to create a series of themed baseball caps, and even a comic book with cover art in which Darth Vader swings from the right side of the plate, although one assumes that he might be decent switch-hitter since the Force is supposedly with him. This phenomenon is not restricted to North America, as the Japanese leagues have utilized the popularity of the Star Wars franchise to promote their product.

During the 2015 season, Major League Baseball teamed up with Lucasfilm Ltd. and the Stand Up To Cancer organization to sponsor several special “Use the Force for Good” dates. This included August 30 in Los Angeles (NL), September 8 in San Francisco, September 14 in Detroit, September 20 in Oakland, September 21 in Tampa Bay, and September 27 in Miami. Other franchises also held sponsored Star Wars themed games, many of which were sold out in advance. Fans found out there is no better way to celebrate popular American culture than Star Wars and a ballgame. 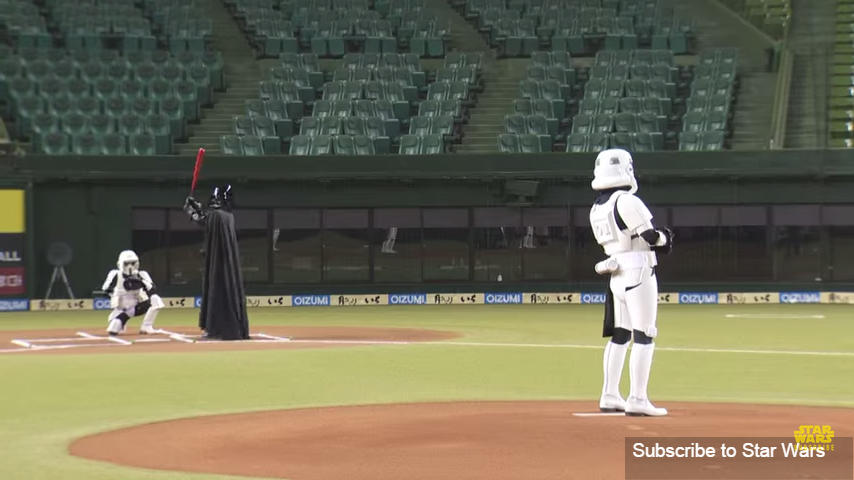 May the Force be with you, but remember, it always helps to have a good lefty in the bullpen. 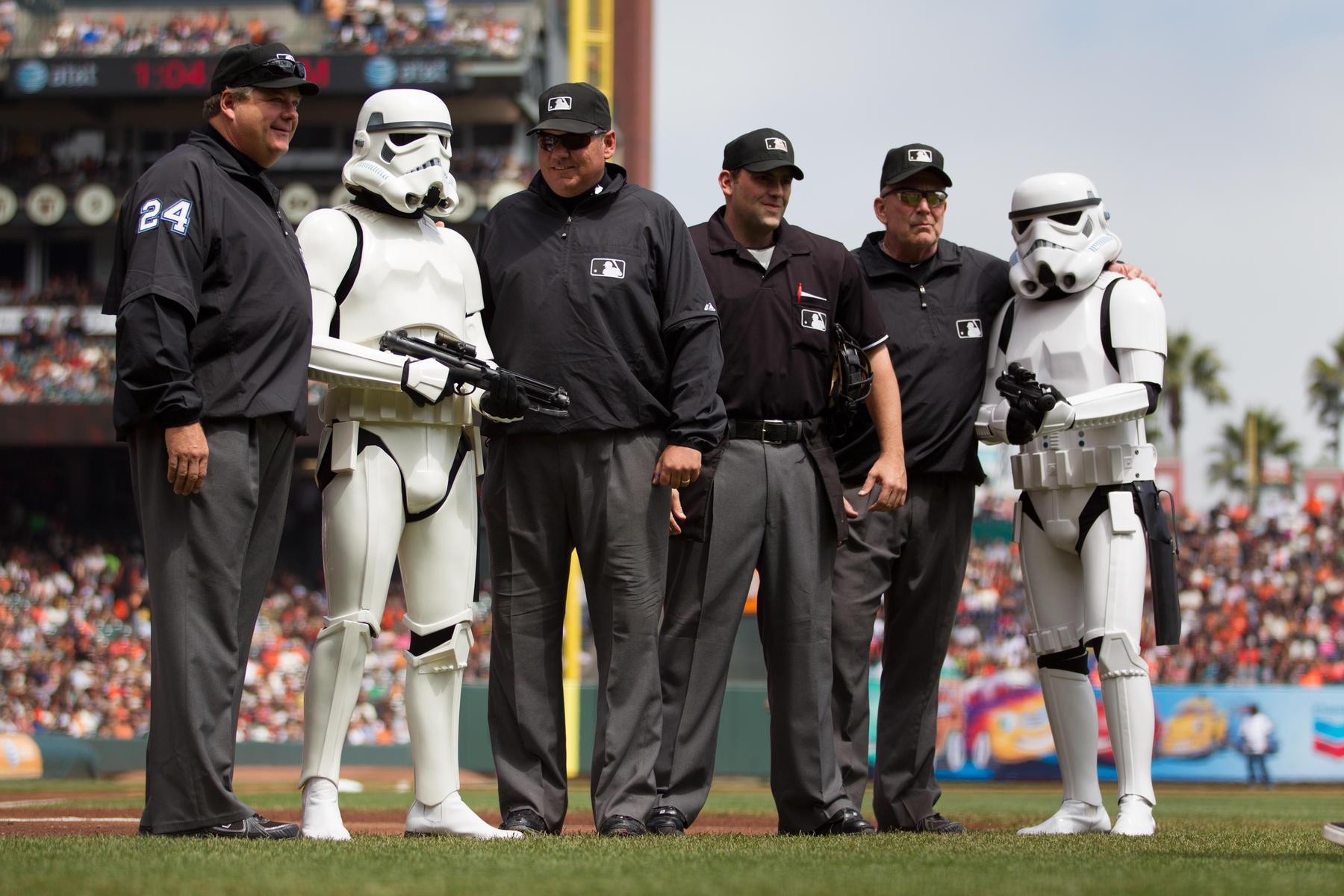