Over 13 big league seasons, Brian Anderson regularly found himself at the center of some of the game’s biggest moments.

For an undersized lefty who grew up in rural Ashtabula County, Ohio, it was a career few of his generation could match.

Born Brian James Anderson on April 26, 1972, in Portsmouth, Va., Anderson and his family soon moved to Geneva, Ohio – located on the shores of Lake Erie, about 50 miles northeast of Cleveland. His parents owned a tire shop, and Anderson quickly established himself as a premium athlete – starring in golf, basketball and baseball for the Geneva Eagles.

Following his high school graduation in 1990, Anderson enrolled at Wright State University in Dayton, Ohio. Playing against mid-level programs in the Mid-Continent Conference, the 6-foot-1, 190-pound Anderson became a top-shelf prospect via pinpoint control and a willingness to pitch inside to right-handed batters.

A first-team All-American and first-team Academic All-American in 1993, Anderson led the nation that year with a 1.14 earned-run average. In the June 1993 MLB Draft, the Mariners took Álex Rodríguez with the first overall pick and the Dodgers followed by drafting Darren Dreifort. The Angels then tabbed Anderson at No. 3. 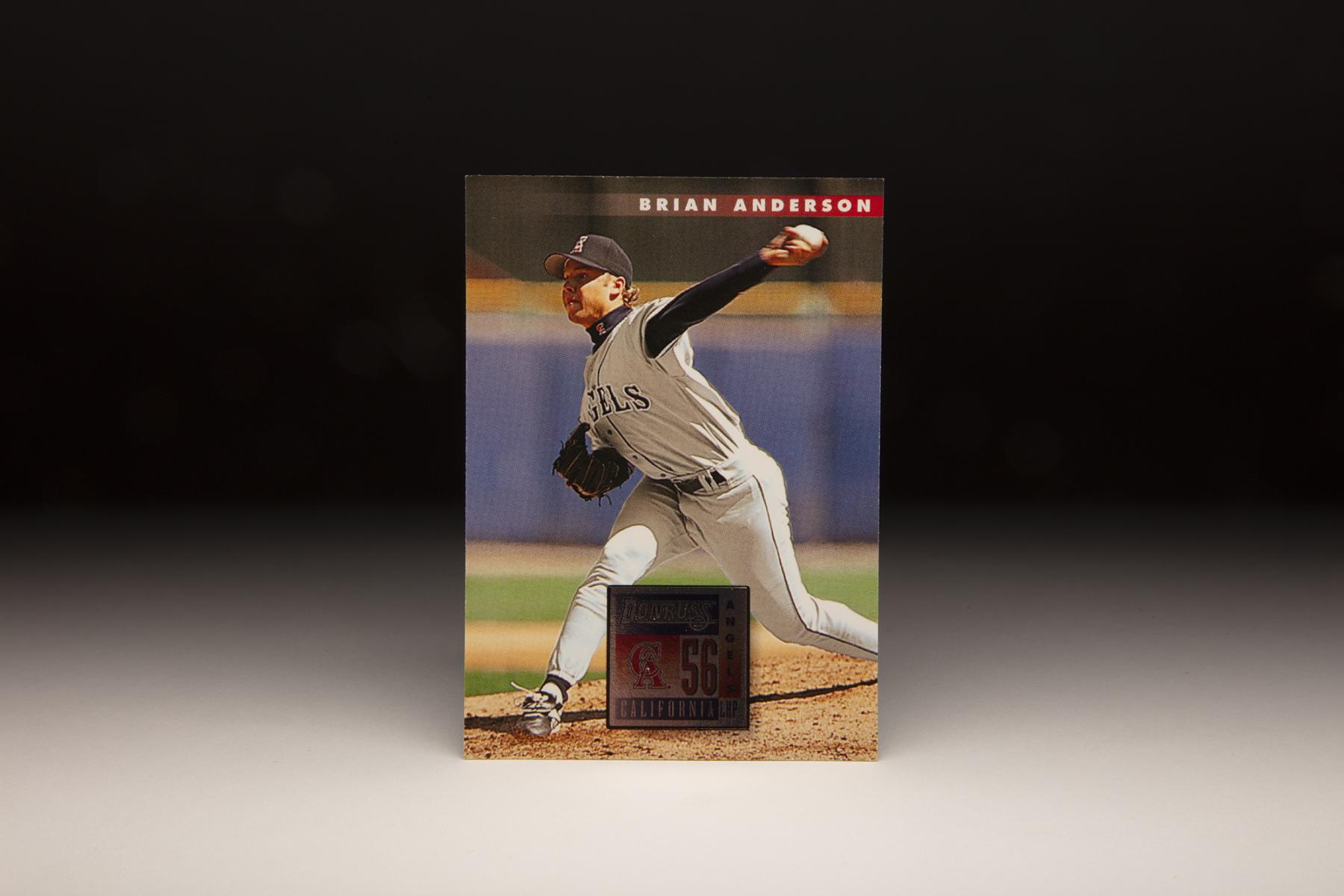 Anderson started his pro career that summer in Double-A Midland, making two starts before heading to Triple-A Vancouver. After two starts in the Pacific Northwest, Anderson became the first player from the 1993 draft class to play in the majors when he debuted for the Angels on Sept. 10, 1993.

Anderson was one of the last cuts by the Angels in Spring Training of 1994, but he was quickly recalled from the minors to start California’s sixth game of the season. Working 8.1 innings of one-run ball against the Brewers, Anderson picked up his first big league win. He would appear in 18 games in that strike-shortened season, going 7-5 with a 5.22 ERA and finishing sixth in the American League Rookie of the Year Award voting despite missing a month with a broken thumb.

Anderson was sidelined for six weeks in 1995 with a left bicep strain, going 6-8 with a 5.87 ERA in 17 starts. Then on Feb. 15, 1996, the Angels traded Anderson to the Indians – the team he grew up rooting for – in exchange for Jason Grimsley and Pep Harris. 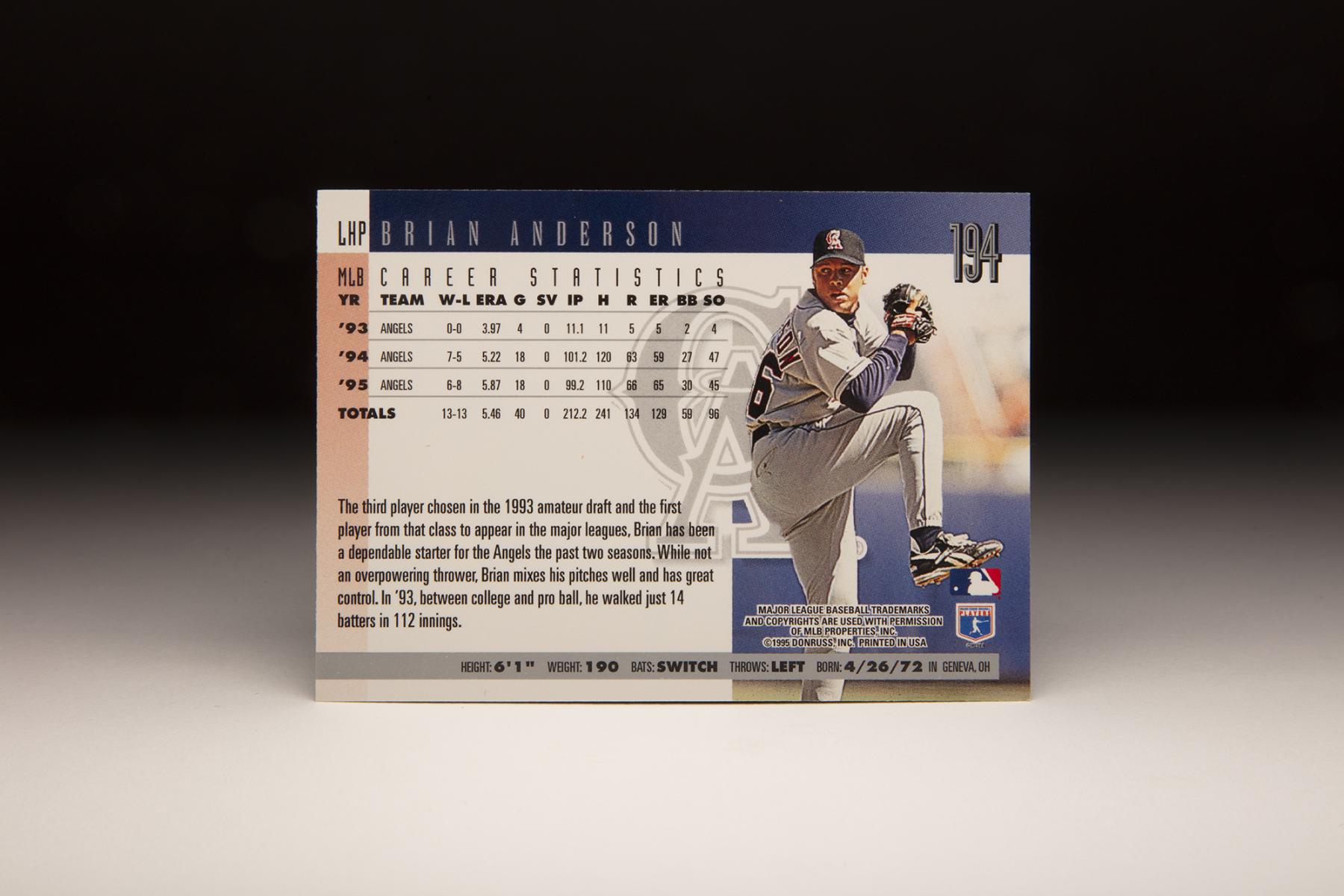 “We are most definitely going to allow him a chance to compete for a spot on our major league club,” Indians general manager John Hart told the Associated Press. “However, this is a deal we have made for the long term. He has a high ceiling. His best years are ahead of him.”

Anderson joined an Indians club that had won the AL pennant in 1995 and had a lineup stocked with young hitters like Kenny Lofton, Jim Thome, Albert Belle and Manny Ramírez. But with a thin pitching rotation, Anderson had a chance to make an immediate impact.

Starting the season at Triple-A Buffalo, Anderson made nine spot starts for the Indians that year while going 11-5 with a 3.59 ERA with the Bisons. The Indians won the AL Central for the second straight season – with Anderson going 3-1 with a 4.91 ERA – but Cleveland lost to Baltimore in the Division Series.

After being left off the Division Series roster against the Yankees, Anderson was activated for the ALCS vs. the Orioles.

Pitching out of the bullpen, Anderson worked two scoreless innings of relief in Game 1 then followed that with 3.1 innings of work in Game 4, allowing just one run. Then in Game 6 – with the Indians leading the series 3-games-to-2 – Cleveland manager Mike Hargrove called on Anderson to pitch the bottom of the 10th inning of a scoreless game at Camden Yards. 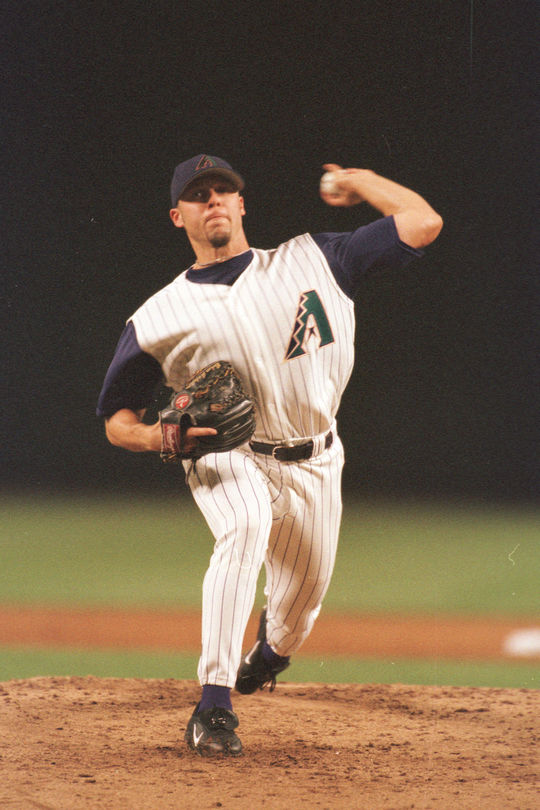 Brian Anderson was taken by the Arizona Diamondbacks with the second pick in the 1997 MLB Expansion Draft. (National Baseball Hall of Fame and Museum)

Anderson struck out Eric Davis and Jeffrey Hammonds to start the frame before walking Cal Ripken Jr. on four pitches. But Anderson got B.J. Surhoff to line out to Marquis Grissom in center field to end the inning.

In the top of the 11th, Tony Fernández homered off Armando Benítez, giving Cleveland a 1-0 lead. José Mesa retired the side for the Indians in the bottom of the inning, sending Cleveland to the World Series on the strength of a victory earned by Anderson.

“When (Hargrove) called down in the 10th and told me I was going in, I said: ‘Wait a minute – me?’” Anderson told Thomson News Service after receiving a champagne shower in the Indians’ clubhouse. “I couldn’t believe he wanted me in a 0-0 game.

“All the (Cleveland) Browns stuff in the 1980s: The Drive, The Fumble – I watched it all. I used to think how cool it would be if I was on the field and could change all that. I thought: I’m not going to let this happen again.”

But Anderson nearly had a bigger date with history a few days later. In the ensuing World Series against the Marlins, Anderson appeared in Games 3 and 4, pitching three scoreless innings in Game 4 to earn the save in Cleveland’s 10-3 win. 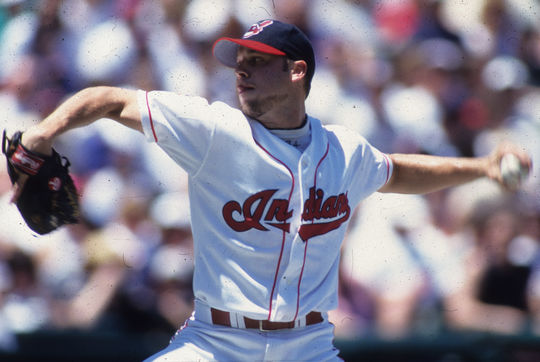 The Indians acquired Brian Anderson from the Angels on Feb. 15, 1996 in exchange for Jason Grimsley and Pep Harris. (Dan Mendlik)

Four days later in the deciding Game 7, Hargrove called on Anderson to face left-hander Darren Daulton with two outs and nobody on in the eighth inning – and Cleveland clinging to a 2-1 lead.

Marlins manager Jim Leyland sent right-hander Jeff Conine up to hit for Daulton, but Hargrove stuck with Anderson – who coaxed Conine to fly out to left field to end the frame.

Suddenly, the Indians were three outs away from the World Series title – and Anderson would be a part of the winning box score.

Mesa, however, could not hold the lead in the ninth. And in the 11th inning, Edgar Rentería’s single off Charles Nagy scored Craig Counsell – who had reached base on an error by Fernández – to give the Marlins the win and the championship.

Twenty-three days later, Anderson was taken by the Diamondbacks with the second pick in the Expansion Draft.

There was little drama, as Anderson was reportedly the Diamondbacks’ target as soon as the Devil Rays took pitcher Tony Saunders with the first overall pick.

Given regular work in the Diamondbacks rotation throughout the 1998 season, Anderson was 12-13 with a 4.33 ERA in 32 starts, working 208 innings and leading the NL with a walks-per-nine innings rate of 1.039. Anderson was 8-2 as a spot starter in 1999, and started Game 4 of the NLDS vs. the Mets – allowing just two runs in 7.0 innings in a game the Diamondbacks lost on Todd Pratt’s walk-off home run in the 10th that clinched the series. 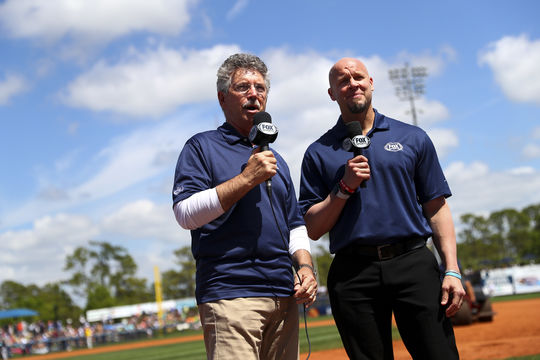 Anderson returned to the rotation in 2000 to go 11-7 with a 4.08 ERA in a career-best 213.1 innings. Then in 2001, Anderson was 4-9 with a 5.20 ERA in 22 starts. The Diamondbacks won the NL West, and Anderson reverted to his traditional postseason form by allowing one run over two appearances in the NLDS vs. the Cardinals and then earning a win in Game 4 of the NLCS vs. the Braves.

In the World Series against the Yankees, Anderson got the start in Game 3 after wins by Curt Schilling and Randy Johnson in the first two games. He was tagged with a hard-luck 2-1 loss after allowing five hits and two runs over 5.1 innings, but saved Arizona’s bullpen with his outing. Arizona won the World Series five days later on Luis Gonzalez’s walk-off hit in Game 7.

Anderson was 6-11 with a 4.79 ERA in 2002, helping the Diamondbacks advance to the postseason for the third time in four seasons. Anderson then became a free agent and signed with the Indians for the 2003 campaign, joining a club that was retooling following its dominant days of the late 1990s.

“It’s one thing when the team doesn’t have a plan,” Anderson told the Associated Press after signing a one-year deal. “But you could see that the plan here was well thought out.”

After going 9-10 with a 3.74 ERA in 25 appearances, Anderson was traded to Kansas City in a stretch-drive deal as the surprising Royals chased a postseason berth. Anderson went 5-1 in seven starts, impressing his new team even as the Royals finished seven games behind the Twins in the AL Central.

Signing a two-year deal to return to the Royals, Anderson was 6-12 with a 5.64 ERA in 2004, then suffered an elbow injury six starts into the 2005 season. Two Tommy John surgeries followed, but in 2007 – with his career seemingly over – Anderson began a comeback that saw him head to Spring Training with the Rays in 2008 before tearing his ulna collateral ligament for the third time and ending his career.

He retired to the broadcast booth, where he began calling Rays games in 2008. The fun he brought to big league clubhouses easily translated to the airwaves.

“It’s always fun to have guys in the clubhouse who know how to laugh at themselves,” Rays teammate Troy Percival told the Tampa Bay Times, “and he can definitely do that.”

A career that featured more than a few memorable moments, however, was certainly nothing to laugh at. 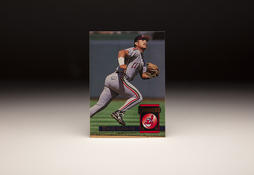 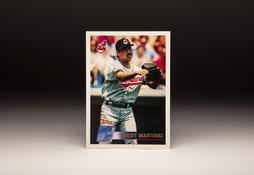 Dennis Martínez was the first Nicaraguan to play in the major leagues. 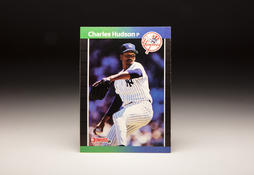 This 1989 Charles Hudson card is a prime example of the Donruss Company truly hitting their stride. 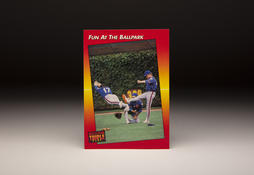 #CardCorner: 1992 Donruss Fun at the Ballpark

In 1992, Donruss took a nontraditional approach to a new series of baseball cards with "Fun at the Ballpark."