Halfway through the 1902 season, John McGraw was peeved. As a part owner and player/manager of the new American League Baltimore Orioles, McGraw liked playing at the very edges of the rules, and he was not especially particular about which side of the rules he was on. In fact, one journalist had already reported, "McGraw uses every low and contemptible method that his erratic brain can conceive to win a play by a dirty trick." As a result, he was now firmly in the doghouse of the American League president, Ban Johnson.

Johnson, a strong-willed baseball man, had a clear vision for the success of his new league. It was to have clean, honorable contests, and would not include any of the “rowdyism” and umpire-baiting that made McGraw notorious as a player in the 1890s. Johnson wanted an American League ballclub in Baltimore, home of the old National League Orioles in the 1890s. A star of the old Orioles? None other than John McGraw. That Johnson agreed to work with McGraw at all was testament to the connections the long-time Baltimore player and future manager had in the city.

By 1902, however, McGraw and Johnson were at war, with McGraw frequently employing his “contemptible methods” and Johnson repeatedly reprimanding him. Finally, in July, Johnson suspended McGraw for the remainder of the season. This was all McGraw needed. He jumped to the National League. There he hooked up with fellow Johnson adversary and part-owner of the New York Giants, John T. Brush, who hired him. As the Giants’ new manager, McGraw then proceeded to bad-mouth his old associates and the league in general.

“The American League is a loser and has been from the start,” stated McGraw. He then called out the Philadelphia club in particular. The Athletics, he said, were not making any money and were so burdened with debt that owner Ben Shibe had a “white elephant” on his hands. 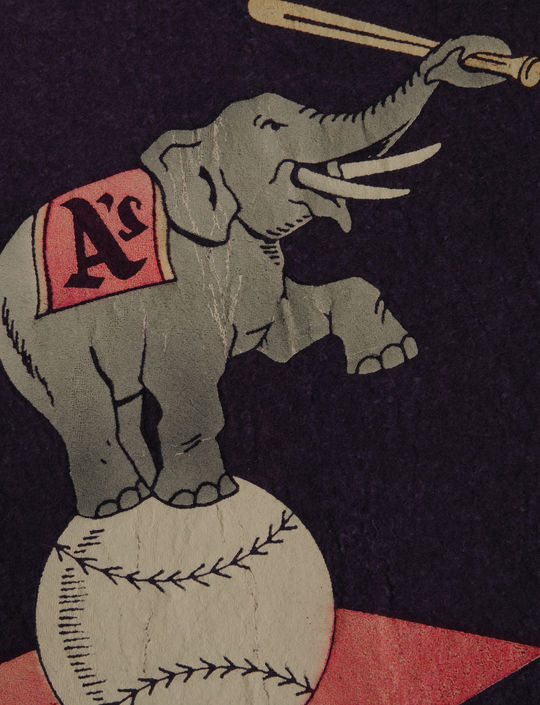 "The A’s defiantly adopted the white elephant both as a symbol of pride and an opportunity to refute and ridicule McGraw."

The “white elephant” McGraw cited originally gained infamy as a gift that the King of Siam gave to obnoxious courtiers, who were ruined by the cost of maintaining an expensive animal they dared not get rid of. By extension, McGraw alleged that the Athletics, with high-salaried players and an expensive ballpark rental deal, were doomed to failure.

The A’s defiantly adopted the white elephant both as a symbol of pride and an opportunity to refute and ridicule McGraw. Throughout the remainder of the season, the press often referred to Philadelphia in conjunction with the animal, as in the New York Sun: “The Athletics have drawn 136,000 people to thirty-two games this season…. This does not seem much like a ‘white elephant’ condition.”

The Philadelphia-based Sporting Life went further, noting that the Athletics’ attendance led all major league teams for 1902, then used the image as a nickname for the club: “At home 411,320 fans paid tribute to the White Elephant,” adding that the National League’s Phillies’ 112,066 admissions for the season were last in the majors. 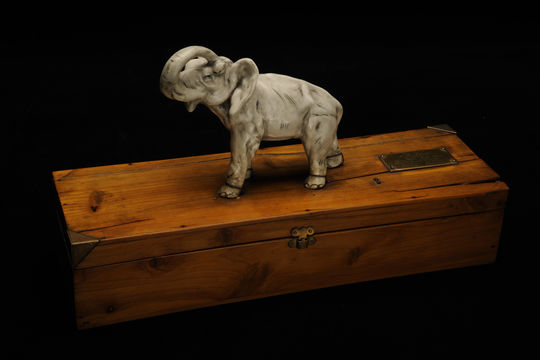 For the grand pennant-winning parade down Broad Street, press reports stated that the parade floats “were very elaborate, white elephants predominating.” In addition, at a benefit game earlier in the day, the Athletics gave out 10,000 small white metal elephants to the patrons, the pachyderms having “proved to be a wonderful war cry.” Finally, at a dinner for Frank Hough, the Athletics’ popular secretary, a group of his friends commissioned a gold locket for him, with “the raised figure of an elephant formed solidly from cut diamonds with a ruby for the eye,” reported Sporting Life.

With the image established, the Athletics continued to employ it the following seasons. In 1905, Philadelphia took its second American League pennant and faced McGraw’s own Giants in the World Series. Fittingly, the A’s incorporated a playful rendition of the elephant on the cover of their 1905 Series program, a practice they repeated in subsequent years.

Increasingly tied to the image of the franchise, the elephant soon began a slow migration to the Athletics’ uniforms, reportedly beginning with the club sweater, but certainly with a small blue silhouette on the sleeve of the 1918 home jersey. Two years later the blue elephant “migrated” to the left breast, replacing the large capital “A” that had been the Athletics’ signature image to that point.

The blue elephant changed to white in 1924, matching McGraw’s original description. Ty Cobb, who spent the last years of his career in Philadelphia, wore this style. Similarly, Hall of Famer Al Simmons, Athletics outfielder in from 1924 to 1932 and a player/coach in the early 1940s, wore a beautiful blue leather jacket with a white elephant, later donated to the Hall. Visitors to the Hall can see both items on exhibit here. 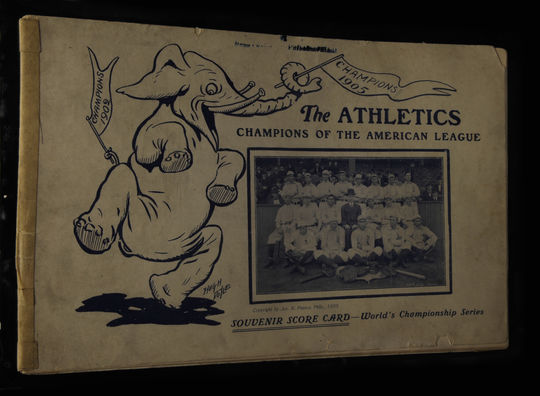 The elephant retreated from the jersey in 1928 as the “A” returned. Although the animal would not return to the jersey during the rest of the franchise’s duration in Philadelphia, it remained a potent symbol for the A’s. In a variety of guises, the pachyderm appeared on World Series press pins, team letterhead, and extensively in publications. In contrast to today’s rigorous trademark practices, the Athletics used a variety of elephants on their publications, some more realistic, others more fanciful. Compared to the stolid elephant of the 1920s, the 1940s and 50s versions were more animated, often seeming to smile and frequently swinging a bat in its trunk. But by the franchise’s fifth decade, he elephant might have been lively, but the franchise was not – trailing the league in both standings and attendance.

In 1955, businessman Arnold Johnson bought the club and moved it to Kansas City. He reintroduced the elephant, now blue (again) and perched on a baseball, onto the jersey sleeve, much as Philadelphia had in 1918. The elephant was short-lived in Kansas City, however. When Johnson died suddenly in 1960, Charles O. Finley purchased the franchise and immediately revamped its image, beginning by banishing the elephant and later replacing it with the Missouri mule. The new mascot, named (appropriately enough) Charlie O., was not embraced by the fans, who saw it as an insincere use of the state animal. When Finley left for Oakland in 1967, he brought with him the mule, the new green and gold uniforms, and the Athletics nickname, but continued to refuse to re-employ the elephant.

The elephant’s renaissance began in 1988, under the regime of owner Walter A. Haas Jr., who had purchased the A’s from Finley in 1981. Haas returned the elephant on a ball logo, now green and gold rather than blue or white, to its “proper” place on the left sleeve. From 1988 to 1990, the reintroduced elephant was immediately rewarded with three American League pennants and the 1989 World Championship. At about this same time the Athletics also brought forth the elephant as a living, breathing mascot that walked around the stadium. First as Harry Elephante, now as Stomper, the pachyderm became increasingly linked with the franchise. 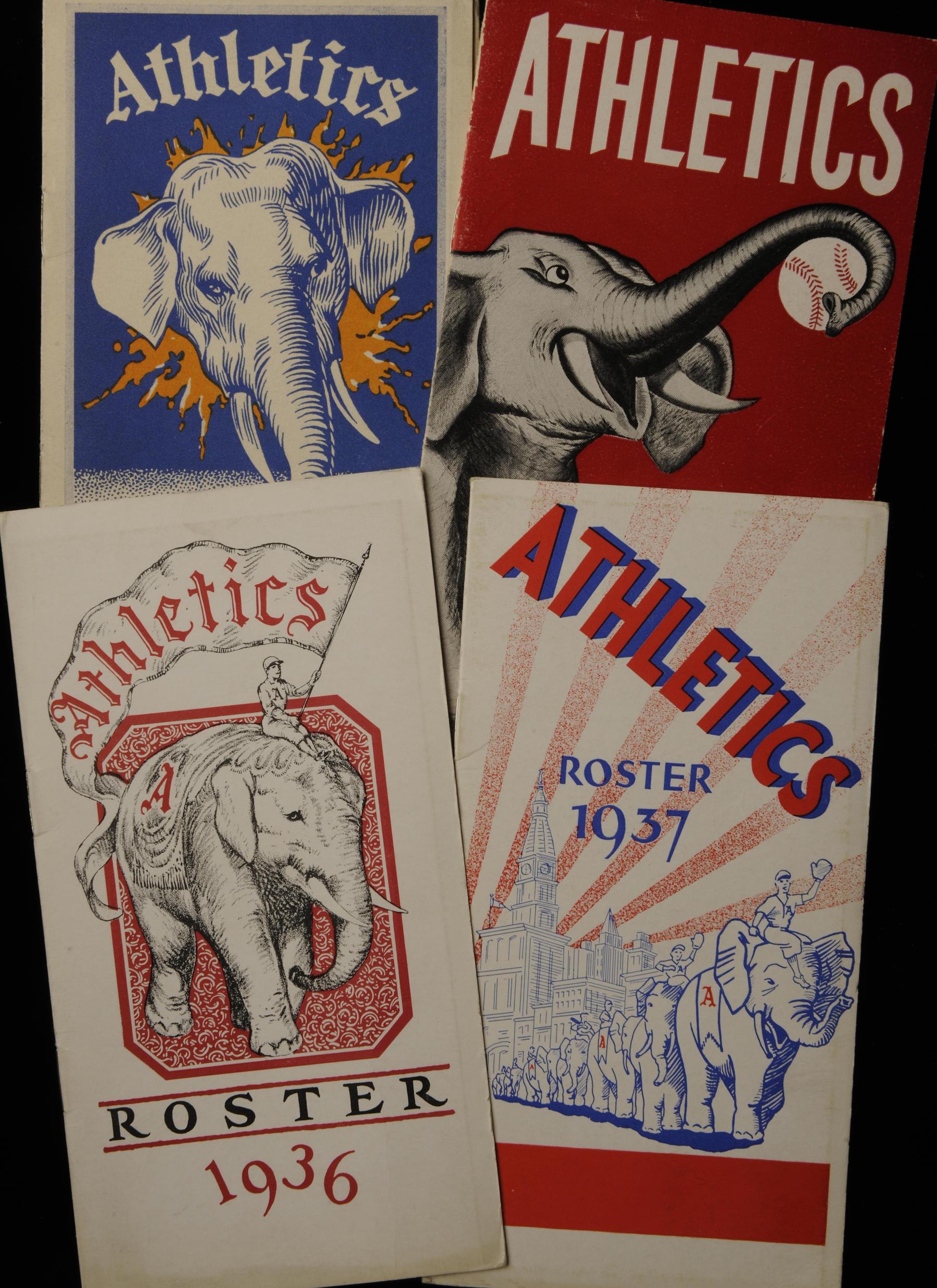 In 1993, the A’s replaced the elephant on a ball logo with the angry elephant emblem, featuring the elephant’s head with a pair of crossed bats in its trunk. The angry elephant was pushed off the regular jersey by the traditional image in 1995, but reappeared on the club’s batting practice caps and jerseys for the next ten years, generally backed by a sunburst and often with the elephant wearing sunglasses.

Several elephant artifacts connected to the Athletics will be forever preserved in the Hall of Fame’s collection, including:

Today, the elephant is more associated with the Athletics than ever before. Although no longer the white elephant of John McGraw’s imagination, it remains the symbol of the franchise, figuratively stomping opponents, even as it harkens back to the days of yore. 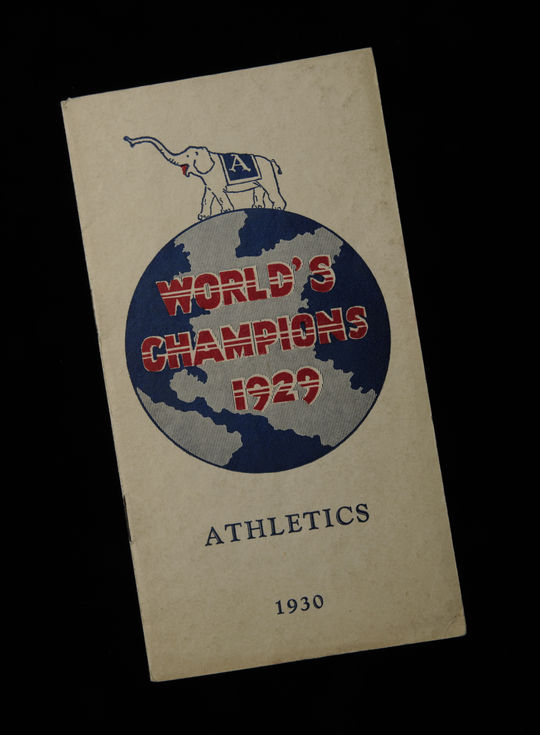