Giants Back on Top

After seeing their team win its third World Series championship in five years, Giants fans will be able to savor their San Francisco treat throughout the 2015 season at the National Baseball Hall of Fame and Museum.

Artifacts donated by members of both the Giants and the Kansas City Royals from the 2014 World Series will be on display beginning Monday, Nov. 24 in the Autumn Glory exhibit on the Museum’s third floor. The artifacts, which tell the story of this year’s thrilling Fall Classic, will be displayed throughout the 2015 Major League Baseball season until a new champion is crowned next fall. 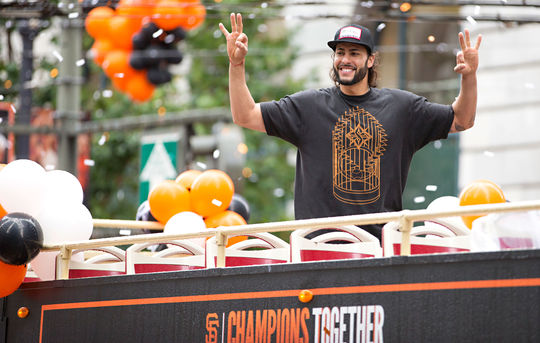 Hall of Fame President Jeff Idelson and Vice President Brad Horn were on hand in the Giants’ clubhouse at Kansas City’s Kauffman Stadium to ask players and coaches if they would be willing to send their equipment to Cooperstown.

“It’s a very euphoric and ecstatic place to be,” Horn said. “The clubhouse celebration is unlike anything else in baseball, given its pure and unscripted joy.”

Horn said the process for assembling this year’s collection could not fully begin until Giants third baseman Pablo Sandoval secured the final out in Game 7.

“Early on in the day (of Game 7), Jeff and I had ‘if the Royals win’ and ‘if the Giants win’ plans – and then the storyline unfolds,” said Horn. “(World Series MVP) Madison Bumgarner was a consistent piece of the puzzle, but (Game 7) winner Jeremy Affeldt really came out of the blue. He shut down the Royals at a really key moment in the game, and he became a wild card for us that emerged as Game 7 was happening.”

Visitors will be able to view caps worn by Bumgarner and manager Bruce Bochy, a jersey worn by catcher Buster Posey and spikes worn by Affeldt. Additionally, fans will see the bats that delivered some of the Giants’ biggest hits, including ones used by Sandoval and Hunter Pence during the Fall Classic, and the bat used by outfielder Travis Ishikawa to hit the series-clinching home run in Game 5 of the NLCS.

After the Giants swept the Detroit Tigers in 2012 and the Red Sox rode their “Boston Strong” mantra to a title last year, this fall’s World Series featured a tighter matchup between the Giants and Royals. Lenny DiFranza, who is serving as lead curator for this year’s Autumn Glory exhibit, said the championship display case will feature artifacts from both clubs.

“Each series has its own storyline,” DiFranza said. “With a seven-game series, we want to try to illustrate the back-and-forth nature where either team could have won.”

Artifacts marking the Royals’ first World Series appearance in 29 years will include: The cap worn by pitcher Yordano Ventura during his Game 6 victory, and in tribute to former Cardinals outfielder Oscar Taveras, in Game 6; the cap worn by pitcher Brandon Finnegan in Game 3 when he became the first player to appear in the College World Series and the MLB World Series in the same year; and the jersey worn by manager Ned Yost in Game 4 of the ALCS when he became the first manager in history to win his first eight postseason games. 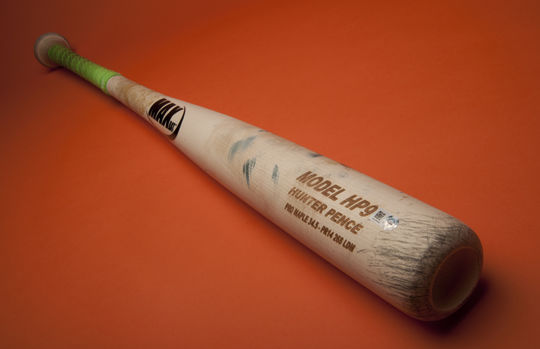 Once all of these artifacts were brought back to Cooperstown and accessioned, they were cataloged, examined and photographed by the Museum’s collections staff.

While most items will be kept in the same condition in which they arrived, DiFranza said other artifacts require cleaning in order to ensure their long-term preservation.

“If Pablo Sandoval’s bat is covered in pine tar, we’re not going to clean that – although you have to be careful where you set it down because will stick to things,” he said. “But Buster Posey’s jersey was soaked in champagne, and in that case we had to clean the champagne because the alcohol will degrade the jersey.”

In addition to the three-dimensional artifacts used on the field, DiFranza and his colleagues like to incorporate other elements from the stands to help tell the story. Past exhibits, for instance, have featured memorable items such as a Brian Wilson-themed “Fear the Beard” T-shirt from the Giants’ 2010 victory, cowbells from Tampa Bay’s Tropicana Field in 2008 and a rally monkey stuffed animal from the Angels’ come-from-behind triumph in 2002.

“Fans might not always think of these things when they think about the World Series,” said DiFranza, “but when they come to the exhibit and see those items, it will remind them of what they were thinking and feeling during that series in different ways than seeing an artifact that was used on the field. They’ll remember the fans and the excitement and the emotion of the series.” 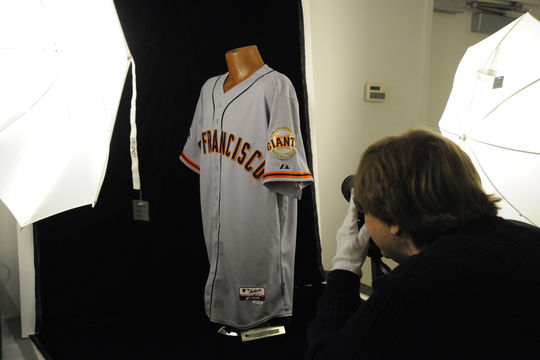 Every artifact accessioned by the Museum is photographed immediately after it arrives in Cooperstown to document its condition. (Milo Stewart, Jr./National Baseball Hall of Fame) 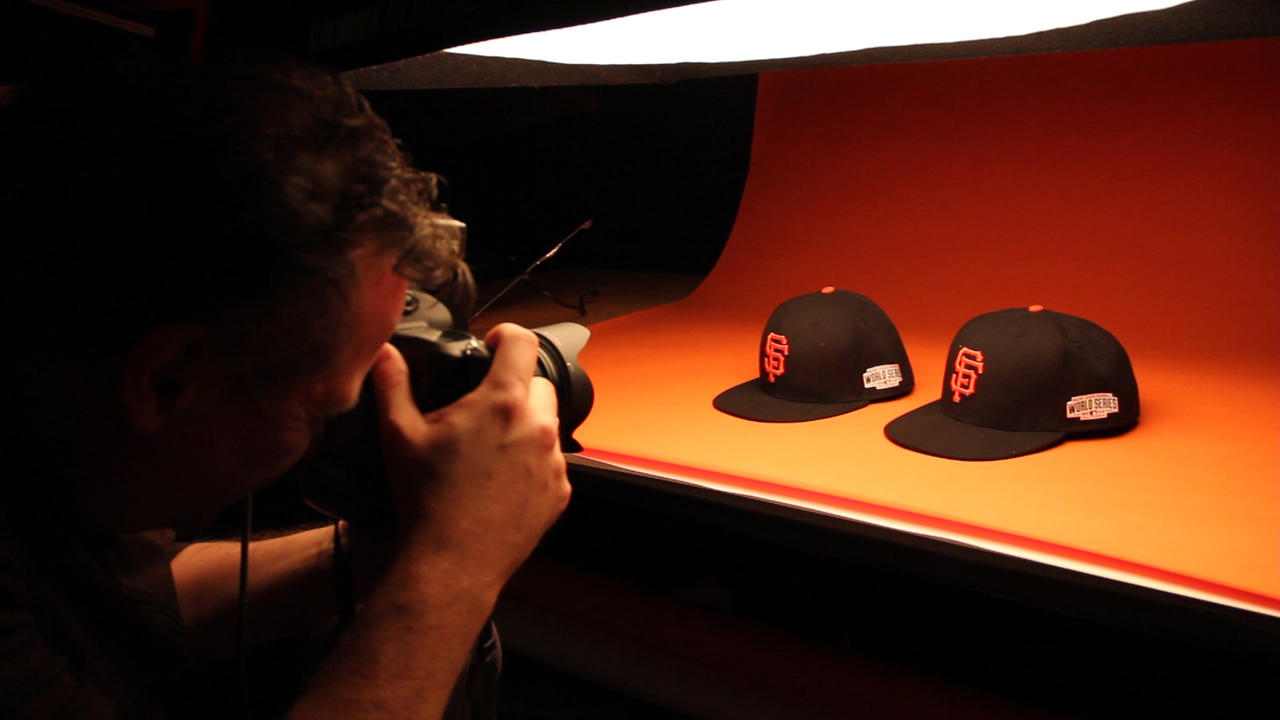 DiFranza said the new exhibit should be fully installed by Friday, Nov. 21, before it officially opens to the public the next day. Red Sox fans, meanwhile, have no need to worry: Several Boston artifacts from the current Autumn Glory exhibit will simply be relocated around the Museum. The bat used by 2013 World Series MVP David Ortiz will be featured in the World Series timeline on the third floor, while two other artifacts will be placed in the Red Sox locker in the Today’s Game exhibit on the second floor.

The rest of the 2013 World Series artifacts will continue to be preserved by the Museum and may be used for new exhibits in the future.

In the meantime, though there have been no official plans made yet, Horn said he is working with the Giants’ representatives to try to bring the team and the World Series trophy back to Cooperstown for another “Giants Weekend.”

“There’s still a big New York Giants fan base here, and San Francisco fans travel well. It’s a fun opportunity for fans to relive the excitement and have a tailored experience in the Museum that is based around their team.” 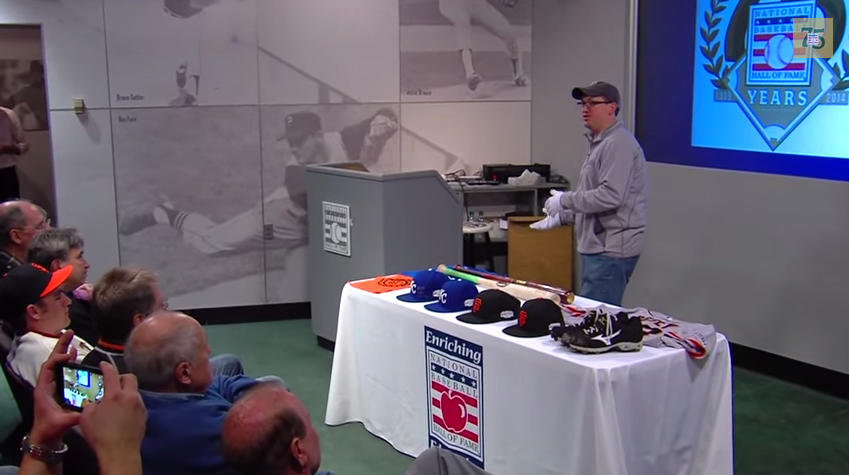 From the diamond to Cooperstown

The National Baseball Hall of Fame and Museum accessions (admits to the collection) hundreds of three-dimensional artifacts every year. The process starts with the Accessions Committee, which meets once a month to vote on each offered artifact. Though all artifacts come to the Museum as donations, a significant cost is involved with the perpetual care of each piece.

When the Museum agrees to accession an artifact, we agree to care for it in perpetuity.

Once accepted, the artifact is cataloged, measured and photographed. Each piece is preserved in its original form, which can include grass stains, dirt and other foreign matter than combined to tell the tale of the artifact’s history. In cases where an artifact’s composition could be compromised (such as a jersey soaked in alcohol following a clubhouse celebration), the piece will be conserved to sustain it as long as possible.

At any given time, about 15 percent of the Museum’s 40,000-plus three-dimensional artifacts are on display in the Museum. 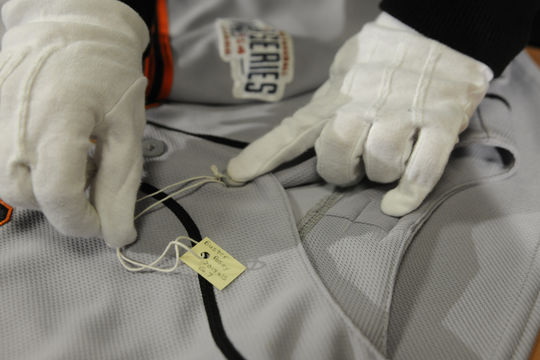 Get your postseason gear