They are iconic pieces of the United States, parts of Americana as old as the country itself.

Stamps and coins, therefore, have a natural and enduring connection to the National Pastime.

In 2014, the United States Mint – via the National Baseball Hall of Fame Commemorative Coin Act – issued $5, $1 and half-dollar coins in celebration of the Museum’s 75th anniversary, and record numbers were purchased. The coins were another in the long line of coins and stamps issued by the government to celebrate baseball.

Put your stamp on it

It may be hard for young fans to imagine, but in the distant past – before the invention of the Internet, Facebook, Twitter, and InstaGram – there was a primitive way people communicated called a “letter”.

The letter was written on paper with implements such as pens and pencils using ink and lead. In order to pay the cost of transporting these letters the sender purchased something called a “stamp” - which collectors and historians have long valued as one of the iconic symbols of our nation.

These stamps, typically about one-inch square, were – and are – emblazoned with colorful photos and artwork. Early stamps featured American heroes like George Washington and Benjamin Franklin, and American symbols like the flag, the Grand Canyon or the Golden Gate Bridge.

In 1939, 100 years after the mythical birth of baseball in Cooperstown, N.Y. and more than 150 years after the American Revolution, the first stamp commemorating the grand American game of baseball was issued. Another 30 years passed before the second baseball-themed stamp was released in 1969 marking another centennial anniversary, this time baseball’s debut as a professional sport when the 1869 Cincinnati Red Stockings took the field for the first time with salaried ballplayers. 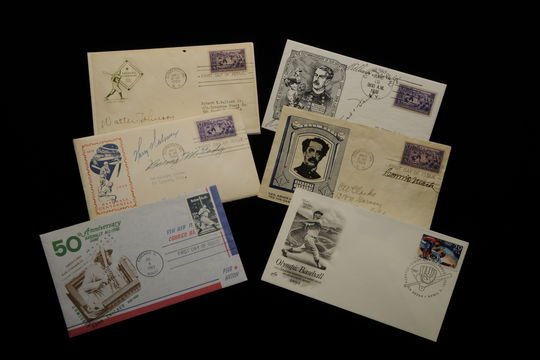 Stamp cachets with Hall of Fame-themed stamps have become a favorite of collectors around the world. Many feature cancellations from the Cooperstown Post Office. (Milo Stewart, Jr., National Baseball Hall of Fame Library)

“The Post Office began to realize that while many of their new releases drew little or no attention, there was always a strong interest in baseball stamps”

Since then, the pace of baseball-themed stamps has accelerated. Stamps have been issued honoring individual players, classic ballparks, tributes to the Negro Leagues and Olympic baseball,.

Baseball-themed stamp collectors debate whether a 1969 stamp honoring American folk artist Grandma Moses should be included since artwork depicted on her stamp included a ball game in the background, or whether multi-sport athlete Jim Thorpe’s 1984 stamp should qualify even though he’s portrayed in a football uniform. The talented Thorpe also spent six years in major league baseball and appeared in the 1917 World Series.

In all, more than 50 stamps undeniably qualify as portraying baseball from many different angles.

“The Post Office began to realize that while many of their new releases drew little or no attention, there was always a strong interest in baseball stamps,” explains Pete Henrici, owner of the Baseball Nostalgia shop located in the shadow of Doubleday Field in Cooperstown. Henrici offers a large collection of “first day covers”, a term referring to an envelope with a postmark issued on the first day of a stamp’s release. For baseball stamps, the gold standard is to have a cover bearing the postmark of the Cooperstown, N.Y. post office.

The release of the stamp on June 12, 1939 was meant to coincide with the opening of the National Baseball Hall of Fame and Museum, appropriately situated in the tiny, upstate New York village where General Abner Doubleday was thought to have invented the National Pastime. The 1939 stamp was the brainchild of Postmaster General James A. Farley, a rabid baseball fan, and President Franklin D. Roosevelt, a fan and stamp collector himself.

In announcing the upcoming stamp’s release the President stated, “Every boy in America could get a first-day cover”. As a result of this bold promise, the Cooperstown post office was flooded with requests from boys, and presumably some girls, many of who sent requests without the required self-addressed envelope and three cents for the stamp, the going rate for first-class postage in 1939.

According to Post Office regulations, such requests should have been denied, but Cooperstown postmaster Melvin Bundy stepped in to save the day. Reaching deep into his own pockets, reportedly Bundy covered the cost of both stamps and return envelopes to satisfy the longings of thousands of American youth and fulfill President Roosevelt’s promise.

President Roosevelt was an avid stamp collector who enjoyed autographing both covers and sheets of stamps that he gave as gifts to friends and admirers. At the 1939 opening of the Baseball Hall of Fame and Museum, Postmaster General Farley was in attendance and secured signatures of many of the players on hand on a sheet of the 1939 centennial stamps which he later presented to the President.

Over 81 million stamps were produced, and the 1939 baseball centennial stamp remains a popular item for both philatelists (those who specialize in collecting stamps) and baseball memorabilia collectors.

An interesting footnote is the question of whether the centennial stamp should rightly be considered the first baseball stamp issued by the U.S. government, or whether that designation should be given to a 1934 Philippine stamp featuring a batter and catcher marking the Manila Far Eastern Championship Games. From 1898 until its independence in 1946, the Philippine islands were under control of the United States, so a technical case could be made that the first baseball-themed stamp issued under government auspices was, in fact, the 1934 Philippines issue.

If there is an abundance of baseball stamps for philatelists and baseball memorabilia collectors to pursue, the catalog of baseball-related coins is much thinner. The U.S. Mint releases a handful of commemorative coins each year, and although issued in specific denominations, these coins are not meant for public circulation but rather go straight to the collectors’ marketplace.

The first baseball-themed commemorative was produced in 1992, baseball’s first year as an Olympic event, in conjunction with that summer’s Olympics in Barcelona, Spain. The coin, featuring a pitcher closely resembling Nolan Ryan, was part of a three-coin set.

Three years later in 1995 baseball reappeared as subject of another commemorative, once again connected to the Olympics. This time it was in anticipation of games to be held in Atlanta, Ga. the following year. Again, the baseball coin was flanked by coins featuring other Olympic sports.

All this was prelude to the big event in the baseball coin world. In 1997, the 50th anniversary of Jackie Robinson’s historic breakthrough into Major League Baseball, the U.S. Mint marked the occasion by producing $1 silver and $5 gold coins, each portraying the fiery Robinson sliding in his classic steal of home in the 1955 World Series. The release also represented the first African American featured on a U.S. commemorative coin. 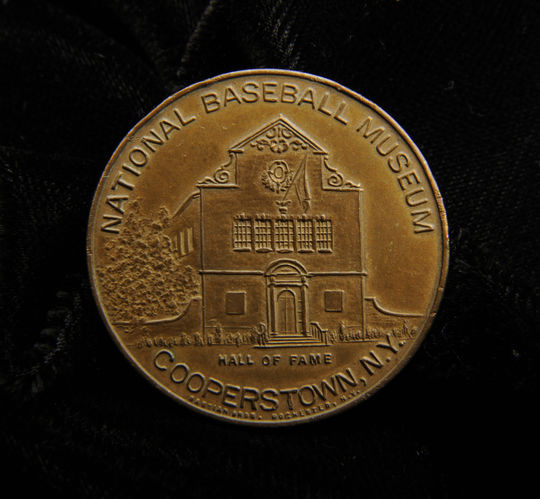 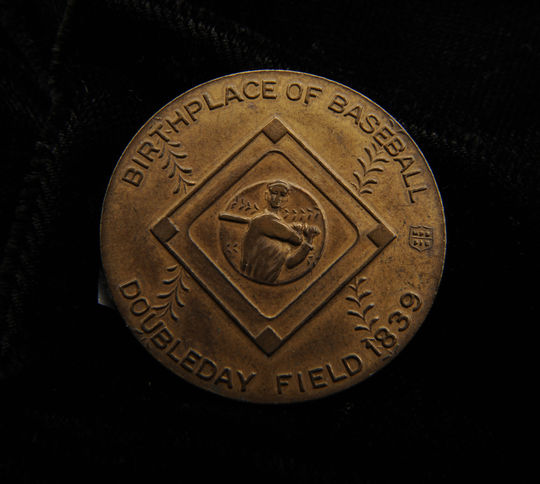 The reverse of the collectible coin from the Museum’s collection celebrating the Hall of Fame. (Milo Stewart, Jr. / National Baseball Hall of Fame) 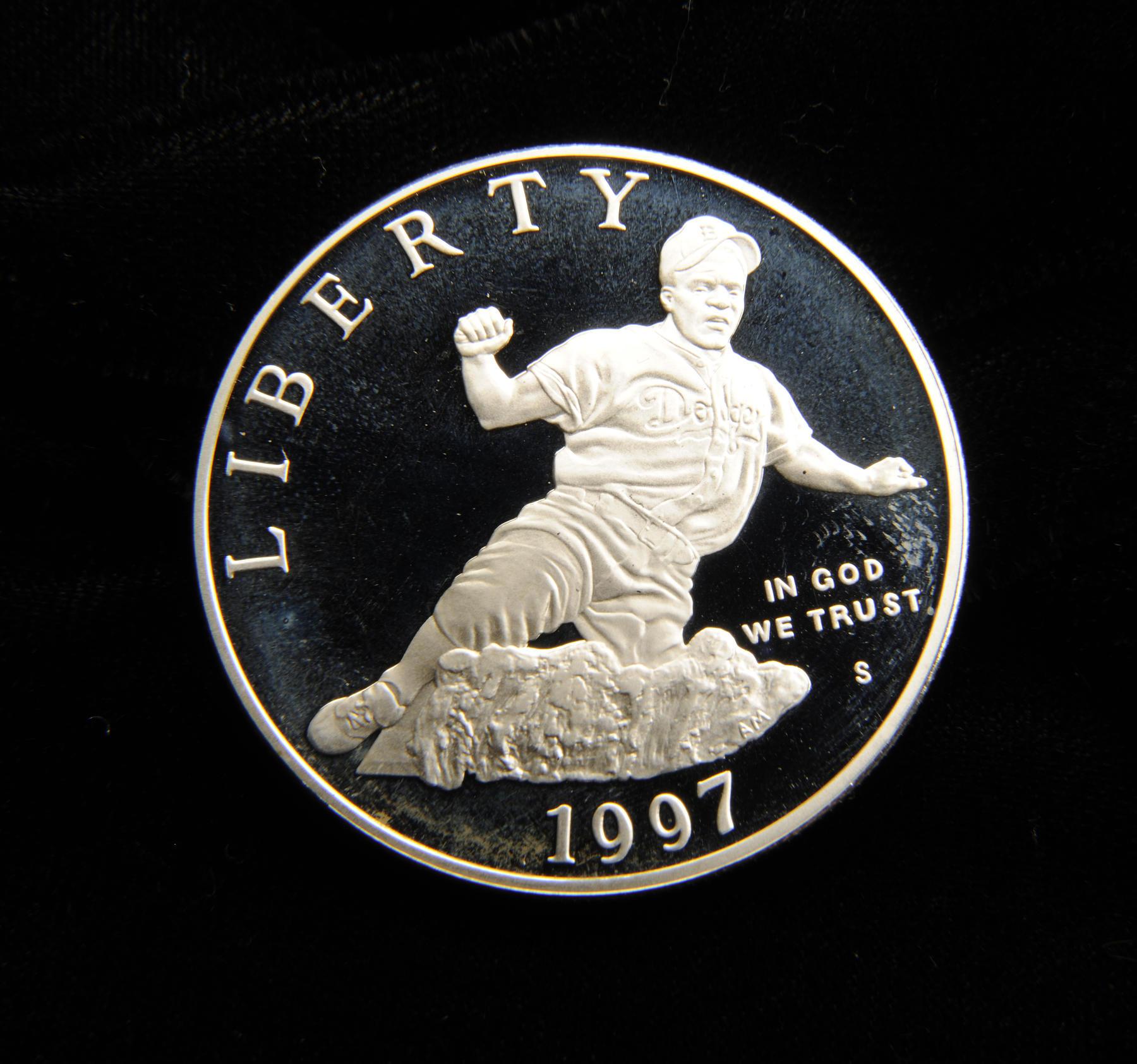 This one dollar Jackie Robinson coin was produced by the United States Mint in 1997. Pictured is the obverse side of the coin. B-68.2008 (Milo Stewart, Jr. / National Baseball Hall of Fame)

Only 5,174 of the most desirable “uncirculated” Robinson $5 gold coins were released, which makes it “the lowest mintage U.S. commemorative produced since 1982,” according to Jamie Hernandez, price guide editor of Professional Coin Grading Service. He adds, "Because of its low mintage, it's also the most valuable of any gold modern commemorative coin."