Jim ‘Catfish’ Hunter took the ball for baseball’s most famous teams in the game’s biggest moments. The soft-spoken Billy Williams excelled in the shadows of popular teammates Ernie Banks and Ron Santo.

Though the two players were markedly different in personality and notoriety, they will always share one memorable day in common. On Jan. 14, 1987, Hunter and Williams learned that they had been elected to the Hall of Fame.

“I don’t know whether to laugh or cry,” Williams said of the happy news. “It hasn’t sunk in yet. I can truly say it’s one of the most exciting moments of my life.”

Hunter and Williams, along with Negro Leagues star Ray Dandridge, went on to see their plaques hung in Cooperstown during the Hall’s annual induction ceremony on July 26. Hunter’s third time on the ballot proved to be the charm, while Williams gained entrance on his sixth try. Dandridge, meanwhile, had played his final game back in 1948. 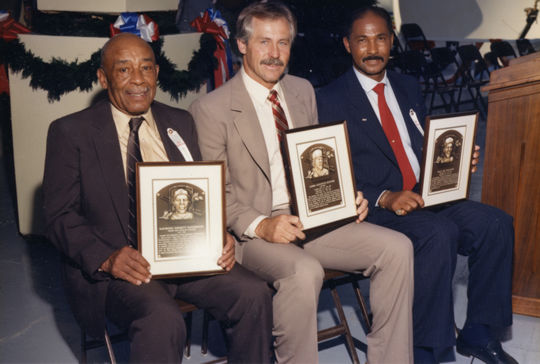 “I guess the smile on my face tells it all,” said Williams, representing the emotions of all three men. “‘Wait until next year’ is now a phrase of the past.”

Williams’ path to the Baseball’s Mecca was remarkable, considering that his high school in tiny Whistler, Ala., didn’t have a baseball team, and that he turned down an athletic scholarship to play football and baseball at Grambling State University.

Williams got his chance when he filled in for his brother on the semi-pro Mobile Bears baseball team. In 1956, Williams was signed by the Chicago Cubs at age 17 and then proceeded to hold down the left field position at Wrigley Field for more than 15 seasons.

Garnering the nickname “Sweet Swingin’ Billy” for his polished swing, Williams led the National League in total bases three times and broke Stan Musial’s NL record for consecutive games played in 1969. He finished second in MVP voting in 1970 after collecting 205 hits and 137 runs scored, and finished second again in 1972 after posting a league-leading .333 batting average. 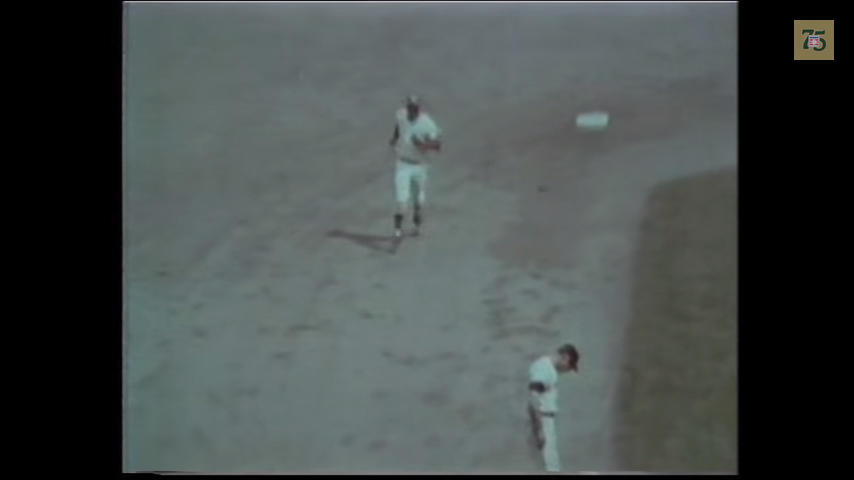 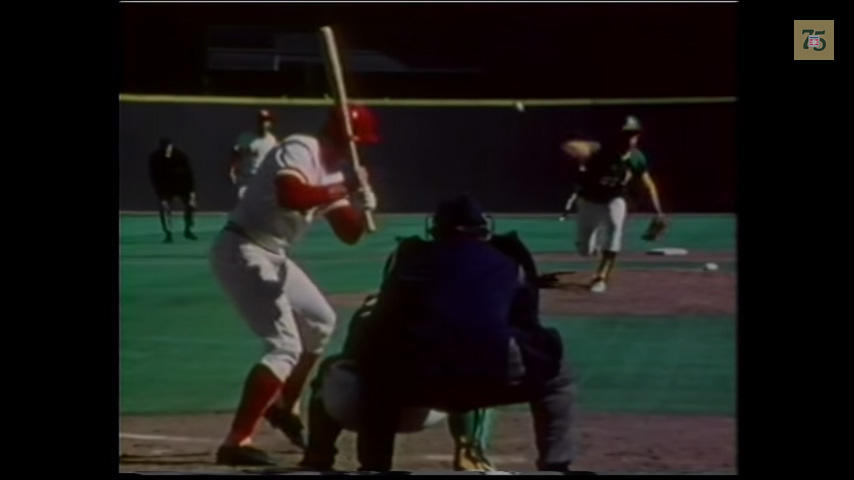 “When he was hot, it was as though they had put a giant tee in front of him with the ball on it, and said, ‘Here Billy, hit it,’” observed a longtime Cubs fan. “The ball came off his bat like a drive from a golf club.”

While Williams was reserved, the gregarious Hunter thrived in the spotlight and was always ready to crack a light-hearted joke.

“For 15 years, Hunter had a barrel of fun to match his truckload of victories,” wrote Newsday’s Steve Marcus. “The right-hander’s fastball could not match the fast delivery of his tongue. When he came from Oakland to New York, he became the Yankee quipper.”

Once he walked to the mound, however, Hunter was all business. On May 8, 1968, Hunter tossed the American League’s first perfect game in over four decades and added three hits at the plate in a 4-0 victory against the Twins. When the A’s built their dynasty, Hunter was their anchor on the mound: He compiled a combined 4-0 record and 2.19 ERA during Oakland’s World Series three-peat from 1972-1974.

In 1975, Hunter sent shockwaves through the sport when he was declared a free agent on a technicality and signed a 5-year, $3.75 million deal with the Yankees that made him the highest-paid player in baseball history. The investment was well worth it for the Bronx Bombers, as Hunter helped New York capture two long-awaited pennants in 1977 and 1978.

“You started our success,” Yankees owner George Steinbrenner told Hunter upon his induction. “You were the first to teach us how to win.”

Cap worn by Oakland ace Jim "Catfish" Hunter while throwing a perfect game against the Minnesota Twins on May 8, 1968. - B-141-68 (Milo Stewart, Jr. / National Baseball Hall of Fame)

Twenty-five Hall of Famers were on hand in Cooperstown to induct the Class of 1987, and each inductee’s speech was memorable for different reasons.

Hunter’s speech was predictably jovial. He was introduced by Commissioner Peter Ueberroth, who told the crowd, “Catfish earned the distinction of playing for (A’s owner) Charlie Finley and George Steinbrenner, which is enough in itself to put a player into the Hall of Fame.” Hunter followed with his own one-liner, saying, “My three brothers taught me how to throw strikes, and thanks to them I gave up (374) home runs in the big leagues.”

Williams, who was actively seeking a managerial role within the Cubs organization at the time, delivered a passionate speech that sent an important message to both fans and participants of the game.

“Questions have been raised by the media over the past several months about the participation of blacks and other minorities in the upper echelon of baseball,” Williams said. “The question would never have been raised if every job in baseball had been open to all races, creeds and nationalities, but this is not the case.”

Dandridge, who played 16 seasons in the Negro Leagues and retired shortly after Jackie Robinson entered Major League Baseball in 1947, echoed many of Williams’ sentiments.

“I’m sad in one way and glad in another,” Dandridge told the crowd. “I’m glad I’m here today; but I’m sad I wasn’t in my prime when the color barrier was broken. The only thing I can say is it’s a great credit to baseball that the game hasn’t forgotten those who were born too early.”

After the ceremony was over, Hall of Famer Willie Mays told Dandridge – his former mentor – that he was not born too early, but rather that “baseball woke up too late.” 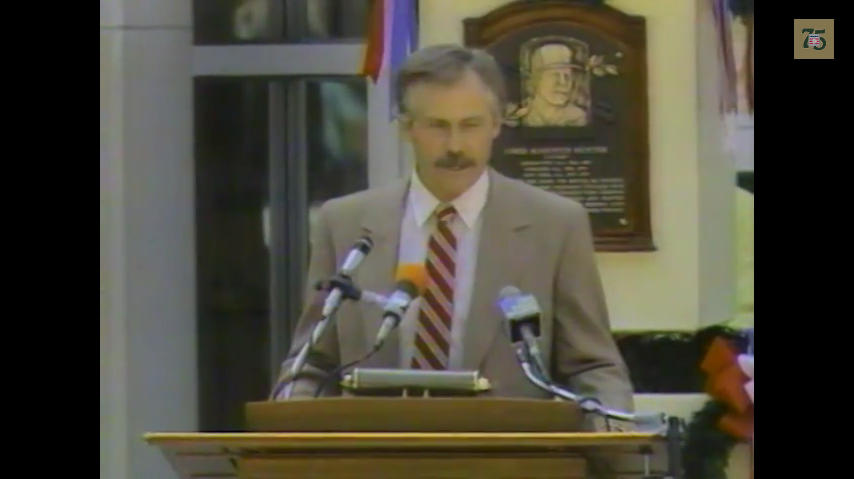 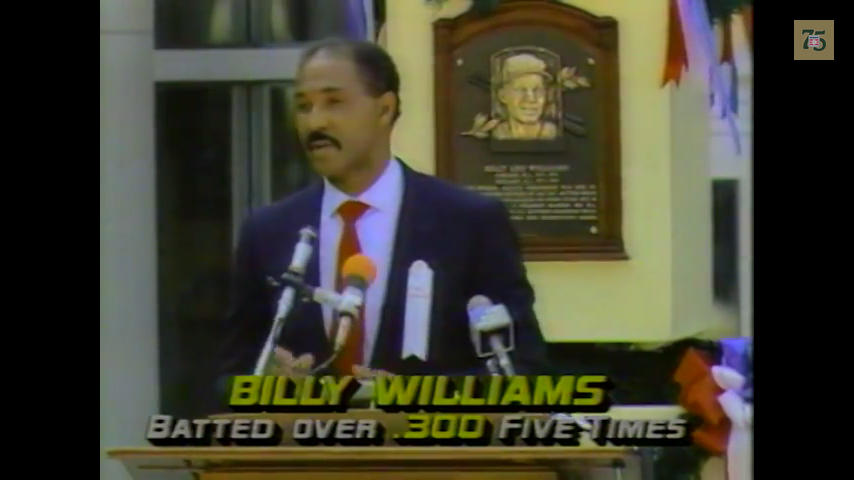