When Casey Stengel signed his managerial contract with the New York Mets at 74 years old, he characteristically joked to the media that he wouldn’t quit “until the time comes they have to push me out to the mound in a wheelchair to change pitchers.”

Known for his wild imagination and flair for the eccentric, Stengel wasn’t far off with his prediction. Less than one year later, the “Old Perfessor” would find himself at the center of the Mets clubhouse, leaning on a black cane for support. He’d give his retirement speech – in one part English, one part Stengelese – as his former players eagerly took in every last drop of colorful prose and sage wisdom the future Hall of Famer had to offer.

On Aug. 30, 1965, the seemingly ageless Stengel announced that he would no longer manage the Mets.

“Before [my hip injury], I didn’t know I was gonna retire,” Stengel explained to his players. “After my operation, I thought I was gonna strut out of here in four weeks. But then I knew I couldn’t make it.” 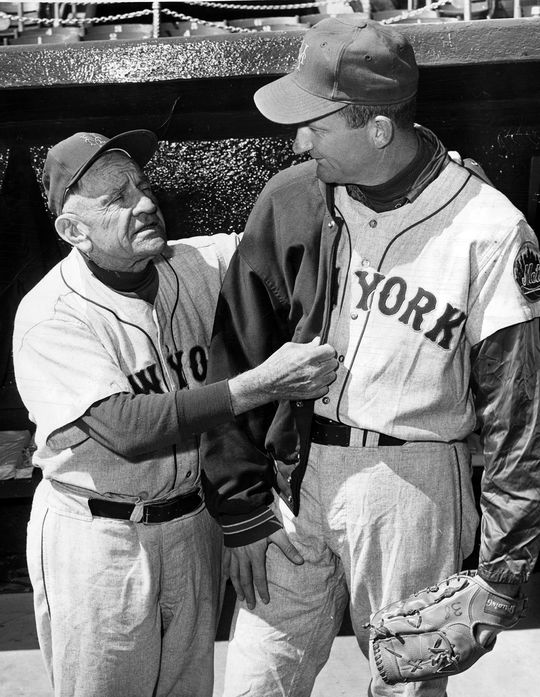 Many of Casey Stengel's players said they saw him as a father-figure of sorts, because of his ability to relate to them on a personal level. Pictured above, Stengel drapes a jacket over the shoulders of Mets pitcher Roger Craig. (National Baseball Hall of Fame and Museum)

“Wes Westrum is running the club good and the coaches are assisting him good,” he continued. “You got one more month to go and if you play good, you fellas might make a great finish.”

Baseball without Stengel was almost unfathomable. His illustrious career spanned from the Dead Ball Era to the Expansion Era – a whopping 54 years of quotable remarks and colorful quirks. But all joking aside, by the time he’d decided to retire, Stengel had widely earned a reputation as an astute – albeit, zany – baseball mind. After starting his managerial career with the Brooklyn Dodgers and the Boston Bees/Braves, he led the New York Yankees to 10 pennants and seven World Series titles – five of them, consecutive (1949-53). His biggest challenge was saved for last, as the manager tasked with breaking in the New York Mets in 1962. But earned the respect of his fresh-faced club, nonetheless. 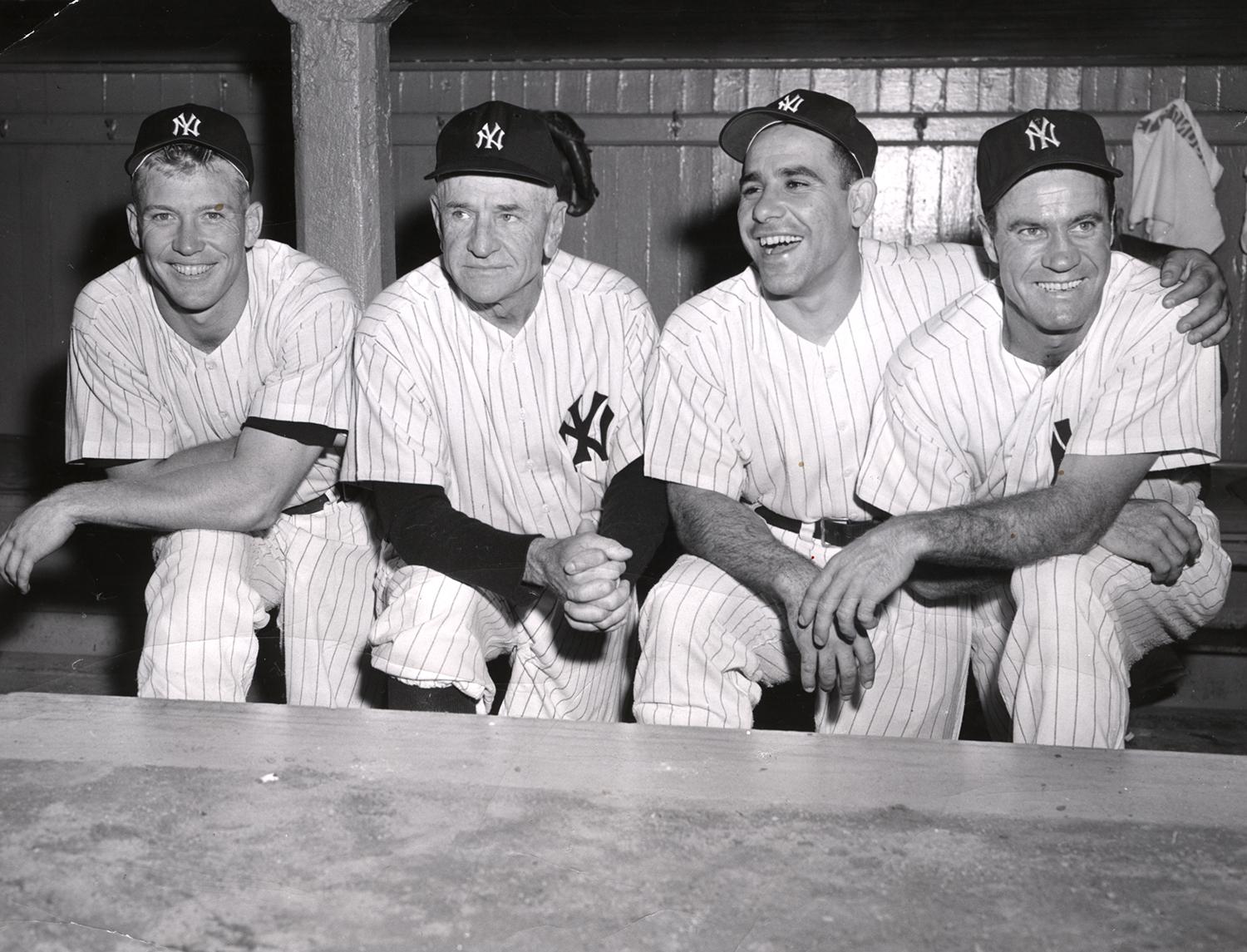 Casey Stengel was at the helm of the New York Yankees from 1949-1960, leading them to 10 pennants and seven World Series titles. From left, Mickey Mantle, Stengel, Yogi Berra and Hank Bauer pose in the dugout.(National Baseball Hall of Fame and Museum)

“Without Casey, there’s got to be a difference,” Mets rookie outfielder Ron Swoboda told The New York Times. “He means so much to baseball and to guys like me trying to break in. This is a tough place to learn the game – the big leagues – but Casey gave me that chance.”

Others, like New York Yankees outfielder Hank Bauer, saw the brilliance of the “Old Perfessor” after they’d parted ways.

“He’s a remarkable man,” Bauer said to the Boston Globe. “I never realized that he was prolonging my major league career by five years. He was platooning me against left handers and I was beating their brains out, he’d sit me on the bench a few days and I’d be so darned mad that when I got back in the lineup, I thought only of showing the old guy how wrong he was. It worked, and we won.”

Following his retirement in 1965, Stengel remained with the Mets as a West Coast scout in California. Coyly refusing to rule out a return as manager – “you never know what will happen later” – the “Old Perfessor” would find himself on baseball’s most prestigious team just one year later, with his induction to the Hall of Fame.

“Casey knew his baseball,” fellow Hall of Famer Sparky Anderson would later say of Stengel. “He only made it look like he was fooling around. He knew every move that was ever invented and some that we haven't even caught on to yet." 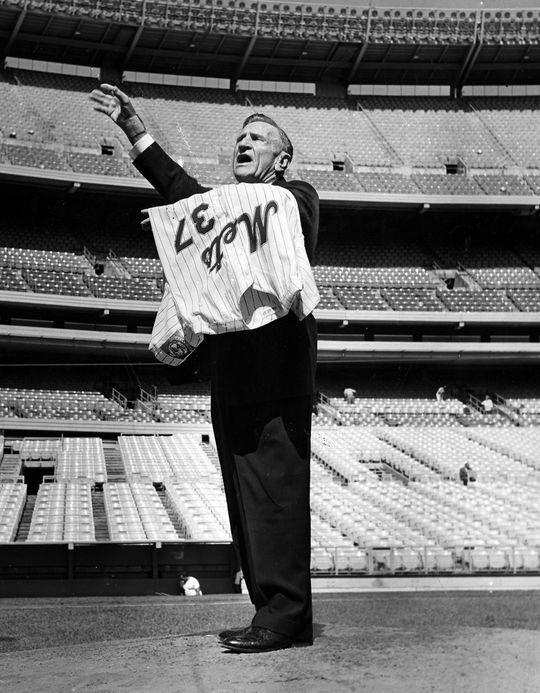 Casey Stengel, pictured above, salutes Shea Stadium prior to his number retirement ceremony in 1965. (National Baseball Hall of Fame and Museum) 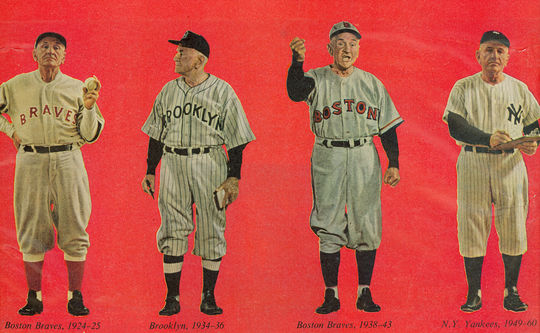 Casey Stengel managed four teams over his 25 years as a skipper: the Boston Braves/Bees, the Brooklyn Dodgers, the New York Yankees and the New York Mets. (National Baseball Hall of Fame and Museum) 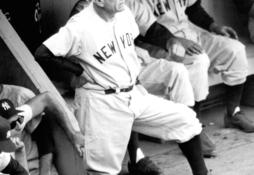