Former big league sluggers Bobby Abreu and Garrett Jones each launched a pair of homers in the friendly confines of historic Doubleday Field to the delight of 4,179 fans at the 12th edition of the Hall of Fame Classic legends game.

Despite a threatening forecast and some intermittent raindrops, it was a perfect day for baseball after a two-year absence of this event that for some marks the unofficial start of summer. In the end, with temperatures in the mid-60’s, Team Ozzie, led by Hall of Fame shortstop Ozzie Smith, defeated Team Fergie, skippered by Hall of Fame pitcher Fergie Jenkins, by a score of 10-7 during the Memorial Day Weekend affair played on May 28. Serving as coaches were fellow Hall of Famers Wade Boggs, Tim Raines, Ted Simmons, Lee Smith and Alan Trammell.

The victors were led the Jones, named the Bob Feller Player of the Game, who finished with six RBI to go along with his pair of round-trippers.

“I guess it was just muscle memory,” said Jones. “The first one, I knew was gone. The second one, I was a little off balance. But this is just the best place in the world, so I guess it was meant to be.”

Team Ozzie got off to a fast start with three runs in the bottom of the first, two coming Jones homer over the right field fence. 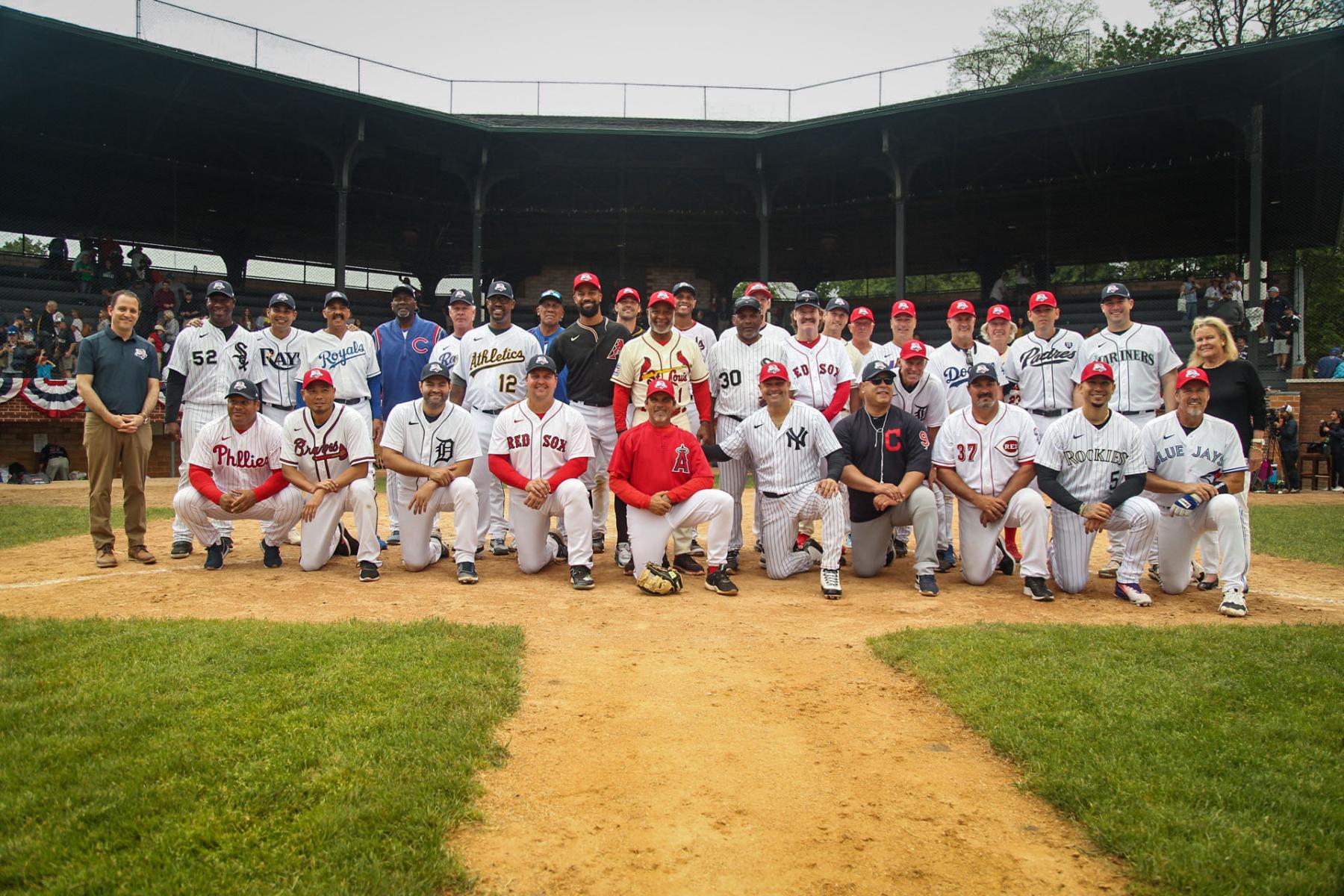 Members of Team Ozzie and Team Fergie pose with Hall of Fame Chairman of the Board Jane Forbes Clark, right, and Hall of Fame President Josh Rawitch, left, following the May 28 Hall of Fame Classic in Cooperstown. (Parker Fish/National Baseball Hall of Fame and Museum)

A single run in the second and a pair in the third helped Team Fergie tie it up 3-3 after three innings, Abreu’s towering solo shot down the right field line was a highlight.

Team Ozzie took control with three runs in both the fifth and sixth innings, with Jones’ three-run shot to right-center giving his team an insurmountable 10-4 lead.

Before the game, a Home Run Derby that started with eight players – Abreu, Carlos González, Jones, Justin Maxwell, Carlos Peña, Matt Wieters, Nick Swisher and Chris Young. In the end, and for the first time in Classic history, there were co-winners, with both González and Maxwell smashing balls over the outfield fence and onto rooftops and into trees. 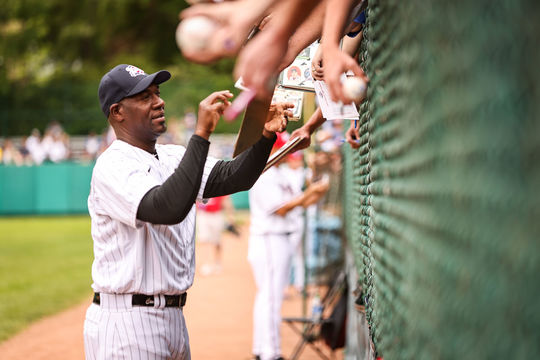 José Contreras signs autographs for fans at the May 28 Hall of Fame Classic in Cooperstown. (Parker Fish/National Baseball Hall of Fame and Museum)

“It was awesome. It was a blast,” said Maxwell. “I’ve got my son with me and I couldn’t disappoint him so I had to make sure I was focused and ready. I’ve never competed in a Home Run Derby before, so what better place to do it than Cooperstown.”

Gonzalez added, “I was so excited. Just being able to be here in such a special place with a lot of legends. I told myself when I stepped on the plate to do my best because this is the place to show the best of you. Just to be here swinging the bat and playing the game we’ve loved since we were kids. This is an amazing experience for me.” 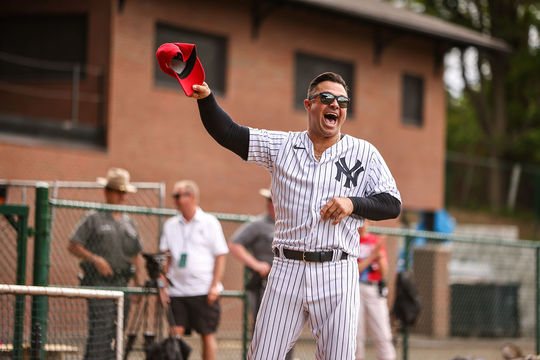 Nick Swisher tips his cap to the Doubleday Field crowd at the 2022 Hall of Fame Classic. (Parker Fish/National Baseball Hall of Fame and Museum)

“I’m sure everybody’s excited to get back on the field after having a couple years off. I’m really looking forward to it,” said Stauffer, who was raised in nearby Saratoga Springs, N.Y. and played at Doubleday Field as a high school student, before the game. “It’s pretty special to be included and being able to have my son come out here.”

Baerga called it “one of the most beautiful places that I’ve ever been.”

“I say to everybody if you have the opportunity go to Cooperstown because you’re going to enjoy it. This is my fifth trip. People need to realize the history of this great game. They believe that it started a couple years ago.” 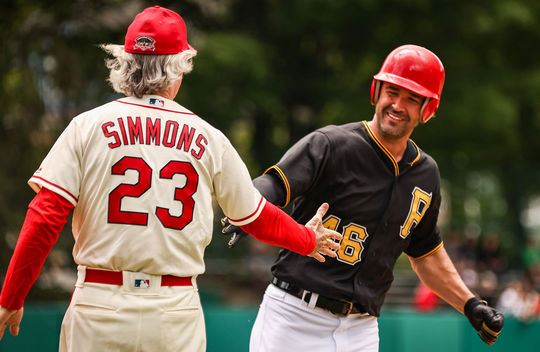 Garrett Jones is congratulated by Hall of Famer Ted Simmons after hitting one of his two home runs at the May 28 Hall of Fame Classic. (Parker Fish/National Baseball Hall of Fame and Museum)

David Freese, while visiting the National Baseball Hall of Fame and Museum, was able to see his donated torn home jersey and a bat he used in the 2011 World Series.

“It’s just crazy coming here and actually seeing this place. It’s special. You’re surrounded by greatness,” Freese said. “As for my donations, it gives a lot of people a lot of memories to live on. Was it a no brainer when I was asked to come up here representing the Cardinals? Yeah, it was.”