Lasorda embodied the spirit of the game for a lifetime

He was the heartbeat of his franchise for parts of eight decades, bleeding Dodger Blue as a pitcher, scout, coach and manager.

Thomas Charles Lasorda was the Dodgers, and his love for his team was only surpassed by the adoration of his fans. 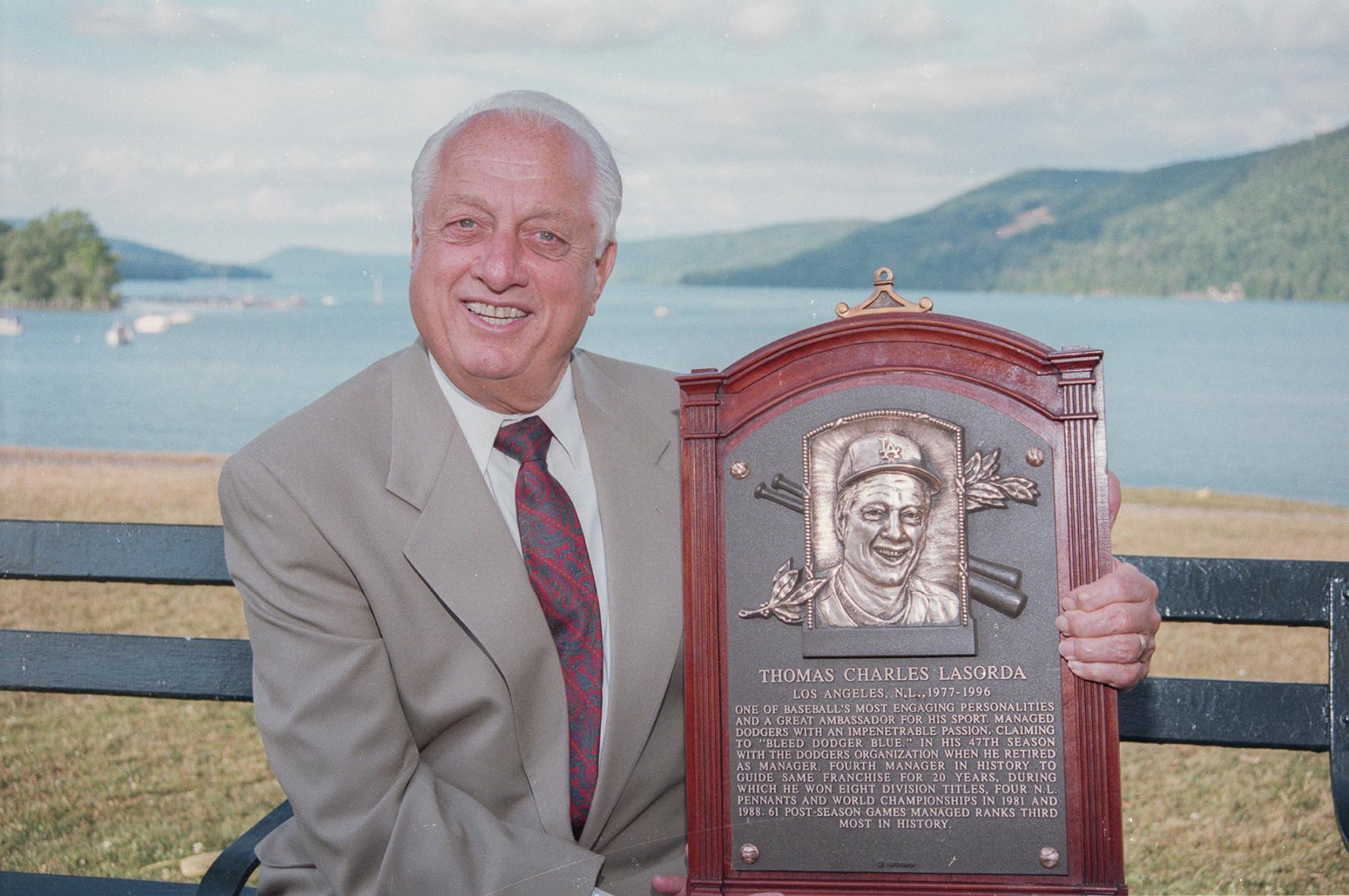 Tommy Lasorda was elected to the Hall of Fame in 1997. (Milo Stewart Jr./National Baseball Hall of Fame and Museum)

Lasorda, who managed the Los Angeles Dodgers from 1976-1996, died on Jan. 7, 2021, at the age of 93. He was inducted into the National Baseball Hall of Fame in 1997 following a career in which he won 1,599 games, two World Series and two more National League pennants – all with the Dodgers.

“Tommy Lasorda enjoyed a remarkable life in baseball," said Jane Forbes Clark, Chairman of the National Baseball Hall of Fame and Museum. "His legacy will be one of determination, leadership, and perseverance. Those wonderful characteristics that he carried, not only through his career, but throughout his life, and his passion for the game and for the Hall of Fame, will be greatly missed in Cooperstown. We extend our deepest sympathies to his dear wife of 70 years, Jo, the entire Lasorda family and the Dodgers organization.”

Lasorda was born Sept. 22, 1927 in Norristown, Pa. He got his start in professional baseball at the age of 18 as a southpaw pitcher when he signed with the Phillies in 1945. His career was interrupted when he served two years in the military.

In 1948, Lasorda made a historic return to the baseball scene with the Schenectady Blue Jays as he authored a 25-strikeout performance. In 1949, the Dodgers drafted him from the Phillies, and he made a new home pitching for the Greenville Spinners and the Montreal Royals. During his time with the Royals, Lasorda led his team to four minor league championships.

Lasorda made his major league debut on Aug. 5, 1954 with the Brooklyn Dodgers. He played for the Dodgers for two seasons before being traded to the Kansas City Athletics, where he pitched for one season. After a few more stops, Lasorda returned to the Montreal Royals in 1958 and led them to another championship and won the International League’s Most Valuable Pitcher award.

Tommy Lasorda was active in the Dodgers' organization for parts of seven decades. (Brad Mangin/National Baseball Hall of Fame and Museum)

After the 1960 season, Lasorda ended his playing career and became a scout for the Dodgers until 1965, when he took his first managerial job with the Dodgers’ Pioneer League affiliate in Pocatello, Idaho. In 1966, he moved to the Ogden Dodgers and led them to three consecutive Pioneer League championships. From 1969-1972, Lasorda skippered the Triple-A Spokane Indians and Albuquerque Dukes in the Pacific Coast League. He was voted as the Sporting News Minor League Manager of the Year in 1970, and his 1972 Dukes won the Pacific Coast League championship.

In 1973, Lasorda made his way back to the majors as a third base coach for the L.A. Dodgers under another future Hall of Fame manager: Walter Alston. Alston retired in 1976 after 23 years with the Dodgers, and Lasorda took the reins. 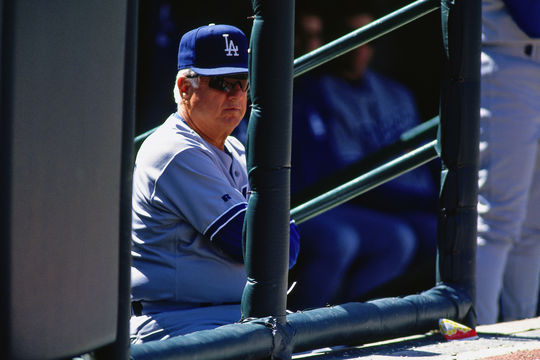 In his first two full seasons at the helm, Lasorda led the Dodgers to two straight National League championships – and became the first NL manager to win pennants in their first two seasons. After losing to the Yankees in both the 1977 and 1978 World Series, the Dodgers went on to win the World Series over the Yankees in 1981. They defeated the Oakland A’s in the 1988 World Series to give Lasorda his second title, and he won his second Manager of the Year Award that year (following his first in 1983).

“Tommy was a great motivator,” said former Dodgers coach Danny Ozark. “He treated his players and coaches tremendously, and everyone on the team would do anything for him.” 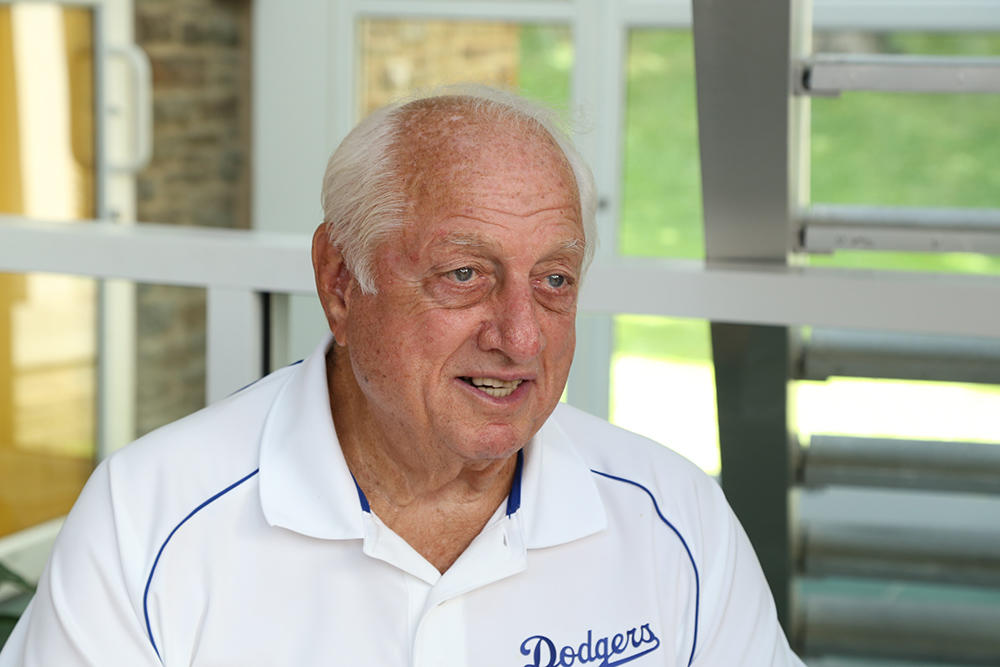 Lasorda managed four All-Star Games for the NL, and nine of his players won NL Rookie of the Year awards. Lasorda continued to lead the Dodgers until his retirement in 1996. By that time, he had built up a total of 3,038 games managed, with a record of 1,599-1,439.

“I’ve been asked many times to sum up Tommy Lasorda in one word, and that one word is ‘enthusiasm,’” former Dodgers owner and president Peter O’Malley told Gannett News Service when Lasorda retired as manager on July 29, 1996. “Enthusiasm to his family, his friends and this organization.”

After retirement, Lasorda stayed busy working in baseball. In 2000, he managed the U.S. Olympic Baseball Team to a gold medal in the Sydney Summer Games. He also continued to represent the team publicly and working in the front office, always claiming he bled Dodger Blue. 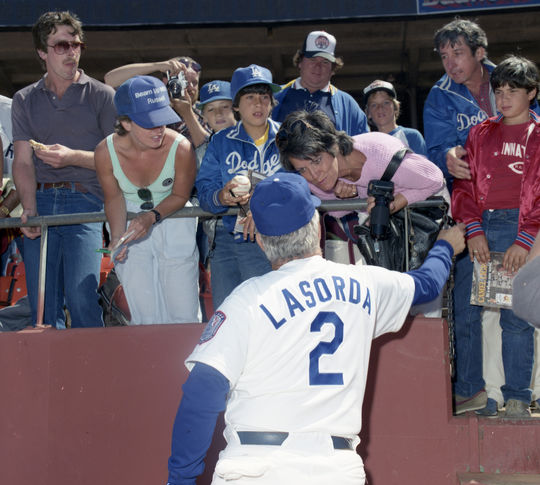 One of the most recognizable managers of his era, Tommy Lasorda became synonymous with the Los Angeles Dodgers. (Doug McWilliams/National Baseball Hall of Fame and Museum)