“I bet a lot of those ended up in bicycle spokes,” Fingers said. “There’s a lot of people who wish they could have those back.”

While turning back the clock to a time before baseball cards could double as investments may be impossible, fans can enjoy the Williams card and thousands more like it in Shoebox Treasures, which opened May 25, 2019, on the Museum’s third floor.

Arranged over 700 square feet adjacent to the Museum’s Autumn Glory exhibit, Shoebox Treasures tells the story of the history of collectors’ cards, dating back into the mid-19th century. The exhibit features more than 2,000 of the Museum’s unparalleled collection of almost 200,000 baseball cards, as well as cards from the PWCC Vault. 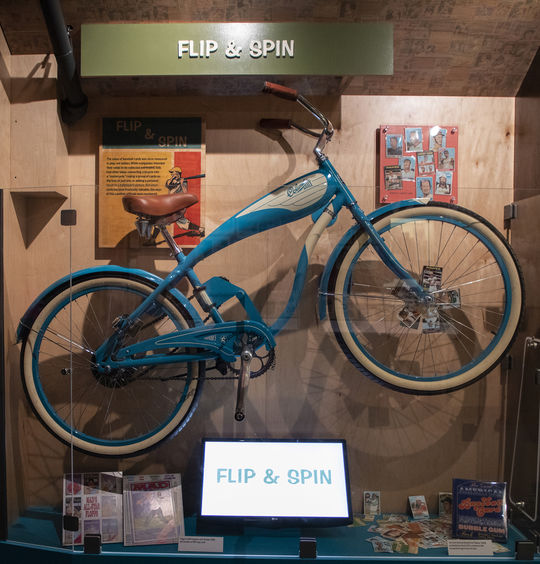 Millions of baseball cards ended up attached to bicycles over the years to produce a motorcycle-like noise when they smacked against the spokes of the bike’s wheel. Visitors to the Hall of Fame’s Shoebox Treasures exhibit can relive this experience with an interactive display. (Milo Stewart Jr./National Baseball Hall of Fame and Museum)

Shoebox Treasures also includes non-baseball cards, artifacts – like card-organizing items – that sprang up as the industry grew, and an interactive portion that lets visitors make their own virtual baseball cards.

And for those whose cards ended up on the wheel of their bicycle, there’s an authentic pedal bike that replicates the magical sound of cards from bygone days.

Along with the Williams card, nine other “Holy Grail” cards are on display in Shoebox Treasures – each protected by VariGuard SmartGlass. The special glass blocks 99.5 percent of all light, protecting the cards from fading, but with the touch of a button becomes transparent to allow visitors to view the cards, including: 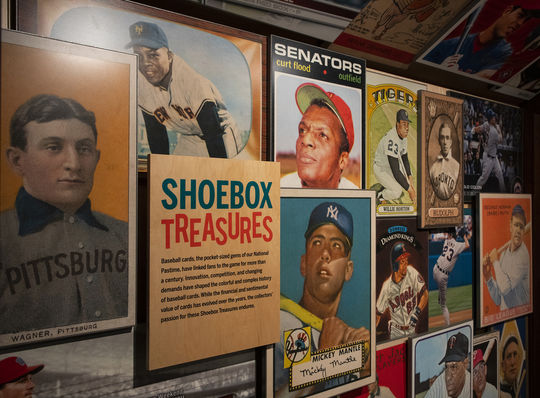 The Hall of Fame's Shoebox Treasures exhibit tells the story of the history of baseball cards in a 700-square foot exhibit on the Museum's third floor. (Milo Stewart Jr./National Baseball Hall of Fame and Museum)

- Peck & Snyder card c.1871 of the Mutual Base Ball Club of New York
- 1909-11 T206 Eddie Plank, loaned to the exhibit courtesy of Ken Kendrick
- 1909-11 T206 Honus Wagner
- 1914 Cracker Jack Christy Mathewson
- 1916 Sporting News Babe Ruth, on loan from the PWCC Vault
- 1923 Maple Crispette card of Casey Stengel, the only known example
- 1934 Goudey Napoleon Lajoie, which replaced the 1933 Goudey Lajoie that was unprinted
- 1949 Leaf Jackie Robinson
- 1952 Topps Mickey Mantle
- And the 1954 Bowman Ted Williams, which was removed from the market when Bowman learned that Williams had an exclusive deal with Topps; loaned to the exhibit courtesy of Ken Kendrick

Of course, each collector has his or her own examples of a “Holy Grail” – even Hall of Famers.

“I was on a Topps ‘rookie stars’ card in 1978 with Paul Molitor, U.L. Washington and Mickey Klutts,” said Alan Trammell, who was on hand in Cooperstown on May 25 along with fellow Hall of Famers Bert Blyleven, Goose Gossage, Trevor Hoffman, Tim Raines and Fingers to help open Shoebox Treasures. “Not bad company, and I think that card has some value today. 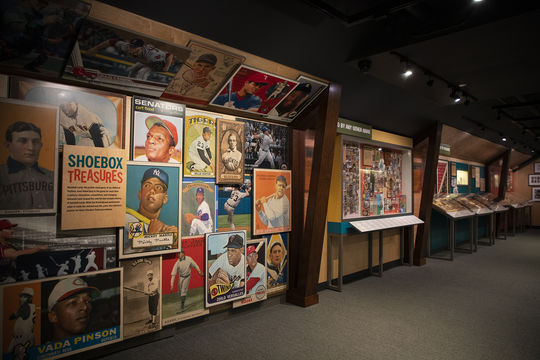 “The history of these cards is amazing, and the exhibit is just great. Anyone who comes here is going to have something they remember.”

A fundraising campaign to design, build and maintain the exhibit has already reached its goal thanks to generous donations from Ken Kendrick, Glenn Doshay and Bill Janetschek, with additional support from Tony and Nanar Yoseloff, and an outpouring of generous gifts from hundreds of Museum Members. The grassroots support has allowed the project to expand to include future cataloging and conservation work on the Museum’s collection of cards.