Playing the position of catcher seems pretty self-explanatory: “catch” the ball from the pitcher.

To accomplish this task, using a glove has always been the easiest option. But can you imagine if instead of a glove, you were supposed to catch the ball with your…chest? That would be the case if early baseball inventor James Bennet had his way.

In baseball’s early days, playing the position of catcher was neither safe nor simple. In fact, a catcher’s primary job was just to make sure the ball didn’t roll away, and thus the catcher played well behind home plate. This all changed in 1901 when the National League mandated that “a catcher must stand within the lines of his position whenever the pitcher delivers the ball and within ten feet of the home base.”

When this rule went into effect, catchers’ gloves hadn’t yet been developed to provide much protection or dexterity. James Bennet of Momence, Ill., came up with a very unique solution which he patented on March 22, 1904. His “Base-Ball Catcher” was a device that would eliminate the need for a glove at all. He designed a wire cage to be mounted on the chest which could receive the ball and drop it effortlessly into the catcher’s protected hands.

The invention had reinforced borders made of solid wood and was complete with springs under the cage to protect the catcher from the impact of the pitch. His device would allow for the position to be played safer, but prevented much mobility. 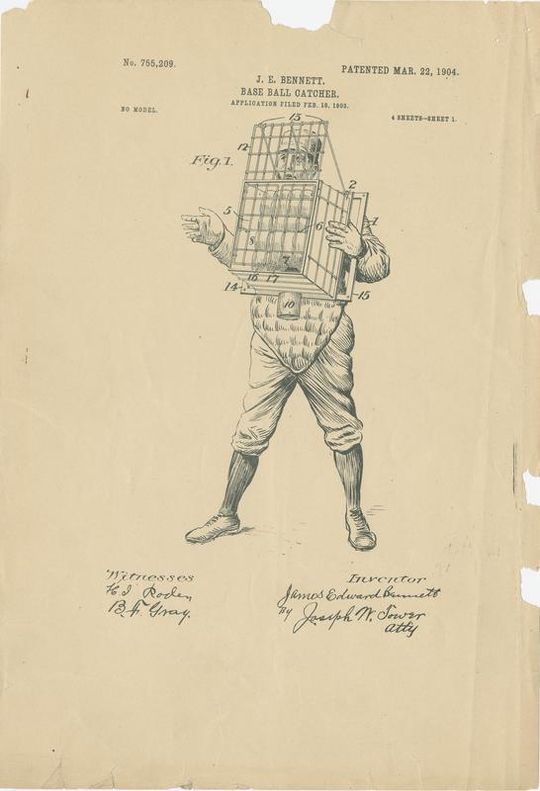 Inventor James Bennet’s solution to the lack of safe catcher equipment in the early 20th century. (National Baseball Hall of Fame and Museum)

Unfortunately for Bennet, his invention didn’t seem to “catch” on like he thought it would. It was never adopted in the big leagues and over time, the early catching mitts would evolve to make it easier for catchers to catch the ball and stay safe doing so.

The round, “pillow-style” mitt would become popularized throughout the early 1900’s – a precursor for the modern mitts used today.

But the patent Bennet was issued is now a part of the collection at the National Baseball Hall of Fame and Museum.

And although Bennet’s invention wasn’t as successful as he wanted, innovators like him are what has driven baseball to advance over the 150+ year history of the game.

Eric St. Peter was a 2019 membership intern in the Hall of Fame’s Frank and Peggy Steele Internship Program for Youth Leadership Development 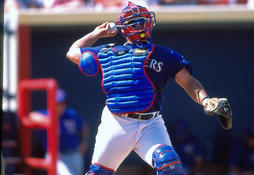