Start of a Fantasy

But where did fantasy gaming get its start? Well, it’s possible it began in Brooklyn, N.Y. – but much earlier than most baseball fans might have guessed.

Less than two years after General Robert E. Lee’s surrender at Appomattox Court House in Virginia ended the American Civil War in April 1865, a group of 10 women and four men, calling themselves the Recreation Club of Brooklyn, gathered on Dec. 8, 1866 to play an in-home wooden table-top game called Sebring Parlor Base Ball.

That much was reported on Dec. 22, 1866 when the New York Clipper newspaper ran a story entitled “Base Ball in the Parlor” noting the 14 Recreation Club members had gathered, split into teams of seven per side and begun simulating a full 9-inning baseball game and keeping recorded statistics.

The production of that data and its recording by a respected media outlet (the Clipper called the undertaking an “interesting and novel contest”), suggests there was not only appetite for fans to imagine themselves playing the national game but for third parties to reproduce the outcome.

This 1868 image of players enjoying Sebring’s Parlor Baseball was one of the first examples of “Fantasy Baseball” as played by fans of the game. (Collection of Tom Shieber)

So does Rotisserie baseball, the concept often credited to sportswriter Daniel Okrent in 1979, owe its humble beginnings to a wooden simulation game from the 1860’s? Loosely speaking, yes.

Sebring’s Parlor Base Ball was invented by Francis Sebring of Hoboken, N.J., and originally designed for a bed-ridden baseball player. It sold for the considerable sum of $5 and consisted of a two-foot-wide wooden board designed in the shape of the modern-day baseball home plate. Play involved propelling a coin (funneled along a ‘pitching’ slot) toward a ‘bat’ (the equivalent of a modern pinball flipper) that pushed the coin toward various holes in the board. If the coin fell into a hole, it was an ‘out’ but if it stayed on the board (in most cases) it was considered a ‘hit.’

At its core, this antique flipper game, made the emerging sport of ‘base ball’ more portable and more accessible for citizens who would not have been allowed to play (i.e., women), were unable to play (disabled) or for those wanting to ingest the game more frequently and with greater home-grown avidity.

The names of the participants that night in Brooklyn’s Recreation Club were obscured, with players revealed only as Miss Mary A.R. or Mr. B. In fact, both of the ‘teams’ playing that night were managed by women (Mrs. E.B. and Miss Jane T) with Mrs. B.’s team scoring nine runs in the top of the 9th to win 31-28.

It’s hard to imagine this is the very first sports “fantasy” game because clearly the players were not yet fully co-opting baseball stars the way fantasy players do today. Nonetheless, the Clipper described the founding 14 as “ladies and gentlemen, admirers of the National game and frequenters of the ball grounds on match days, as spectators.” And, in a separate story that appeared Dec. 8, 1866 in Frank Leslie’s Illustrated Newspaper, Sebring’s game was described as “the most attractive parlor game in vogue, and one in every way calculated to instruct ladies, youth, and amateur ball players in the theory of the national game.”

On the surface, the first Sebring players sound very much like the fantasy players of today. Their actual linkage, however, must journey along a continuum of wood, cardboard, dice, spinners, cards, monolithic computer mainframes, simplistic video games and the advent of the internet.

Historically, the facts reveal that within 30 years of Sebring’s invention, player-endorsed board games were all the rage. And instead of Mrs. B. or Miss Jane potentially imagining themselves as the batters or fielders, the wooden and cardboard games soon invoked the images of professional stars such as Cy Young, Dan Brouthers, John Montgomery Ward and Chief Zimmer.

Likewise, in-home board games continued to grow more detailed (and colorful) – and by the early 1900’s simulation baseball games were incorporating cards, dice, spinners, die-cut stadiums and miniature paper figurines meant to represent in-the-field players or base runners. But in almost every instance, the outcome of an at-bat was random and tied to human performance. In other words, the human player’s hand-eye skill (or luck with die or a spinner) dictated the game’s outcome.

In 1930, however, Clifford Van Beek designed an at-home baseball game called National Pastime that was produced by Major Games Company. This creation was one of the first to attempt to accurately simulate the performance of actual major league players. 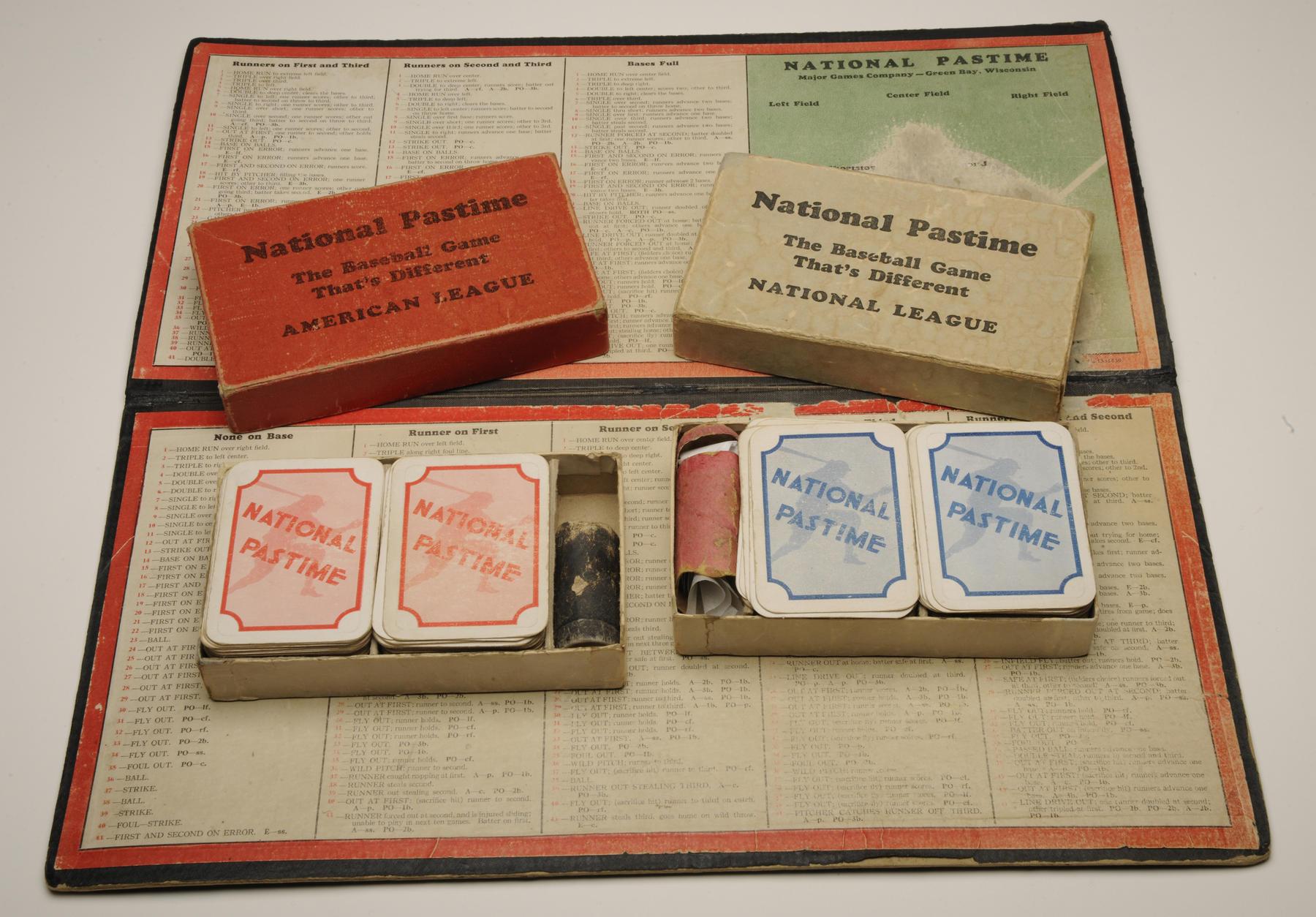 In doing so, Van Beek laid the foundation for millions of future gamers who would move from choosing players (ala 1951’s APBA Baseball or 1961’s Strat-o-Matic) to what is seen today with electronic simulations (IBM’s John Burgeson first coded an IBM 1620 computer in 1960), video games (think Atari 2600’s Homerun from 1978 or Nintendo’s Major League Baseball from 1988), mock fantasy drafts (Rotisserie Baseball’s first draft in 1980), on-line updating, daily analytics and widespread media coverage of which pro players are performing well for use in upcoming fantasy games.

The history of fantasy baseball is chronicled in a case in the Museum's Whole New Ballgame exhibit. The case includes a Parlor Base Ball game set, a Strat-O-Matic Baseball game set and a Rotisserie League Baseball trophy, among other related artifacts.

Today, fantasy gaming is a massive sport industry unto itself drawing the attention of legalized gambling concerns as well as professional leagues and players whose names, likenesses and performances are critical to the billions of dollars generated.

But credit the long-forgotten Recreation Club of Brooklyn for getting this whole fantasy universe started. And Mrs. B., whoever she was, might warrant recognition as the first-ever fantasy manager.

Rick Burton is the David B. Falk Professor of Sport Management at Syracuse University and a frequent presenter at the annual Cooperstown Symposium. Author’s Note: This column was inspired by research conducted and provided by National Baseball Hall of Fame and Museum senior curator Tom Shieber.