Not many ballplayers have found success on the playing field as well as in the manager’s office. But Red Schoendienst could do it all.

Hall of Famer Albert Fred “Red” Schoendienst, died Wednesday at the age of 95. He was the oldest living Hall of Famer.

Schoendienst spent the majority of his baseball career in the city of St. Louis and was elected to the Baseball Hall of Fame in 1989.

“Red Schoendienst’s love of the Hall of Fame was matched only by his commitment to the Cardinals, and his passion for the game itself,” said Hall of Fame Chairman of the Board Jane Forbes Clark. “He returned to Cooperstown for Hall of Fame Weekend for decades after his election, his wonderful smile and laugh brightening the Museum on each visit. He will be forever missed by his Hall of Fame family.”

Born Feb. 2, 1923 in Germantown, Ill., Albert Fred Schoendienst grew up learning the game on amateur teams but never saw a big league game until he debuted in the majors in 1945. At 16, he joined the Civilian Conservation Corps – where he nearly saw his baseball dreams ended after suffering an injury to his left eye while building fences.

His vision recovered enough, however, to earn a tryout with the Cardinals in 1942 after the CCC had disbanded in the wake of the start of World War II. In 1943, Schoendienst was named MVP of the International League and then spent the next year in the Army after being drafted. He was discharged in 1945 due to his eye problems and a shoulder injury. But despite his injuries, he made the Cardinals club that spring and was their starting left fielder.

In his rookie season, he led the NL in stolen bases with 26. The following season, he moved to second base and led the NL in fielding percentage, which he would do five more times. In 1950, he handled 320 consecutive chances without an error and in 1956 he set an N.L. record with a .9934 fielding percentage at second base, which would not be broken until 1996 by Ryne Sandberg.

Hall of Famer and roommate Stan Musial said Schoendienst had “the greatest pair of hands I’ve ever seen.”

The switch-hitter played 11-plus seasons in St. Louis, winning a World Series in 1946. In 1956, he was traded to the New York Giants and then a year later to the Milwaukee Braves, where he would make an immediate impact. 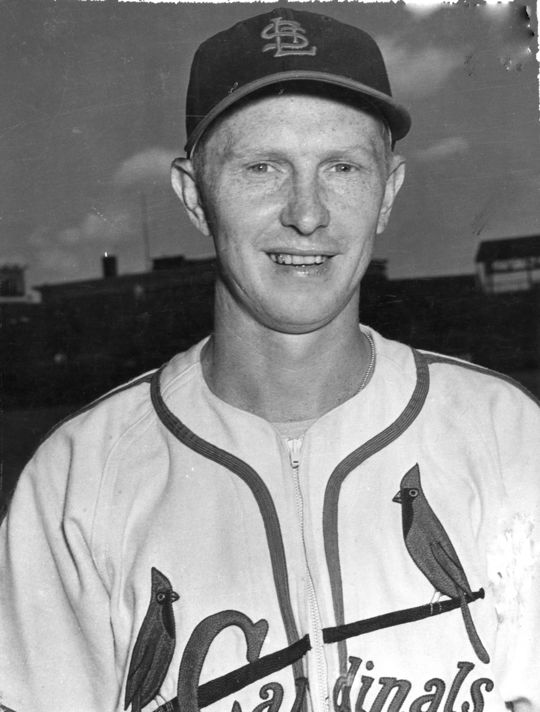 Red Schoendienst played for the St. Louis Cardinals from 1945-56 and again from 1961-63. (National Baseball Hall of Fame and Museum) 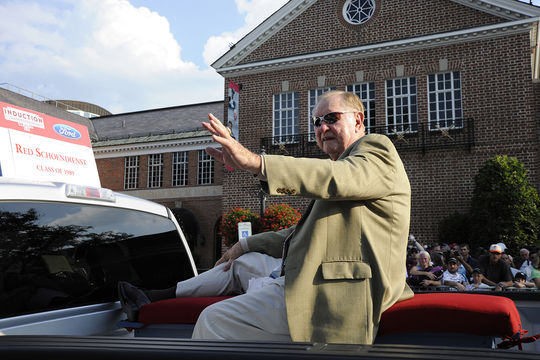 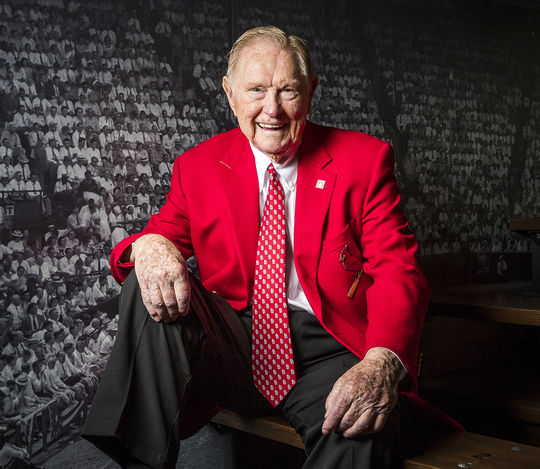 Red Schoendienst went from coach to manager of the St. Louis Cardinals in 1965 and went on to hold the longest managerial tenure in club history until Tony LaRussa. (Jean Fruth/National Baseball Hall of Fame and Museum) 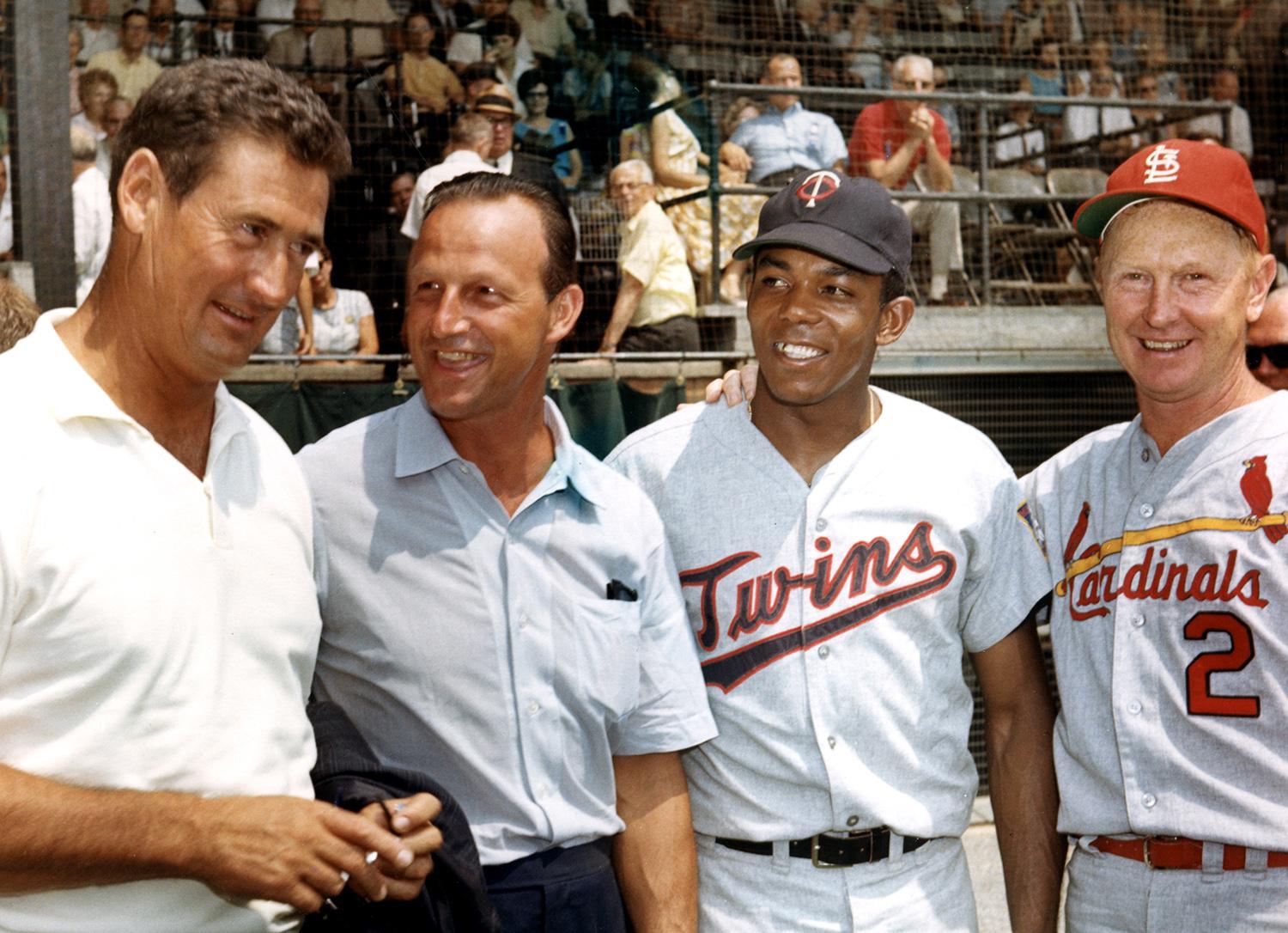 Schoendienst led the league with 200 hits in 1957 and helped the team to consecutive pennant wins in 1957-58. He won his second World Series in 1957, the first and only championship the Braves would win in Milwaukee.

He sufferered multiple injuries in 1958 and missed almost the entire 1959 season fighting tuberculosis, which cost him part of a lung. He signed as a free agent with the Cardinals in 1961, where he finished out his career. 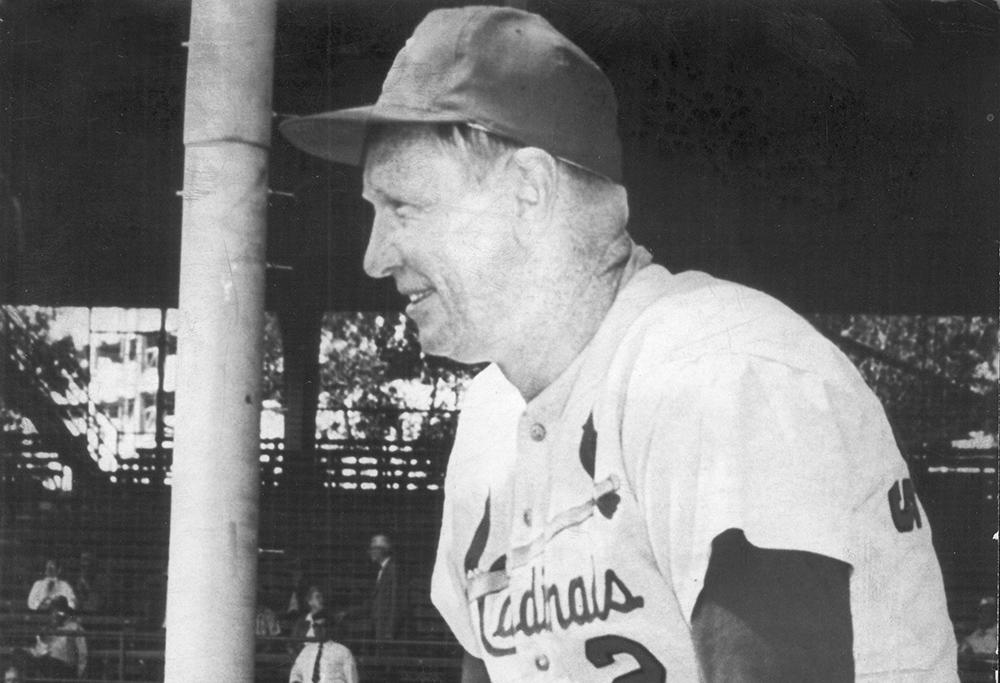 “Red was an amazing worker,” said Bruce Sutter, who played for the Cardinals when Schoendienst was a coach in the 1980s. “He loved baseball. He loved to be out there just hitting fungoes. He was a special person.

“Young players today, they need some of the things passed down that we went through. Red was the voice of that generation.”

Schoendienst went from coach to manager of the Cardinals in 1965 and went on to hold the longest managerial tenure in club history until Tony LaRussa.

“Red is quite a human being. He treats us like men, lets us play our game and gives our young players confidence,” said Hall of Fame Orlando Cepeda in 1967, when Schoendienst led the Cardinals to the World Series title.

As manager, Schoendienst led the team to pennants in 1967 and 1968, won the 1967 World Series and had a .522 winning percentage in 12 seasons. He wore a major league uniform as a player, coach, or manager for seven decades.

"Gentleman Red Schoendienst was a star second baseman and ambassador, devoting his life to the game he loved,” said Hall of Fame President Jeff Idelson. “The 10-time All-Star and three-time World Series-winner will be remembered for clutch hitting, impenetrable defense and for spending more than 70 years in baseball, including 19 as a player and 14 as Cardinals manager. He was especially beloved in St. Louis, where ‘This Old Redbird,’ as he called himself, wore a Cardinals uniform longer than anyone else in the franchise’s history. In 1942, with only a quarter in his pocket, Red hitched a ride on a milk truck from his hometown in Illinois to St. Louis for a try-out with the Cardinals. Forty-seven years later, he was elected to the Hall of Fame. Rest in Peace, Redbird."