Join us as we celebrate the national pastime on none other than America's birthday! Honor the country's 243rd birthday and the stars and stripes by waving flags from our Ticket Booth and around the Museum! We will also be remembering Lou Gehrig and his contributions to the game in honor of the 80th anniversary of his Farewell Speech, which occurred on July 4, 1939. The following events are free with museum admission!

All Day: ALS and Baseball
Show your support by signing a card for an ALS patient or an ALS family support group in the museum lobby! Small ribbons will also be given so you can spread awareness for ALS! Museum staff will also tell you where you can learn more about ALS in the Whole New Ballgame Exhibit!

10:30 am: Plaques of the Gallery Tour
Aimed at visitors of all ages, this guided tour will educate visitors about the history of the Hall of Fame Gallery and the process by which each plaque is made. Special attention will be paid to Lou Gehrig and his accomplishments as we remember the 80th anniversary of his Farewell Speech.

11:30 am: Artifact Spotlight—Lou Gehrig
Hall of Fame staff share the stories of unseen items from our collection of over 40,000 artifacts that are not currently on display. This presentation will highlight artifacts from Lou Gehrig’s career as well as include a special screening of his Farewell Speech that occurred 80 years ago today!

1:30 pm: Guided Tour—Lou Gehrig
Join our staff as we honor the 80th Anniversary of Lou Gehrig’s Farewell Speech in a guided tour throughout the museum.

3:00 pm: So You Think You Know Baseball?
Test your knowledge of Lou Gehrig and baseball history in this interactive game show for fans of all ages! Make your way through all nine innings, and you could win a free commemorative Hall of Fame gift. Put your wits to the test and see if you’ve got what it takes to walk away a winner!

5:00 pm: The Pride of the Yankees (Bullpen Theater, 1st Floor)
Join us for a special screening and tribute to the legendary New York Yankees first baseman Lou Gehrig, who died only one year before its release, at age 37, from amyotrophic lateral sclerosis (ALS), which later became known as “Lou Gehrig’s disease” 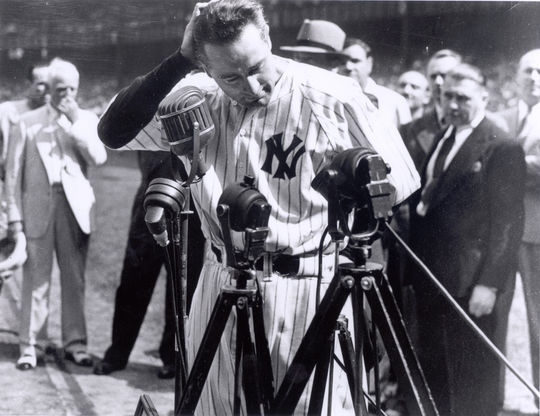 New York Yankees first baseman Lou Gehrig announces his retirement during his famous "Luckiest Man" speech on July 4, 1939 at Yankee Stadium. Gehrig passed away nearly two years later from amyotrophic lateral sclerosis. He was voted to the Hall of Fame by special election in 1939. (National Baseball Hall of Fame and Museum) 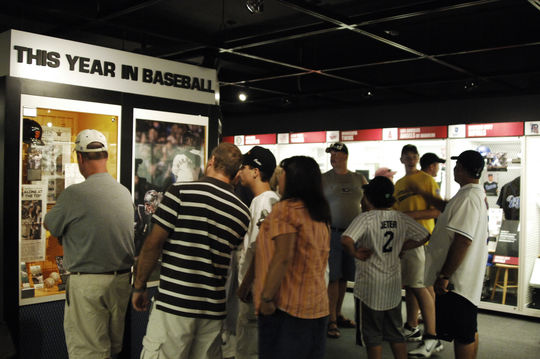