If the Glove Fits, Protect It

They are the baseball player's best friend, from youth leagues and the sandlots to the big leagues. Of all the equipment used by ballplayers, gloves are often the ones most treasured – often earning a special place on the nightstand or under the pillow when not in use.

The National Baseball Hall of Fame and Museum's permanent collection contains more than 500 gloves – and promises to care for each one in perpetuity. With the right knowledge and treatment, leather can last almost forever.

The first two gloves donated to the Museum came from two very impressive sources: Christopher (Christy) Mathewson and Denton T. (Cy) Young. The gloves arrived at the Museum just one day apart in 1937 and served as the foundation for the many historic gloves to enter the building. The permanent collection currently contains mitts that range in age from the late 19th century to the present day.

By 1885, some catchers were using full-fingered gloves, with infielders following suit. Cincinnati second baseman and Hall of Famer Bid McPhee was one of the last Major League Baseball infielder’s to play bare-handed, not utilizing a glove until the mid-1890s. 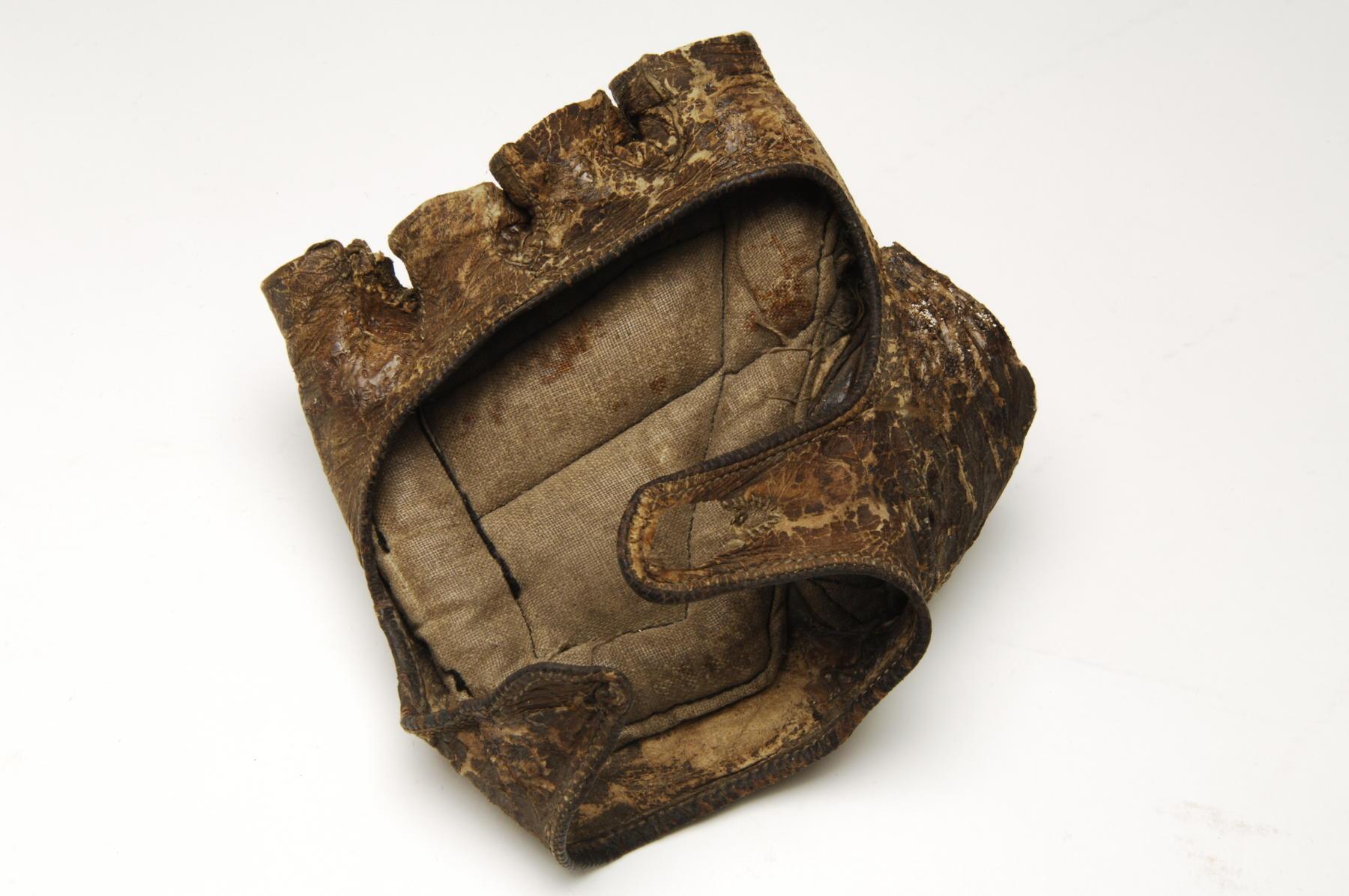 With the stigma removed, glove development accelerated. Extra padding was added along with shallow webbing between the fingers. Glove usage was now an accepted part of the game and in 1895, the National League and the American Association created the first restrictions on glove size.

After padding, the next innovation was presented by St. Louis Cardinals pitcher Bill Doak in 1920. Doak’s design replaced the leather webbing with a series of straps between the first finger and thumb, creating a superior pocket that would better absorb the balls impact on the palm and fingers. Doak’s idea was patented on August 22, 1922 and went into full production at the Rawlings Sporting Goods Company.

Glove design continued to change from the 1930s when a more modern web was introduced with one or two straps and no lacing between the fingers. From the late 1940s on, laces connected the fingers. A 12-inch size rule was instituted for outfielder gloves in the 1950s. The popular A2000 model was introduced by Wilson in 1957 and the true modern era was born. Today’s gloves can measure as long as 13 to 14 inches.

However, leather gloves will be around for a while – and we'll preserve ours for generations to come at the Museum. The care of leather is extremely important as the natural skin is an organic compound and vulnerable to deterioration over time. And if you have gloves at home you're caring for, it is essential to store your glove in a consistent temperature and humidity so the leather will not become too dry or too moist.

The Hall’s glove collection is stored in acid-free boxes in a climate-controlled area regulated at 65 degrees and 45 percent relative humidity. No additives are ever placed on the leather surface as the pores would clog and push the substance back to the surface. This white residue that appears on the glove surface is called "spew" and it looks similar to mold growth. If you see this fine white residue on a glove surface, wipe the leather with a soft cloth. This residue will continue to push to the surface so continue to wipe the leather until the process ceases. Adding oils or other substances to leather will attract dust and dirt and cause the spew effect. All leather products needs to breathe so gloves should not be stored in air tight containers or bags. 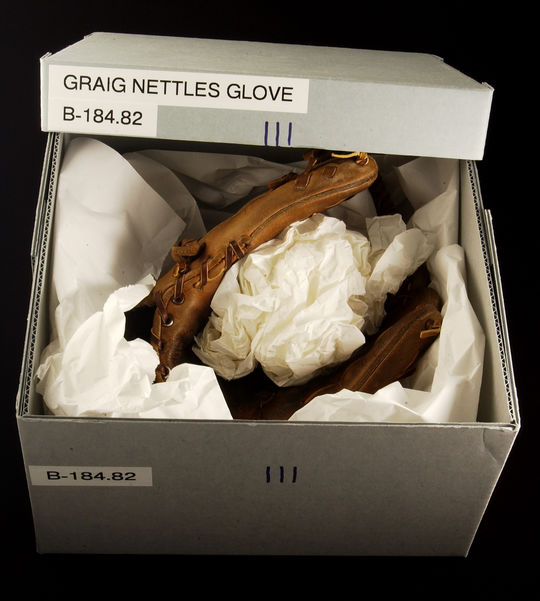 The glove of Graig Nettles stored in an acid-free box and acid-free tissue paper. B-184.82 (Milo Stewart, Jr. / National Baseball Hall of Fame)

Conservation labs specialize in the care of historical materials and often perform treatment on leather items. Treatments performed can include cleaning, corrosion removal, structural repair, replacement of missing elements and storage recommendations. Surface cleaning is critical as any leather dressings or oils used add to the corrosion of metal components, such as buckles or grommets. This corrosion, often seen as green deposits around the grommets, needs to be removed as it is evidence that the deterioration process has begun.

Labs provide estimates for potential work and supply before and after pictures to document treatments. Treatment time for most gloves range from six to 22 hours with an average of 13 hours per glove. Conservators are educated and trained in specific disciplines and are a wealth of information. Their mission is to preserve the past and they are passionate about their work. A search on the internet can provide listings for regional labs and associated contact information.

Gloves are a wonderful window into the history of baseball and the evolution of equipment. If you own a glove and wish to preserve it, make sure you contact the professionals and heed their advice. They are the true heroes that preserve the past for future generations to enjoy. 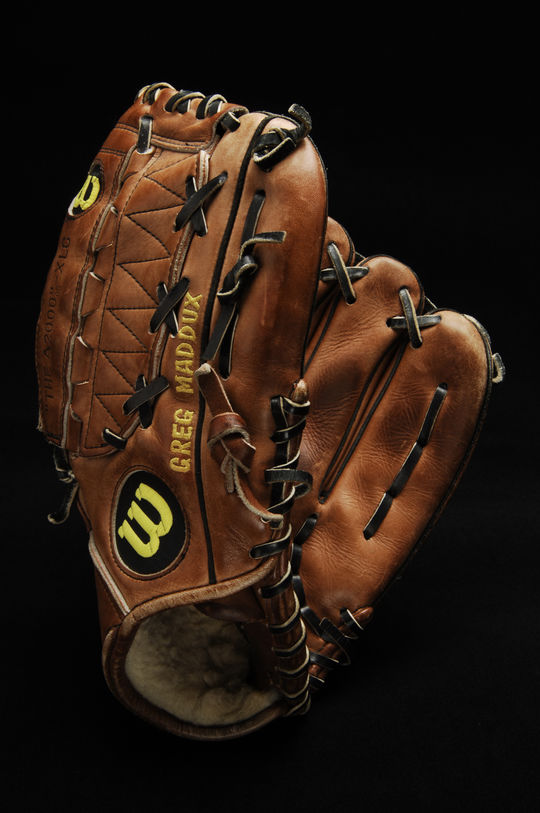