Dates for future Hall of Fame Induction Ceremonies include:

Provided that they remain retired, the following are partial lists of former Major League ballplayers who will become eligible for consideration by the BBWAA for election into the Hall of Fame in upcoming years.

Players who are eligible have played 10 seasons of Major League Baseball and have been retired from for five full seasons. 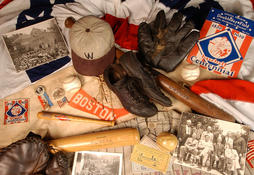 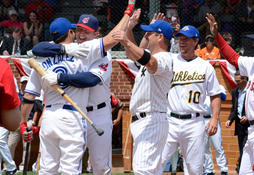 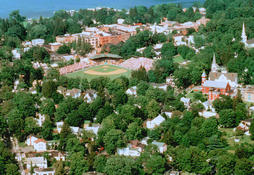 Make plans today for a trip to America's Most Perfect Village.

He was named to his first All-Star Game in his final season in 2015, capping a career where he twice led his league in strikeouts per nine innings and finished with 2,513 Ks total...Posted 164-157 career record with 3.99 ERA, helping the Yankees win the 2009 World Series title...Pitched 17 seasons for Marlins, Blue Jays, Yankees, Pirates and Phillies.

Four-time All-Star pitched 17 seasons with the Athletics, Braves and Giants…Finished in Top 5 of Cy Young Award vote three times, including a second-place finish in 2000 when he won 20 games…Finished with career record of 222-133, good for a winning percentage of .625 – one of only 16 pitchers in history to reach that combination…Member of 2014 World Champion Giants.

Six-time All-Star first baseman played 12 seasons for Brewers, Tigers and Rangers…Became youngest player to hit 50 homers in one season in 2007 at the age of 23…Finished in Top 4 of NL MVP voting three times (2007, 2009, 2011) and won three Silver Slugger Awards before a back injury forced his retirement at the age of 32…Drove in 100-or-more runs six times…Named 2011 All-Star Game MVP and the 2015 AL Comeback Player of the Year…Appeared in 157-or-more games in nine seasons, including a league-best 162 games four times.

The 2005 National League Rookie of the Year and 2006 NL MVP played 13 seasons, all with the Phillies…Three-time All-Star first baseman who finished in the top 10 of the NL MVP voting six times, including four times in the top 5…Led league in home runs twice and RBI three times, becoming one of only 12 players in history with at least three 140-RBI seasons…Finished career with 382 home runs, 1,194 RBI and a .515 slugging percentage…Won 2009 NLCS MVP Award and helped Phillies win 2008 World Series title.

Six-time All-Star who pitched 16 seasons for Giants, Twins, Rangers, Tigers and Cubs…Finished in top 5 of his league’s Cy Young Award voting twice…Topped 30-save mark in nine seasons, including four seasons with 40-or-more…Posted ERAs of less than 2.00 in five full seasons…Won 2009 American League Rolaids Relief Award…Totaled 64-34 record with 377 saves and a 2.87 ERA…Retired in eighth place on all-time saves list.

Six-time All-Star who pitched 12 seasons for Red Sox, Phillies and Nationals…Saved 30-or-more games in 10 seasons, striking out at least 10.0 batters per nine innings in six seasons…Closer for 2007 Red Sox team that won the World Series title…In seven postseason series, posted 2-1 record with seven saves and 1.00 ERA in 18 games, allowing no earned runs in 10 games in the ALCS and World Series combined…Finished career with record of 41-36 with 368 saves and 2.44 ERA…Save total ranked ninth all-time at the time of his retirement.

Two-time All-Star played 19 seasons with Twins, Giants, White Sox, Rangers, Red Sox, Cardinals and Braves…One of only nine players in history who spent at least 50 percent of his games as a catcher who totaled at least 2,000 hits…Hit .292 with five homers and 18 RBI in 32 postseason games, helping White Sox to win 2005 World Series title…Finished with .280 career batting average, 188 home runs and 2,043 hits.

Nine-time All-Star and 1999 American League Rookie of the Year played 20 big league seasons for the Royals, Astros, Mets, Giants, Cardinals, Yankees and Rangers…Three-time Gold Glove Award winner in center field and a two-time Silver Slugger Award winner…Drove in 100-or-more runs in eight seasons and topped the 20-home run mark 12 times…Career stolen base success rate of 86.4 percent is higest of any player in history with at least 300 steals…Had two postseason series in 2004 (NLDS and NLCS) with four home runs and hit .307 with 16 home runs in 65 career postseason games…Member of 2017 Astros World Series title team.

Played 12 seasons, all with the Dodgers...Two-time All-Star outfielder and 2011 Gold Glove Award winner...Won a Silver Slugger Award in 2009...Reached the 20-homer mark in four seasons...Appeared in 14 Postseason series over eight years with the Dodgers, and was member of Dodgers 2017 National League championship team.

The 2005 American League Rookie of the Year pitched 13 seasons for Athletics, Rockies, Padres and Angels...Two-time All-Star reached 30-save mark in five seasons...Finished career with 324 saves, 42 wins and 2.95 ERA over 668 appearances.

Played 15 seasons for the Blue Jays, Dodgers, Phillies and Nationals, earning All-Star Game berth in 2009…Reached 20-homer mark in six seasons and led National League with 46 doubles in 2010…Had two seasons with 20 homers and 20 steals…Hit .444 to power Phillies past Tampa Bay in 2008 World Series.

Four-time All-Star and five-time Gold Glove Award third baseman played 21 seasons for Dodgers, Mariners, Red Sox and Rangers...Totaled 636 doubles, 477 home runs and 1,707 RBI...Among players who appeared in at least 50 percent of their games at third base, is only player in big league history with at least 3,000 hits and 450 home runs...Played 2,759 games at third base, second on the all-time list.

Five-time All-Star played 16 seasons as a catcher and designated hitter with Indians, Red Sox and Tigers...Two-time Silver Slugger Award winner, once at catcher and once at DH...Reached the 100-RBI mark five times and the 20-home run mark seven times, hitting better than .300 in eight full seasons...Finished career with 2,153 hits, 246 home runs and a .295 batting average.

Six-time All-Star, five-time Silver Slugger Award winner at catcher and three-time Gold Glove Award winner played all 15 of his big league seasons with the Twins...Won American League batting title in 2006, 2008 and 2009, becoming the only catcher to win three batting titles...Named 2009 AL Most Valuable Player and finished in Top 10 of AL MVP voting in three other seasons...Topped the .400 mark in on-base percentage of six of his seasons as a catcher, a total exceeded by only four other catchers, none of whom started their careers after 1930...Spent last five of his 15 years in the big leagues primarily at first base.

Six-time All-Star and four-time Silver Slugger Award winner at second base played 16 seasons for Phillies and Dodgers...Topped the 100-RBI mark four times and reached the 30-home run mark three times...Teams qualified for postseason in eight of his 16 seasons, including five straight with the Phillies from 2007-11...Helped lead Phillies to 2008 World Series title and hit a record-tying five home runs in 2009 World Series.

Seven-time All-Star and two-time Gold Glove Award winner at third base played each of his 14 big league seasons for the Mets...Drove in 100-or-more runs five times, topped the .300 mark in batting average in seven seasons and hit 20-plus home runs six times...Finished in Top 10 of NL MVP voting four times...Finished career with 242 home runs, 196 stolen bases and .296 batting average.

Pitched 11 seasons for Athletics, Diamondbacks, Red Sox and Marlins...In 739 appearances - all as a reliever - won 37 games and saved 105 more while posting a 2.75 earned-run average...In 2008, set record by pitching 39.1 scoreless innings to start career.

Most Valuable Player of the 2011 NLCS and World Series with Cardinals whose dramatic two-run, two-out triple in the bottom of the ninth of Game 6 of the Fall Classic pushed the game to extra innings, where he then won the game in the 12th inning with a walk-off home run...Played 11 seasons with Cardinals, Angels, Pirates and Dodgers, earning a 2012 All-Star Game berth...Primarily a third baseman, Freese hit .299 in 14 Postseason series over six seasons with 10 home runs and 36 RBI in 69 games.

Seven-time All-Star and six-time Silver Slugger Award winner played 15 seasons for Braves, Yankees and Astros…Reached the 20-home run mark in 10 seasons and finished with 282 homers, eighth-best all-time among players whose primary position was catcher…His 10 seasons with 20-or-more homers are tied with Yogi Berra for the second-most of any catcher, behind Johnny Bench and Mike Piazza with 11 apiece...Retired as one of only 12 catchers in history with at least 1,000 RBI…Appeared in 11 Postseason series in eight seasons, helping Astros win 2017 World Series title…Led league among catchers in putouts twice and fielding percentage twice.

Topped the .300 mark in batting average in four full seasons during 14-year career with Braves, Diamondbacks, Yankees and Marlins...2010 All-Star at second base who reached 30-double mark in five seasons, including two campaigns with 40-plus doubles...Led all NL third basemen in fielding percentage in 2015.

Ten-time All-Star and 2001 American League Rookie of the Year and Most Valuable Player, played 19 seasons with Mariners, Yankees and Marlins…Tied MLB record with 200-plus hits in 10 straight seasons from 2001-10, setting single-season record with 262 hits in 2004…Led AL in hits seven times, batting average twice and stolen bases once…Ten-time Gold Glove Award winner in right field…Amassed 3,089 big league hits, along with another 1,278 hits in nine seasons playing for Orix in the Japanese Pacific League…Scored 1,420 runs in MLB and added 509 stolen bases to go with .311 career batting average. 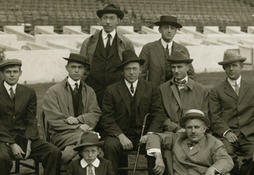 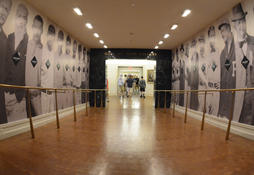 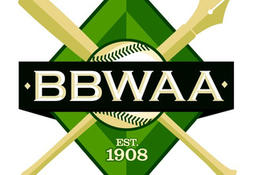 Make plans today for a trip to America's Most Perfect Village.