Giving the House a Home

Founded in 1903 as a religious community, the Israelite House of David was established for the purpose of reuniting the 12 lost tribes of Israel to await the Millennium.

But for many baseball historians and fans, the name House of David has become synonymous with baseball’s barnstorming heyday. And today, thanks to a donation to the National Baseball Hall of Fame and Museum, the House of David legacy is alive and well in Cooperstown.

Headquartered out of the small town of Benton Harbor, Mich., the House of David ran a number of successful business operations and also sponsored a variety of athletic programs. House of David founder Benjamin Purnell was an active sports enthusiast and encouraged his members to participate and, reflecting the nation as a whole, baseball was their preferred pastime.

The House of David began playing organized baseball by 1913 as a weekend activity drawing impressive crowds at their home field in Benton Harbor, and by 1920 they were a regular feature on the American barnstorming circuit. The baseball team served several functions, the two primary purposes being to raise money for the community, but also as a means of recruiting new members to the faith. The basic tenets of the House of David included physical labor, celibacy, refraining from haircuts and shaving, and a strict vegetarian diet. The athletic teams were seen as a way to develop both the physical and spiritual discipline required by the religion.

In addition to their primary men’s barnstorming team, the colony also sponsored a girl’s squad and a junior boys program.

Donning a variety of House of David uniforms, and playing with flowing locks of hair and unshaven faces, the team stood out among the many barnstorming operations and their reputation as an excellent baseball team was known throughout North America. Their unique physical appearance and a famed sleight-of-hand “pepper game” also helped to ensure large crowds wherever they traveled.

By the late 1920s the House of David began hiring professional players to further enhance their program, and included such luminaries as Grover Cleveland Alexander, Chief Bender and Satchel Paige. While not required to convert to the full faith, these contract players were asked to grow facial hair, or to at least where a false beard.

There may have been one exemption to the no shaving rule, as the team signed 19-year-old Virne Beatrice Mitchell to a contract in 1933. Known as Jackie, and having earned some fame for striking out Babe Ruth and Lou Gehrig in an earlier exhibition contest, Mitchell became one of the first women (if not the first) to sign a professional baseball contract. Her salary was set at $3,000 per month, a significant sum in those days. This pay scale also serves to indicate the financial value the team held for the colony.

The quality of play was excellent, and the House of David’s schedule included major league, minor league and Negro Leagues games. The program would expand to include as many as three different teams. However, by the early-1930s, legal troubles and internal religious differences began to take their toll, and the colony split into several factions, each of whom continued to sponsor baseball teams. Although mainly consisting of contract players not associated with the religious colonies, the House of David teams would continue to barnstorm throughout North America until the mid-1950s. Then, like so many other baseball programs, they faded from national memory. 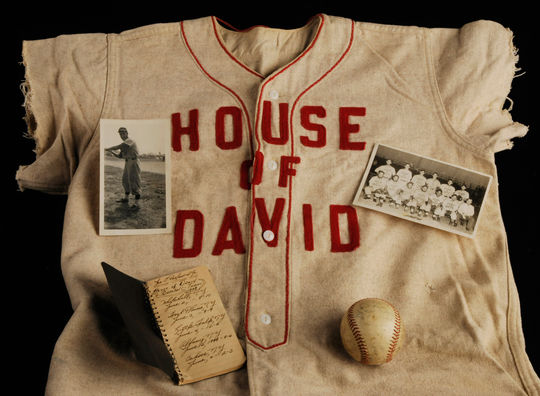 Artifacts collected by the Hall of Fame pertaining to the House of David barnstorming team. (Milo Stewart, Jr. / National Baseball Hall of Fame) 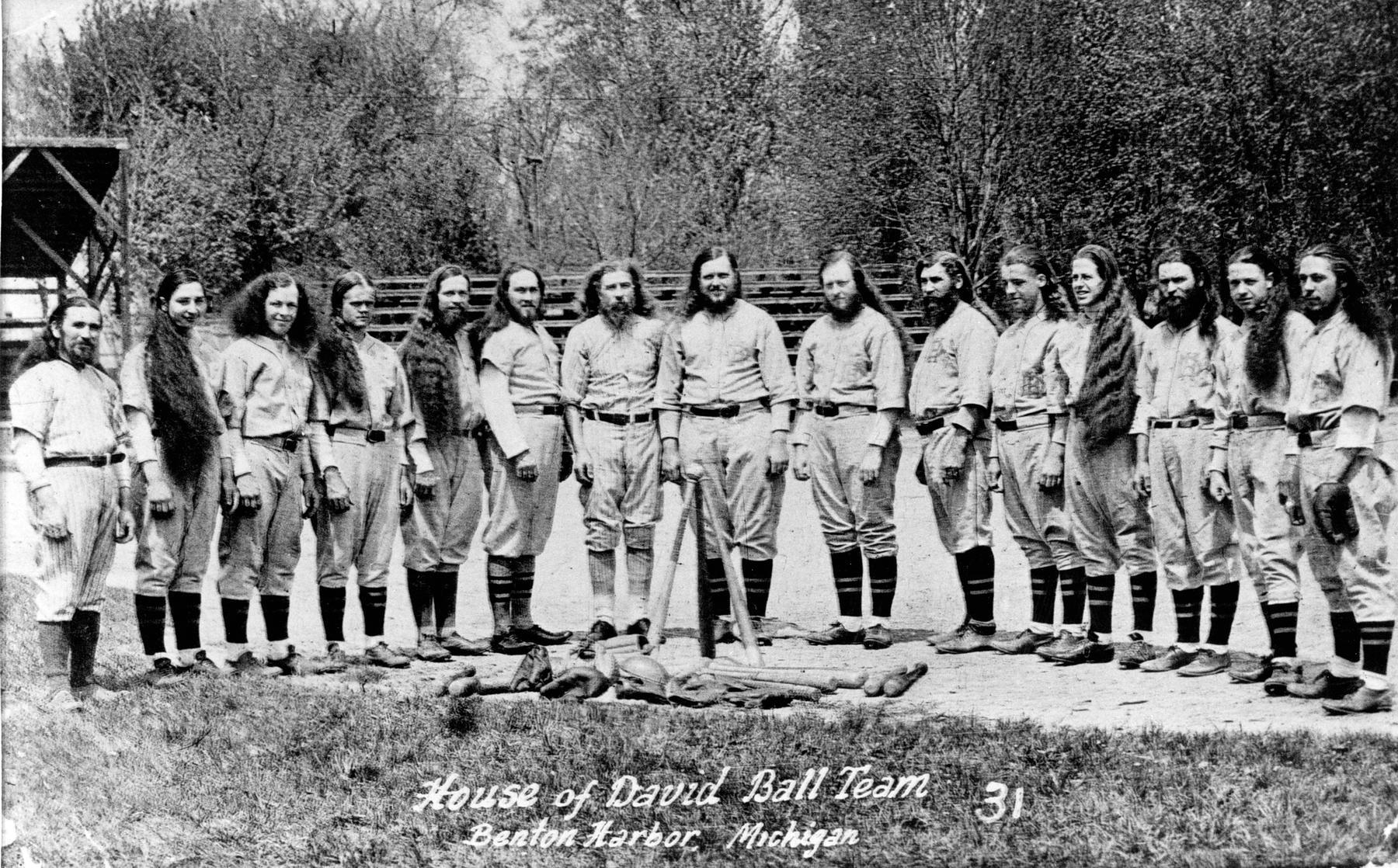 To a certain degree, this loss is also represented within the collections of the Hall of Fame. While the Library contains a nice file of articles, a selection of photographs, and a copy of several books about the House of David, the Museum once had very little in the way of artifacts from this famous team.

The Palladino family from the Philadelphia area changed this, when they decided to make a family visit to Cooperstown. Having called the Library in advance, the staff was able to provide them with access to the archival collection on the House of David. On the day of their tour, three generations arrived for their visit, including Joe Palladino Jr., his son Joe III, and two grandsons, Joe IV and Michael Aquilino. They dropped by the Library that morning and began a nice discussion about the history of the House of David team. It was at that point that Joe Jr. revealed that had played with the team during the 1948 season, touring through upstate New York and several provinces of Canada.

The real surprise came when Joe Jr. held up a small shopping bag and asked, “Would you like to see my uniform?”

The House of David is a tremendous part of America’s 20th Century baseball story, and the family generously agreed to donate the uniform. To add some icing to this cake, Joe Jr. also included a signed baseball from his year with the team, along with several team and individual photos, and a small journal where he kept track of the game results.

Joe Palladino Jr. grew up in Philadelphia, playing high school ball, and eventually participating in the South Philadelphia League, a local semi-pro operation. In 1948, at the age of 17, his local coach recruited him to join a traveling House of David team, which operated as a franchise and was run by a businessman named Sam Besinoff. Three South Philly players signed up to play and they immediately departed for Albany, N.Y., where they would join the team, already engaged in the barnstorming schedule. It was in Albany that Joe Jr. received the uniform which is now part of the Hall of Fame collection.

The team traveled in a bus emblazoned with the House of David name, and played all summer, driving through upstate New York and then heading north, crossing the border at Niagara Falls, to play through several Canadian provinces. The team was constantly on the move, playing as many games as possible. It was not unusual for them to play three games in one day. In addition to having their travel and hotel expenses covered, they were paid a percentage of the gate, usually picking up $35 to $45 dollars per game, and they also received $2 per day as meal money. If a game was rained out, they received no pay.

The team also played night games on a routine basis. The team bus was usually followed by a truck towing a portable lighting system. Harry Huff of Pottsville, Pa., had developed this portable system and worked with the House of David to set up the lights, thereby allowing the team to get in an extra game on many occasions.

Spending so much time on the road would be a chance to experience North America, but Joe Jr. reports that he saw “ball fields, hotel rooms, and the inside of the team bus.” There was very little time to be a tourist. Still, he felt it was a great way for a young man to spend a summer, getting paid to play baseball. It was an exciting time for the young ball player from Philadelphia, but Joe Jr. had only one regret: “I didn’t get to see Canada.”

Thanks to his generous donation, however, Joe Jr.’s legacy – along with that of the House of David barnstorming team – will be seen by countless visitors to the Baseball Hall of Fame. 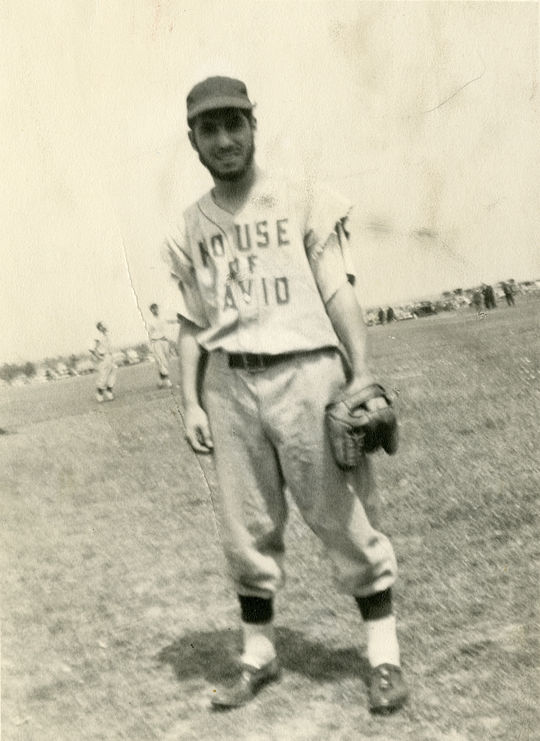 Portrait of Joe Palladino, Jr., player for the House of David baseball team, 1948. His donated uniform is part of the Hall of Fame's collection. BL-123.2010.2