(COOPERSTOWN, NY) – The Washington Nationals are kings of the National Pastime.

The National Baseball Hall of Fame and Museum will celebrate the Nationals’ 2019 World Series championship through Autumn Glory, the Museum’s tribute to the postseason in Cooperstown. The display honoring the 2019 champions is now open, and entrance to Autumn Glory is included with Museum admission.

Following Washington’s World Series-clinching win on Oct. 30, the Museum acquired several artifacts from the Nationals, who notched the franchise’s first Fall Classic crown with their victory over the Houston Astros in the 115th World Series. Artifacts donated by the Nationals and featured in the exhibit celebrating the 2019 postseason include: 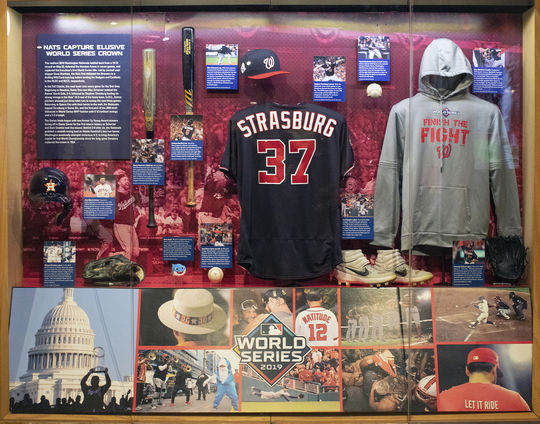 The Hall of Fame's exhibit honoring the 2019 World Champion Washington Nationals will be on display through the end of the 2020 MLB Postseason. (Milo Stewart Jr./National Baseball Hall of Fame and Museum)

Additional artifacts from the 2019 postseason that will be part of Autumn Glory include:

- The batting helmet worn by ALCS MVP José Altuve throughout the postseason, including when he hit his series-ending, walk-off home run in Game 6 of the ALCS
- The bat used by Howie Kendrick to hit his grand slam in Game 5 of the NLDS
- The glove used by the Astros’ Michael Brantley throughout the 2019 season

The 2019 World Series exhibit in Autumn Glory will be on display through the conclusion of the 2020 Major League Baseball postseason.

In 2020, the Museum will continue its salute to the Nationals World Championship of 2019 with special programming to be announced in the spring.

The Museum collections contain many artifacts documenting the entire history of World Series and postseason play, including Don Larsen’s cap and Yogi Berra’s mitt from Larsen’s 1956 perfect game; Joe Carter’s bat from his Series-ending blast in 1993; the jersey David Freese wore when he hit his game-winning home run in Game 6 in 2011; and World Series rings from the last century of Fall Classic competition.