Kelsey Grammer saw the Wade Boggs-model bat from the Hall of Fame collection and instantly made a personal connection.

“Wade Boggs… he did a Cheers episode.”

Of course, when you played Dr. Frasier Crane on Cheers and the eponymous Frasier series for 20 years, connections are not uncommon. But Grammer was clearly amazed at the amount of history preserved by the Museum when he visited Cooperstown on Tuesday.

“All those names knocking around… you hear them again and it brings you right back,” said the 60-year-old Grammer, who visited the Museum with his family. “Baseball is pretty cool.” 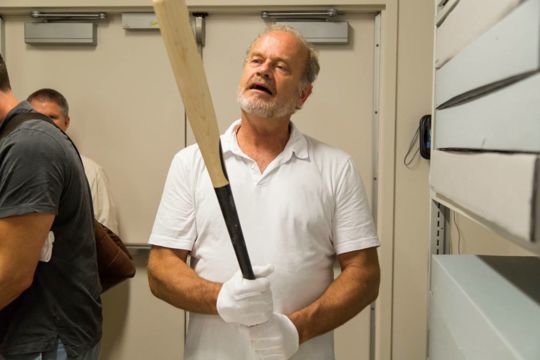 Actor Kelsey Grammer, multiple Emmy Award-winner for his roles on Cheers and Frasier, holds a bat from the Hall of Fame collection during his visit to the Museum on July 21, 2015. (Parker Fish / National Baseball Hall of Fame)

Wade Boggs...he did a Cheers episode.

The Wade Boggs episode came in Season 6 of Cheers, which was filled with baseball references thanks to the fictional Red Sox playing career of Cheers' Sam Malone. Grammer joined the Cheers cast in Season 3, and was nominated for multiple Emmy Awards for his portrayal of Frasier Crane. He later won four Emmy Awards for Outstanding Lead Actor in a Comedy Series on Frasier.

Dressed in a white polo shirt and black jeans, Grammer smiled often and inquired about the history of artifacts as he was given a tour by Erik Strohl, the Museum’s vice president of exhibitions and collections. Reading from a book of rules in the Museum Library dated from 1859, Grammer’s rich baritone reverberated off the walls and seemingly melted away time.

Later, Grammer held a promissory note for a $25,000 payment to Red Sox owner Harry Frazee in exchange for Babe Ruth when Ruth was sold to the Yankees. 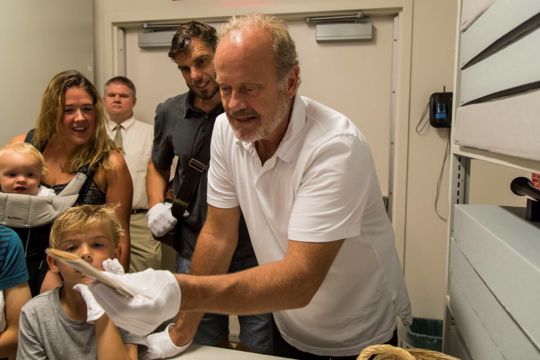 “He wanted to finance a theater, right?” Grammer asked Strohl, adding the legendary story about how Frazee used the money he gained from Ruth’s sale to finance the musical “No, No, Nanette.”

It was another reference from his career, as Grammer and his Frasier co-star David Hyde Pierce discussed the musical in the Season 4 episode “A Crane’s Critique.”

Grammer then held bats used by modern day stars Mike Trout and Derek Jeter, marveling at the athletic skill and the majesty of the game.

“This is something you’ll remember,” Grammer said to his infant son Gabriel as Gabriel touched a Ruth bat through a cotton glove. “I’ll remember, too.” 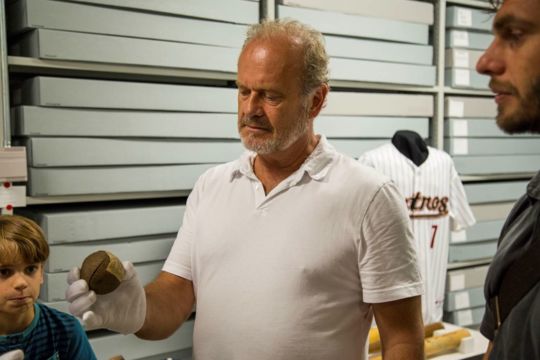