(COOPERSTOWN, NY) – Morris Berg spent 15 seasons in the big leagues, mostly as a backup catcher with teams struggling to stay out of the American League basement.

But Berg’s story remains one of baseball’s most unusual and mysterious tales – and lives on today through books, movies and a new exhibit at the National Baseball Hall of Fame and Museum.

Moe Berg: Big League Spy recently debuted as part of the Museum’s second-floor timeline, paying tribute to a man who – in addition to 663 big league games – compiled a resume that intrigues historians to this day.

Berg’s life is the focus of the 2018 movie “The Catcher Was a Spy,” distributed by IFC Films, which is based on the Nicholas Dawidoff book by the same name. 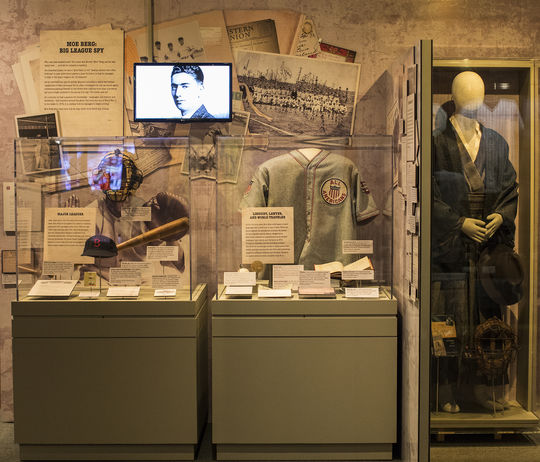 The Museum's new exhibit on Moe Berg's career is located on the second-floor timeline. (Milo Stewart Jr./National Baseball Hall of Fame and Museum)

“The movie prompted us to re-examine our Moe Berg collection, which is quite extensive thanks to donations from his sister Ethel and brother Sam in the 1970s,” said Tom Shieber, the Museum’s senior curator and the lead curator on the Moe Berg exhibit. “Berg was such an interesting character, and we think people will see the exhibit and say: ‘This is really amazing. I want to learn more.’”

Born March 2, 1902, in New York City, Berg was educated at Princeton University and Columbia University. In 15 big league seasons with the Dodgers, White Sox, Indians, Senators and Red Sox, Berg hit .243 with little power or speed. But his brilliant intellect put him on a post-baseball path that would include a stint with the United States Office of Strategic Services, a government intelligence agency during World War II that was the predecessor of the modern Central Intelligence Agency.

The Museum’s collection contains hundreds of facsimile declassified O.S.S. documents relating to Berg, and the new exhibit features many of these and other historic documents, as well nearly two dozen artifacts, including a Red Sox cap worn by Berg and a bat he used in the mid-1930s. In addition to props used in the recent film, the exhibit also includes a bronze medal Berg earned at Barringer High School in Newark, N.J., in 1918 for proficiency in French, a Japanese language textbook Berg used and the U.S. Medal of Freedom that Berg’s family accepted after his passing in 1972.

A video component of the exhibit will showcase the ESPN 30 for 30 film “SpyBall,” an 18-minute documentary on Berg’s life.

“We’re so fortunate to have artifacts to be able to tell this story, which could – and does – fill up several books,” Shieber said. “We think it’s a unique story that our visitors will really enjoy.”

Access to Moe Berg: Big League Spy is included with admission to the National Baseball Hall of Fame and Museum.