It seems like something good happens whenever former big leaguer Aaron Rowand comes to Cooperstown.

“I just got some good pitches to hit. I ran into a couple balls today,” Rowand said modestly only a few minutes after the end of the game. “I had a good time out here with all these guys. It’s so much fun to be able to be around these guys, reminisce, tell stories, and share it with my son. The Hall of Fame does a great job and I thank them very much for putting this on every year because it’s been a lot of fun the last few years being able to come out here.

“If they ask me to come back next year, I’ll be here.” 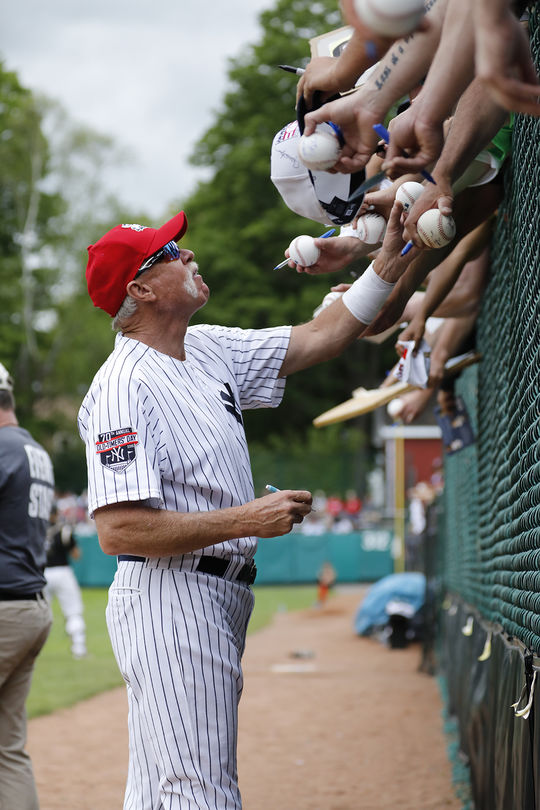 The ninth annual Hall of Fame Classic, featuring recently retired players from every big league franchise, took place under sunny skies at historic Doubleday Field before 5,218 fans. Hall of Famers Phil Niekro and Ozzie Smith served as skippers, with The Knucksies and The Wizards having as coaches Wade Boggs, Rollie Fingers, Goose Gossage and Juan Marichal.

Rowand, 39, who went 3-for-3 at the plate including a double and a walk, scored a run and knocked in two, including the game-winner, to help The Wizards to a 5-1 win over The Knucksies in the seven-inning exhibition. The only run scored by Team Knucksies was a homer from Willie Bloomquist. 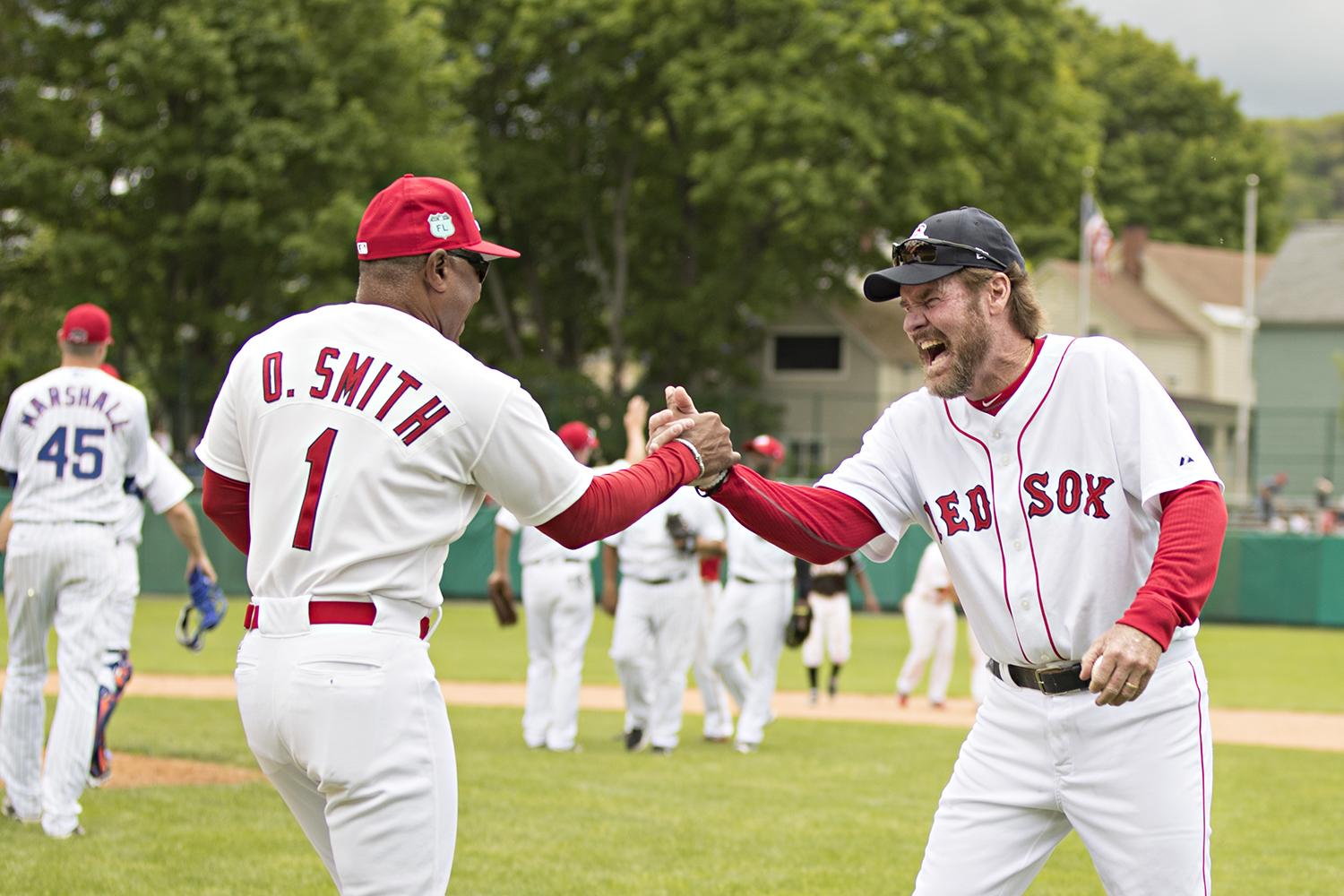 “If you’re going to fly across the country you might as well do something while you’re here. You don’t want to go home empty handed,” Rowand said with a laugh. “Whoever wins the MVP is whoever wins the MVP but just being able to come out here and play the game with these guys and share that experience with my son, McKay, that’s what it’s all about. This father-son trip that we’ve got going it seems every year now.

“This weekend means a lot to me. I grew up a big history buff as far as the game of baseball went and I tried to pass that on to my son. To be able to be here with him and come for four years in row and watch him enjoy himself and the knowledge and the people he’s gotten to meet over the years here is something truly special. It’s just a special time in a special place with a lot of unbelievably talented and special people. As soon as the roster comes out my son has it pulled up and says, ‘Dad, guess who’s coming?’ It’s a great experience for me but a greater experience to share with him.” 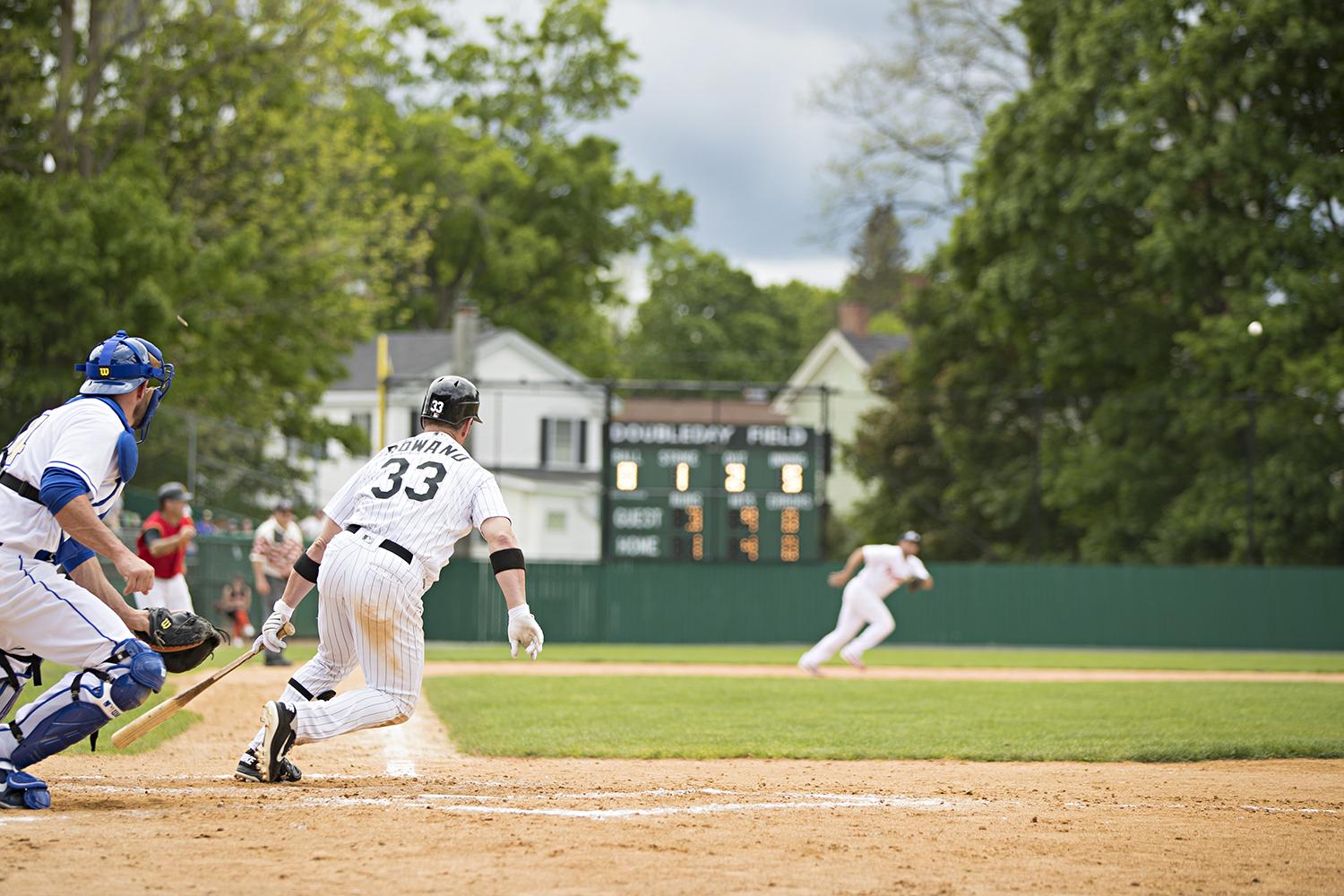 Before the Hall of Fame Classic Game, a Home Run Derby took place with six players, the finals of which featured Rowand and former catcher John Buck. After Buck went homerless in five swings during the finals rounds, Rowand’s first swing ended the affair with a ball pulled over the left-field fence. A surprise was the appearance of Boggs, who homered once in 10 swings in the opening round.

When asked after the Home Run Derby if he wished he had a few more swings, Rowand ironically replied, “I gotta try and save my bullets. Now that I won that I’m probably going to go hitless in the game.”

Just prior to the action at Doubleday Field, laughter filled Cooper Park as the Baseball Hall of Fame honored the 25th anniversary of THE SIMPSONS’ episode “Homer at the Bat” with a well-attended morning program outside the Hall of Fame Library entrance featuring a roundtable with executives from the long-running animated hit. “Homer at the Bat” featured nine active big league players at the time, three of whom – Boggs, Smith and Steve Sax – were featured in the roundtable discussion.

“I just want to say thanks to all the people involved with THE SIMPSONS. It transcends two generations, not only mine and my children growing up but the new generation that watched The Simpsons,” Boggs said. “Now they get a little flavor of what it was like 25 years ago when we took on this project and jumped on the vessel and sailed across unchartered waters to make something turn out funny. And who’da thunk it, 25 years later that Homer’s in the Hall of Fame.” 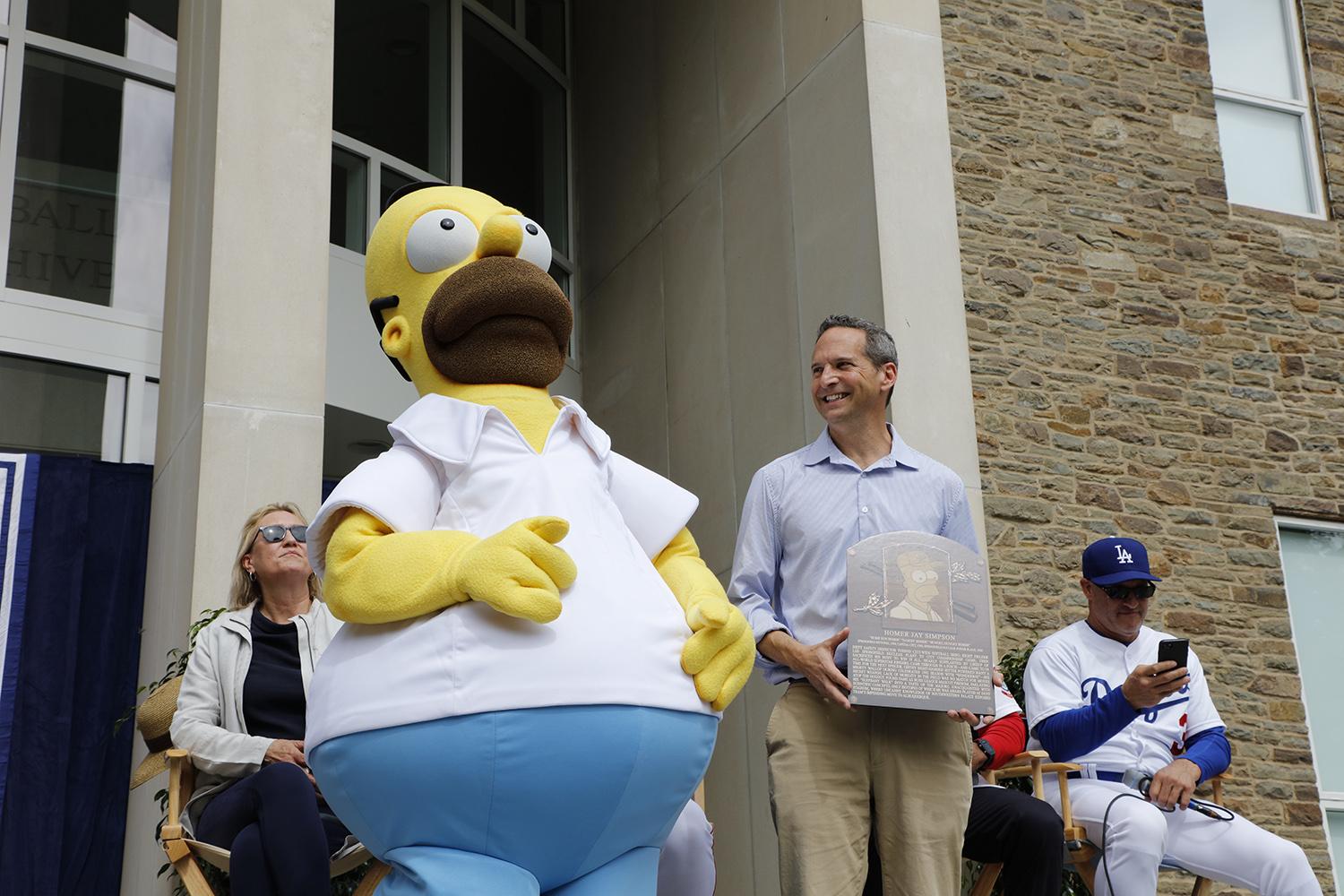 Homer Simpson was "inducted" into the Hall of Fame during a brief ceremony held before the 2017 Hall of Fame Classic legends game. (Milo Stewart Jr. / National Baseball Hall of Fame and Museum)

According to Smith, his voice acting role on The Simpsons is the second-most-asked question he gets from fans.

“The first one is can you still do the flip. And the second one is how did you enjoy being a part of THE SIMPSONS?” Smith said. “I think that as you can see here, we all had a great time being a part of this. We’re very appreciative of the opportunity that had to be a part of something so special. You guys were great to work with and thank you for allowing us to be a part of it.”

Sax, a five-time All-Star second baseman and National League Rookie of the Year in 1982, told the crowd a funny story of how his appearance paid off in another way.

“I actually got pulled over in Virginia and I was in the middle of nowhere,” Sax said. “Some guy pulled me over, this young officer, and he recognized my license from California. He was a baseball fan and he said, ‘You’re Steve Sax, right?’ First thing he said was, ‘Loved you on The Simpsons.’ And I didn’t get a ticket.”

“It was such a thrill to do a show like THE SIMPSONS, which is so great, and then to meet these guys, our heroes, to actually say, oh, we can meet them and talk to them and they’ll be on the show, is like this huge, I wouldn’t even call it a fringe benefit, another wonderful thing about the show,” Jean said. “And now to be here at the Hall of Fame, where they’re honoring the players and us, I cannot tell you what a dream come true it is for a kid from Detroit. I just want to say thank you to everybody. This is just one of the greatest days I could possibly get.” 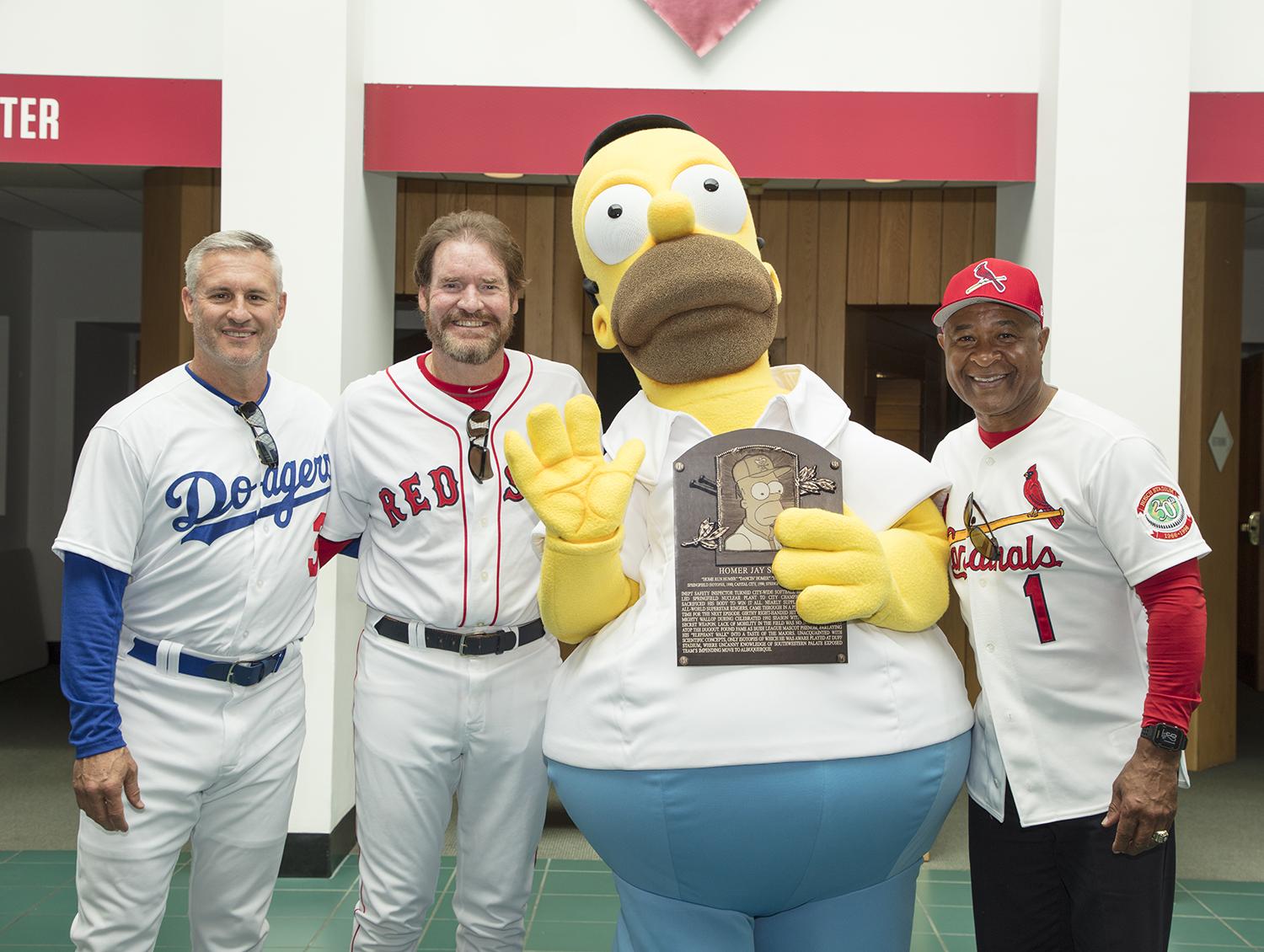 After the roundtable discussion and prior to the official ribbon-cutting on a SIMPSONS-themed exhibit in the Museum, Homer Simpson was “inducted” into the Hall of Fame. Wearing a blue suit, white shirt and sporting a red tie, with a Baseball Hall of Fame logo pin on his lapel, an animated Simpson, standing inside an empty Springfield ballpark, provided a prerecorded 37-second Baseball Hall of Fame induction speech.

“It is with great humility I enter the Hall of Fame. And it’s about damn time. I’m fatter than Babe Ruth, balder than Ty Cobb, and have one more finger than Mordecai ‘Three Finger’ Brown,” Simpson said. “Like most baseball players I only show up for work for 150 days a year. If the Cubs can win the World Series, and a cartoon can enter the Hall of Fame, there are no rules. The apocalypse is nigh. I will be heading directly from here to my bunker in Utica. Now enjoy the day. And if you see someone in a walk-around suit claiming to be me, kick him in the butt or stomp him on the foot. Thank you. Not responsible for injury to person inside suit.”

The text of the Simpson Hall of Fame plaque reads: “Inept safety inspector turned city-wide softball hero. Right fielder led Springfield Nuclear Plant to city championship game, then sacrificed his body to win it all. Nearly supplanted by a lineup of all-world superstar ringers, came through in a pinch—and came to in time for the next episode. Girthy right-handed hitter powered many a mighty wallop during celebrated 1992 season with “Wonderbat”—his secret weapon. Lack of mobility in the field was no match for moves atop the dugout. Found fame as bush league mascot phenom, parlaying his “Elephant Walk” into a taste of the majors. Unacquainted with scientific concepts, only isotopes of which he was aware played at Duff Stadium, where uncanny knowledge of southwestern palate exposed team’s impending move to Albuquerque.”

A pair of veteran major leaguers, Todd Zeile and Craig Monroe, both had glowing remarks when asked about their weekend in Cooperstown and visiting the Hall of Fame.

“I guess it’s a testament to longevity and playing with a lot of teams and being able to sustain a decent career,” said Zeile, when asked about the three bats he had donated to the Hall of Fame. “And the thing that is really fun about it now is that there’s a lot of guys that I played with and against in my career that are here enshrined forever.”

“Oh, amazing, absolutely amazing,” said Monroe about his experience. “I got a chance to visit here when I played with the Hudson Valley Renegades when I was 19 years old and you appreciate it but getting an opportunity to put on a major league jersey, live out that childhood dream, and now to walk in here is a different feeling. It’s very emotional. I can’t describe the feeling. I’m getting goosebumps looking at all the different things. I feel truly blessed.” 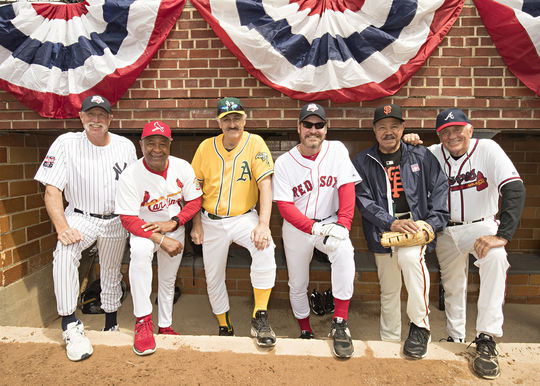 A Classic to Remember

Aaron Rowand hit 136 home runs during his 11-year big league career. None may have been as memorable as the one he knocked out of the park Saturday.

Heroes Shine at Saturday’s Hall of Fame Classic in Cooperstown

More than 150 baseball-loving youngsters, some wearing caps, others sporting a jersey from their favorite team to learn a thing or two from former major leaguers.