A Classic to Remember

Aaron Rowand hit 136 home runs during his 11-year big league career. None may have been as memorable as the one he knocked out of the park Saturday.

Rowand, an outfielder with the White Sox, Phillies and Giants who retired after the 2011 season, smacked a two-run shot off of pitcher Steve Woodard that landed in the trees behind the left-field fence at Doubleday Field in the bottom of the sixth inning that helped Team Knucksie, a group of former American League players led by manager Phil Niekro, to a 7-5 Hall of Fame Classic win over Ozzie Smith’s National League Team Wizards on a beautifully sunny afternoon tilt on Cooperstown’s historic ballpark.

As a result of Rowand’s offensive outburst, which also included a two-run double off Steve Avery in the first inning, he was rewarded with the game’s Bob Feller Player of the Game Award. 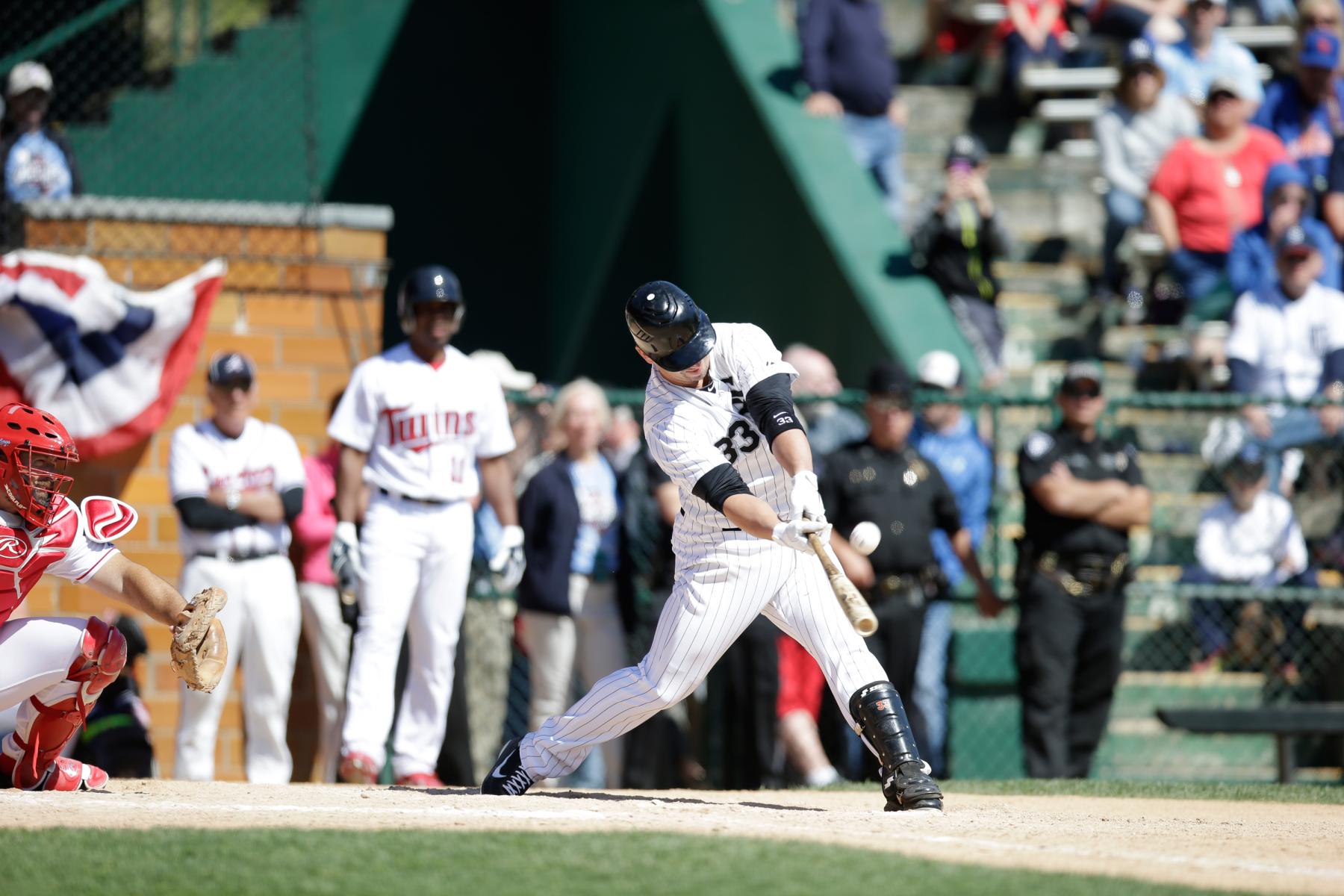 Aaron Rowand won the Bob Feller Player of the Game Award at the 2015 Hall of Fame Classic after driving in four runs in Team Knucksie’s 7-5 victory. (Jean Fruth / National Baseball Hall of Fame)

“It’s just such a great weekend and an honor to be able to be out here. It really is,” said Rowand minutes after accepting the MVP honor. “This is my second straight year here and I’d come back every year if they let me. Sooner or later they’re going to start bringing in other guys, and I understand that, but it’s a privilege to be able to be here and do this right now.”

As for his batting exploits, Rowand said, “You know what? For not swinging the bat for a while I was feeling pretty good. I was seeing the ball better the more at bats I was getting under my belt, feeling a little more comfortable each time, and the pitches certainly didn’t look like they were coming in as hot as they were the first at bats. The homer came off a 3-2 fastball. I just got good wood on it. It’s nice to be able to do something to help our ballclub win a game. And the double was off a cutter in. But it’s hard to really put all this into words and explain how you did it when you haven’t hit consistently.”

But what made Rowand the most emotional during this exhibition game made up of 30 recently retired big leaguers was what he found when he crossed home plate after his round-tripper.

“What made this day even more special was my 10-year-old son McKay being here and him serving as a batboy,” Rowand recalled. “He almost had me in tears when he was standing at home plate waiting for me. That’s probably one of the more special moments of my entire baseball career.”

“If I go out there and hit 95 miles per hour I might look at coming back,” Oswalt said with a laugh before the game – and Oswalt threw with as much or more velocity than any of the pitchers on Saturday. “I threw a bullpen before I came out just to make sure I could get it over the plate. I told these guys don’t dig in too much – I don’t know how wild I’m going to be.”

All in all, it was a special day for the 5,338 fans who attended the seventh annual Hall of Fame Classic. Prior to the game’s start, a Home Run Derby was held with six former major leaguers – Rowand, Kerry Robinson, Vinny Castilla, Rick Ankiel, David Dellucci and Bobby Abreu. In the end, former Rockies slugging third baseman Castilla was crowned champ by hitting six homers in 12 at bats.

“It feels great,” Castilla said. “I love to hit. Baseball is my life and my passion. Hitting never gets old. I love to go out there and take some swings, especially those last two. I knew I had those. And the short dimensions are beautiful.” 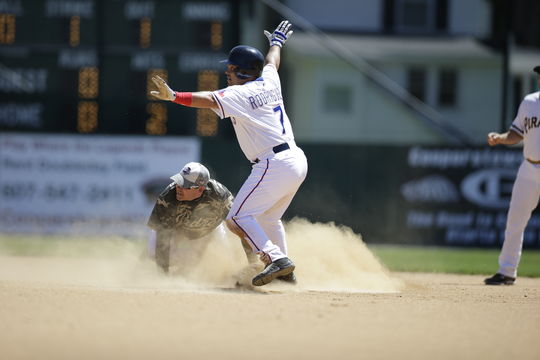 Iván Rodríguez steals second base while Mark Loretta checks out the umpire’s call at the 2015 Hall of Fame Classic at Doubleday Field. (Jean Fruth/National Baseball Hall of Fame and Museum) 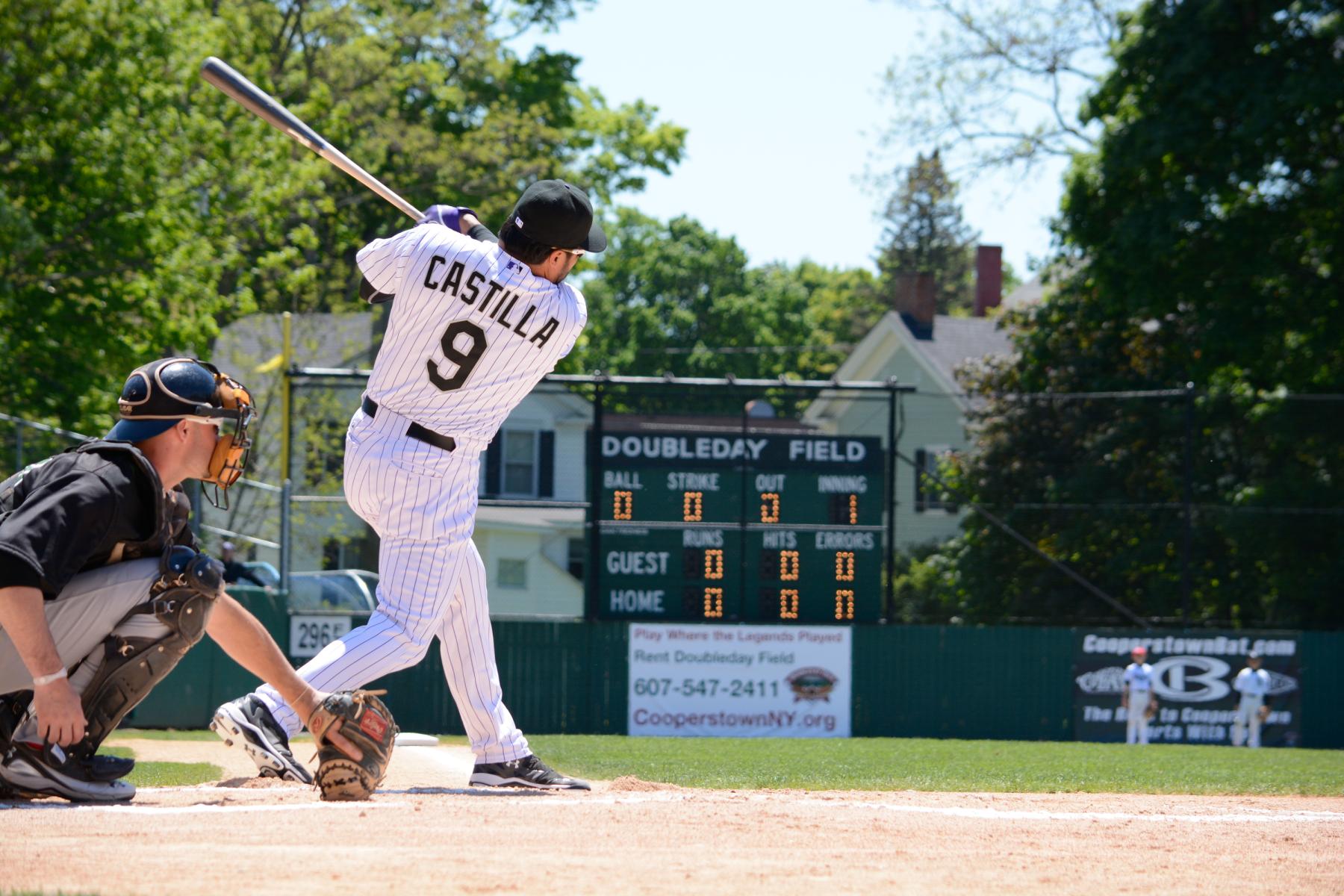 Castilla also had high praise for his pitcher during the Derby, Hall of Famer Phil Niekro.

“I’ve known Phil for a long time. His was my manager in Triple-A with the Richmond Braves and was the one that gave me the great news when I got called up to the big leagues,” Castilla said. “So I have a special place in my heart for Phil.”

Besides Niekro and Smith, other Hall of Fame members who took part in the Classic and served as coaches included Tom Glavine, Robin Yount, Rollie Fingers and Tony Pérez.

“You put your uniform on now and your thought process is don’t do anything to get hurt,” Glavine joked before the game. “But it’s always good to have it back on, it’s good to be around the guys and kind of have that camaraderie again and talking baseball again. It’s always good to do that.”

Glavine also shared his thoughts on longtime Braves teammate John Smoltz being inducted into the Hall of Fame on July 26.

The Edmunds family members, all from Cooperstown, included brothers Josh, Caleb and Peter, and sister Heidi.

"It's not always easy to run together; we have to sort of mesh our work schedules,” said Caleb Edmonds. “But we love it. It was an awesome morning for running.” 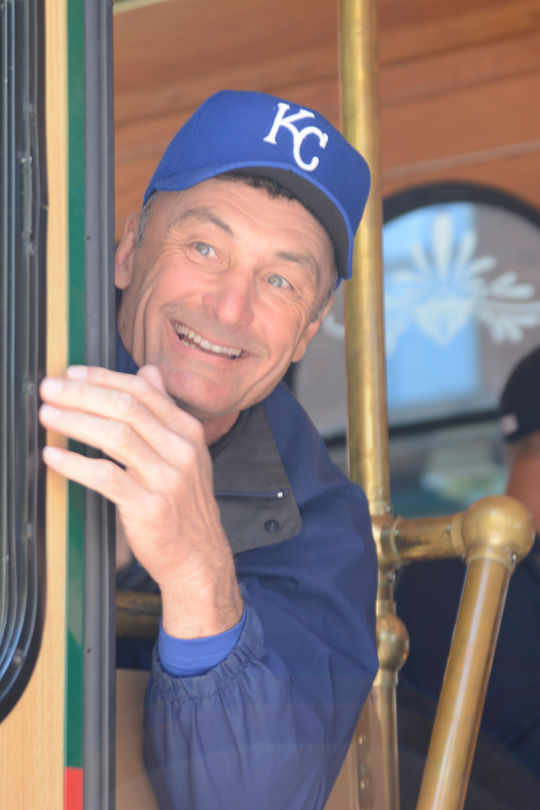 Jim Eisenreich checks out the fans during the Cooperstown Game Day Parade prior to the May 23 Hall of Fame Classic. (Milo Stewart, Jr. / National Baseball Hall of Fame)