Whether it ends in a cup of coffee or a Hall of Fame career, the stories of most big league careers begin at the Major League Baseball Draft. Now, the origins of those stories are being uncovered in Cooperstown.

After residing for more than 10 years in the Museum’s archives, a large collection of draft-related documents belonging to former MLB executive George Pfister are now being examined and catalogued by Museum manuscript archivist Claudette Scrafford. The documents, donated by the MLB Commissioner’s Office to the Hall in 2002, illustrate the evolution of baseball’s Rule 4 and Rule 5 drafts from the late 1960s to the 1990s.

Furthermore, each of the thousands of pages in the collection feature an endless cascade of names, position, heights, weights and schools. Behind all of these disparate names lay a common dream: To play on the big league diamond.

Pfister himself was able to realize that dream, if only for one day. While he played 11 seasons in the minor leagues, Pfister, a catcher, appeared in one game for the Brooklyn Dodgers in 1941 and went 0-for-2 at the plate. Ironically, the man who would later donate piles of signing records to the Hall gained notoriety for not having a major league contract when Hall of Fame manager Leo Durocher inserted him midway into that late-season game against the Philadelphia Phillies.

After his brief time in The Show, Pfister coached in the Dodgers’ minor league system before serving as the New York Yankees’ farm director from 1965-1974. Then, Pfister was hired to work in the Commissioner’s Office’s baseball operations department, eventually serving as the point man for the MLB amateur draft until his passing in 1997.

In just a few short weeks, the late Pfister’s collection will be open for viewing by the general public in the Museum’s Giamatti Research Center. As visitors will discover, documenting the hundreds of picks in each year’s draft was a much more monumental and painstaking task than it is today. 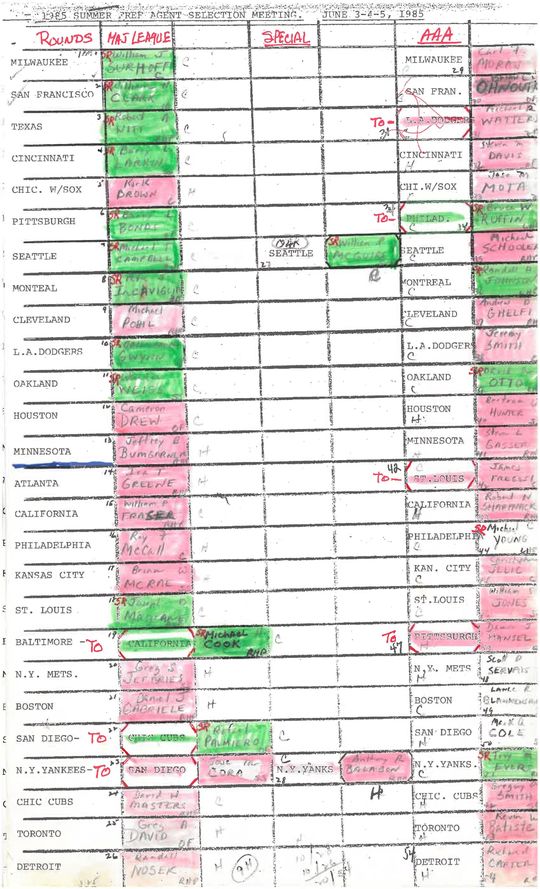 A handwritten draft sheet from the opening rounds of the 1985 MLB Draft. (National Baseball Hall of Fame Library)

A Tool For Success

Created in 1965 to restore competitive balance and curb the inflated signing bonuses given to unproven players, the amateur draft is now recognized by MLB teams as a crucial tool to ensuring their long-term success.

“Teams that can’t sign and develop their own players are going to have a difficult time being successful,” said Joe Garagiola, VP of standards and on-field operations for Major League Baseball, in 2010. “It all starts with the draft.”

From all accounts, the inaugural draft was a chaotic affair. It was a completely new experience for each of the 20 teams in attendance, and with an unlimited amount of picks at their disposal, some teams covered all of their bases during the preparatory stages. In an interview with Baseball America, Pittsburgh Pirates general manager Joe Brown recalled that he and his staff arrived in New York City with a list of approximately 450 players in mind.

“We really went into it blind,” said Brown. “We all brought trunk-fulls of player reports to New York and all of us sat in the hotel room for four or five days. The scouting director put all the reports in the order he had, and then we’d bring up each name and consider it.”

As the Pfister collection, which begins with the 1968 Draft, shows, the league office dealt with a similar surplus of paper and information on draft day. Before computers, the Internet and social media, meticulously handwritten notes and draft charts were the norm. The earliest draft sheets were written out in pencil and shorthand cursive script. These notes were then dictated via typewriter before they were distributed through snail mail to major league clubs.

“Based on these documents, I thought the draft seemed pretty organized,” said Scrafford, “especially when you consider that there were no computers at the time. Everybody knew their role and knew when it was their turn to pick.” 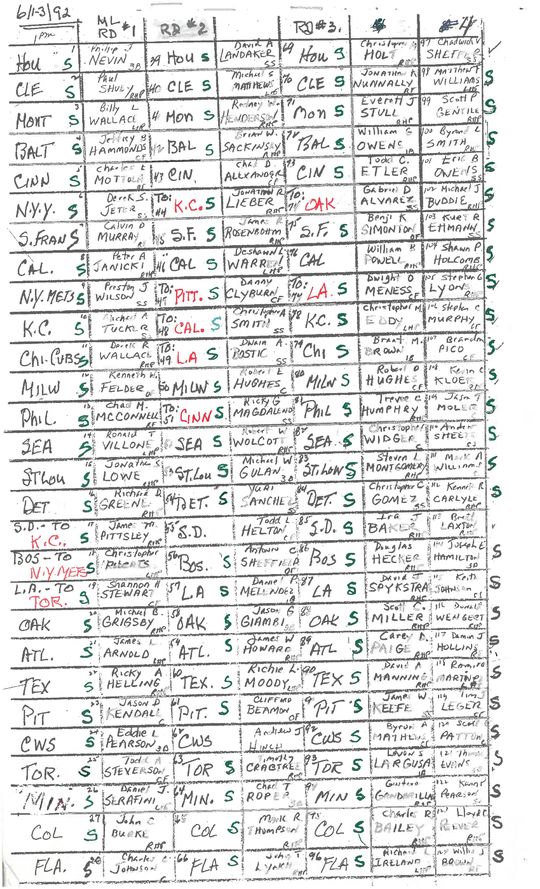 Aside from its showcase of early documentation, the Pfister collection offers a unique glimpse into the inner workings of a league office. Pfister’s duties spanned beyond organizing draft day proceedings; in fact, the collection shows that keeping track of prospects is a year-round task.

A box from 1991, for instance, contains handwritten correspondence from amateurs declaring their wish to be included in the amateur draft. Per MLB rules, players must have either graduated high school, be enrolled in a junior college, or completed at least their junior year at a four-year college before they are declared eligible for the draft. Prior to the days of email and sports information websites, the onus was on the prospects to send letters to make Pfister and his colleagues aware that they were draft eligible.

“I didn’t expect to see that,” Scrafford said of the handwritten letters. “I guess you just assume that when players go from high school to college that they’re being scouted and they get invited — or their coaches write letters of recommendation. I didn’t realize that players had to be so hands-on with the draft.”

Among the highlights of correspondence from that year is a letter from the Texas A&M University registrar’s office informing Pfister that a prospect had not enrolled in their university as he had claimed. There’s also a packet of legal documents provided by former Houston Astros executive Bill Murray that proves a prospect who had defected from Cuba was eligible to play in the United States.

The most striking handwritten letter is one penned by future Hall of Fame pitcher Bert Blyleven to Pfister in 1991, in which he states his son Todd’s intent to enter the June draft.

“Dear George,” the letter begins, “This letter is to inform you and your office that our son, Todd Andrew Blyleven, is no longer attending the University of Oklahoma...We understand that with this letter, Todd will now be eligible for the June 1991 draft.” 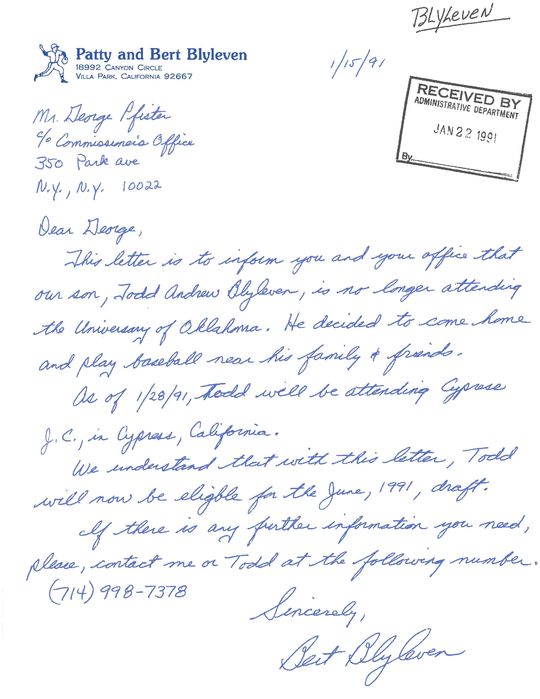 A handwritten letter penned by future Hall of Fame pitcher Bert Blyleven to MLB executive George Pfister in 1991, in which he states his son Todd’s intent to enter the June draft. (National Baseball Hall of Fame Library)

Deep in the stacks

Of course, even if all of the prospects’ letters and all the team’s scouting reports are in perfect order, drafting the right unproven player will always be an inexact science.

The first half-century of drafts have provided a long list of busts and hidden gems alike. Of the tens of thousands of players drafted in the last half-century, only 30 players who were signed by the team that drafted them have gone on to earn a place in the Hall of Fame. Over the last 20-plus years, an average of about one Hall of Fame electee per year is a former draft choice.

Legends are not always found at the top of the selection sheet. In fact, the Baseball Writers’ Association of America has yet to elect a No. 1 overall selection, though former first overall picks Ken Griffey Jr. (Seattle Mariners, 1987) and Chipper Jones (Atlanta Braves, 1990) will be first-time eligible players on the BBWAA Hall of Fame ballot in 2016 and 2018, respectively. Reggie Jackson, drafted No. 2 overall by the Kansas City Athletics in 1966, is the highest draftee to be enshrined in Cooperstown. 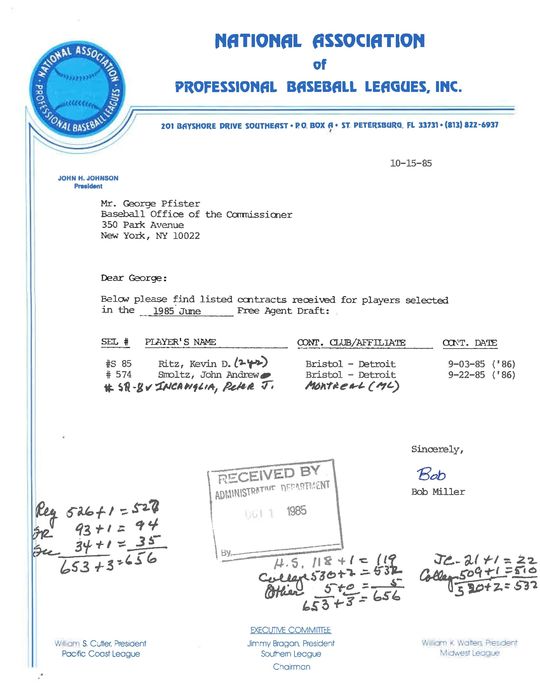 A letter sent from the National Association of Professional Baseball Leagues (NAPBL) to MLB executive George Pfister in October 1985. The letter lists the most recent contracts signed by players selected in the June 1985 MLB Draft, including future Hall of Fame pitcher John Smoltz. (National Baseball Hall of Fame Library)

The names of other inductees, however, are found deep within the stacks. Visiting researchers will need to flip through many pages to find Hall of Fame second baseman Ryne Sandberg’s name as the 511th pick in 1978. Likewise, the Detroit Tigers chose Class of 2015 inductee John Smoltz in the 22nd round – the 574th overall pick – in 1985, the lowest round ever to feature a future Hall of Famer. 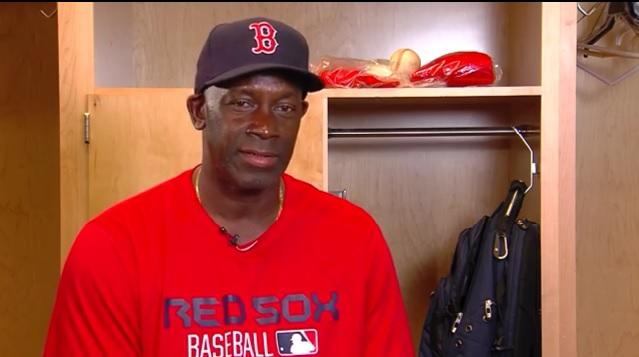 Whether it’s a revered player like Derek Jeter or an unknown prospect whose dream fell short, Scrafford said the Pfister collection can help researchers bring draft day stories to life.

“If you’re a researcher, especially one who is writing biographies on specific players, these will help you trace back to where that player began,” she said. “Some players were drafted but didn’t initially sign, and these give you a sort of paper trail.

“If you’re looking at the history of Major League Baseball and the draft, this really gives you an eye-opener to exactly how things were done.”