A quick glance at the box score of the Philadelphia Athletics and St. Louis Browns game on Aug. 24, 1951 would suggest that nothing was out of the ordinary. It seemed to be a typical Friday game, between two teams who were far out of playoff contention.

But with Bill Veeck at the helm of the St. Louis Browns, that game was anything but typical.

On that day, Veeck orchestrated “Grandstand Managers Night,” a promotion which allowed fans to vote on key decisions during the course of the game, using placards which read “yes” or “no.”

Over 1,000 “grandstand managers” sat in a special section behind the Browns dugout, while Browns manager Zack Taylor relaxed in a rocking chair in the next box over, in casual clothing and a pipe in his mouth, as he enjoyed his night off.

The fans began their short-lived managerial careers by deciding the lineup of the game. They wrote their choices on lineup cards, delivered to the Browns prior to the game. After tallying fan responses, a lineup was decided on.

Philadelphia Athletics’ manager Jimmy Dykes was far from amused, telling the Associated Press that Veeck was “making a farce of the game.”

But the controversial Veeck saw his promotions as a way to raise fan experience to a whole new level. He would later explain to Sports Illustrated that, “the fan comes away from the ball park with nothing more to show for it than what’s in his mind, an ephemeral feeling of having been entertained. You’ve got to heighten and preserve that illusion. You have to give him more vivid pictures to carry away in his head.”

Just five days earlier, on Aug. 19, 1951, Veeck had stunned the baseball world and delighted fans by sending 3-foot-7 Eddie Gaedel up to bat in a game against the Tigers.

It’s safe to say that the “grand stand managers,” as well as the 6,000 other fans who watched on as the fate of the game was decided by spectators, walked away with vivid pictures. 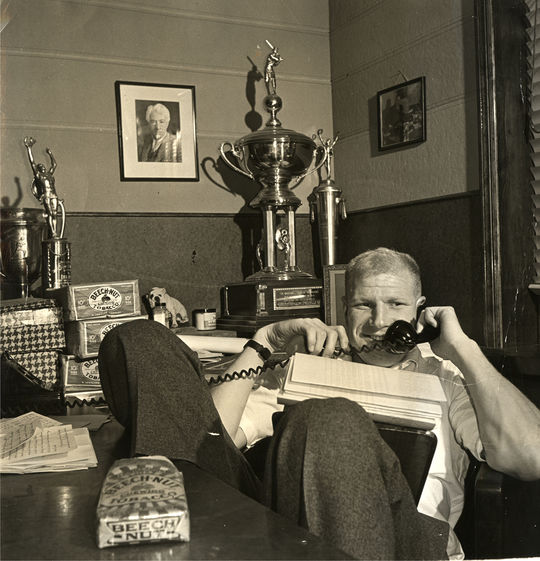 Bill Veeck saw promotions like "Grandstand Managers Night" as a way to raise fan experience to a whole new level. Hank Greenberg would say that Veeck "brought baseball into the 20th century. Before Bill, baseball was just win or lose. But he made it fun to be at the ballpark.” (National Baseball Hall of Fame) 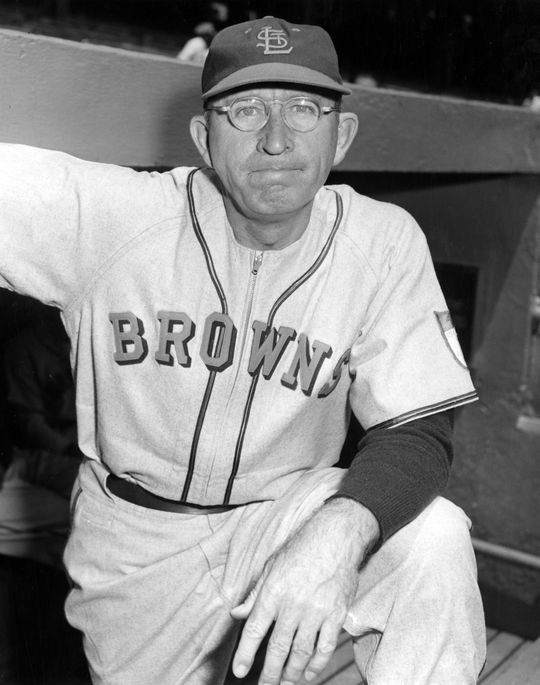 Zack Taylor thoroughly enjoyed "Grandstand Managers Night," as he watched the "grandstand managers" guide his St. Louis Browns to a 5-3 win against the Athletics. (National Baseball Hall of Fame) 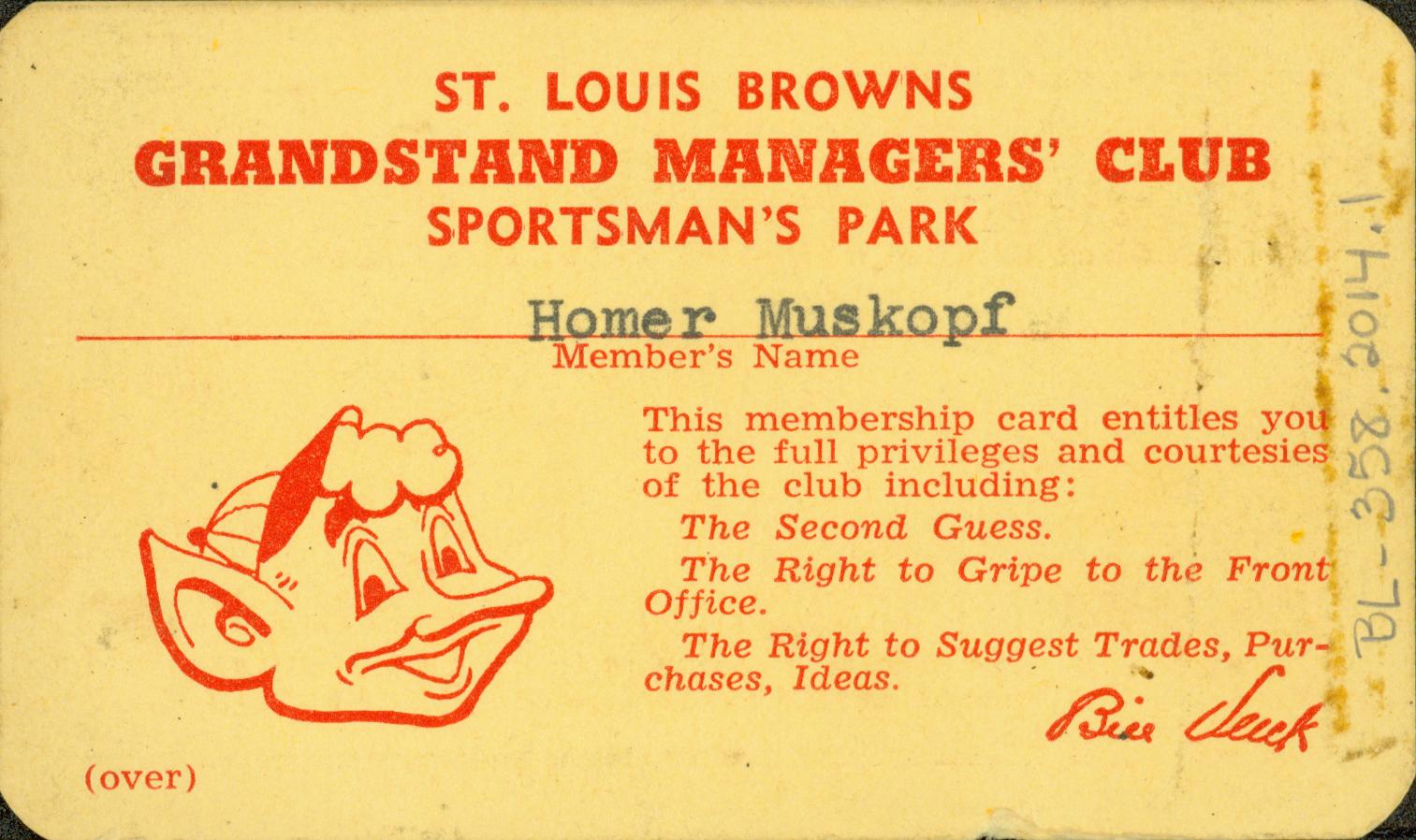 This ticket, belonging to a St. Louis Browns fan, was created specifically for Grandstand Managers' Night. It is now preserved in the Hall of Fame's collection. (National Baseball Hall of Fame)

All things considered, the managers didn’t do a bad job, as the majority of their decisions were the right ones. They ruled for the Browns infield to play back and try for a double play when there were two men on base for the Athletics – and Pete Suder hit into a double play to end the inning.

They also advised catcher Sherm Lollar not to attempt a steal from first base to second, due to his slow speed. Lollar would drive in two runs that game.

After a shaky first inning during which starting pitcher Ned Garver gave up three runs, he would hold the Athletics to those three until the end of the game, with the assistance of the “grandstand managers.” The Browns would win the game 5-3, raising their record to 38-81. 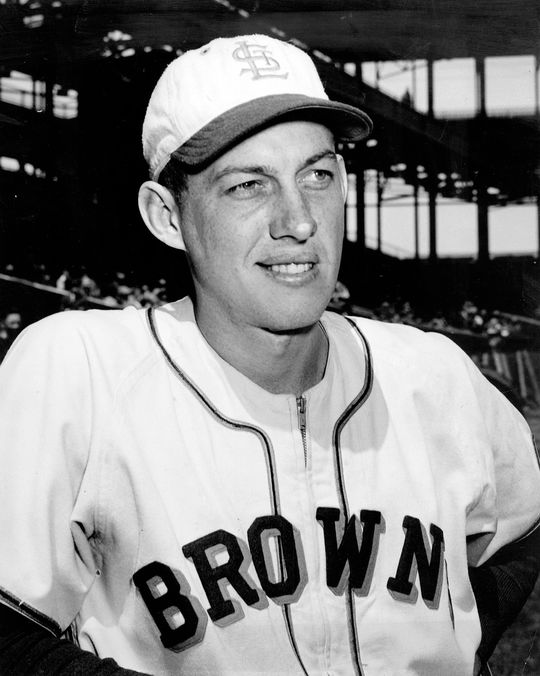 Sherm Lollar, who played catcher for the St. Louis Browns, was instructed not to attempt a steal by the "grandstand managers." (National Baseball Hall of Fame)

The night concluded with a fireworks show that wrote out “Thanks G.S. managers for a swell job. Zack manages tomorrow.”

Veeck’s 45 year-long career would be anything but dull, as he signed the first African-American player in the American League, the first – and last – midget in all of baseball, and held a “Disco Demolition Night.” But while these promotions pushed the game to new limits, they also kept the fans interested by creating new ways to enjoy the National Pastime.

As Hank Greenberg once said, Veeck “brought baseball into the 20th century. Before Bill, baseball was just win or lose. But he made it fun to be at the ballpark.” 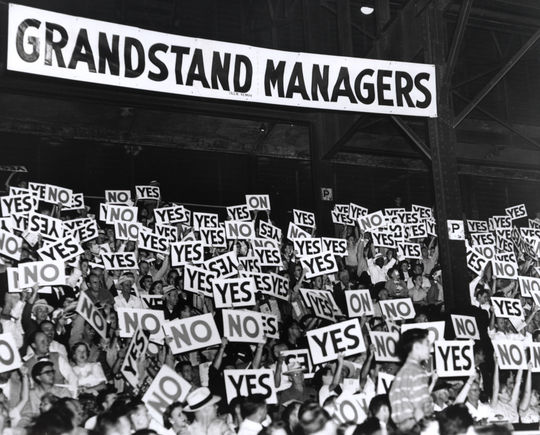 “Grandstand Managers Night” allowed fans to vote on key decisions during the course of the game, using placards which read “yes” or “no.” (National Baseball Hall of Fame)