Pedro Martinez’s life has certainly changed in the nine months since his last visit to Cooperstown.

This past May, Martinez was a starting pitcher and tossed a scoreless inning in the 2014 Hall of Fame Classic legends game held at Cooperstown’s historic Doubleday Field. On Jan. 6, the Baseball Writers’ Association of America announced the Hall of Fame elections of not only Martinez but also fellow pitchers Randy Johnson and John Smoltz, as well as second baseman Craig Biggio.

It’s humbling to see how much history has gone through. And to become part of it is a great honor. I’m a blessed man today.

“This is going to be the only team I will never be released from,” said a beaming Martinez, standing in the National Baseball Hall of Fame’s Plaque Gallery on the afternoon of Friday, Feb. 27. “I’m extremely proud to just be here, be part of this, and now I’m going to be on one of those walls later on.

“It’s humbling to see how much history has gone through. And to become part of it is a great honor. I’m a blessed man today.”

Martinez and wife Carolina were in Cooperstown for their Orientation Visit, an annual rite for all living inductees in preparation for their Induction Ceremony. Martinez, who received 91.1 percent of the BBWAA vote in his first year on the ballot, will be returning for the Induction Ceremony, featuring the four electees, to be held on Sunday, July 26, at the Clark Sports Center.

Martinez, dressed casually in a brown sweater and black jeans, and accompanied by his wife, went on a tour of the Museum’s collection storage area guided by Hall of Fame Vice President of Exhibitions and Collections Erik Strohl. The 43-year-old right-hander, looking as if he could still strike fear in a batter, was shown artifacts he had donated from his own career as well as others from the game’s long history.

Museum staff had displayed the jersey he wore in the 1999 All-Star Game, the year he was the starting and winning pitcher for the American League squad. He would strike out the game’s first four batters and five in two innings en route to MVP honors. 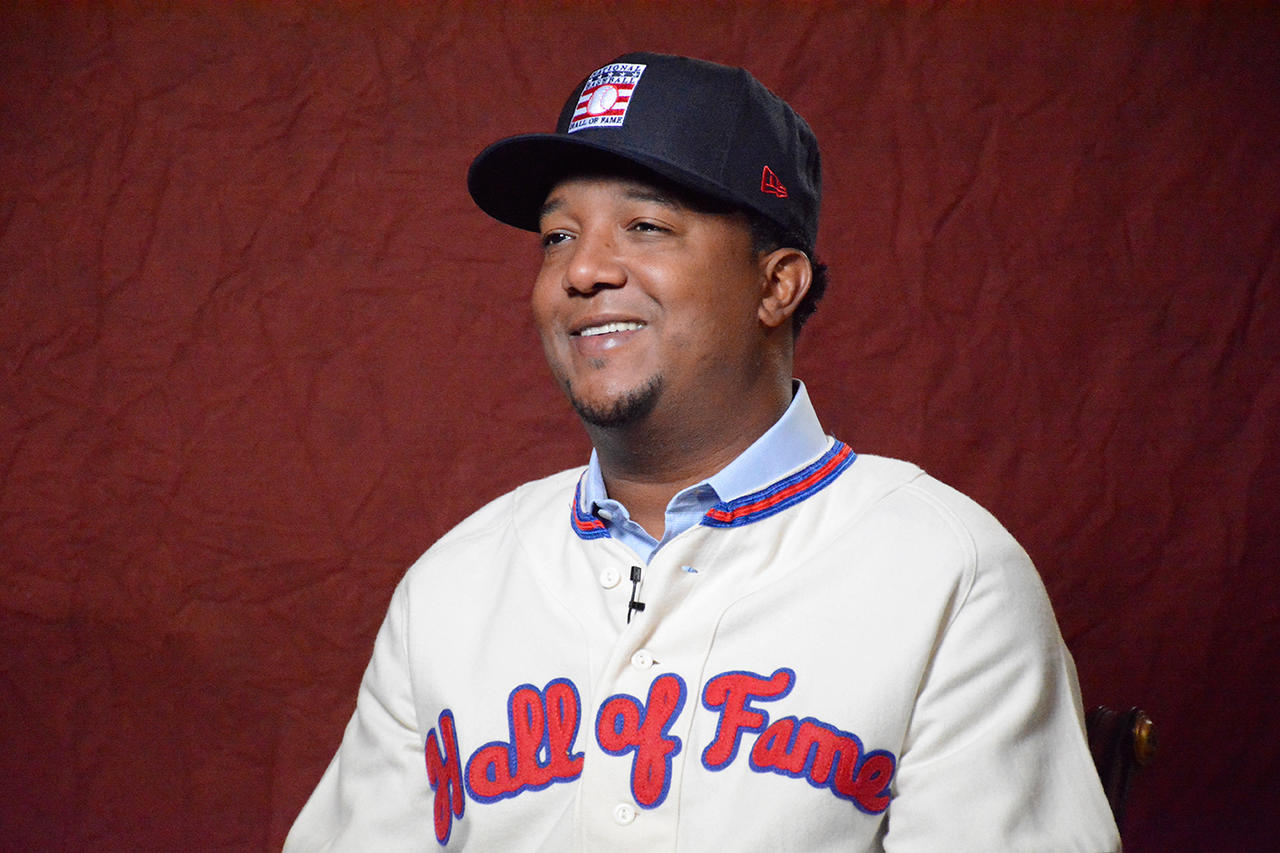 Also on display, his Red Sox cap from the 2004 World Series, the franchise’s first title since 1918, and a ball from his 1995 game when, pitching for the Montreal Expos at San Diego, he retired the first 27 batters before giving up a double to Bip Roberts in the bottom of the 10th inning.

“Bip Roberts is not the one to blame. My team couldn’t score,” Martinez recalled. “But Harvey Haddix [who lost a 1959 perfect game in the 13th inning] got the loss and I got the win.”

Strohl then showed Martinez a glove used by Hall of Fame pitcher Rube Waddell in a famous 1905 game against Cy Young in which both went 20 innings. When Strohl called Waddell “one of the first really great left-handed fireballers,” Martinez seemed incredulous.

“Fireballers? You’re going to call fireballer someone that throws with this?” Martinez asked, pointing to the Waddell glove. “Now you tell me that you’re going to catch Aroldis Chapman with a glove like this? You tell me if he was a fireballer. No, no, no, no. It’s impossible. You can’t catch Aroldis Chapman with this. It’s impossible. I have always had that question. The first year that I came in and saw this I couldn’t help myself to ask how can you catch a 100 mile per hour fastball with this glove? Where would your fingers be? Your hand would explode. 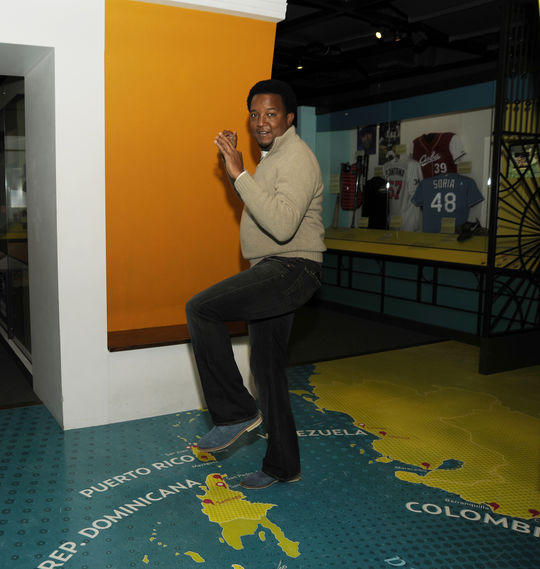 Though Martinez was slight of stature, he dominated his era like few others. With an explosive fastball and pinpoint control, he established himself with Montreal, winning the 1997 NL Cy Young Award, while his seven years in Boston led to two more Cy Young awards, a pitching Triple Crown, and in 2004 helped the Red Sox captured the World Series title for the first time since 1918.

“This is what I’m talking about,” said a smiling Martinez when allowed to swing a bat used by Babe Ruth. “You’ve got to really have it to turn on a 100 mph fastball. Especially point and say I’m going to hit it in straightaway centerfield out. I would pay to see that. I would just love to see that challenge. Someone has to come up with something to make it virtually possible. Yeah, I want to face Babe.”

After checking out images from his career in the photo department and a Pedro Martinez comic book in the Library, the tour came to an end in the Plaque Gallery. This is where Martinez made sure to not only check out the bronze likeness of fellow Dominican Juan Marichal but also see where his own plaque will hang this summer. 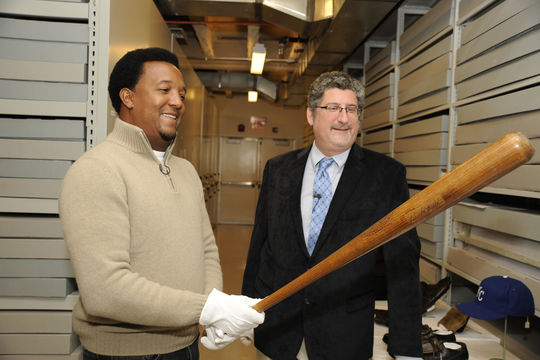 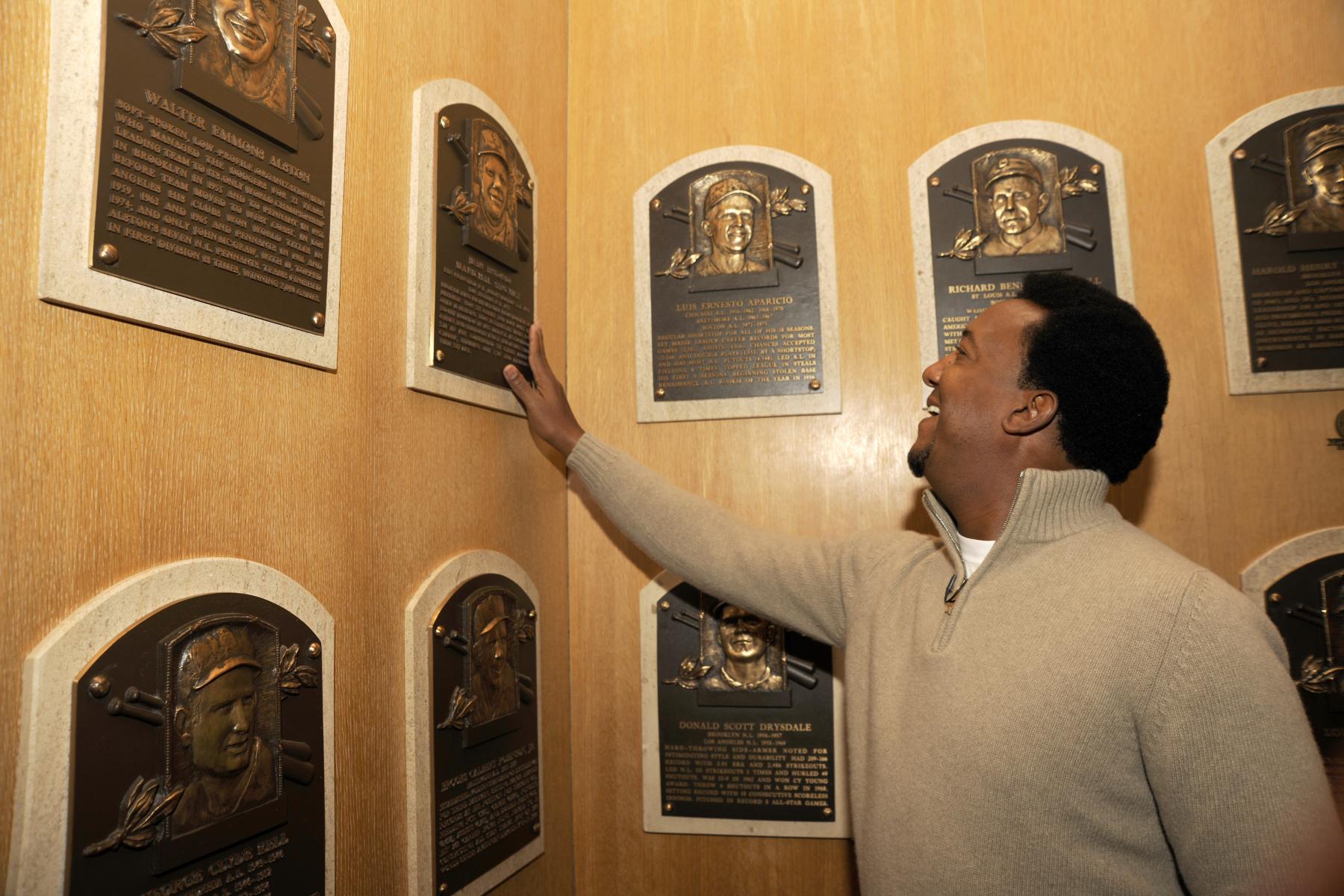 “I think it will be really interesting to see how the people react when they see my plaque right along with the cream of baseball. I think it’s going to be really emotional to all of us.”