Two of a Kind

Part of the POP UPS series
Written by: Jacob Pomrenke

Midway through Babe Ruth’s first season with the New York Yankees in 1920, after he had already broken his own single-season home run record of 29 and was on his way to shattering a dozen other statistical marks, he began to publicly express his home run goal for the year: “A half-century.”

It was a lofty goal. No one at any level of professional baseball had ever hit 50 home runs in one year. Only a handful of major league players had even hit 50 in their entire careers. But for Ruth – and Ruth alone – the goal seemed not only possible but realistic.

Later that season, as Ruth moved closer to that magic number, F.C. Lane, the respected editor of Baseball Magazine, observed, “Babe is particularly good at shattering records. His favorite stunt is to break a record so old that it has grown moldy and crumbly, setting up a brand new one of his own creation in its place and then, in a fit of dissatisfied petulance, thrusting that new-made record roughly one side to make room for a still fresher creation.”

Lane’s description didn't just apply to Ruth's home runs. In 1920, the Sultan of Swat stormed past nearly every power-hitting record that baseball writers could dig up — and even a few that hadn't been invented yet.

But before anyone had time to put Ruth’s performance into historical context, he spent the 1921 season rewriting the record books all over again. Almost a century later, Ruth’s 1920 and 1921 seasons remain as impressive as ever, and they are considered by many to be the most dominant back-to-back seasons in baseball history.

When Ruth was traded to the Yankees by Boston Red Sox owner Harry Frazee in January 1920, he was already considered to be the best slugger in the game. He had led the American League in home runs for the first time in 1918 with 11. In 1919, he more than doubled his total to set the single-season record with 29 homers.

In 1920, the 25-year-old Ruth singlehandedly brought baseball into the Live Ball Era with a season for the ages. After a slow start — he didn't hit his first homer for the Yankees until May 1 — he went on a tear with 12 homers apiece in May and June, more homers in a single month than anyone had hit all season in 1918. Ruth broke his old home run record on July 19 by hitting homers Nos. 30 and 31 off Chicago White Sox left-hander Dickey Kerr at the Polo Grounds, the Yankees’ home ballpark. There were still 66 games left in the season; no one had ever seen a baseball record fall so quickly. And the Bambino was far from finished. 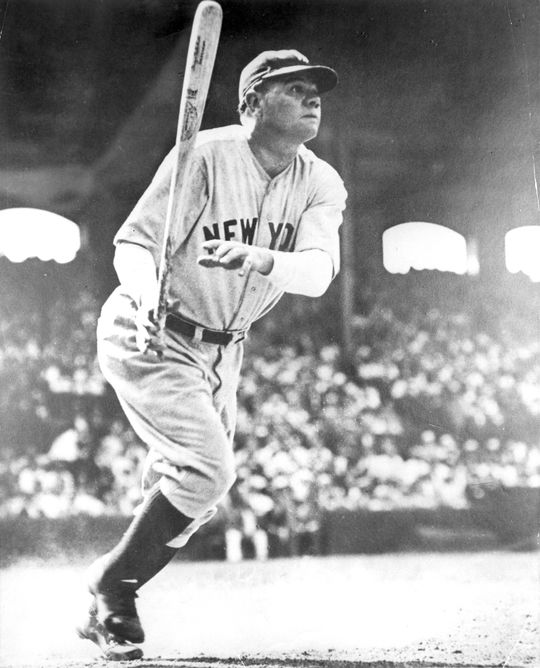 “I wish someone would describe to me just the kind of batter [coming] along in 1940, or maybe 1999, who will take Babe Ruth's record away from him.”

On Sept. 24, Ruth reached his goal by hitting his 50th homer off Jose Acosta of the Washington Senators. It was a typically majestic Ruthian blast that ricocheted off the grandstand roof in right field of the Polo Grounds and bounded back toward the infield, sending fans “blazing into hysteria.” Baseball writers were convinced they had seen a once-in-a-lifetime milestone:

- New York American: “The crowd went quite mad. They had witnessed something no other people had ever seen before. Perhaps no one now living will ever see such a thing again.”

- Chicago Tribune: “Such batting as Babe Ruth has done this season never before has been accomplished. Perhaps it never will be accomplished again — if Babe Ruth does not do it.”

- New York Times: “[Ruth] placed himself upon a pedestal in the baseball world from which no landlord living can evict him. … Ruth has hit almost as many home runs as Heinz has pickles.”

Ruth finished the year with 54 home runs, an 86 percent increase from his record-setting 1919 total of 29. Ruth out-homered every other team in the American League, the first time that had ever happened (and one of two times, along with 1927, that Ruth would accomplish the feat. No one else has ever done it.) He homered in every AL ballpark. He homered off 35 different pitchers.

In addition to his celebrated home run mark, Ruth set an iconic standard with an .847 slugging percentage that stood as baseball's single-season record for the rest of the 20th century. Looking at his numbers using modern sabermetric measures, his OPS+ of 255 — which means his on-base-plus-slugging was an astounding 155 percent better than the league average — also remained the major league record for more than 80 years. 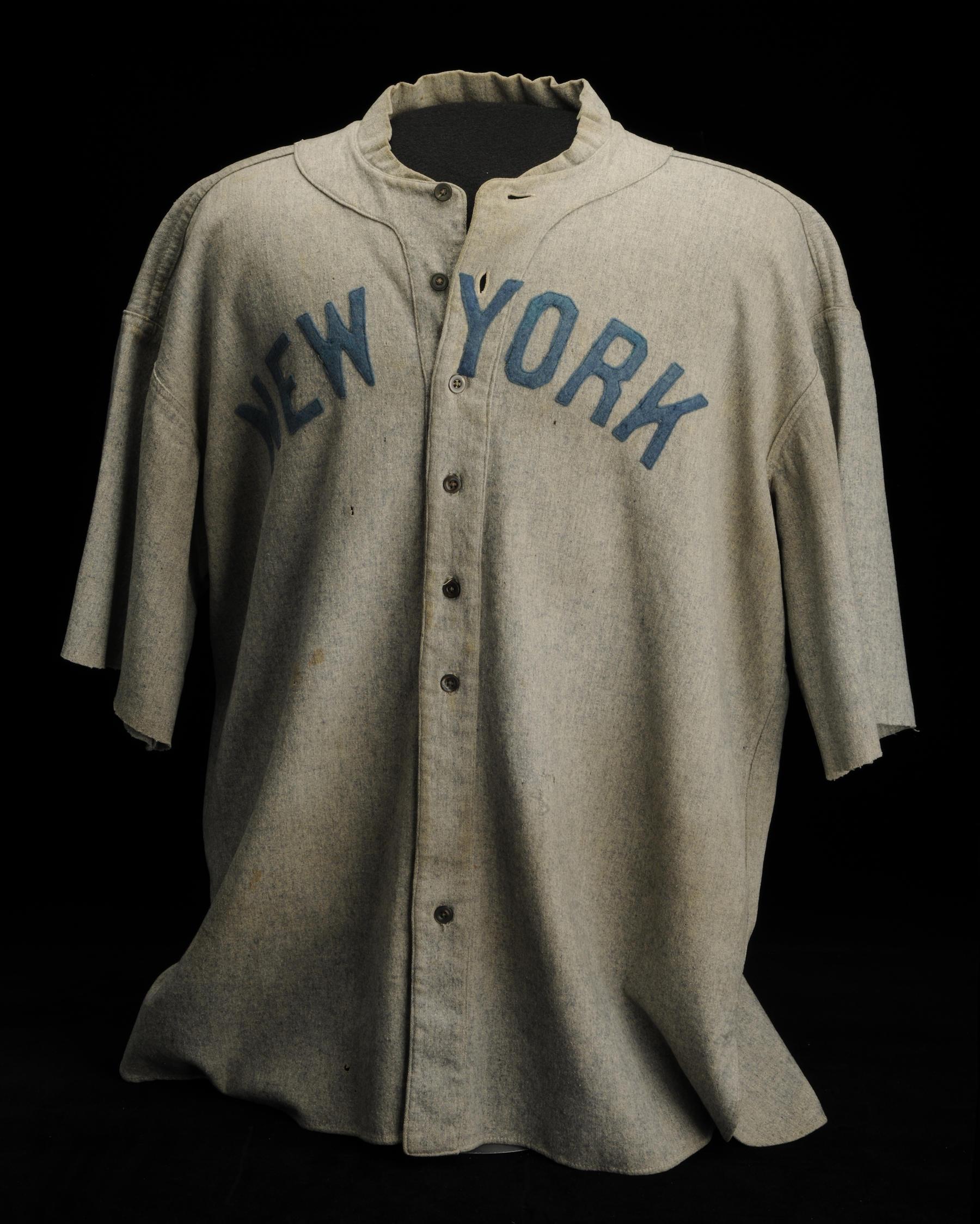 Yet, unbelievably, most of those records didn't even last for one full season. As acclaimed biographer Robert Creamer wrote, Ruth “improved in everything” in 1921. Even the Babe could not have set that high of a goal for his encore performance.

On July 18, 1921, Ruth smashed another milestone with his 139th career home run, breaking the all-time record of 138 set by 19th-century star Roger Connor, a future Hall of Fame first baseman. Ruth’s mammoth home run off Detroit Tigers rookie left-hander Bert Cole flew all the way out of Navin Field, and was estimated by historian Bill Jenkinson to be the longest home run ever hit at approximately 575 feet.

Every home run Ruth hit for the next 14 years, from then until the end of his career, established a new major league record. He wasn't just breaking records, he was destroying them — including his own.

Nearly a century later, Ruth's 1921 totals of 177 runs, 457 total bases and 119 extra-base hits all remain modern-era major league records. Considering just how dominant Ruth was in his first two years with the New York Yankees, it’s almost more difficult to believe that any of his records have been broken. Ruth's peers found it hard to comprehend that anyone else on the planet was capable of equaling the Babe's performance.

“I wish someone would describe to me just the kind of batter [coming] along in 1940, or maybe 1999, who will take Babe Ruth's record away from him,” Cleveland Indians catcher Chet "Pinch" Thomas told Baseball Magazine in 1920. “If he ever happens he will be some freak. It would take a man 7 feet tall, weighing 300 pounds and able to lift a piano with either hand to drive a baseball any further than Babe Ruth can drive it.”

Some of Ruth's records set in 1920 and '21 would eventually fall, to the likes of Lou Gehrig, Ted Williams, Mark McGwire, and Barry Bonds. But no batter has dominated his era quite like the Bambino.

Jacob Pomrenke is the Society for American Baseball Research's web content editor/producer at SABR.org and lives in Scottsdale, Ariz.