Ball caps for the Black Sheep

Part of the SHORT STOPS series
Written by: Ken Roussey

October 1943 saw an anticipated World Series rematch from the previous year between the New York Yankees and the St. Louis Cardinals. Inevitably, though, World War II weighed on the hearts and minds of many – and not even the National Pastime could escape the impact of the war.

The series took on an unusual 3-4 game format that year due to wartime travel restrictions, giving New York the first three games at home and St. Louis the remaining four, if necessary. In addition, each team’s roster was depleted. For the Yankees, Joe DiMaggio, Phil Rizzuto, Red Ruffing and Buddy Hassett were absent, while the Cardinals were without Johnny Beazley, Creepy Crespi, Jimmy Brown, Terry Moore and Enos Slaughter. This set the stage for a World Series with a much different feel.

Meanwhile, halfway across the globe, a seasoned and colorful Marine Corps Major named Gregory “Pappy” Boyington was leading a group of fearless and daring airmen in the South Pacific. The group of combat pilots were Marine Fighter Squadron 214, better known as the original Black Sheep Squadron. Formed in August of 1943, the Black Sheep Squadron consisted of a mix of experienced combat veterans and new substitute pilots who were left to rely almost entirely on the training and skill of Boyington. The squadron, which started out as an impromptu group of replacements, was, in a matter of weeks, transformed by Boyington into one of the most elite groups of air fighters in military history.

In the fall of 1943, while war was on the minds of countless baseball fans, baseball was evidently on the minds of Pappy Boyington and his Black Sheep Squadron. In order to resolve a shortage of baseball caps, which were very popular among Marine airmen in the South Pacific, Boyington and his men reportedly made an unusual offer to Major League Baseball. The story goes that the airmen agreed to shoot down one enemy plane in exchange for every ball cap they received from players in that year’s World Series. Sure enough, upon conclusion of the World Series, the St. Louis Cardinals sent 20 baseball caps along with a few bats and balls to the Black Sheep Squadron. This photo shows 20 original members of the squadron sporting Cardinals caps while posing on the wings of one of their Corsair fighter planes. 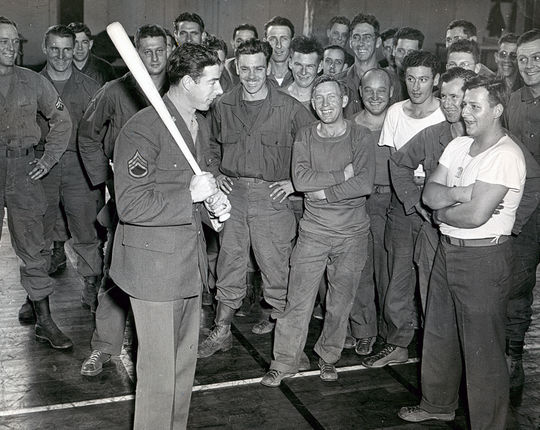 Staff Sgt. Joe DiMaggio at Camp Kilmer, N.J. The camp served as a major transportation hub for troops going to and coming back from overseas. DiMaggio was temporarily assigned to the camp for ten days, January 9-19, 1945. According to The New York Times, he assisted “in the development of the sports program.” DiMaggio was one of many missing regulars from the Cardinals and Yankees during the 1943 World Series. BL-552-91 (National Baseball Hall of Fame Library) 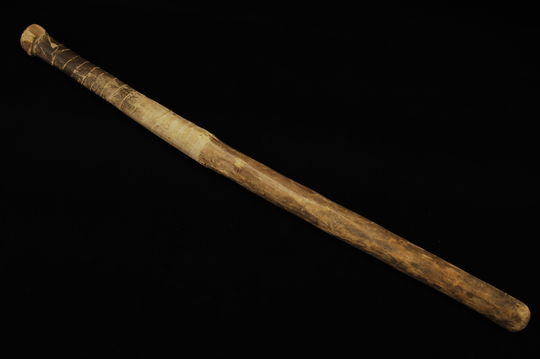 Bat used to play baseball by American internees at the Grand Hotel in Bad Nauheim, Germany in 1942 during WWII. Under the eyes of Nazi Gestapo guards, U.S. Embassy Officials, diplomats and the press, the internees fashioned the bat from a tree limb with a knife during their five-month detainment. Baseball was a way that millions remained connected to home while serving abroad. B-33-91 (Milo Stewart, Jr. / National Baseball Hall of Fame) 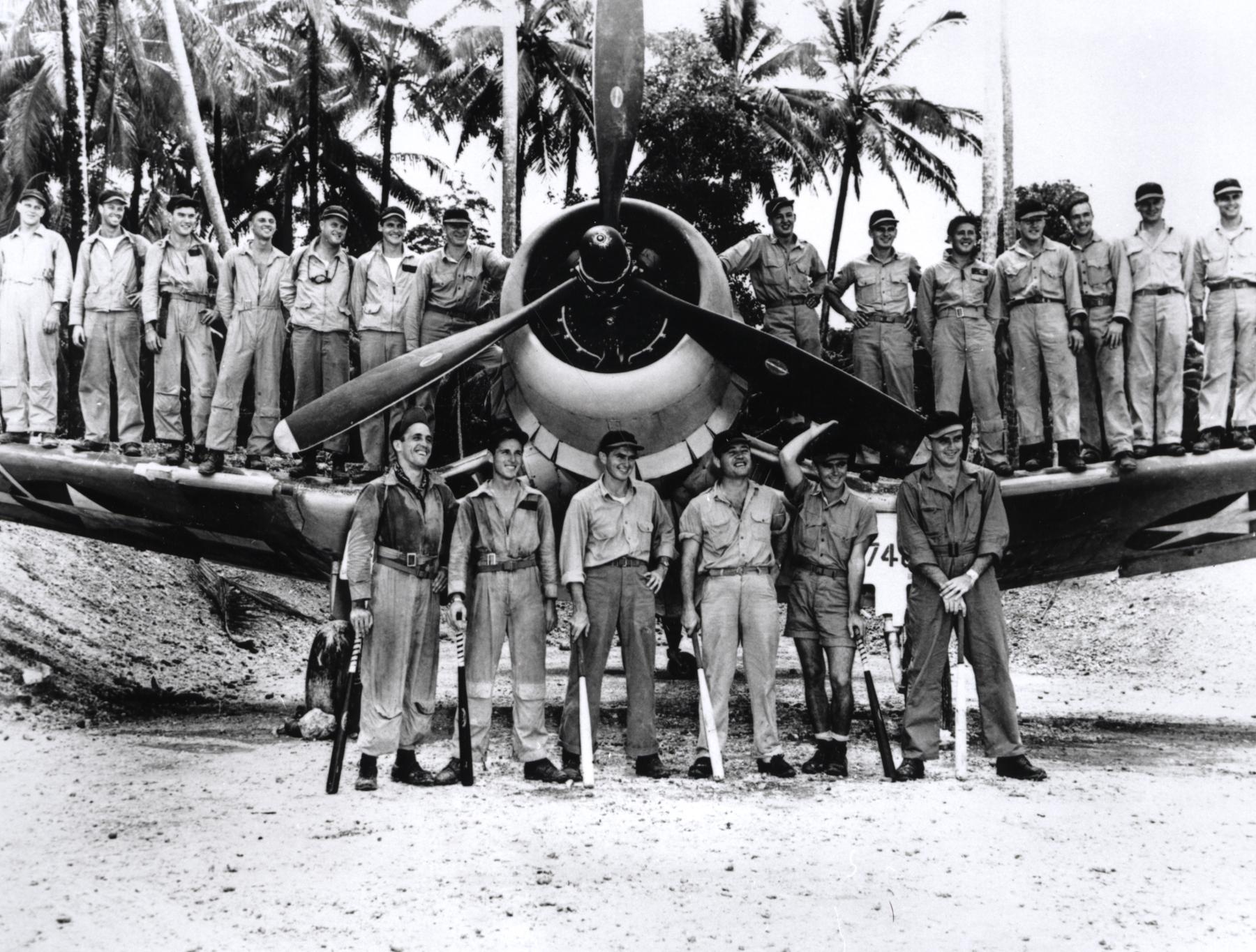 The Black Sheep Squadron poses while wearing the ball caps donated to them by the St. Louis Cardinals, 1943. BL-10821-94 (National Baseball Hall of Fame)

In return for the caps, the Black Sheep made good on their end of the bargain. Instead of taking down just 20 enemy planes, though, the members pictured here accounted for 48 enemy planes destroyed.