"They did what they said they would, but I was disappointed in the reaction."

At least four major league teams scheduled tryouts for Negro leagues players before Jackie Robinson signed with the Dodgers. All of these tryouts occurred because of newspaper activism. For example, due to pressure from the Daily Worker, the Pittsburgh Pirates announced a tryout in July 1942 with candidates to be selected by Wendell Smith. By the end of August, the Pirates quietly abandoned this pursuit. Sportswriter Joe Bostic surprised the Dodgers at a spring training practice in early April 1945 by demanding a tryout for two Negro leagues players. The Dodgers held the tryout, but did not sign either man. Also in April 1945, Smith arranged tryouts for black ballplayers with the Boston Braves and Boston Red Sox. Smith orchestrated an alliance with Isadore Muchnick, a Boston politician running for re-election in a predominantly black district. Muchnick threatened a Sunday baseball ban over the Boston clubs unless they held tryouts before the 1945 season. Eddie Collins, Red Sox general manager, begrudgingly agreed to the tryout, as did the Braves. Although both clubs set dates and invited Smith to help organize, they both consistently delayed the tryout dates, citing a multitude of excuses.

The Braves never actually held their tryout, but the Red Sox eventually did. On April 16, 1945, shortstop Jackie Robinson, second baseman Marvin Williams, and outfielder Sam Jethroe all took the field at Fenway Park. Smith and Isadore Muchnick observed the tryout from the stands, and if Eddie Collins observed, he did so away from the field or stands. Smith was not surprised that no signings emerged from this tryout. Neither Boston club extended the courtesy of notifying these young black players of their decision, with Jethroe remarking to Smith: “We’ll hear from the Red Sox like we’ll hear from Adolf Hitler.” Smith had to write the Red Sox to discover the outcome. Collins responded that the Red Sox would not be signing Robinson, Williams, or Jethroe, citing an injury to manager Joe Cronin and concerns over Negro league contracts. 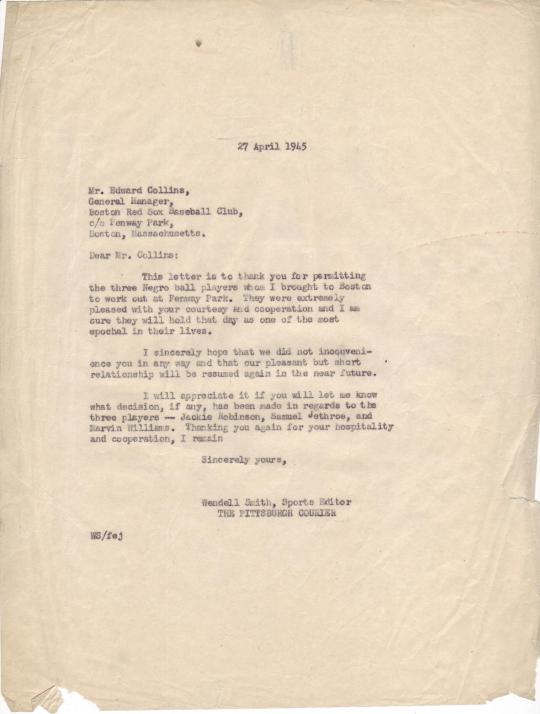 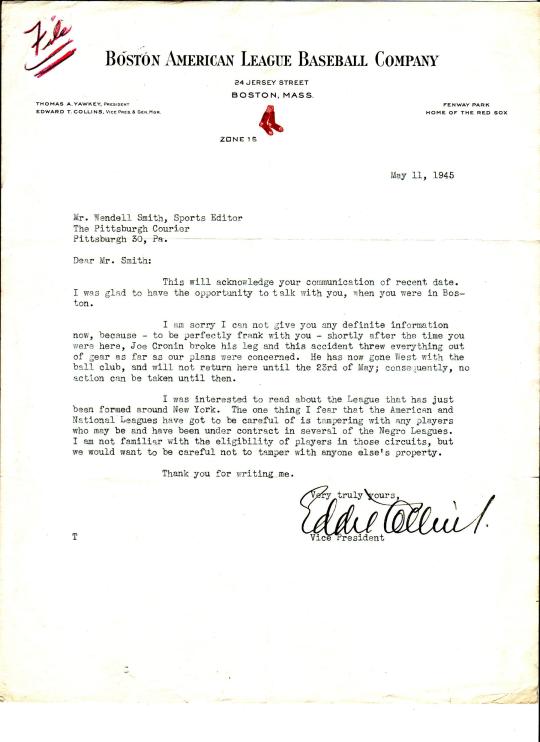 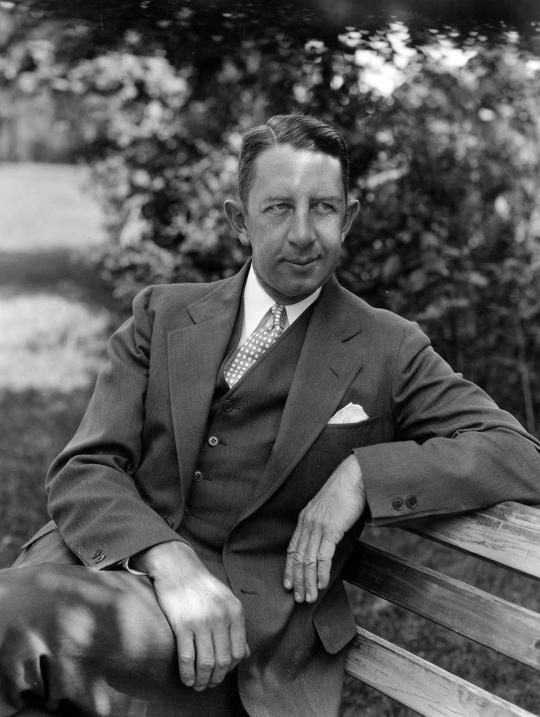