As card collectors, we tend to assume that the photograph for each card is taken during the previous season. For most cards, that’s how the schedule works, but back in the 1960s, the lack of available photographs sometimes forced the Topps Company to forage deeper into its archive.

Gene “Stick” Michael’s 1969 Topps card shows a capless Michael with the designation of the New York Yankees, even though he’s clearly wearing the black and white sleeveless uniform of the Pittsburgh Pirates, a team that he hadn’t played for since 1966. So why did Topps use such an old photograph? It had to do with a financial dispute. Due to a disagreement with the Topps Company over compensation, the Major League Baseball Players’ Association told all of its members not to pose for baseball card photographs in 1968. As a result, Topps did not take any photographs of players during the ’68 season, including Michael. Topps had no choice but to use an older photograph of Michael, one that still showed him with the Pirates. 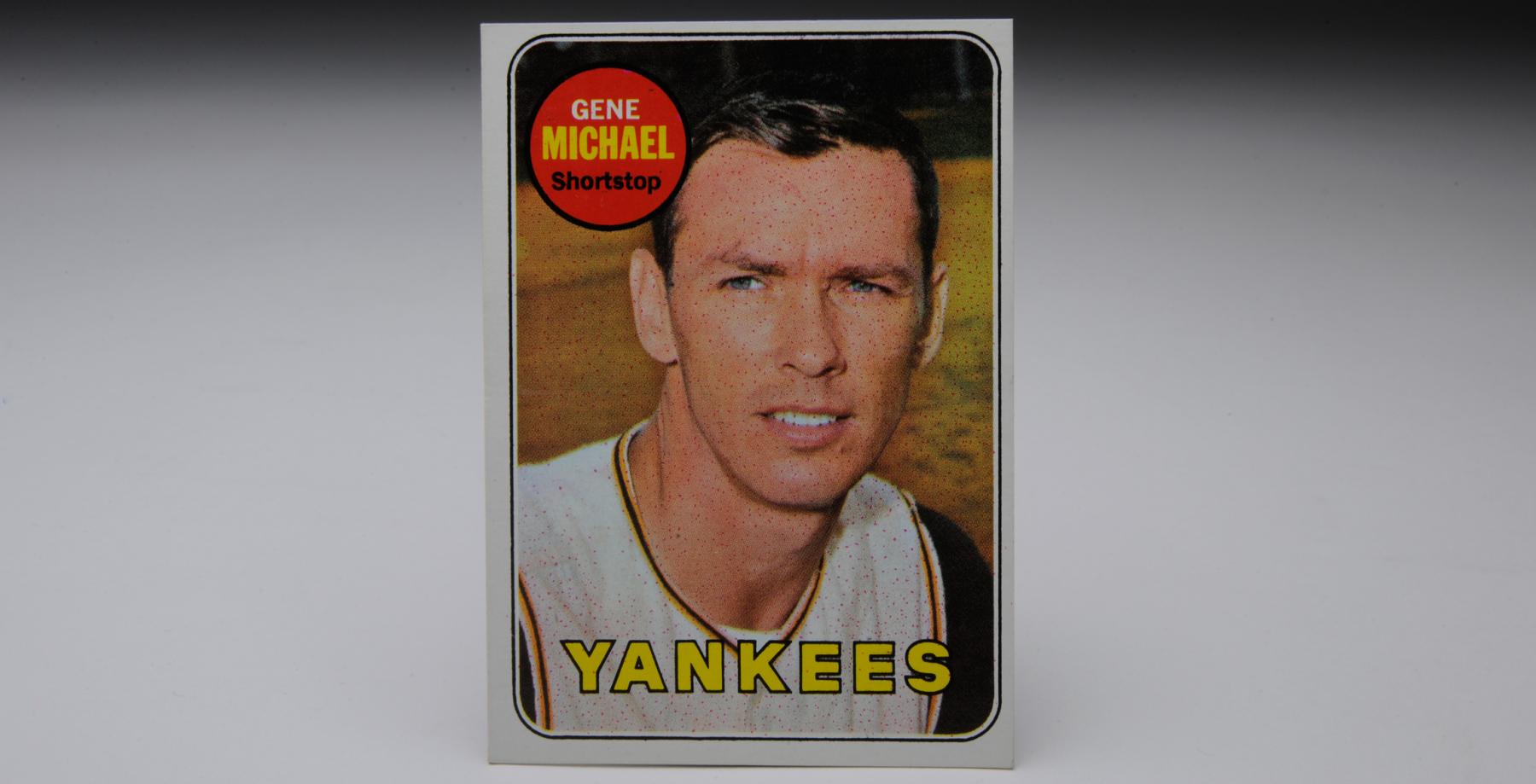 Playing for three teams in three seasons epitomizes the life of a well-traveled journeyman, especially in an era when players had no control over where they played. Given such movements, we can understand if Michael looks a little bit confused on his 1969 Topps card. More importantly, Michael’s move to New York, which actually occurred prior to the 1968 season, helped change his career for the better, first as a player and then as one of the game’s most astute general managers.

At one point, Michael seemed destined for a career in the NBA. A star player at Kent State University, Michael drew the interests of several NBA teams, but he opted for baseball instead. Michael began his major league career with the Pirates, where he failed to gain traction, hitting only .152 during a 1966 trial run. That winter, Michael was traded (along with slugging third baseman Bob Bailey) to the Dodgers for noted 1960s speedster Maury Wills.

Michael did the job defensively, but his continuing offensive struggles convinced the Dodgers to look elsewhere. After the 1967 season, the Dodgers sent Michael to the Yankees for the sum of $30,000. With New York, Michael eventually replaced Tom Tresh as the starting shortstop. Like many shortstops of the 1960s, Michael didn’t hit much, but he could field the position with a smoothness and efficiency that the Yankees hadn’t seen since the prime years of Tony Kubek. Simply put, Michael could pick it.

It was during his Yankee years that Michael established himself as a practitioner of the hidden ball trick. With the runner at second base thinking that the pitcher already had the ball, Michael would blithely move toward him and then place a tag on the unsuspecting runner before showing the ball to the umpire. It’s a play that major leaguers seldom pull off in today’s game, but Michael did it with a stunning degree of frequency. Considering that the hidden ball trick relies on heavy doses of deception, it’s remarkable that Michael was able to execute it five times, making him the master of the hidden ball trick. His hidden ball “victims” included Detroit’s Tom Matchick (1968), Minnesota’s Zoilo Versalles (1969), Oakland’s Joe Keough (1970), Jarvis Tatum of the Angels (1970) and Texas’ Vic Harris (1973). 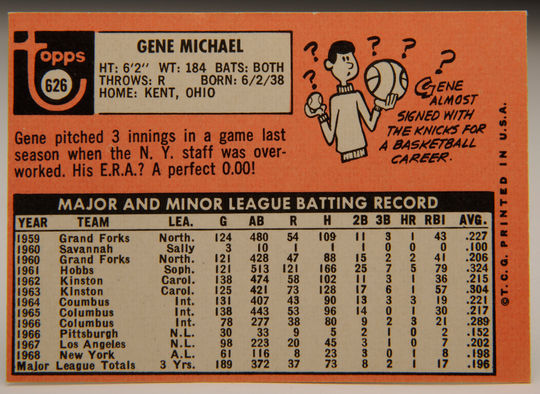 The hidden ball trick epitomized Michael’s intelligence. He didn’t have the talent of a star, possessing little power, only average speed, and an overall gawkiness that came with his rail-like frame of six feet, two inches, and a mere 180 pounds. Yet, he was surprisingly athletic, enough to have starred in basketball at Kent State, where his lean look earned him the nickname of “Stick.”

As a major league shortstop, Michael made up for his lack of footspeed and arm strength with good hands and quick feet, and by studying the tendencies of opposing hitters and baserunners. How good was Michael defensively? He was a poor man’s Mark Belanger, which represents high praise given Belanger’s extraordinary defensive skills as the starting shortstop for the Baltimore Orioles. Like Michael, Belanger was tall and thin, and sometimes appeared overmatched at the plate. But Belanger was arguably the best defensive shortstop of his era, so it’s no insult to put Michael behind him in a listing of the top fielders of the 1960s and seventies.

After struggling in a part-time role with the Yankees in 1968, Michael served the club well as the starting shortstop from 1969 to 1973, often teaming with double play partner Horace Clarke at second base. But age and injuries began to catch up with Michael in 1974. The following January, the Yankees gave the 36-year-old Michael his unconditional release. About 10 days later, he signed with the Detroit Tigers, where he played sparingly for Ralph Houk, who had been his manager in New York.

Michael lasted one season in Motown, drawing his release that October. In February of 1976, Stick signed with the Yankees’ rivals, the Boston Red Sox, but at first earned only a minor league assignment. The Red Sox eventually promoted Michael, allowing him to earn some time toward his pension, but he never did appear in an actual game for the Red Sox. In May, the Red Sox released Michael, halting his major league career.

With his playing days over, Michael quickly embarked on his second life in baseball. George Steinbrenner, remembering Stick as one of the original Yankees from his first year as owner of the franchise, gave him a job as a coach. From there Stick became a front office executive and then a two-time Yankee manager, serving separate stints in 1981 and ’82. Like all Yankee managers of that era, Michael was fired. He left the organization to manage the Chicago Cubs, where he didn’t see eye to eye with his new boss, Dallas Green.

After a brief respite from the tumultuous atmosphere surrounding the Yankees, Michael eventually returned to the Bronx. In 1990, the Yankees, by now a struggling team in need of major rebuilding, made one of the most important moves in franchise history. They hired Michael as general manager. I was working as a sports talk show host at the time; I remember being critical of Michael, who seemed unwilling to pull the trigger on big trades. Well, Michael knew a lot more about constructing a ballclub than I did. He set out to rebuild the Yankees’ farm system, while resisting the temptation to trade what few prospects the organization had in exchange for quick-fix veterans. 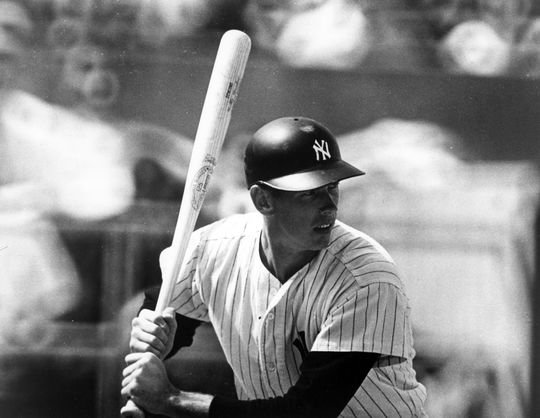 Michael’s calm, even-handed approach served the Yankees well. He also had the kind of long-term vision that any floundering franchise needs. Under Michael’s stewardship, the Yankees drafted or signed the following players: Jorge Posada, Andy Pettitte, and two fellows named Derek Jeter and Mariano Rivera. In other words, Michael was responsible for bringing in every member of the team’s celebrated “Core Four.” That’s probably enough of a testament to Michael, but let’s consider that he also signed established veterans like Mike Stanley, Wade Boggs, and Jimmy Key as key free agents. Boggs and Key would become major players for the Yankees during their return to the postseason.

When Michael did decide to make a trade, he made a huge impact on Yankee fortunes. In November of 1992, Michael executed one of the most pivotal moves for the franchise’s future. He sent Roberto Kelly, one of the team’s two young center fielders, to the Cincinnati Reds for Paul O’Neill. It was a controversial deal, to say the least. Kelly was two years younger than O’Neill, who was certainly a good player in Cincinnati, but one who had already turned 30 and had appeared to reach his ceiling. 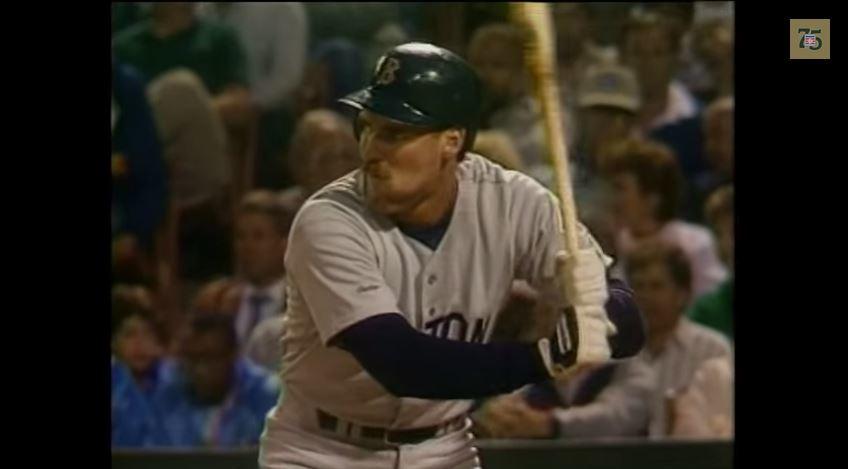 Again, Michael knew what he was doing. He realized that Kelly, who lacked patience at the plate, was not as skilled as Bernie Williams, the team’s other center fielder. He also sensed that O’Neill could blossom as a left-handed hitter at Yankee Stadium playing for a young and driven manager like Buck Showalter. Stick was right on both counts.

In later years, Michael made other critical deals. He acquired closer John Wetteland, a key part of the 1996 world championship team, for an obscure minor leaguer named Fernando Seguignol. Michael also picked up standout starter David Cone in a trade for three minor leaguers who never did develop in the major leagues.

With all of the aforementioned vital pieces in place – including a catcher, a shortstop, a right fielder, two starting pitchers, and a closer – Michael left a championship nucleus for his two successors as general manager: Bob Watson and Brian Cashman. With the framework set by Michael, the Yankees would win four world championships and five pennants from 1996 to 2001. 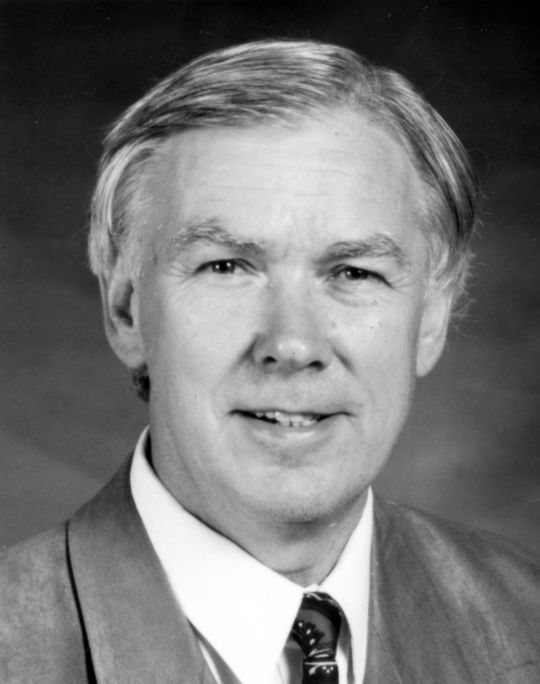