Eye of the Beholder

If baseball is an art as opposed to a science, then it’s no wonder the art of baseball can be found in Cooperstown.

The National Baseball Hall of Fame and Museum is the permanent guardian of more than 1,700 works of art and the collection is a valuable asset in terms of its historical and cultural relevance. Artwork in the Hall’s collection includes painting, sculpture, watercolor, drawing, print, ceramic, fiber, photograph, glass, along with mixed and multi- media. Numerous mediums are utilized and many well-known players from the 19th century to the present day are depicted along with representations of ballparks, equipment and play on the field.

Artwork contained in the Hall’s permanent collection has been acquired since 1936 through generous donations from individuals and bequests and is as varied as the game itself. The Museum welcomes donation proposals throughout the year to augment the exhibition program. 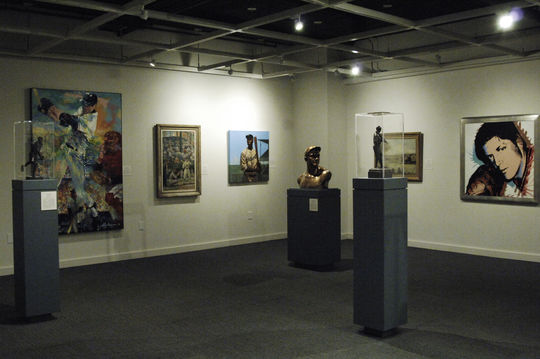 A view of the "Art of Baseball" exhibit. The Christy Mathewson bust can be seen in the center of the photograph while the Tom Seaver painting is on the far right. (Milo Stewart, Jr. / National Baseball Hall of Fame) 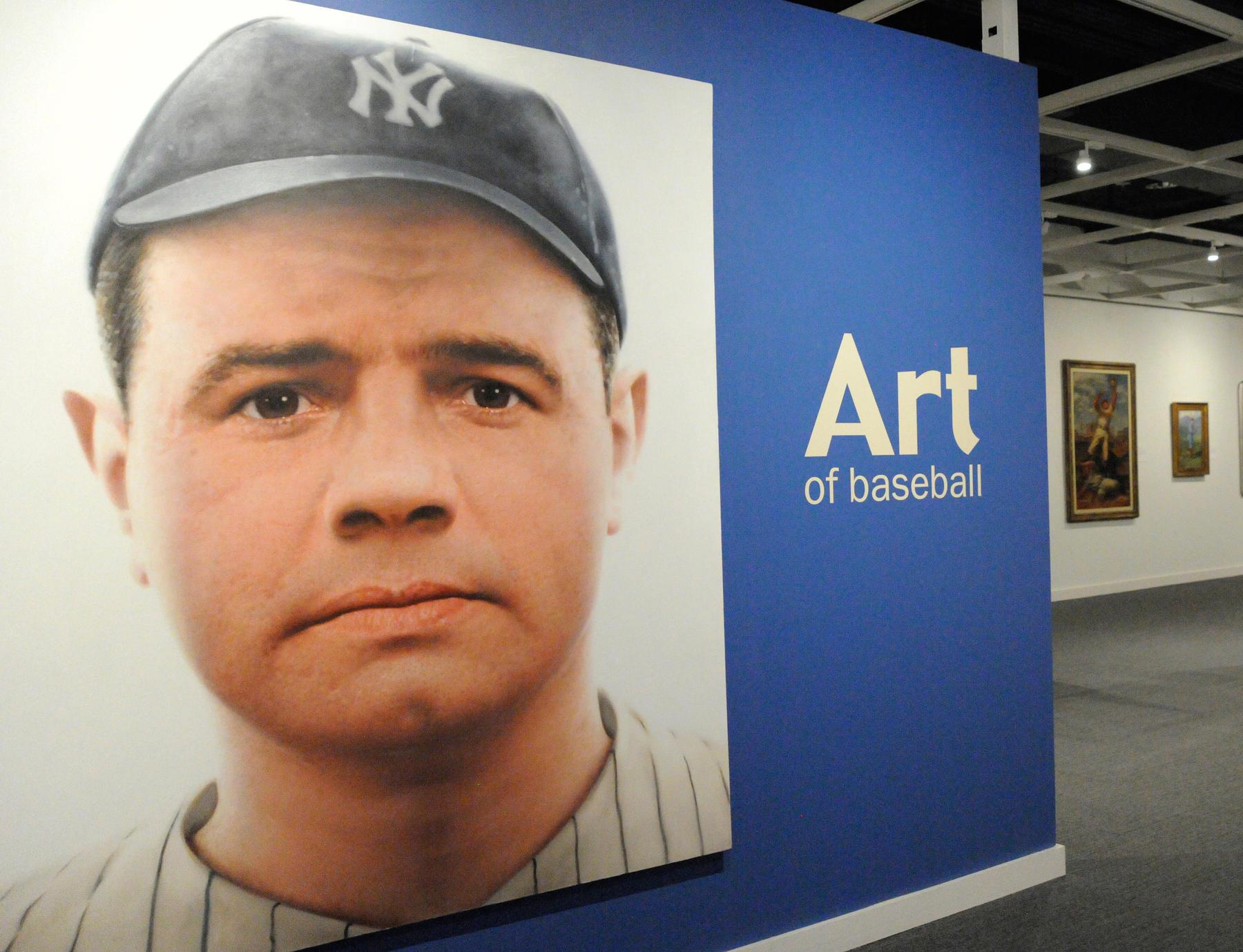 This painting of Babe Ruth by the artist Rossin hangs in the Museum’s Art Gallery, welcoming visitors to a world of baseball and artistry. (Milo Stewart, Jr. / National Baseball Hall of Fame)

The mission of the Museum is to collect, care for, preserve, study and make accessible a vibrant and rich collection of visual art. The art collection supports the Hall of Fame by contributing to the special character and cultural vitality of the institution; playing an important role in the study, understanding and creation of knowledge about baseball through visual arts, and developing an excellent collection accessible to visitors, scholars and the community for teaching, research and enjoyment.

The following pieces represent some all-time favorites along with some new acquisitions to the collection: 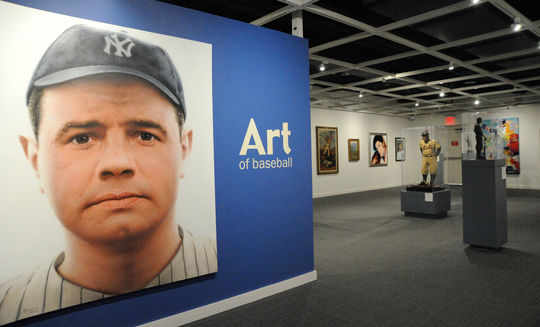 1949 by Norman Rockwell. In one of Rockwell’s best-known baseball images, umpires Larry Goetz, Beans Reardon and Lou Jorda assess whether to stop a game due to the rain. As the umpires make their decision, Brooklyn coach Clyde Sukeforth and Pirates skipper Billy Meyer have their own disagreement about whether to proceed.

2011 by Roni Stretch. Both a skilled athlete and a gifted artist, British-born painter Roni Stretch creates photorealistic artwork. While his artistic abilities were recognized at an early age, Stretch found rugby to be more acceptable in his working-class neighborhood. After moving to the U.S., he began pursuing his art career. In Eli’s Glove, he explores his new country’s national pastime with the use of a child’s glove.

1937 by Jared French. Jared French takes artistic license with the Polo Grounds and its famous geographic feature Coogan’s Bluff. To provide additional visual appeal to the background, French moved the bluff to the outfield from its actual location behind the grandstand.

1937. When Mervin Jules first exhibited the painting, Time Magazine praised his use of “restrained luminous color.” According to Jules: “I was collecting studies among the bootleg mines in western Pennsylvania and saw a group of miners on a slag field playing baseball late in the day. They cast a long shadow and it all fascinated me.”

Casey at the Bat

c.1975 by Robert Heindel. Robert Heindel fashioned a successful career as a commercial illustrator and a fine artist even though his only training was through a correspondence school. In the painting, Heindel represents the celebrated Casey, anti-hero of the 19th-century poem “Casey at the Bat,” as he famously strikes out.

2012 by Ross R. Rossin. Born Rossen Raytchev Raykov in Bulgaria, the artist better known as Rossin is acclaimed for his large-scale, photorealistic portraits. His meticulously detailed works have led to commissions from U.S. presidents and other prominent figures in politics, business and entertainment. Rossin painted Babe Ruth, one of the most recognizable icons of American culture. 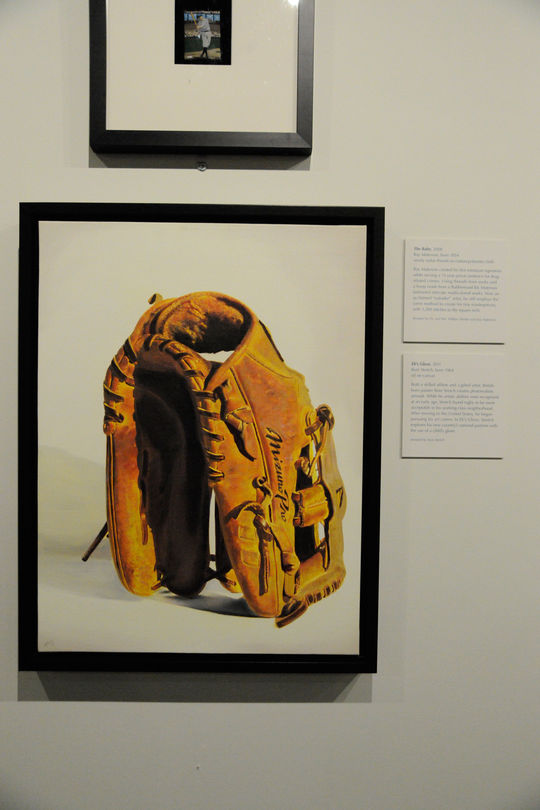 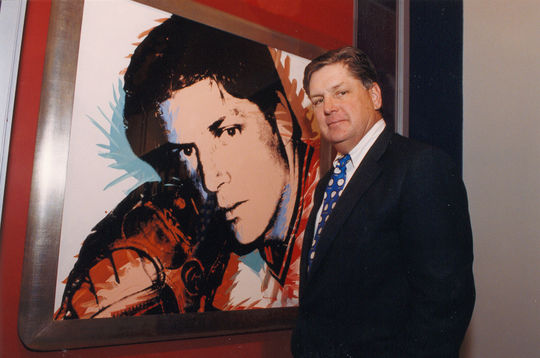 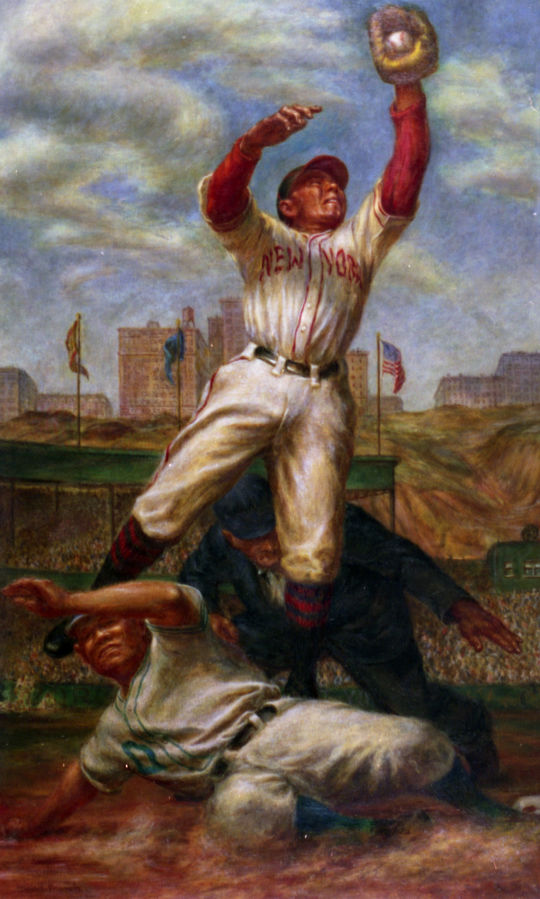 The Hall of Famer

1996 by LeRoy Neiman. According to LeRoy Neiman, “For an artist, watching Willie Mays hit a baseball is an experience far more overpowering than painting a beautiful woman or leading political figure.” Neiman conveys that sentiment with an idealized Hall of Famer.

1922 by Gertrude Boyle Kanno. In choosing Christy Mathewson to depict in bronze, Gertrude Boyle Kanno compared him to the Greek athletes of antiquity. “A baseball player”, she noted, “is every bit as picturesque and dramatic a figure as a discus thrower. What we call classic now was for the Athenians progressive, modern art.

Art is in the eye of the beholder. Visit the Museum to view baseball through an artist’s eye.

The National Baseball Hall of Fame and Museum strives to:

1. Develop a collection of works of art that represent the passion, talent, depth, history and culture which artists have for the game of baseball.

2. Acquire works of art that contribute to the Museum’s mission of preserving history, honoring excellence, and connecting generations.

3. Collect works of art which reflect the nature of baseball and the National Baseball Hall of Fame and Museum.