Do You Know the Muffin Man?

Part of the SHORT STOPS series
Written by: Jim Gates

How many times have you watched a baseball game on television and heard the announcer talk about a player “muffing” a play? Everyone knows what this is, right? It means the fielder made an error, usually on a routine opportunity to get an out. The word “muff” actually makes multiple appearances in the official rules of Major League Baseball.

It is in interesting expression, but have you ever wondered about the origins of this unique baseball term?

Once upon a time, as the old saying goes, in a day when every baseball team was a private club, there were three basic levels of player. The highest level, consisting of those players on the field when winning was important, were know as the “first nine.” This group had a credible back-up unit called the “second nine.” 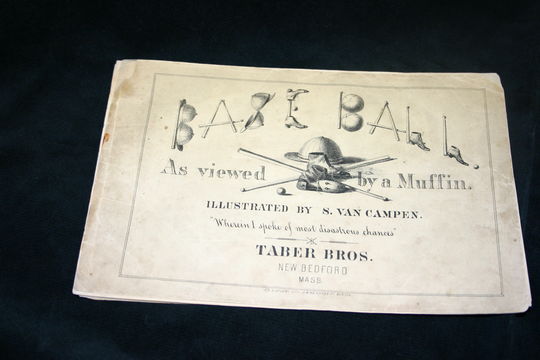 The book "Base Ball as Viewed by a Muffin," by Henry Chadwick BL-1607.75 (Milo Stewart, Jr. / National Baseball Hall of Fame Library)

Then there were the rest of the guys. These were the other club members, those who paid their dues and were in “good standing,” but perhaps not the most skilled players. These men were known as “muffins,” and as muffins they had a tendency to make more errors than the others.

In his classic work from 1868, The Game of Base Ball, Henry Chadwick wrote, “This is the title of a class of ball players who are both practically and theoretically unacquainted with the game. Some muffins, however, know something about how the game should be played, but cannot practically exemplify their theory. Muffins rank the lowest in the grade of the nines of a club, the list including first and second nine players, amateurs, and, lastly muffins.”

Muffins were considered an integral part of the club, and it was not uncommon for a “first nine match” to be followed by a “muffin match.” These muffin-only games were quite popular, receiving avid support from the higher-level players and receiving joint coverage in newspaper stories. According to the Dickson Baseball Dictionary, the word muffin first appeared in print as a newspaper story from the Buffalo Courier in 1857. 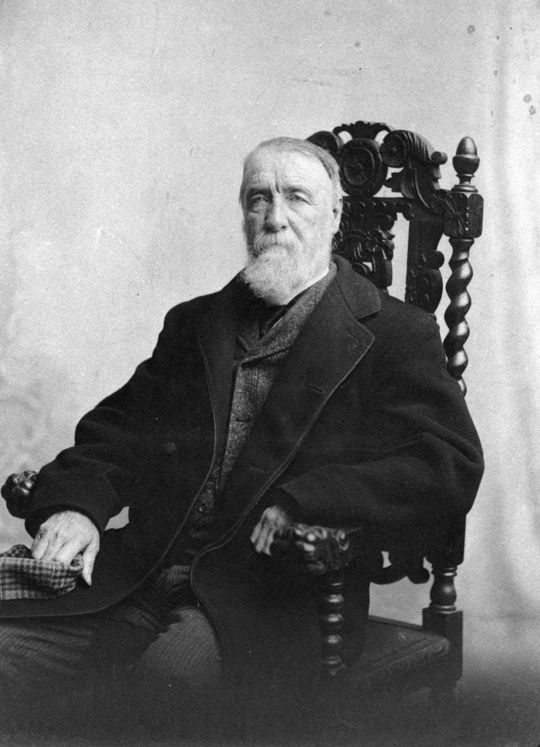 In fact, the word muffin as a baseball term was so common that Base Ball as Viewed by a Muffin was published in 1867. This is one of the earliest illustrated books about our national pastime and few copies exist today. One of those is held in the archive of the National Baseball Hall of Fame and is considered to be among the treasures of the collection.

The role of the muffins and the muffin matches played a critical part in helping baseball maintain its popularity as the game became more competitive and first nine matches more dominant. As noted by Peter Morris in his seminal work Baseball Fever, “The games also served several important functions. First, they kept the club members who lacked the skill to play on the first nine happy and even conferred on them a special distinction. Second, they reminded spectators and players of the sheer fun of playing ball games. Third, they showed that society no longer frowned on displays of unalloyed pleasure. Fourth, they reminded spectators of the skill level of the best players by demonstrating the difficulty of plays that the best players made routinely. Fifth, they allowed a variety of new groups based on occupation, hobbies and marital status to experience the camaraderie that had been so essential to building baseball’s first clubs. Finally, they provided reporters, who described match games in deadly serious tones, with an opportunity to unleash their creative powers. These factors contributed to reviving the sense that everyone was on the same side.”

As Morris noted later in his book, “The muffin games offered biting parodies of the increasing tendency of players to take themselves and the game too seriously…”

What a concept, playing baseball just for the fun of it. Americans may not have muffin matches today, but we have company softball games and family Wiffle balls contests, all which serve a similar purpose. Watching a group of players engage in the game for pure enjoyment was as important in the 1850s as it is today.

Today, we might call the benchwarmers, third-stringers, or even bush leaguers, but the line of succession can be traced back to the lowly muffin. These players were the first to struggle against being lost in the shadow of the better athletes, a struggle that will always be a part of the game, but as noted by Peter Morris, their importance in the early development of the game is critical, and perhaps it is fitting that they are still remembered today – every time an announcer uses the word. 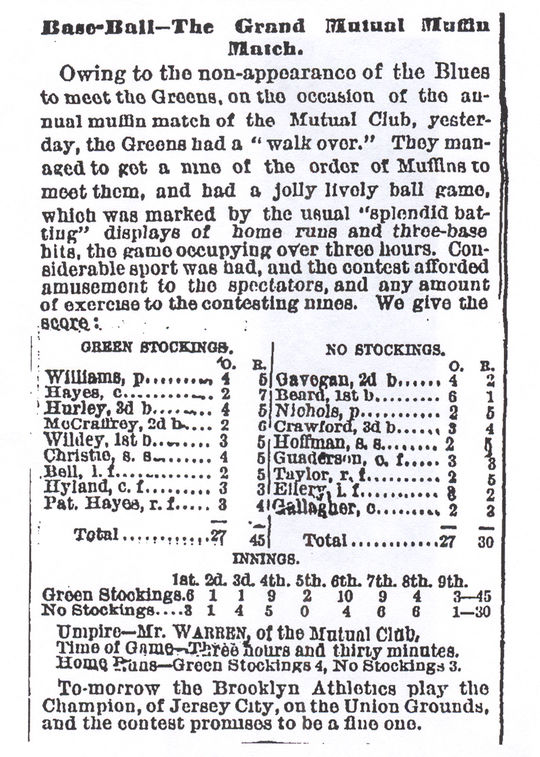 A box score for a "Muffin Match" between the Green Stockings and the No Stockings.