An Englishman whose skill lay in his pen instead of a bat, Henry Chadwick was instrumental in cultivating interest in the new game of baseball among the American people.

As the preeminent writer on baseball for more than half a century, Chadwick developed many of the standards by which we evaluate players and teams today. Most importantly, he translated his passionate love for baseball to the working class population that would go on to play and watch the game.

Chadwick was born in Exeter, England, in 1824 and played ball games like rounders and cricket before moving to the United States in 1837. He was a cricket reporter for The New York Times in 1856 when he witnessed a spirited game of baseball between New York’s Gotham and Eagle clubs. Chadwick later recalled being dazzled by this new game, and recognized the way it reflected the aggressive, high-energy spirit of his adopted nation.

“Americans do not care to dawdle over a sleep-inspiring game, all through the heat of a June or July day,” Chadwick wrote. “What they do they want to do in a hurry. In baseball all is lightning; every action is as swift as a seabird’s flight.”

Chadwick quickly focused his attention to baseball and began writing regular columns on the sport for the nationally read New York Clipper and Sunday Mercury. In 1859, Chadwick formulated his first modern box score, in which he documented statistics like runs, hits, put outs, assists and errors for the dominant Brooklyn Excelsiors club. Additionally, Chadwick recorded the pitchers’ strikeouts, denoting them with the letter ‘K.’

“The box score was the only way of showing the game, there really was no photography,” said Chadwick biographer Andrew Schiff. “So the writer really was the person at the center between the fans and the player at the game.”

Chadwick’s box scores and detailed game descriptions helped Americans follow the sport from home. For the first time, a fan could compare the statistics of one player to another and form their own opinions without having to travel to the ballpark. Additionally, Chadwick introduced the concept of earned and unearned runs and invented the batting average statistic.

Soon, Chadwick’s widely-read columns made him an influential member of baseball’s early rules committees. Beginning in 1860, Chadwick edited The Beadle’s Dime Base Ball Player, in which he listed the first season totals for teams and players and instituted the original framework for how games should be scored.

As Chadwick’s prominence in baseball grew, he used his platform to advocate for dignity and civility among those who played the game. In his columns, Chadwick chastised players and managers who drank and gambled on games.

Chadwick went on to further acclaim as the editor of A.G. Spalding’s Official Base Ball Guide beginning in the 1890s. He later disagreed with Spalding’s claim that Abner Doubleday had invented baseball in 1839, maintaining that the game was a descendant of English ball games that he had played as a boy. Though Spalding’s story originally gained favor in the early 20th century, Chadwick’s version has since proven to hold more weight.

Chadwick continued covering baseball until his final days when a bout of pneumonia he contracted at an Opening Day game in Brooklyn contributed to his death on April 20, 1908.

“By the death of Mr. Henry Chadwick, the game of baseball loses its most prominent figure and staunchest supporter,” Spalding wrote.

Chadwick was elected to the Hall of Fame in 1938. 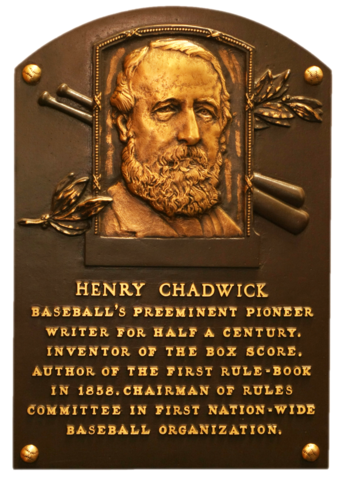 that in 1868, Henry Chadwick wrote the first hard-cover book on baseball, "The Game of Base Ball"?

"Chadwick was an influence for good at a time when the game badly needed such a person. For years he kept pounding away in print on such subjects as the desirability of temperance and the need for fair treatment of umpires, and he lived to see improvements in those and other areas. "
Baseball Hall of Fame historian Lee Allen 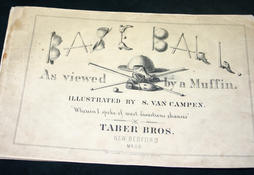 Do You Know the Muffin Man?

Historic book details the origin of one of the game’s most unique words.
Explore more Inductees