While the pyramids of Egypt would hardly qualify as “barns,” they did prove the setting of one of baseball's great barnstorming trips.

Following the 1888 season, the well-respected businessman and former pitcher led a group of 20 National League players on a “round-the-world” barnstorming sweep, visiting eight countries and returning home with just days to spare before the 1889 season. The logistics and travel burdens of such a journey were certainly challenging for the 19th century, but Spalding proved himself the man to take on the responsibility.

Spalding was 38 at the time. A native of Byron, Ill., he had helped support his widowed mother throughout his childhood, took in whatever schooling he could manage and fell in love with the game of baseball. With the birth of the National Association in 1871, Spalding joined Harry Wright’s Boston franchise and emerged as the team’s star pitcher and team captain. Boston won the pennant each year from 1872-75.

An early dose of exhibition baseball on foreign soil no doubt planted the seeds in Spalding’s mind for his world tour of 1888-89. The Bostons toured Canada in 1872 and then went to England in the winter of 1872-73, playing some of the first baseball games ever seen by the Brits. He brought the Philadelphia team with him as opponents.

In 1876, the National Association morphed into the National League, with Spalding helping to draft the new league’s constitution. In April – now wearing a Chicago uniform – Spalding beat Louisville 4-0 in the White Stockings’ first game. He went on to record a 47-13 record in that inaugural season, but with curveball pitching becoming the order of the day – something Spalding never was able to master – his playing days were limited. By the league’s second season, his time as an regular player drew to a close at age 26. He finished his career with a record of 252-65 over seven seasons, leading his league in wins in each of his six seasons as a regular pitcher.

During the 1876 season, Spalding and his younger brother opened a sporting goods store at 118 Randolph Street in Chicago. A.G. Spalding & Bros. took off, with Spalding providing uniforms and baseballs for the National League – buying advertising everywhere to celebrate it. The business thrived.

The following year they added a publishing division, putting out manuals, histories and guides to baseball and many other sports. The company produced baseballs for the American and National Leagues until 1976 and remains one of the best known brands in sports equipment.

In the 1880s, while running his business, Spalding also served as president of the White Stockings, best known for his record-setting sales of King Kelly and John Clarkson. From his vantage point in the game, and sensing the great adventure it could be, he began to conceive his “round-the-world” mission during the 1888 season. But assembling his roster and financing the mission would be challenges.

“To openly ask for volunteers was out of the question, because it would be certain to result in a deluge of applications from undesirable players in the fraternity,” Spalding said.

So he created, in his mind, a list of “All-American” types whose “clean habits would reflect credit upon the country and the game.”

The players would get a $50 week in salary and travel all expenses paid, first class, on what he hoped would be viewed as a paid vacation. Among the players who signed up were Cap Anson, Fred Pfeffer, and Ned Williamson from Chicago, and Ned Hanlon, and John Montgomery Ward for the “All-Americans,” who would serve as Chicago’s opponents. A party of 48 set sail in mid-November following 16 games en route to the Pacific via rail through seven states.

“The welcome given our party on the return home by devotees of the game at New York was one of the great events of the remarkable tour,” Spalding wrote. 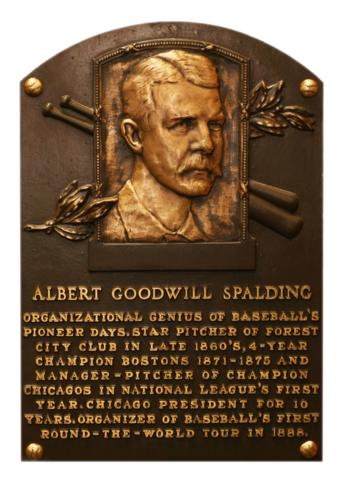 that Albert Spalding led his league in victories in each of the six seasons he worked regularly as a pitcher?

"The first glove I ever saw on the hand of a ball player in a game was worn by Charles C. Waite in Boston in 1875. "
Albert Spalding