King Kelly was not only one of the top players of his day, but he was also one of the most popular.

He played in the late 1870s and 1880s, and during that time he was the biggest drawing card in the sport. Kelly helped the Chicago White Stockings to five pennants – and when he was sold to the Boston Beaneaters for the incredible total of $10,000, fans were so upset that many refused to attend Chicago’s home opener that followed.

The attendance for the opener was abysmal, but when the Beaneaters came to Chicago the fans poured through the gates to see their favorite player, even though he was sporting a rival uniform.

When Kelly played with the White Stockings, he began to study the rules of baseball and tried to figure out ways to get around them. Cap Anson gave Kelly credit for originating the hit-and-run play, and together the two came up with strategies for the sport that are now considered commonplace. Some of the things they worked on were playing off first and third base, adjusting the outfield positions according to the player batting, the double steal and the infield shift.

The outfielder started his career in 1878 with the Cincinnati Reds and was soon given the title of the King of Baseball. He led the league in batting for the first time in 1884, hitting .354 for the season. Kelly won the batting crown once again in 1886, a year that could be considered his best. Over the season, he hit .388 and also led the National League with 155 runs scored and a .483 on-base percentage.

Kelly stole at least 50 bases a season for five consecutive years (1886-90) and swiped a career-high 84 bags for Boston in 1887. In one game he stole six bases, and on multiple occasions he stole five in a game. Kelly was one of the first players to regularly steal third base and home, something he often did in succession.

Kelly won eight pennants with various teams in his 16 seasons in the game and he also hit better than .300 eight times. He led the league three times in both doubles and runs scored, and is one of the few NL players to have scored a record six runs in a game. Though he primarily played right field with frequent appearances in left, in his career Kelly played every position on the diamond, even trying his hand on the mound.

Kelly was also the author of baseball’s first biography: "Play Ball: Stories of the Ball Field," which was published in 1888. 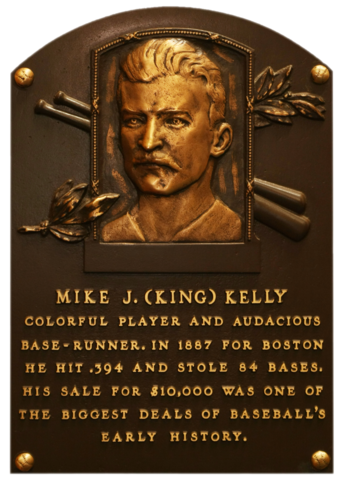 that Mike "King" Kelly was the author of the first baseball autobiography, "Play Ball: Stories of the Ball Field," published in 1888?

"Kelly, in his day, was as popular a figure as Babe Ruth would later be, and there was hardly a boy in the land who did not follow the daily doings of The King. "
Lee Allen, Historian, National Baseball Hall of Fame and Museum