A 20-win season remains the standard for big league pitchers.

But in 1904, Jack Chesbro doubled that number by himself when he won a modern era record 41 games during one of the finest seasons of any pitcher in the history of the game. It was the crowning season of a pitcher whose career numbers added up to a place in Cooperstown.

Born on June 5, 1874 in North Adams, Mass., Chesbro began playing baseball on sandlot teams and earned the nickname “Happy Jack” because of his pleasant disposition. His professional career began in Albany, N.Y., of the New York State League in 1895. At a time when dozens of leagues existed, Chesbro bounced around and even spent time in 1896 as a semi-pro in Cooperstown, N.Y.

In July of 1899, Chesbro was sold to the Pittsburgh Pirates. He won 21 games and led the league in shutouts with six in 1901 as Pittsburgh captured the National League pennant.

In 1902, Chesbro changed his approach and began throwing a then-legal spitball. He described the spitball as the “most effective ball that possibly could be used.” With his new pitch, Chesbro led the league in wins with 28 and shutouts with eight and the Pirates won the pennant again.

“I can make the spitball drop two inches or a foot and a half,” said Chesbro.

Before the 1903 season, Chesbro jumped to the American League and joined the newly formed New York Highlanders. He went 21-15 with a 2.77 ERA in his first season with the club. But it was in his second year that Chesbro had a season for the ages.

Going into the last two games of the season to be played on Oct. 10, Chesbro’s Highlanders trailed the Boston Red Sox by 1.5 games in the pennant race. He took the mound in Game 1 with confidence and an impressive season behind him.

“I’ll pitch and I’ll win,” said Chesbro before the game. “I’ll trim ‘em Monday if it costs an arm.”

But Boston’s Bill Dinneen pitched well, and the score was tied 2-2 in the top of the ninth with the Red Sox’s Lou Criger on third base and Fred Parent at the plate and an 0-2 count.

“It was a passed ball,” said Highlanders manager Clark Griffith of the spitball from Chesbro, officially scored as a wild pitch. “(Catcher Red) Kleinow let the pitch get away from him.”

New York won the second game, but lost the pennant by a game and a half. Chesbro spent six more seasons in New York with some success, but was slowed by an ankle injury. He pitched his final game in 1909, a loss for Boston. 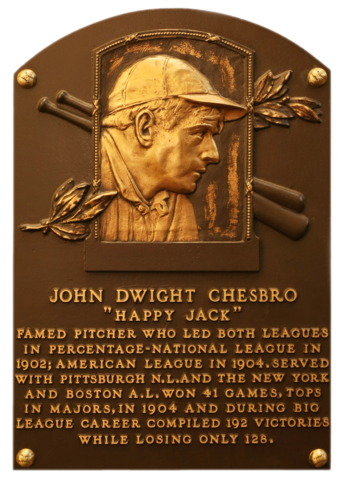 that Jack Chesbro's 41 wins in 1904 are the most by any American League pitcher in one season?

"Luck is just a matter of hustling. I’m lucky because I get out and hustle. Any man with any ability at all can be one of the lucky ones if he digs into the work. "
Jack Chesbro