"One of the grandest guys ever to wear a baseball uniform, one of the greatest batting teachers I have ever seen, one of the truest pals a man ever had and one of the kindliest men God ever created," Casey Stengel said of Wheat.

Born in Hamilton, Mo., on May 23, 1888, Wheat made his big league debut in 1909. He played 19 season in the major leagues, 18 of which came with Brooklyn before finishing his career in 1927 with the Philadelphia Athletics.

At 5-foot-10 and 170 pounds, Wheat batted left-handed and threw right-handed. The outfielder topped the .300 mark in 13 full seasons, led the National League in batting in 1918 and finished with a .317 career batting average. He was also an outstanding fly chaser with a strong arm, leading National League left fielders in putouts seven times and fielding percentage twice.

Wheat spent the first part of his career in the Dead Dall Era and his best season during those years came in 1914 when he hit .319 with 26 doubles, nine triples, nine home runs and 89 RBI.

When the livelier ball was introduced in the 1920s, Wheat made the necessary adjustments and averaged .347 at the plate from 1920-25, recording three 200-hit seasons in his mid 30s. 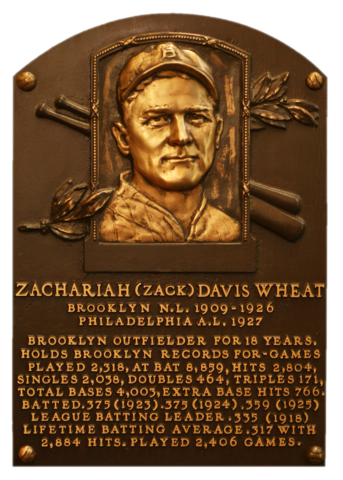 that in 1916, the outfield wall at Brooklyn's Ebbets Field was adorned with the following advertisement for Tanglefoot Flypaper: "In 1915, Wheat, Brooklyn, caught 345 flies. Tanglefoot caught 50,000,000,000 flies." 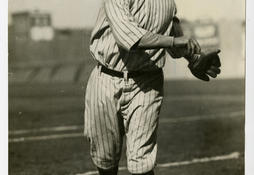 Zack Wheat is elected to the Hall of Fame

With his playing years decades behind him, Zack Wheat was thrust into the limelight again when he was elected to the Hall of Fame in 1959.
Explore more Inductees