Renowned for his blazing fastball, Dazzy Vance was the premier strikeout pitcher of the 1920s. He led the National League in strikeouts for seven consecutive seasons from 1922-'28, and often he led by wide margins.

In 1924, he had more strikeouts than the second- and third-place pitchers combined.

He led the league in wins again the next season, during which he also threw a no-hitter against Philadelphia on Sept. 13, 1925.

Vance's Dodgers never won a pennant, and in 1933 he was traded to the St. Louis Cardinals, where he joined Dizzy and Paul Dean. He was sold to the Reds the following year, but he was waived back to St. Louis in time to win the 1934 World Series as part of the "Gashouse Gang." He finished his career as a reliever back with Brooklyn in 1935.

Vance's career is even more remarkable considering he did not break into the major leagues for good until the age of 31 in 1922. He had spent the previous decade pitching mostly in the minor leagues, though he made nine appearances between the Pirates and Yankees in 1915, and two more for the Yankees in 1918.

Vance was plagued by sore arms during his his 20s but continued to pitch in the minor leagues. He had a strong season for the New Orleans Pelicans of the Southern League in 1921, but at the age of 30, he was far from a hot prospect. But the Pelicans had a catcher named Hank DeBerry whom the Dodgers wanted, so New Orleans offered DeBerry along with Vance in a package deal for $10,000. The Dodgers took the deal, and Vance won 18 games and struck out an NL-best 134 batters as a 31-year-old rookie in 1922, the first of his seven straight seasons leading the league in strikeouts. 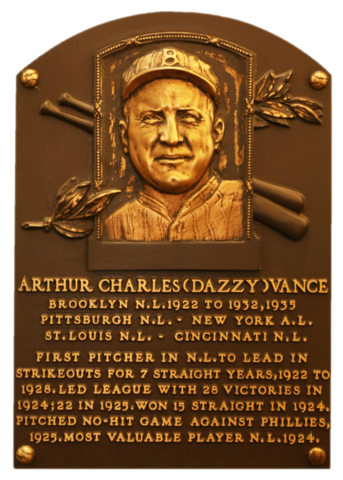 that in 1924, Dazzy Vance had more strikeouts than the second- and third-place finishers in the NL strikeout race combined?

"When the greatest of all Brooklyn pitchers was fogging them over for the Dodgers, the right sleeve of his sweatshirt was an unsightly rag, a flapping thing of shreds and tatters. Daz would hide the ball until the last instant and then if the batter was lucky, he would see something white rocketing toward him out of distracting flutter of dry goods. "
Red Smith 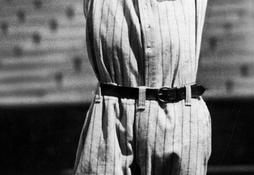 Vance invincible down the stretch in 1925

At 34 years old, Dazzy Vance was the unquestioned king of the mound for the Dodgers in 1924-25.
Explore more Inductees