Victor Gazaway Willis spent only 13 seasons in major league baseball, but in eight of them he won 20-or-more games. He also had 50 shutouts and a 2.63 lifetime ERA, establishing himself as one of the most durable pitchers of his era.

His first season in the game was with the Boston Beaneaters in 1898. He won 25 games that year, and played an important role in helping his team win the pennant.

Willis had his best season in 1899 when he had a 27-8 record and posted a 2.50 ERA. He threw 342 innings for the Beaneaters, leading the National League with the fewest hits allowed per game (7.3) and shutouts (five). He threw a no-hitter on Aug. 7, defeating the Washington Senators 7-1. It was the last no-hitter of the 1890s.

In 1901, the right-hander had a 20-17 record, finishing fourth in the league in ERA with a mark of 2.36. The following season – over the course of 410 innings – he recorded 45 complete games, the most of any pitcher in the modern era (post 1900). His 410 innings represent the second-highest total in modern NL history. He also led the league with 225 strikeouts.

Willis had long fingers, which allowed him to throw a unique and sharp curveball which usually broke downward.

“Willis has speed and the most elusive curves,” the Boston Sunday Journal said. “His ‘drop’ is so wonderful that, if anyone hits it, it is generally considered a fluke.”

From 1903 to 1905, though he collected only 42 wins for Boston, along with 72 losses, his ERA was 3.02 over the three-year span, and twice he posted a mark of under 3.00. The Beaneaters’ offense hurt the pitcher’s stats, with a combined .238 batting average in the three seasons.

When Boston traded Willis to the Pirates following the 1905 season, his value remained high enough that Pittsburgh sent three players in return.

In Pittsburgh, he averaged more than 22 wins a season, and less than 13 losses, consistently pitching around 300 innings a year. During his four years with the Pirates, Willis went 89-46 with a 2.08 ERA. In 1909, Willis went 22-11 winning 11 straight games at one point during the season. He played a key role in the team’s 110 total victories that season, helping the Pirates get to the Fall Classic defeat the Tigers in the World Series. 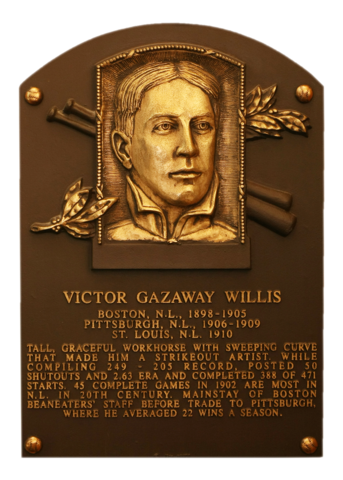 that for pitchers since 1900, Vic Willis holds the National League record for most complete games in a season with 45 in 1902?

"Willis has speed and the most elusive curves. His 'drop' is so wonderful that, if anyone hits it, it is generally considered a fluke. "
Boston Sunday Journal

The Class of 1995 was inducted on July 30 of that year in Cooperstown.
Explore more Inductees